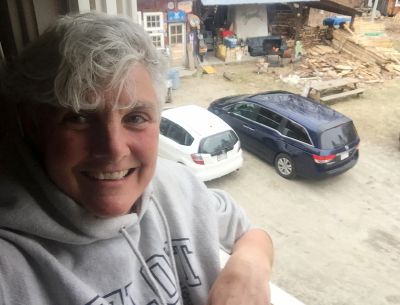 I am the mother of three boys who my husband and I have raised together at our home in Westhampton. They are 26, 22, and 19, and only one still lives at home with us. When the kids were young, our house was the one everyone came to. It was always full, there was always room at the table, always space for one more kid to sleep. I am not trying to paint a picture of that time in our lives as being perfect or stress-free; in fact, I would describe it as the opposite. It was chaotic, full of laughter, anger, tears, and joy. It was a place where we made room for what was happening and then tried to pick up after, literally, when the house was a wreck.

One of the reasons kids came to our house was because of a philosophy I live by as a parent — I called it my pact with the devil. I chose the truth over punishment. That meant I would not put up with anyone, my kids or others, lying to me. If they told me they had done something they were not supposed to, called for help, or got caught, they did not get punished. We talked it through, we asked questions, and discussed what happened. Often, there were natural consequences, like a wrecked car, or consequences from school or other outside influences — but from us, there were none. I am not naive enough to think they always told me everything, but I do know when push came to shove I usually knew enough. My approach was, “I will back you up, but if I walk into a situation and the person I am talking to knows more about the situation and your part in it than I do, I will leave you there.”

It was a tough line to hold and not always the most popular one with other parents. Though I never had conversations with these parents, I know they were out there because there were always kids who were not allowed to come to our house. I think this stemmed from a belief that we were not strict enough or that our rules were blurry. I would not argue this, though I have heard my children say how much the belief that we had no rules bothered them. They knew all too well what our expectations were. I often had conversations in my head of what I would say to the judgment I felt — either real or imagined — from these parents. My answer: I get it…. we are talking about the most precious things in our lives. I chose communication as a tool to keep them safe because it is what I am good at.

I’m not saying it was the best way, but it was our way, and looking back, I have thought a lot about what it did offer. In a time of opioids, alcohol, and teen stress, it meant I often knew where my children were, whose parents were not home, where the trouble spots were, and who was in need of a little extra attention. My children trusted me, and I trusted them — not to not make mistakes, but to tell me when they did.

One time, the kids were planning a party around prom. It was going to be held at the house of a kid whose parents weren’t around a lot, and as the plans grew, I got worried. Finally, I called the police and told them before the event, begging them to not tell the kids where the tip came from. The cops handled it by stopping by the house a couple of days before and giving the kids a warning. That was it — party canceled. That was about six years ago, and just recently, I fessed up, telling my kids it was me who tipped off the police. They were stunned, but the kid whose house it was going to be at was beyond thankful.

Though I struggled with breaking the pact of trust, I have never regretted my decision. My point is, I would not have known about the party at all had I not had the relationship I did (and still do have) with the kids. It was a tricky line to walk. I spent many sleepless nights looking out our bedroom window onto the fire pit below, answering distressed phone calls, and picking up children in the middle of the night — sometimes mine and sometimes other people’s. There are things I have regrets about during that time and things I know I made the right decision about, but mainly I feel relieved to be safely on the other side.