Valley Show Girl: Pamela Means is All That Jazz 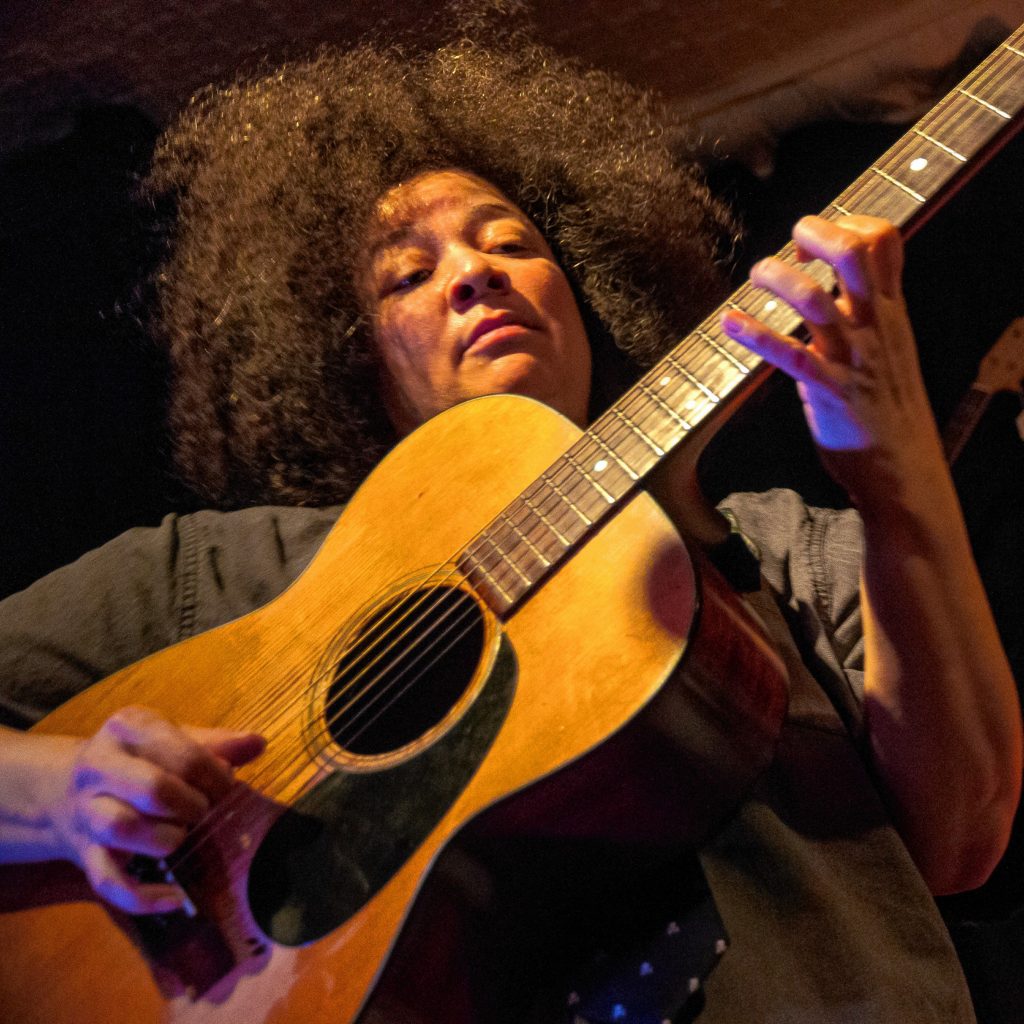 A few weeks ago, before this whole quarantine thing happened, I ventured over to downtown Greenfield to catch what would be my last show for quite a bit. I parked my car just in time to see two people pass my parking spot with medical face masks on. If only I knew then that that would be just the beginning of all this corona-chaos.

I arrived a little early to The Wheelhouse. A speak-easy style small club in the basement level of Hawks and Reed Performing Arts.

I snuck into the corner seat of the long cushioned bench. I noticed as people walked in, they were either solo, like myself, or as a couple. We all pieced ourselves together intermingling in the seats and tables.

I broke away from the puzzle and went to order my local fave, Ginger Libation, then moved over to the bar on the side of the wall that’s wallpapered with old book pages. Moments later, Pamela Means’ jazz trio made it to the underground stage and immediately kicked off the night of jazzy tunes.

They each took turns playing solos, and once the transition turned back to the song, the audience lended their applause to the song making it another layer of sound to mix in with the tunes.

Classic songs were played, but also some originals written by singer-songwriter, Means who is originally from Wisconsin and now living here in the Valley.

My eyes couldn’t help but wander to the wallpapered wall while they played. I had this soothing amazing old school jazz serenading me into lala land while I read random words:

My tapping Adidas against the leg of the chair snapped me out as the next tune was in a little faster tempo.

Goofy banter definitely got me giggling in the audience.

“Coming up here on the 91 corridor to catch some jazz tunes.” Means said in a goofy Bostonian accent. “Tom Brady Weed shop, they got a Gronk special … I’m not even drinking!”

And oh my goodness her laugh. People remark about my laugh. I have a signature cackle. People know I’m at a place if they hear my laugh in the distance, I’ve been told. I’ve been mimicked, I take that as a compliment. Her laugh however is super cute and got me all giggly sitting in my seat up against the wall.

In the intermission, I chatted with Means quickly and got a couple CDs from her which I anxiously awaited getting back to my own personal music space — my vehicle — to listen to on the ride home.

The Milwaukee native studied classical and jazz guitar in her home state and also began a solo singer-songwriter career. She even landed opening gigs for huge acts like Neil Young, Richie Havens, and Violent Femmes. But after playing the same clubs over and over, she felt like she wasn’t getting any further.

“My good friend, Peter Mulvey, also from Milwaukee, had moved to Boston,” Means explained to me in a recent email. “He encouraged me to visit and see the scene for myself. I finally did and I was so blown away and excited by the density of clubs in the metro area, and the density of the population in the region, I finally saw the promise of playing to masses, there and beyond.”

Six months later she moved to Cambridge and began performing at open mics. It later led to a life of national and international touring and living as a full time working musician. “I began to make my dreams a reality,” she said.

She later made the Pioneer Valley her home. “Ignorance and intolerance are certainly everywhere but, for the most part, I live peacefully here in the Valley,” she explained. “That means my elements of self, as an artist, a member of the black and brown community, and as a queer woman, can all coexist. I have traveled far and wide and I have not found many places where each and every one of those identities can thrive and, more importantly, be celebrated.”

Means is currently working on the final phases of her 10th studio album. About a week before the severity of COVID-19 had fully set in, she launched a Kickstarter to help boost some funds for the completion of it.

“I’m extra grateful I launched the Kickstarter just before Armageddon and trust when things return to normal that I can proceed with this album release and play shows later in the year,” she said.

This latest project from Means focuses on her original music, especially the political tunes and has the name “Pamela Means and The Reparations.”

“It’s a powerful thing, even spiritual and transcendent,” Means said, “to have these bold, outspoken originals performed by three black and brown women.”

Cinamon Blair and I-SHEA, both musicians from their other band, Rebirth joined forces with Means for the project. They recorded the songs on the album live in front of an audience at Northfire Recording Studio in Amherst.

“Before the release of this seminal album, I also wanted to think of a band name that had its own distinction, set itself apart, and sounded more special than ‘Pamela Means Band,’” she said, “The name Pamela Means and The Reparations came to me in a flash and it felt just right. I like the bold political stance of it but Reparations also means healing and repair through love and nurturing which is also what I seek to provide this with my music and shows.”

Like every musician in the country, never mind just the Valley, live shows to promote the album have been canceled. Her students that she teaches are transitioning to video classes through Skype and she’s also launching a Patreon page to stay afloat in this crazy time.

“I wish everyone good health and I hope to remain healthy and make the most of extra time to practice! And, write! And, clean? And, meditate!”

If you want to stay up to date on the latest project check out the Kickstarter link, http://tinyurl.com/PamelaMeansAndTheReparations.

Jennifer Levesque writes the bi-monthly column Valley Show Girl, she can be reached at jlevesque@valleyadvocate.com.