Stagestruck: Ghost Lights in the Darkness 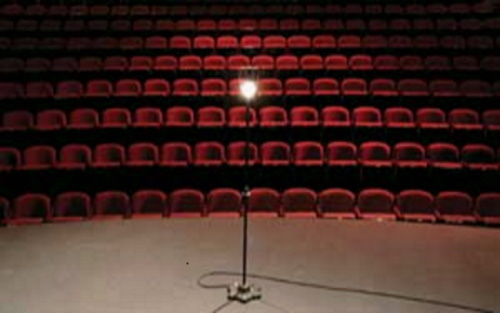 A ghost light is the single lamp that’s left burning onstage when the theater is dark, the audience has gone home and the cast and crew have called it a night. It’s the light that’s on when all the other lights are off.

Ghost lights are shining 24/7 all over the country these days, as theaters, along with most everything else, have closed their doors and can’t be sure when they’ll be able to open them again. Here in the Valley, public performances are canceled for at least another month. Spring productions have either been scrapped or postponed.

The enforced hiatus has hit the performing arts harder than many sectors, since physical proximity is the very nature of live performance – audiences sharing a real-time experience, with the artists onstage and each other. Many organizations, though, are finding creative ways of dealing with this sudden change, experimenting with new media and web-based work-arounds that act not only as placeholders for their live work but extend it, perhaps beyond the current crisis.

Here are some examples.

Happier Valley Comedy’s Scott Braidman told me last week (via email), “It’s been a challenging time, as everything we do is so, so reliant on being present, in the same room, and passing energy and ideas back and forth.” But improvisation is what HVC is all about, so “we’re using our improv training to accept the current reality and move forward with positivity.” On its website and YouTube channel, the company is posting Virtual Mini-Shows, how-to’s with improv games parents and kids can play at home, virtual open mics, and more.

Silverthorne Theater Company is also mounting an online open mic series, with their Greenfield partners the LAVA Center, along with other “Theater Activities for Hard Times,” including invitations to “get on the phone with your favorite singing buddies” to warble Eliza Rubenstein’s witty Gilbert & Sullivan parody, “I am the very model of effective social distancing” (on YouTube and the Web). Meanwhile, the company’s Short & Sweet New Play Festival and monthly new-play reading series have been shifted to summer dates, TBA.

The Northampton Community Arts Trust, home to the Center for the Arts, has closed its building at 33 Hawley Street for now, but has a register of online sources where you can “watch or participate in art making,” and is soliciting additional resources and offers from artists. A.P.E., one of the partner organizations at 33 Hawley, has online offerings, including daily posts by local poets for Poetry Month as well as visuals from current, past and future projects.

Sandglass Theater has suspended performances in its too-intimate 60-seat theater in Putney, VT, and a national springtime tour has been postponed. But the region’s premier puppet theater is “working to adapt to virtual ways of doing our art and staying in touch,” according to Sandglass’s Shoshana Bass. Among these are free, online puppet-making tutorials for parents and children, livestreamed Thursdays at 2 p.m. on their Facebook page.

Turning the lights off can save on utility bills, but the empty seats are taking a heavy toll on the theaters’ human power. Most arts organizations live pretty close to the edge anyway, and this crisis could push some of them over.

Brown Paper Tickets, “the fair-trade ticketing company,” has called on its patrons to “consider contributing to your local arts organizations during this difficult time … because artists, performers, and organizers are in crisis.” Donations from supporters who are not on the financial ropes can help; so can purchasing gift cards or advance tickets to a future event – keeping the faith as well as boosting the bottom line.

Many resources are available for artists struggling to survive. As mentioned above, the Northampton Community Arts Trust’s website features lists of online sources for local artmaking and -watching opportunities, and a link to Creative Capital’s lists of resources for artists and online arts events. The UMass Arts Extension Service also has an extensive list of emergency funding sources, resources for arts instructors, and “ways to enjoy the arts from online,” updated daily. Another source is the Theatre Communications Group, which lists funding for individuals and for teaching artists. Both WomenArts, founded in the Valley as the Fund for Women Artists, and its sister organization, Statera Arts, have links to financial and other resources for women artists.

Locally, Eggtooth Productions has set up a small-grant program to support new artwork in any medium “that may be shared online and that responds to the pandemic in which we find ourselves,” with an emphasis on “experimentation and innovation.” Info and applications for the $250 grants are at Eggtooth.org.

Also in the works at Eggtooth is a new immersive-theater experience by John Bechtold. In the mold of his previous site-based pieces, Promenade envisions a series of audio-guided tours of Valley terrain designed for walking alone or in small distance-keeping groups.

Dwellings, a Northampton-based arts resource, is accepting applications (and donations) for its Western Mass Low-Income Relief Fund for artists, along with links to other resources.

At this point the area’s summer seasons are still on, though one Berkshire theater has cancelled its scheduled May production. Some spring productions are still tentatively on the calendar and some have been moved to the summer or fall.

Gateway City Arts in Holyoke has cancelled all live shows to the end of April but is selling tickets for May and beyond. Take-out food service from the bistro and restaurant in the Holyoke arts hub is planning to reopen sooner.

Ghost Light Theater’s production of the Alison Bechdel musical Fun Home, scheduled to open May 1st at Gateway City Arts, “is in a holding pattern,” according to director Megan Healey. Cast members are rehearsing the music at home and “we plan to get into a virtual hang sometime next week. Gateway isn’t ready to call it, and neither is Ghost Light, yet.”

Serious Play’s year-long development of the ensemble piece Moving Water is moving ahead via Skype, as musician Jonny Rodgers dials in from Oregon to work with playwright Eric Sanders and the cast, scattered around the Valley. Director Sheryl Stoodley said she is “glad to still be devising and not trying to open on any specific date. Artists do not stop – they find other ways to continue.”

K&E Theater Group’s production of the Christian-boy-band musical Altar Boyz, originally slated for mid-April at the Northampton Center for the Arts, is postponed until summer. “Most likely it will be a double header,” director Eddie Zitka told me, “as we also have a fundraiser revue set for July.” Cabaret is still on for October.

Double Edge Theatre’s spring tour ended abruptly in Austin, Texas, when the virus closed the Crashbox artspace there. Back on their Ashfield farm, they’ve begun a podcast series with Monte Belmonte at WRSI The River, Love in the Time of Corona, one-minute poetry bites read by company members and area performers. The troupe also invites locals to come and walk around their 100-acre farm in peaceful isolation.

While the theaters are dark, many videos of live productions are suddenly available for streaming at home. One is Dominique Morrisseau’s Pipeline, a co-production of WAM Theatre and the Nora Theatre Company, which played in the Berkshires last fall and closed prematurely in Cambridge in early March. Sliding-scale tickets are available through April 5th here.

The UMass Fine Arts Center is shifting some of its programming online, beginning at 8 p.m. on April 4th with a free live-streamed concert by Leyla McCalla, whose roots quartet was originally scheduled to perform at UMass that day.

Creative Capital and Theatermania.com have extensive lists of online videos from theaters across the country – and the world. Beginning April 6th, London’s Globe Theatre is free-streaming a different show every fortnight, beginning with its 2018 Hamlet. The Globe also has a broad online catalog of past performances, available for a fee.

National Theatre Live, which has never released any of its ten-year trove of performances from the British stage, is putting up a different freebie each week on its YouTube channel, National Theatre at Home. It starts with the fall-down-hilarious farce that launched James Corden, One Man, Two Guvnors, continuing this month with Jane Eyre, Treasure Island and Twelfth Night. London’s Time Out magazine has published links to more British (and other) shows online, some free, some paid.

And the Wooster Group’s experimental reimagining of Hamlet, “channeling the ghost of Richard Burton’s legendary 1964 performance,” is available free online here through April 7.

Like the rest of the Valley’s live-performance venues, the Academy of Music is illuminated only by a ghost light these days. In a statement to the community, executive director Debra J’Anthony said the Academy, like the others, “exists to tell stories, to bring us together, to explore and celebrate our shared humanity. That sharing is hard right now, especially when remaining apart is what is best for us all. Yet in its own way, that very choice is an act of hope and optimism, a commitment to the future.”