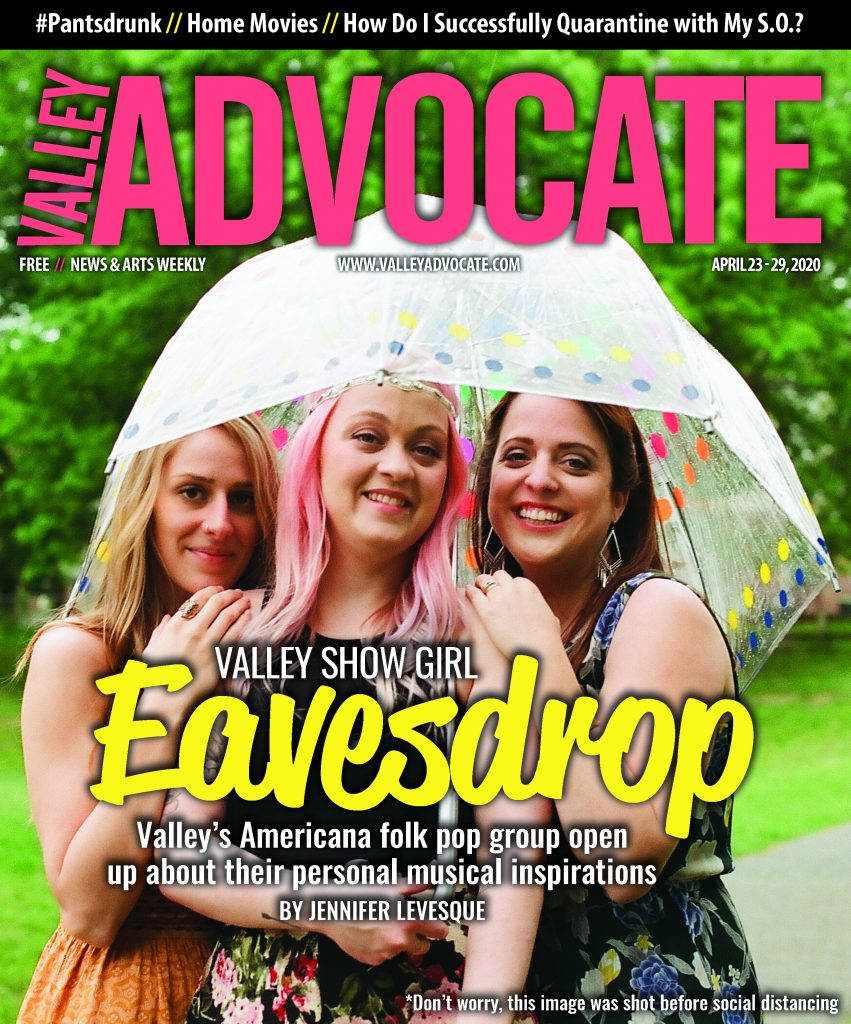 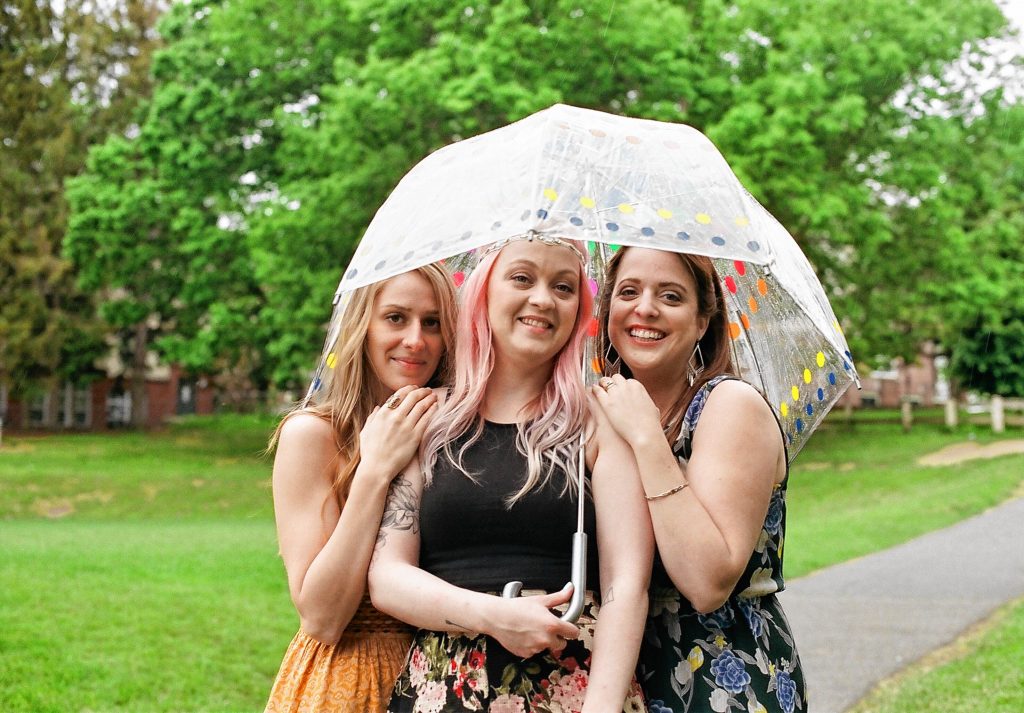 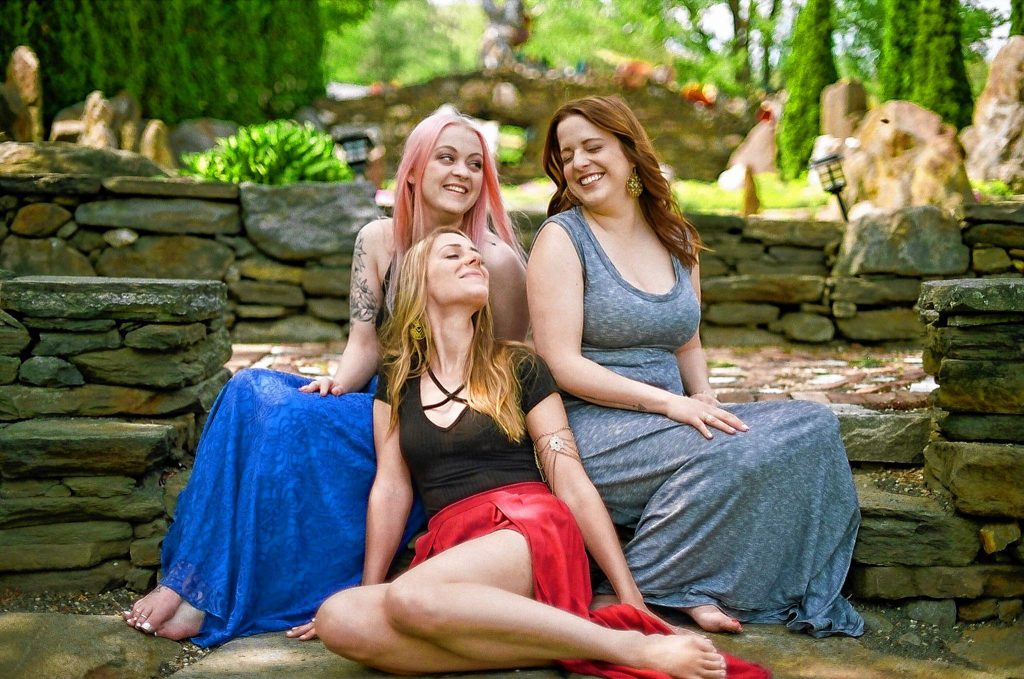 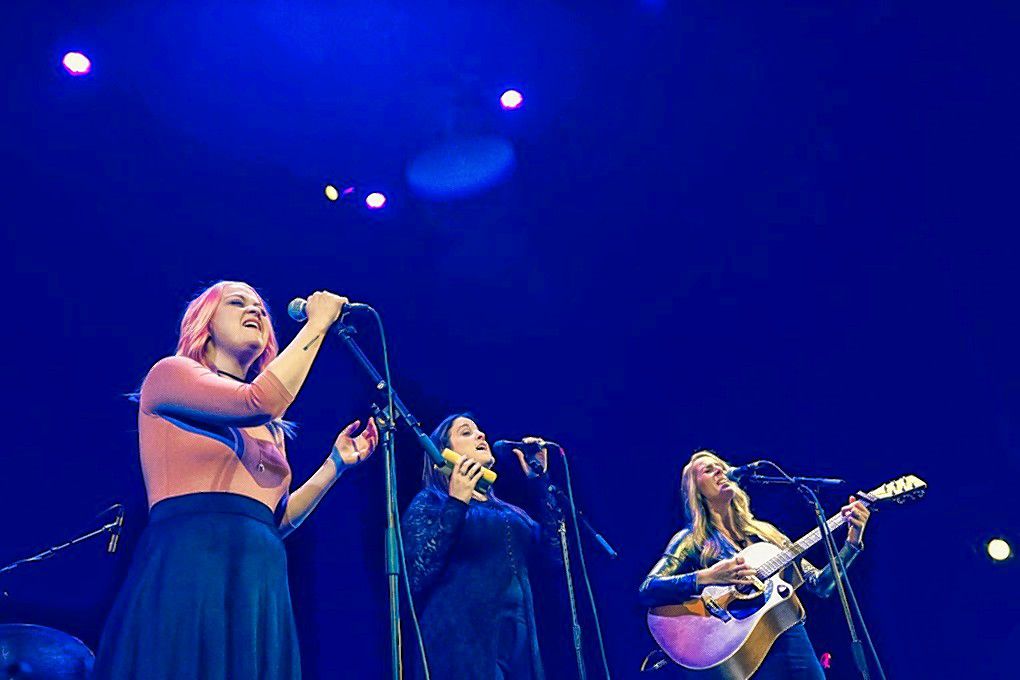 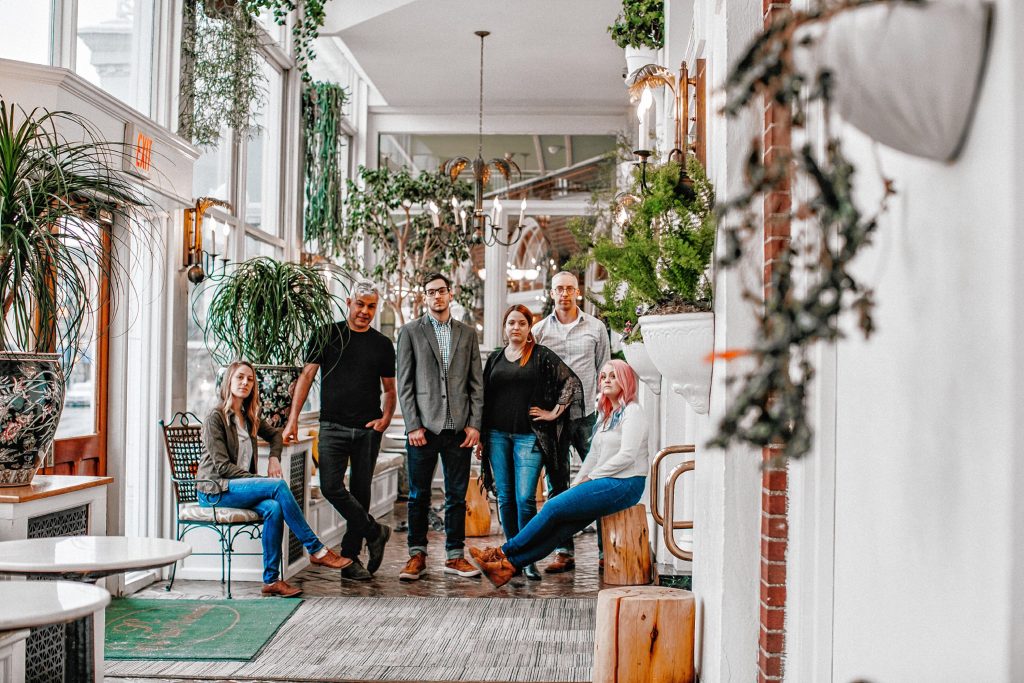 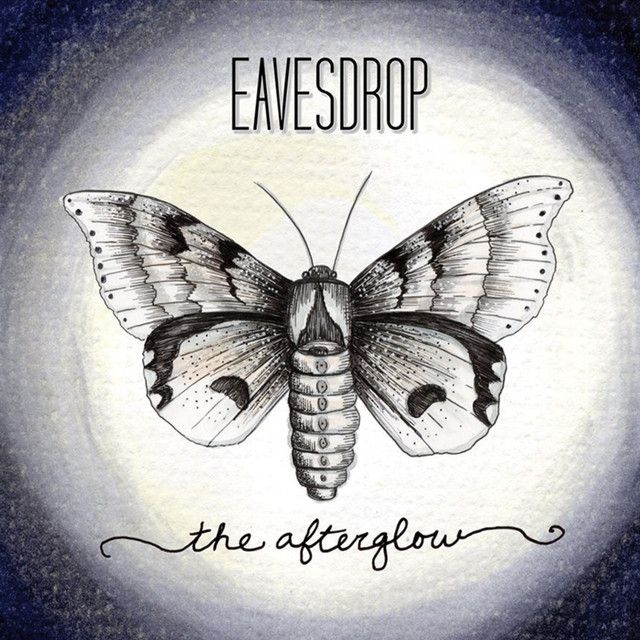 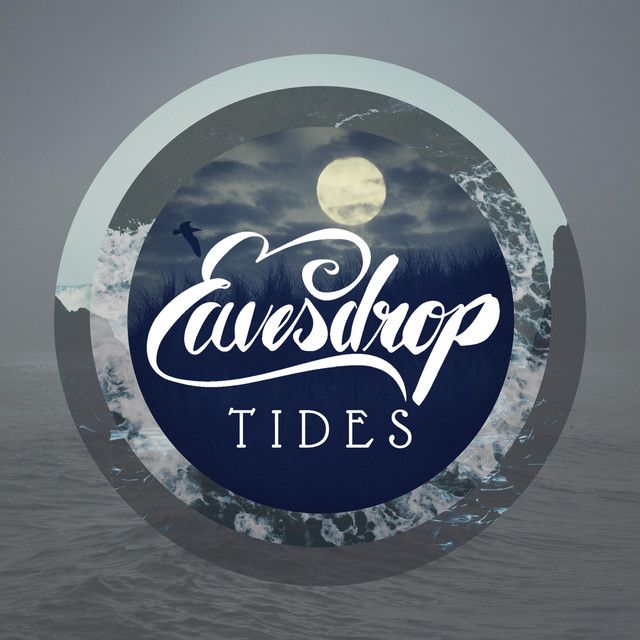 Pioneer Valley natives Kara Rose Wolf, Kerrie T. Bowden and Laura Marie Picchi are soul sisters. Their trio, Eavesdrop is musical proof. They combine three-part vocals with percussion and acoustic guitar into their style. A mixture of Americana, folk, pop and soul, their mixed-genre is appealing to anyone who enjoys music in general. Easy to dance to, or to sit back and relax with a cocktail.

Their first EP, 2016’s The Afterglow introduced us to their three-part harmonies, rhythmic guitar and gentle percussion. The lyrics dance around love, heartbreak, empowerment and Earthly issues. Their track “Hourglass” is a song to add to the playlist of current times. With lyrics, “Frantic, the world’s in fury / A wheeling spiral, out of control / Tired of holding on, so afraid of letting go / Chaos, the world is chaos / A crazy frenzy, a wild chase / Too busy to clear your head / Take a moment, slow your pace / Time will pass, we’re captains of the hourglass.”

With their debut full-length, 2017’s TIDES, they grew as a band and became a 6-piece adding Jared Quinn on electric guitar, Marc Seedorf on bass and Sturgis Cunningham on drums. The addition emerged more power to the existing powerhouse that the trio originally were. The song titles are poetic and lure you in at a glance. My favorite track is “Now You Know.” You hear the R&B style ring through with some soul. It has that “I am woman, hear me roar” vibe that I love, flip that hair as you strut yourself away.

I caught up with them recently to dive into their personal musical tastes and backgrounds. The trio pulled back the curtain a little to reveal what is on the inside of their inspiration. 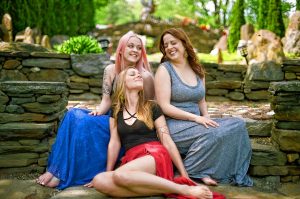 Valley Show Girl: Can you tell us about the music in your childhood … What was being played in the house growing up?

Bowden: Most of the music in my childhood came from my father; I specifically remember listening to The Eagles, some Beatles, Fleetwood Mac, etc. He also had some folky roots, so there was some Simon & Garfunkel, Joan Baez, Ian & Sylvia, etc. thrown in! One thing my mom DID always have blasting….Cher.

Wolf: My house was weird. My mom listened to things like The Beatles, Loreena McKennitt and Joni Mitchell. My dad listened to Stevie Wonder, Frank Zappa and Jethro Tull. Music was always on in our house, though, and I attribute my appreciation for a wide range of genres to them. 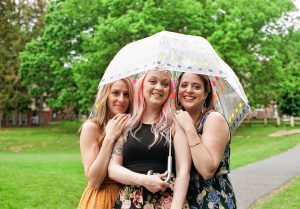 VSG: As you got older, what styles of music did you gravitate towards on your own?

Picchi: The punk-rock scene was very prominent in our neck of the woods (“our” referring to Kerrie and I). I quickly became immersed in that since it was the focal point of most friendly hang-outs as a teenager. In college, I found Silverchair, Jeff Buckley, The Foo Fighters, & The Fire Theft. Soon after I was onto R&B & Soul  (The RH Factor, D’Angelo), and since then I’ve been really digging Chris Stapleton, Brandi Carlile, Moonchild, & Lianne La Havas. I love a little bit of everything!

Bowden: I definitely ventured into the pop and pop punk world a very early age, but also into the Indie and singer/songwriter stuff as I got into late high school/college age. Some of my favorites were Death Cab for Cutie, Copeland and City and Colour. Today I’m sort of a healthy mixture of those and what I grew up on. 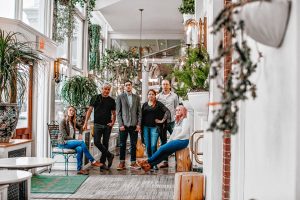 VSG: Any specific artist/album/concert you want to mention as influences?

Bowden: Honestly, I think there is always something to learn from every live artist you see! We do a lot of “homework” as a band, so we attend concerts pretty regularly. I’d say the ones that have stood out the most (AKA I was giddy and/or cried) were probably Fleetwood Mac, Brandi Carlile, The Lone Bellow, Chris Stapleton and Justin Timberlake.

Picchi: All three of us have seen a number of fantastic concerts together! I whole-heartedly agree with Kerrie’s highlights and feel like all of those concerts have certainly made a lasting impression for me – and likely all of us.

Wolf: My parents got me listening to James Taylor at a young age and my love and appreciation for his songwriting runs pretty deep. All of his records and seeing him live have certainly been a big influence for me. 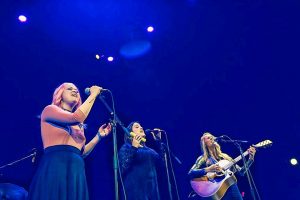 VSG: Can you talk about when you first realized you were interested in being a musician?

Wolf: I can’t remember a time when I wasn’t surrounded by music. I have been on stage since I was in grade school and I don’t think I ever imagined not being involved in the performing arts somehow. I feel very grateful that I’ve been able to play music professionally in my adult life.

Bowden: This is a tough one for me. When I was a kid I’d belt songs from The Little Mermaid at the top of my lungs, took part in choruses throughout high school and started singing in a duo with Laura. When I went to college I totally stopped singing altogether, and when Laura brought me back into the world of music five years ago (Kara and I met on our first day of rehearsal) it was literally chicken soup for the soul. I think I knew then that this is what I was meant to be doing with the people I was meant to be doing it with. 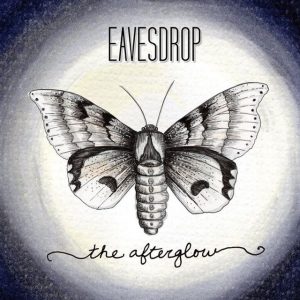 Picchi: Music and family has a very strong connection for me. Most family gatherings on my mom’s side would include a musical session, where my Pepere would play guitar and we would all sing together (LOTS of us! I’m talking 50+ people). In fact, my mom, and aunts used to have a musical trio of their own so I practically grew up on harmonies. I took piano lessons as a kid and was always involved with the school chorus. I’d say I really realized my passion for the creation of music when I was 14. That’s when I started writing, and it’s still my favorite part of the whole process.

VSG: Is the writing process a group effort?

Eavesdrop: The writing process is most definitely a group effort. We share ideas, lyrics, melodies and instrumentation with each other in snippets and work on them together to shape them into full songs. As a trio, we take a retreat once or twice a year at this peaceful little cabin in the woods, lock ourselves in, eat, drink and work on original music. We’ve done it for years now and it’s really a dedicated time for us to unplug and focus on the writing process. With the introduction of the full band, we’re able to take some of these ideas and bring them to the guys who transform them in a way we hadn’t tried before. It’s definitely different for us but very fun and exciting!.

VSG: Originating as a trio, the group has evolved into a larger band. How did that happen? 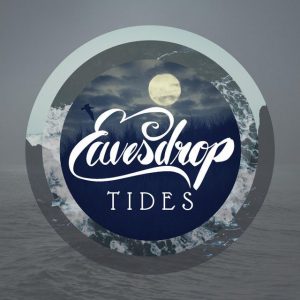 Eavesdrop: After our first full length album where we introduced the band, this seemed like the natural next step for us. Working on the record with the band and seeing how our songs really took on a new shape and transformed felt incredible, so we wanted to keep that momentum going. These guys are the best of the best and are so supportive of our vision and ideas – it’s been a joy to evolve with them…and it’s still going!

VSG: Apart from music, what are your hobbies? Anything else you do for work you wanted to share?

Eavesdrop: Our hobbies include adequate sleep, when we can get it!! We all have full time jobs in addition to being full time musicians, so there isn’t time for much else to be honest. But even when traveling for shows, we try to take a day (or moment) when we can for self-care, too – going to live music together for inspiration, sightseeing in new areas, or overeating at the restaurants that are recommended from our fans. You know, the staples of survival.

VSG: When COVID-19 hit, it took out pretty much all entertainment, almost immediately. We are all struggling with quarantine, what have been some of the issues you all have faced as a musical act?

Eavesdrop: Usually, we play somewhere almost every week, but obviously with all the COVID-19 precautions that hasn’t been the case. We have had to cancel our gigs and postpone all of our recording until later this year. It’s hard to lose money and momentum, and while we understand how very necessary it is, it’s not only a giant bummer but also affects the livelihood of all of our band members. If folks are able to, we would be super grateful for any amount donated to www.eavesdropband.com/donate to help keep us going.

All of our planned future dates are listed on eavesdropband.com or our Facebook page and we hope you’ll come out and support once everyone is able to. People supporting live music always means so much to us, but now more than ever! We’re planning to hit some new venues this year and hope to see some new faces out there!

Eavesdrop started recording a new album with Andrew Oedel and Ghost Hit Recording in West Springfield before the world turned on its head. Their bassist, Marc Seedorf is producing it. Check the band’s Facebook, Instagram and website for more updates on that as well as updates on future dates when Mother Earth allows us to be social again.

Jennifer Levesque writes the column Valley Show Girl, she can be reached at jlevesque@valleyadvocate.com