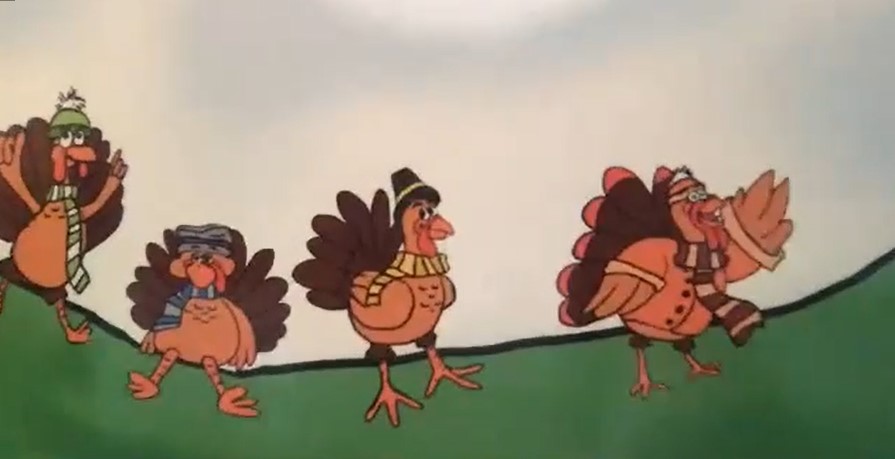 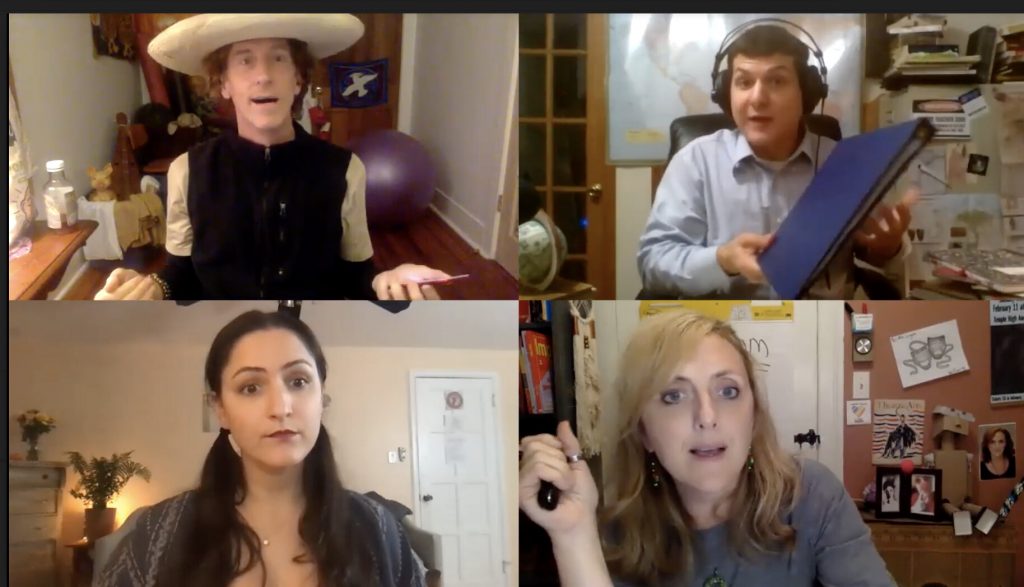 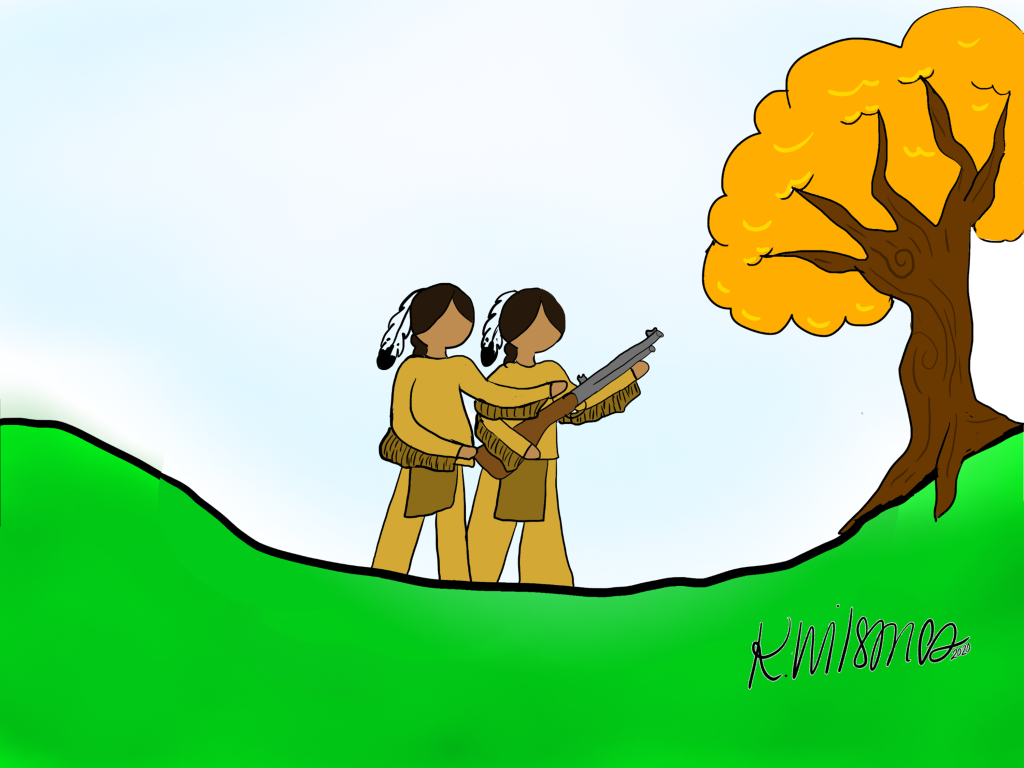 “Thanksgiving is such a lovely holiday. Do we have to talk about genocide during this beautiful American holiday?”

That’s the kind of pushback often directed at reassessments that put “the first Thanksgiving” in its true historical context, says Talya Kingston. She’s directing The Thanksgiving Play, which streams this weekend from the Berkshires’ WAM Theatre.

Written by Larisa FastHorse, of the Sicangu Lakota Nation, it’s a sharp-edged response to both those objections and some of the well-intentioned but misguided attempts at telling the “real” Thanksgiving story. It was among last season’s most-produced American plays. And it’s one of the funniest I’ve encountered in years.

Logan is a public-school teacher tasked with staging a holiday pageant and wants to push the traditional envelope. She’s hired a professional actor, Alicia, for the Native American roles. Jaxton is a yoga enthusiast who does performance art at the local farmer’s market. Both he and Logan are woke to the extreme, and they’re psyched to create an inspirational piece of devised theater with all the PC trimmings. Caden is the show’s stuffy history consultant, an elementary-school teacher and “secret playwright” who sees this as his opportunity to write a play for “actors over the age of nine.”

All four are white, including “ethnic-looking” Alicia, hired in from LA on the basis of a misleading headshot. As the embarrassing irony sinks in, Logan wails, “We’re four white people making a culturally sensitive Thanksgiving play for Native American Heritage Month. Oh my goddess!”

Two of WAM’s cast are actors I’ve known for years and worked with onstage. Carissa Dagenais (Alicia) and Rylan Morsbach (Caden) both graduated from PVPA, the Pioneer Valley Performing Arts Charter School, then after college went off to New York to chase their dreams. They are now back in the Valley, Carissa with an NYU degree in drama therapy, Rylan Covid-sheltering with family. I spoke with them and the director last week (via Zoom of course). 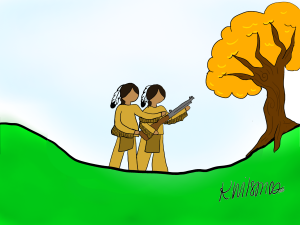 The piece takes scattershot aim at “traditional” approaches to the Thanksgiving story, the pitfalls awaiting well-intentioned efforts to correct history, and alternative theater – all of which can resonate strongly, and a bit uncomfortably, with us white liberals who live, and create, here in the Valley.

“One of the gifts of this play is that people can laugh at themselves,” Carissa told me. “I don’t think there’s a blanket answer to dealing with white supremacy and cultural erasure, but I do think that calling out some of the extreme versions of all of our beliefs and views with comedy is a good way to do it.”

“The playwright has provided us with a spectrum of stances toward difficult aspects of American history – from those who are trying way too hard to those who aren’t trying at all,” Rylan added.

The Thanksgiving Play was scheduled for WAM’s 2020-21 season, before Covid-19 made a hash  of everyone’s plans. Now, instead of onstage performance, it’s been adapted for Zoom.

“This is a very physical play,” Talya said. “We had intended to do this in a theater, so I cast physical actors, and I had all these ideas for movement. It was quite a process for me to shift.”

Some of the adjustments exploit the Zoom platform itself. When the script calls for Jaxton to clap a hand over Caden’s mouth to shut him up, he simply puts him on mute. Asides between characters become chat messages. 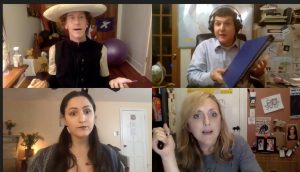 The play now takes place in the four separate rooms where the characters are rehearsing via Zoom. With the help of designer Juliana von Haubrich, the actors have “curated” their spaces to match their individual characters’ situations – Alicia in the AirBnB she’s housed in, Caden in what Rylan calls his “nerd cave,” Jaxton (played by Berkshire-based actor/dancer Tom Truss) in his yoga studio, with Logan (Molly Parker Myers) coordinating things from her empty classroom.

The biggest challenge, Talya said, came in the play’s between-scene interludes that lampoon holiday songs (“On the first day of Thanksgiving, the natives gave to me…”) and other festive staples, sometimes trenchantly. She envisioned them as “very physical and cartoonish,” with costumes and movement. Instead, Lakota illustrator Katari L. Wilson has created semi-animated cartoons that serve as sly parodies of the holiday’s picture-book conventions.

While Caden, as Rylan put it, is “a sort of fish out of water” among these theater types, so is Alicia, the LA actress. In contrast to the others, “she’s just here to do her job,” not to make a statement, Carissa said. Guileless and blithely un-PC, Alicia gives her hair and makeup more attention than the issues of “empowerment” and “uplifting Native voices” that excite the others, lending an outsider’s objectivity to the often fraught and hapless proceedings.

In an extra twist, Carissa, playing a white woman hired to play a Native American, is a white-presenting woman with a few strands of Native American DNA. In that sense, “Playing Alicia was kind of cathartic, making fun of myself,” she said. “So I encourage anyone who sees themselves in the play and feels uncomfortable – feel free to use me as your example of It’s cool to laugh at yourself.”

The Thanksgiving Play streams on demand Nov. 19-22. Tickets available here (sliding scale $15-$100) also give access to the e-playbill, action steps on “how you can make change today” and connections to the Mohican Tribe, “traditional stewards of the land on which we reside.”