Moving forward: How to leave the Trump-era behind and forge a new future 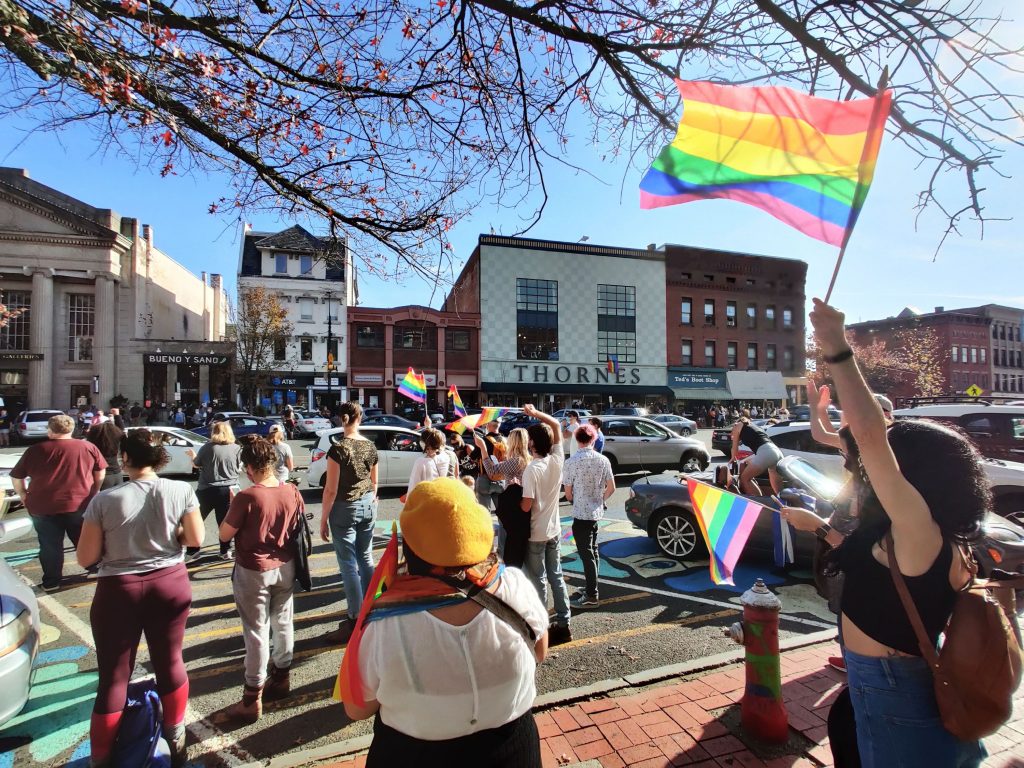 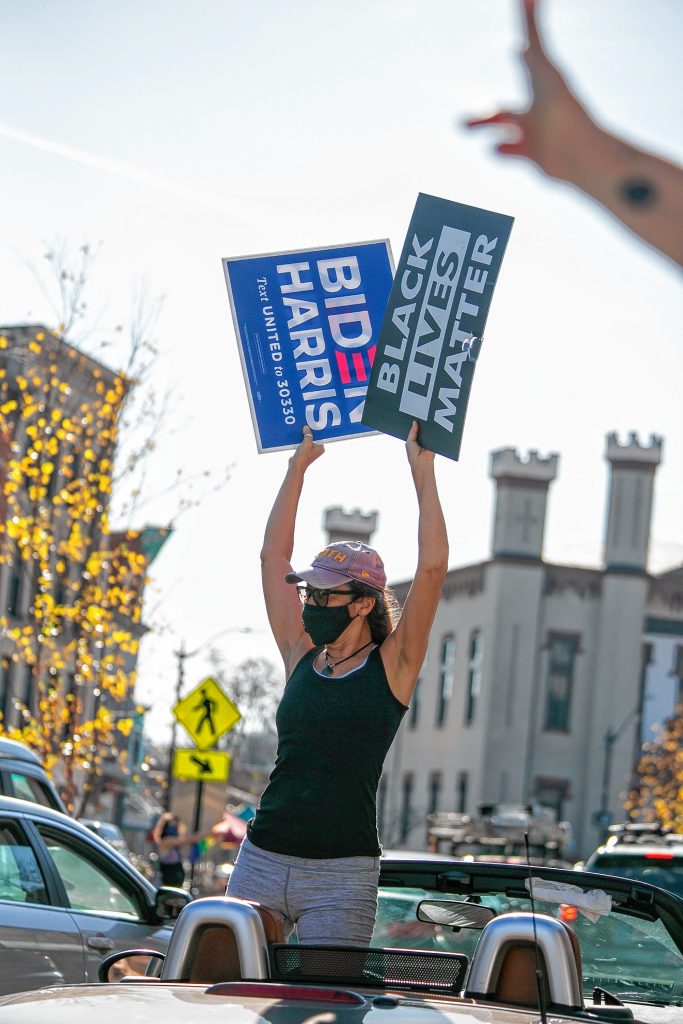 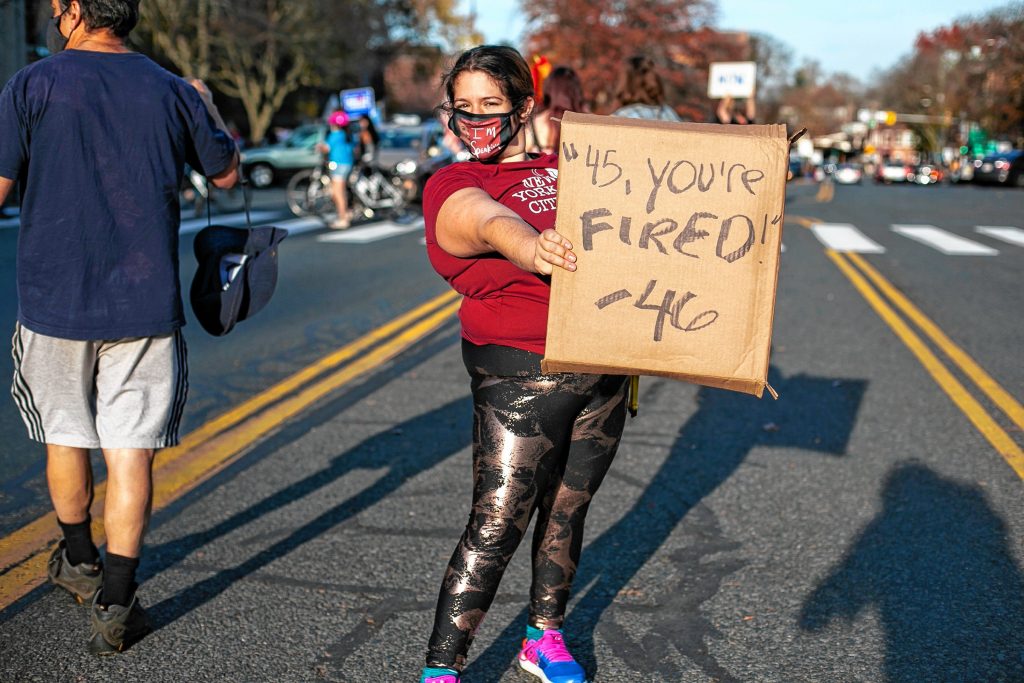 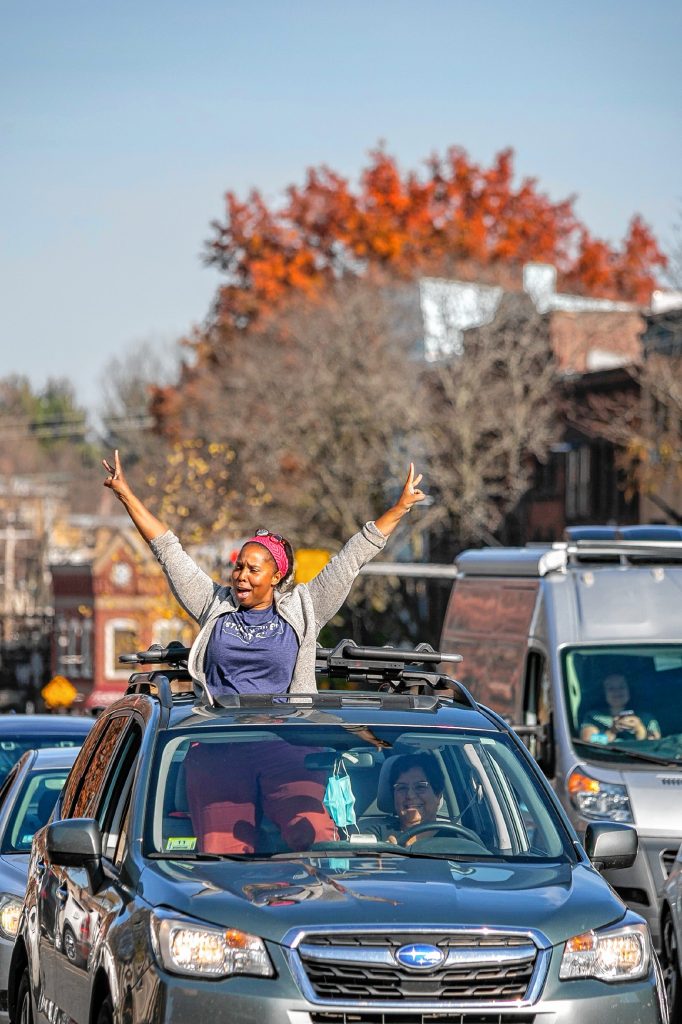 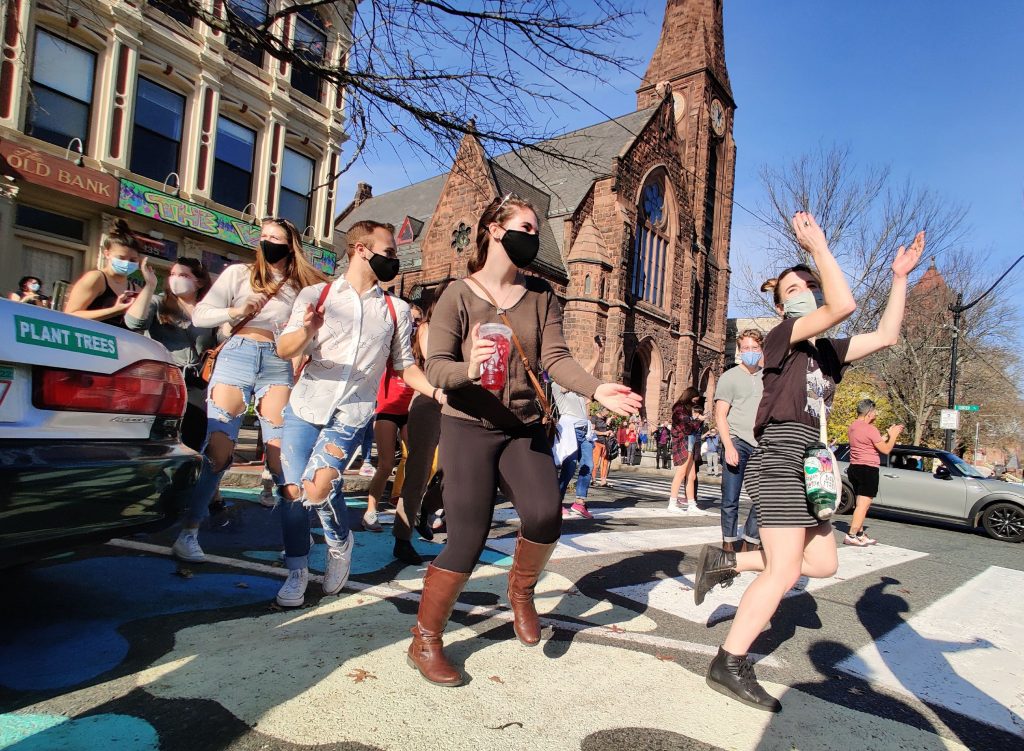 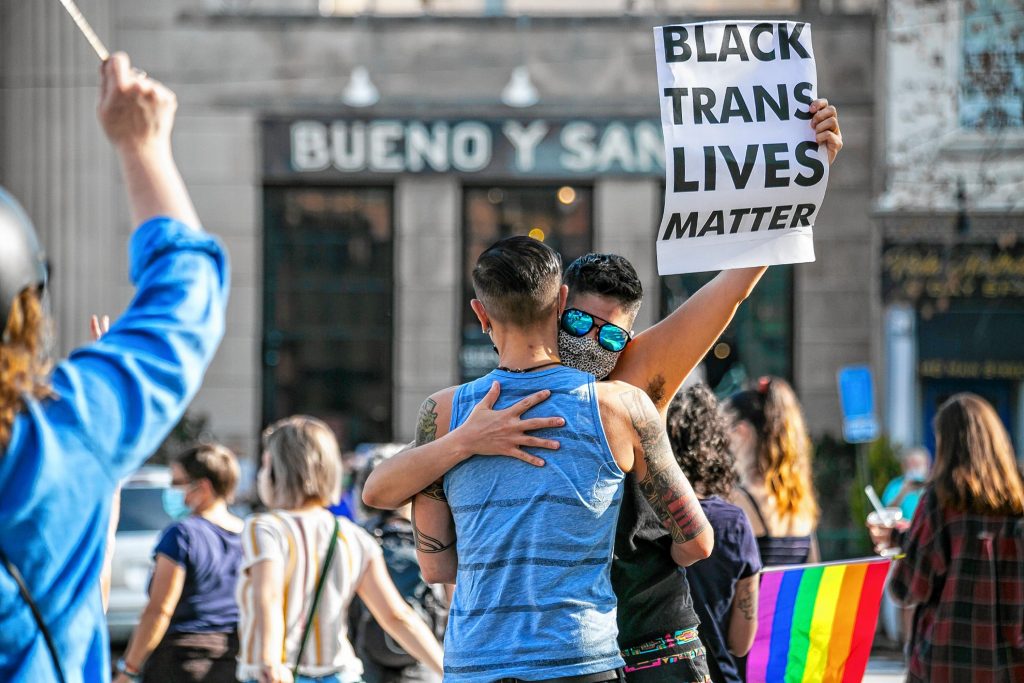 Shai K. and Jess F., of Northampton, MA, embrace during a Downtown Northampton celebration Saturday after hearing the news that Joe Biden would be elected the 46th President of the United States.

For a time, it really looked like the large-scale repudiation of President Donald Trump so many of us had hoped for would come to pass — the polls seemed to predict it and Democrats were racking up mail-in and early vote advantages across the board. But instead the election of 2020 has left us with two frightening and inescapable realities:

1) Tens of millions of Americans — about 74.1 million as of this writing — voted to keep a president in office who has blatantly supported racists, scapegoated minorities to the extent of separating children from their parents, participated in flagrant self-dealing while in office, and blithely made up his own version of reality as a pandemic has taken 276,200 American lives as of Dec. 3, and climate change continues to ravage our planet.

2) The vast majority of Republican Party officials would rather support a fascist autocrat bent on overturning a fair election than give up power to a democratically elected leader.

That leaves defenders of democracy in an increasingly precarious position moving forward. Trump’s refusal to concede and commit to a peaceful transfer of power, along with tacit approval from his enablers in Congress and the Republican Party, embolden not only Trump, but future autocrats who might hope to rule over the United States regardless of the outcome of our elections.

While we can’t rule out Trump forcing his way into a second term at this time, the most likely outcome seems to be that President-elect Joe Biden will take office on Jan. 20. Assuming that comes to pass, what can be done to safeguard our democracy as well as address the other major issues plaguing our country, including rapidly progressing climate change, an out-of-control pandemic, deepening inequality, rampant racism, a stalled economy, and a Supreme Court supermajority wildly out of step with the majority of Americans?

It feels daunting — beyond daunting — and yet the moment in which we find ourselves requires sustained action on a number of fronts if we hope to push past the destructive Trump era and avoid winding up in a similar place four years from now. Here are some thoughts on how we can make this happen.

Win Congress and the presidency

We must ensure that Democrats — the one remaining party to adhere to democracy — win unified control of government. That means control of the presidency along with both houses of Congress.

I’m not a blanket supporter of Democrats, and have been critical of the dominant corporate wing of the party that has been far too willing to allow vulnerable people to fend for themselves while making life easier for large corporations like insurance companies. However, in the face of increasingly scary fact-ignoring and power-hungry Republicans, Democrats are the one group that can pass the reforms needed to ensure American democracy continues.

I proudly supported Bernie Sanders in the Democratic primary, but I recognize that a President Biden has potential to do a lot of good for the country just by undoing much of the damage done under Trump.

Despite losses in the House, Democrats will retain a narrow majority. In some ways, this narrower majority can be looked at in a positive way, as Democratic leadership will be forced to listen to its most progressive caucus members. In addition to the four-person “squad” — Alexandria Ocasio-Cortez, Ilhan Omar, Rashida Tlaib, and Ayanna Pressley — a handful of others, including Black Lives Matters activist Cori Bush in Missouri, New York City progressives Mondaire Jones, Jamaal Bowman, and Ritchie Torres, and Illinois Rep.-elect Marie Newman have committed to supporting people-centric policies like a Green New Deal, Medicare for All, and an increased minimum wage.

The Senate is the bigger problem area for the Democrats, and every activist and democracy-minded person in the country should be pouring energy in getting two Democratic candidates in Georgia — Raphael Warnock and Jon Ossoff — elected in the Jan. 5 runoff elections in the Peach State. That will give Democrats a 50-50 tie in the Senate, with Democratic Vice President-elect Kamala Harris able to break ties.

With a Democratically-controlled Senate, while the narrow margin may make much of our needed reforms difficult to say the least, it will stop Mitch “Darth” McConnell from refusing to bring essential legislation to the Senate floor for a vote, as he did for Obama Supreme Court nominee Merrick Garland and much of the Democratic agenda for the past decade.

Medium and long term, I am more and more coming around to the belief that Democratic voters must leave deep blue states like Massachusetts and move to states where their votes can make a difference. It is not lightly that I make the suggestion to my fellow progressives to leave our beloved Valley, but the numbers are clear.

Fewer than 50,000 people decided this presidential election — about 10,000 in Arizona, 14,000 in Georgia, and 20,000 in Wisconsin. If all three of those states had flipped, there would have been a 269-269 tie in the Electoral College, and the Republican-tilted state delegations of the House of Representatives could have handed the election to Trump.

Meanwhile, Democrats cast 1 million wasted votes in Massachusetts, more than 1 million in New York, and something in the neighborhood of 5 million in California. There are indeed more of us than there are of them — Joe Biden won the popular vote by nearly 7 million — but clustered as we are in a small number of states, it is that much harder for us to take the majority.

In 2022, a small number of states will determine control of the Senate, many of which were decided with a razor-thin margin. Republican Sens. Pat Toomey of Pennsylvania and Richard Burr of North Carolina have both indicated they will retire in 2022. Both states saw margins of fewer than 100,000 votes decide who won. Wisconsin, where vulnerable Sen. Ron Johnson is up in 2022, was decided by a margin of only 20,000. Republican Sen. Lisa Murkowski of Alaska won her last election in 2016 by a margin of less than 50,000 votes. She is up for reelection in 2022.

It’s not a simple thing for Bay Staters, New Yorkers, and Californians to hit the road and start new lives in North Carolina, Wisconsin, Pennsylvania, and — for the adventurous among us — Alaska, but several recent developments have made it more possible than ever. Remote work forced on millions due to the pandemic frees up some of us to move. The millions put out of work by the pandemic likewise have less holding them to their current residences.

And, perhaps most significantly, the pandemic has spurred many to leave urban centers like New York and Boston, and created insanely inflated real estate markets in places like the Valley — further making cheaper states like North Carolina, Georgia and Pennsylvania far more appealing and possible to live in.

The incentive to accelerate the already existing trend of progressives moving to these states (with Atlanta and Charlotte among the fastest growing large cities in America) is clear — protecting our democracy, and I’ll certainly be looking into this more.

With unified government secured, Democrats must move quickly to establish pro-democracy laws, first and foremost among them a new Voting Rights Act, establishing automatic voter registration, universal vote-by-mail, eliminating gerrymandering by mandating nonpartisan district map drawing, and mandating adequate polling places so that voters who do vote in person do not have to wait hours in line.

In addition to this, voting rights must be extended to Washington, D.C., and Puerto Rico through statehood. Many of these changes may only be possible through elimination of the Senate filibuster, a tool notoriously used in history to curtail civil rights legislation.

Ultimately, the Electoral College must be eliminated or a work-around developed, such as through the National Popular Vote Interstate Compact — an agreement among states that would mandate their electors to vote for the popular vote winner.

Elimination of the Electoral College would require a constitutional amendment, a tall order in this polarized environment. But the Interstate Compact gets around that by using the Electoral College system to award the election to the popular vote winner. So far, states adding up to 196 electoral votes have signed on to the agreement, which would take effect when that total reaches 270, a majority of electors. Lawmakers in several other states have legislation pending that would make the interstate compact law.

And finally, immense Supreme Court reform is necessary, whether that takes the form of expanding the court — a policy I advocated at the time Justice Neil Gorsuch was nominated in 2017 and is even more needed now — or establishing judicial term limits.

It would be nice if saving our democracy was the only crisis that we face, but there are many others that President Biden can tackle, whether or not he has a willing Senate.

Priority one is to rejoin the Paris Climate Agreement, and take our place among all nations working to stave off the most serious consequences of climate change. While a Green New Deal would be the preferred legislative outcome, simply using executive power to reinstitute Environmental Protection Agency guidelines and federal emissions standards gutted during Trump’s presidency are an essential step.

As Trump has been largely ignoring the raging pandemic, taking steps to curtail the virus and support vulnerable individuals and businesses affected by it should be a top priority, and it boggles the mind that Republicans torpedo bipartisan efforts on this front time and again. Passing comprehensive unemployment benefits, nationwide testing standards, and money for a vaccine distribution plan should all frankly have been passed already, but should be done as quickly as possible once Biden takes over and the new Congress is seated.

Biden has already indicated he would lift the cap on the number of refugees allowed into the country, a topic the Advocate spent a three-part series exploring earlier this year. Humane immigration reform, allowing those fleeing autocracy and violence in other parts of the world should be welcomed into our borders.

If we can’t get Medicare For All, let’s see Biden work to expand Obamacare with a public option as he promised to do, and move more in the direction of health coverage for all Americans. This must be combined with other efforts to reduce inequality in our country, which is at the root of so much of the anger from voters of both parties — raise the minimum wage, work to make higher education and pre-kindergarten more affordable, and reverse the horrific tax cuts for the rich and corporations, which was one of Trump’s only legislative accomplishments.

I have wrestled over the topic of Trump’s own crimes. On the one hand, one does not want to make a political martyr out of him with prosecution. But ultimately, no one is above the law.

Trump must be charged for his crimes, and his likely tax evasion and self-dealing while in office investigated fully. Though he may go through the effort to pardon himself, a presidential pardon will not protect him from state-level crimes in New York, where the district attorney has been granted access to his tax returns and, if the Times reporting is any indication, will find malfeasance there.

Trump will remain a dangerous individual regardless of what happens to him. He has already indicated he intends to run again in 2024 if he is unsuccessful in stealing this election.

It is a tall order and a careful line to walk both for our president-elect and democracy-supporting voters. But ultimately, the fate of our country is up to us, and I hope we are up to the challenge of navigating these post-Trump years.

Dave Eisenstadter is a former editor of the Valley Advocate.