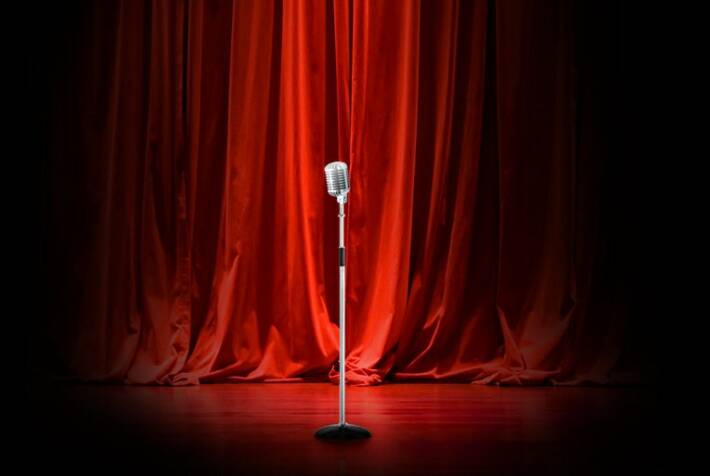 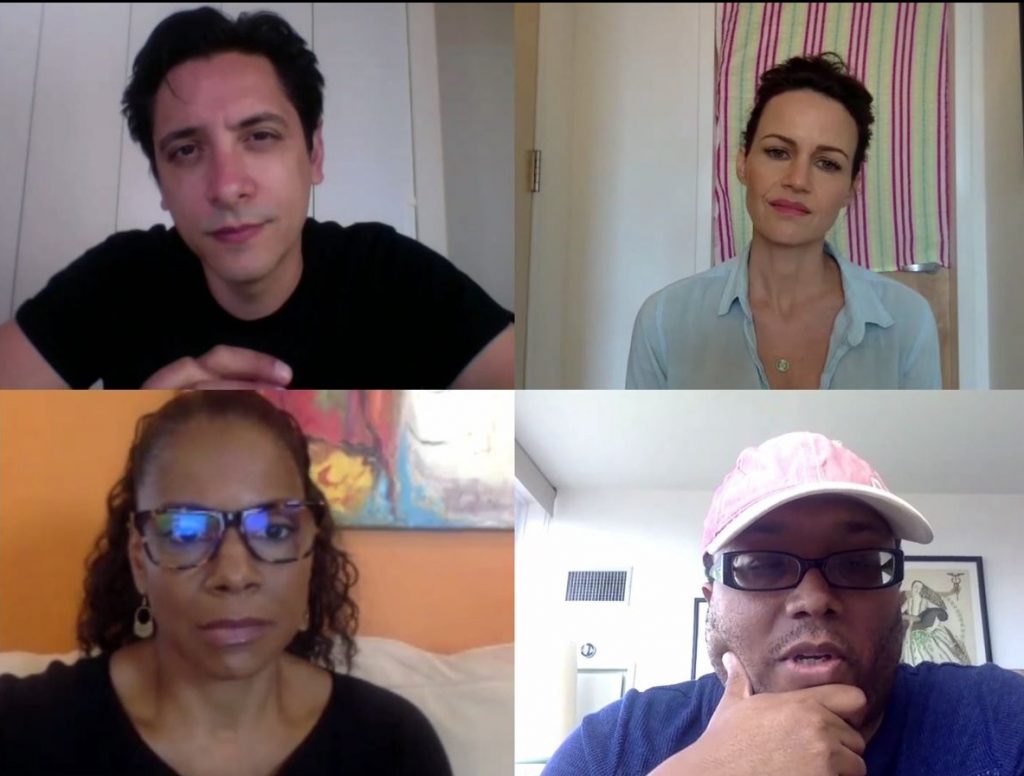 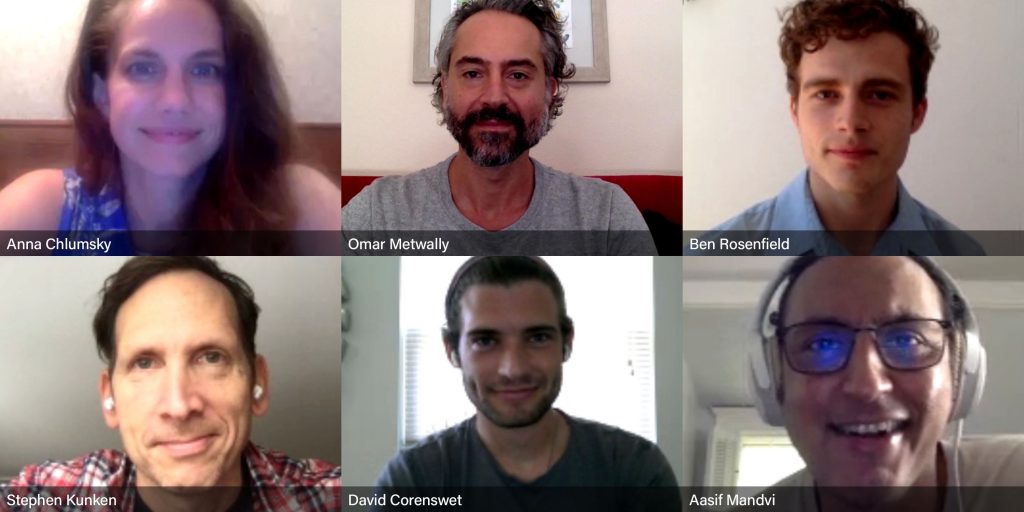 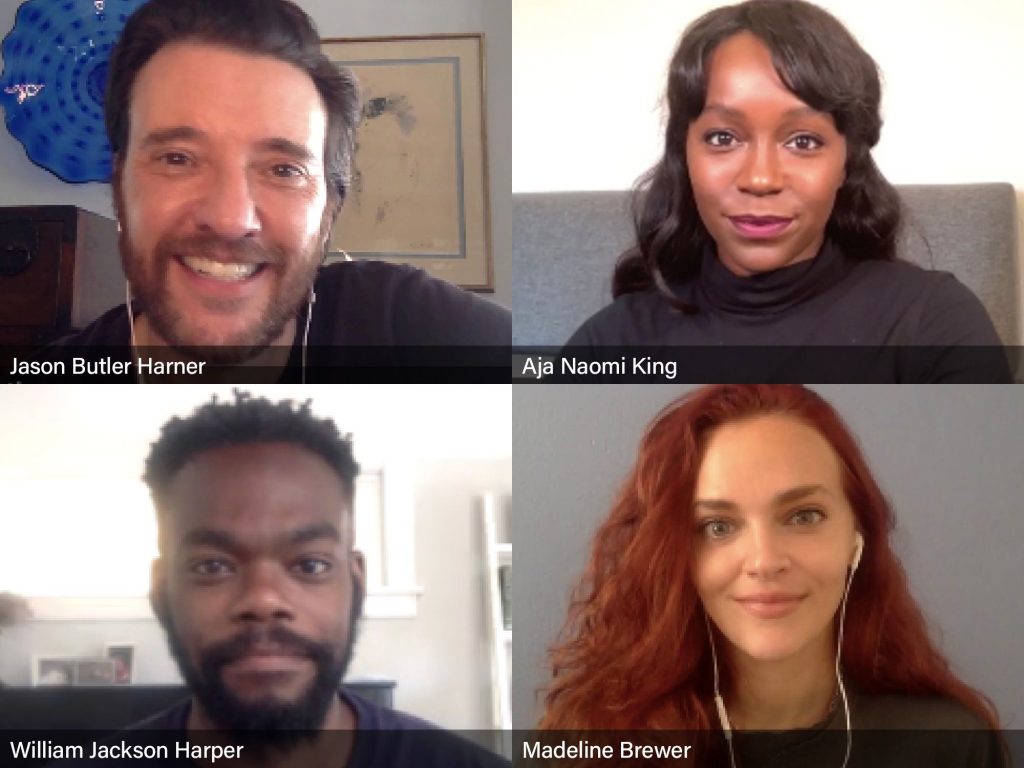 There’s an old story from the early days of television, when the flickering screen was competing for audiences with radio drama. A young boy, asked which he preferred, radio or TV, answered without hesitation, “Radio. Because the pictures are better.”

I was reminded of that story by the launch of Williamstown Theatre Festival’s 2020 season this month. That’s right – summer in December.

When the pandemic shut down the theaters, WTF announced that the shows would go on, in audio versions, partnering with the audiobook provider Audible. They finally started becoming available early this month. Six of the seven summer shows are in the Audible queue (a revival of 2015’s Paradise Blue has taken the place of one) with most of the originally scheduled casts.

I’ve lent an ear to the first three, and of course, the “pictures” weren’t better in my ears than they would have been onstage. But they held charms that took me back to those thrilling days of yesteryear when I was like that boy from the 1950s. And in a couple of cases, audio-only offered experiences we wouldn’t have had in the theater. 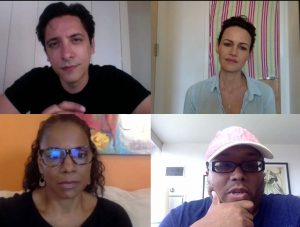 First up was this year’s marquee production, A Streetcar Named Desire, with Audra McDonald. The cast is distinctly multiethnic; I don’t know if the stage production was intended as purposely color-switched or simply color-blind. The two sisters in Tennessee Williams’ masterpiece are specifically white, raised in cotillions with Mississippi gentry. The loss of their ancestral home, Belle Reve – which propels Blanche Dubois to seek refuge in New Orleans’ French Quarter with sister Stella (Carla Gugino) and her distinctly un-gentrified husband Stanley (Ariel Shafir) – is symbolic of the shattered remnants of a “beautiful dream” of graceful Southern life.

In this audio format, racial distinctions disappear in the actors’ non-specific Deep South accents. What we get instead – especially in headphones, as I heard it and recommend that you do – is an up-close, almost frighteningly intimate experience, as the overheated dialogue and treacherous sexuality plays out inside your brain.

The voice you most want to wrap your head around is McDonald’s. The vocal coloring she brings to Blanche’s shifting façades – coquettish decorum alternating with determination-in-adversity, which slowly crumble into despair and confusion – make a convincing case for this format.

I was puzzled by Lindsay Jones’ original music and sound design. In Williams’ script and most other productions, the music that replays in Blanche’s mind is the polka tune, silenced with a gunshot, that haunts her memory. Here, those moments are keyed by a menacing drone that swells and crescendos to the shot. Other heightened sequences build into nightmarish echoing voices and sound effects, surging to horror-movie pitch, while scene transitions are signaled with dramatic chords from an organ – recalling, yes, old-time radio drama.

The second Audible release recalls that era even more strongly. Photograph 51, by Anna Ziegler, tells the true story of Rosalind Franklin, a British chemist specializing in X-ray crystallography who made a key contribution to discovering the structure of DNA, the famous double helix that’s been called “the secret of life.” Her role, though, has only lately been recognized and lauded (the rover vehicle for an upcoming mission to Mars is named for her). 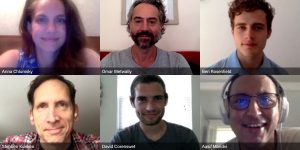 The framing device is a retrospective conversation about Franklin among four colleagues with whom she had a prickly relationship, to say the least. They are James Watson, Francis Crick and Maurice Wilkins, who shared the 1962 Nobel Prize for the discovery, and Franklin’s two assistants – all of them men.

This play, then, is a contribution to feminist history, correcting and illuminating the received record. On one level, it’s what you might expect: the female genius who should have taken equal credit but was shunted aside and forgotten. It’s also about the “race” among competitive colleagues to be the first to solve the elusive genetic code.

But it’s more than that – more complicated and more interesting. It’s about the female genius who almost beat the guys single-handed – but who sabotaged herself by going at it single-handed.

In Ziegler’s telling, Rosalind (Anna Chlumsky) is starchy and humorless, single-minded and protective of her work, refusing offers of collaboration not only with Watson and Crick but with Wilkins, her own lab partner. The photograph of the title is the image she takes that reveals the double-helix structure of the DNA molecule. But she doesn’t recognize its significance; Watson and Crick do, which is why we remember their names and not hers.

So it’s a kind of tragedy – the flaw that leads to the hero’s downfall.  The Shakespearean metaphor is indicated by references to The Winter’s Tale, a fable of peremptory acts and missed chances (not to mention Franklin’s name, Rosalind – As You Like It’s doughty independent heroine playing a man’s game).

The Golden Age of BBC radio drama is reflected in the 1950s setting and the actors’ accents. With the exception of the two American characters, everyone speaks in the clipped “received pronunciation” that used to be the rule on the Beeb. And the recording is in mono – which may also be meant to reflect the period, but which misses an opportunity.

As replacements for the stage performances that didn’t happen this year, these Audible programs could exploit the possibilities of stereo sound to help us imagine the actors onstage, separated and moving about, not clustered downstage center. (Streetcar gives us a binaural background hum of the sounds of the street outside but little voice separation.) In this play, especially, the stereo spread would have been useful, as the action takes place in several different locations, sometimes quickly alternating or simultaneous.

Animals does make good use of the audio spectrum – this one is probably best heard in front of stereo speakers, where you can get an image of the actors spread out and moving around onstage, complete with stage-left and -right doors.

Stacy Osei-Kuffour’s world-premiere play is a dinner-party tragicomedy that hinges – or rather becomes unhinged – on race. At first, we meet two couples who clearly are not meant for each other, and within that quartet, one pair who seemingly are. 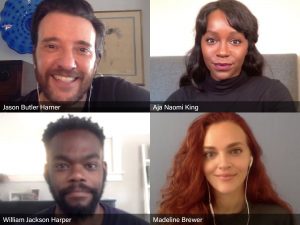 Henry (Jason Butler Harner) has just proposed to Lydia (Aja Naomi King), his longtime partner, but within seconds they fall to bickering, and quickly into a verbal brawl – which dissolves into heated foreplay – just as Yaw (William Jackson Harper) and Colleen (Madeline Brewer) arrive for dinner.

Lydia and Yaw (né Jason – he’s recently “erased the white man’s name”) are childhood pals who almost became lovers and now have a cozy best-friends rapport. Their respective romantic relationships are both kind of icky. Henry met Lydia when she was a teenager and he was in his thirties, and Colleen is one of Yaw’s students at NYU.

These connections are explored and exploded in the course of the dinner party, over wine and weed. For me, the resulting trajectory was predictable – once I’d sorted out the racial identities. Onstage it would be obvious that Lydia is Black, but I didn’t pick that up right away on audio, despite a couple of lines that at first didn’t click. The dynamics, then, are between two mismatched interracial couples and between two Black characters whose lives and emotions are entwined.

My initial confusion was paralleled by a structural question: A colleague thought the musical bridges between scenes led into flashbacks, while to me the action seemed consecutive and present-tense – another puzzle that wouldn’t be one onstage. I don’t know which of us was right, but it points to a problem, perhaps simply an audio-only deficiency, but maybe a larger problem with focus in the play itself.

Trying to touch on a lot of relationship issues at once, Osei-Kuffour draws her characters to suit her needs and forces them into improbable contradictions. Yaw’s true feelings about Lydia turn out to be so diametric to anything we’re shown in the first hour of the 90-minute piece that what’s gone before simply doesn’t add up. Likewise, the ick factors are thrown about like daggers – or like the crockery eventually is – then forgotten.

One common thread unites all three of these presentations: the excellent casting and first-rate performances. It makes you both sad not to have been able to see these marvelous actors at Williamstown last summer, and grateful to have at least this version of the performances that might have been.

The next in the seven-play series, Shakina Nayfack’s Chonburi International Hotel & Butterfly Club, about a group of transgender women, launches on December 29th. Like Animals and two more in the upcoming lineup, it’s a world premiere, reflecting WTF’s perennial commitment to new work.

Downloads of all shows are available to Audible subscribers for only $7.95 each at Audible.com. New members can get the first one free with a one-month free trial.

When the Valley Advocate resumes regular publication in the new year (bi-monthly) Stagestruck will continue to be a regular feature, with occasional additional posts online. Write me at Stagestruck@crocker.com if you’d like to receive notices when new pieces appear.