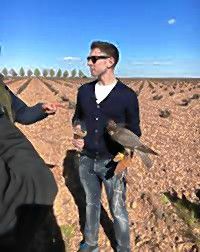 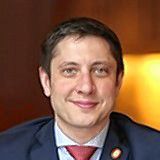 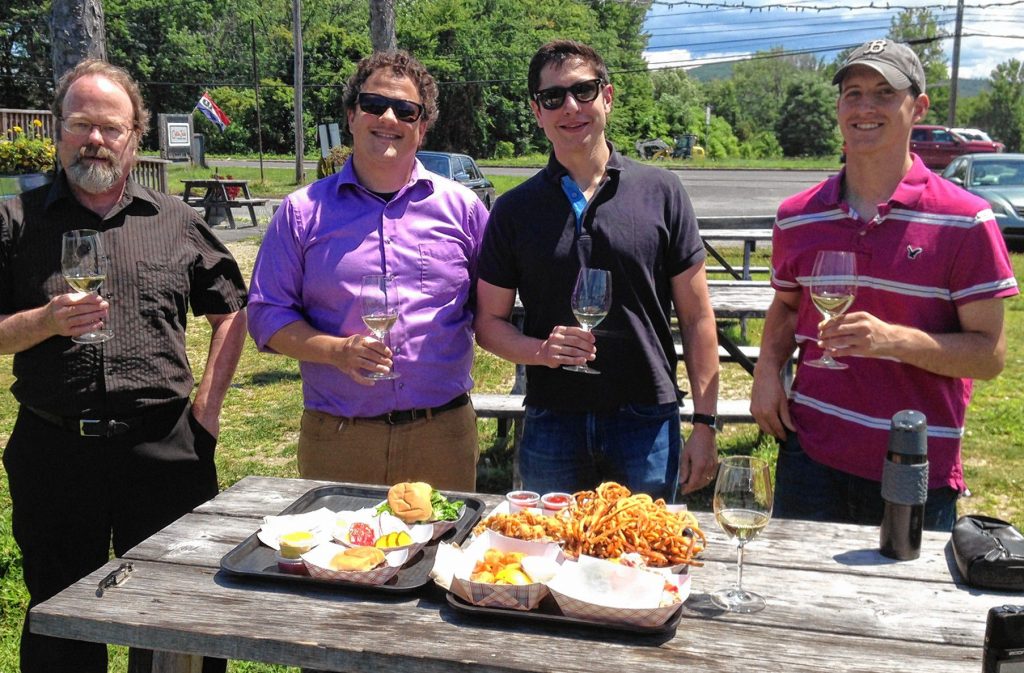 Brahm Callahan, second from right, at Captain Jack's pre-COVID with the Wine Snobs from State Street. 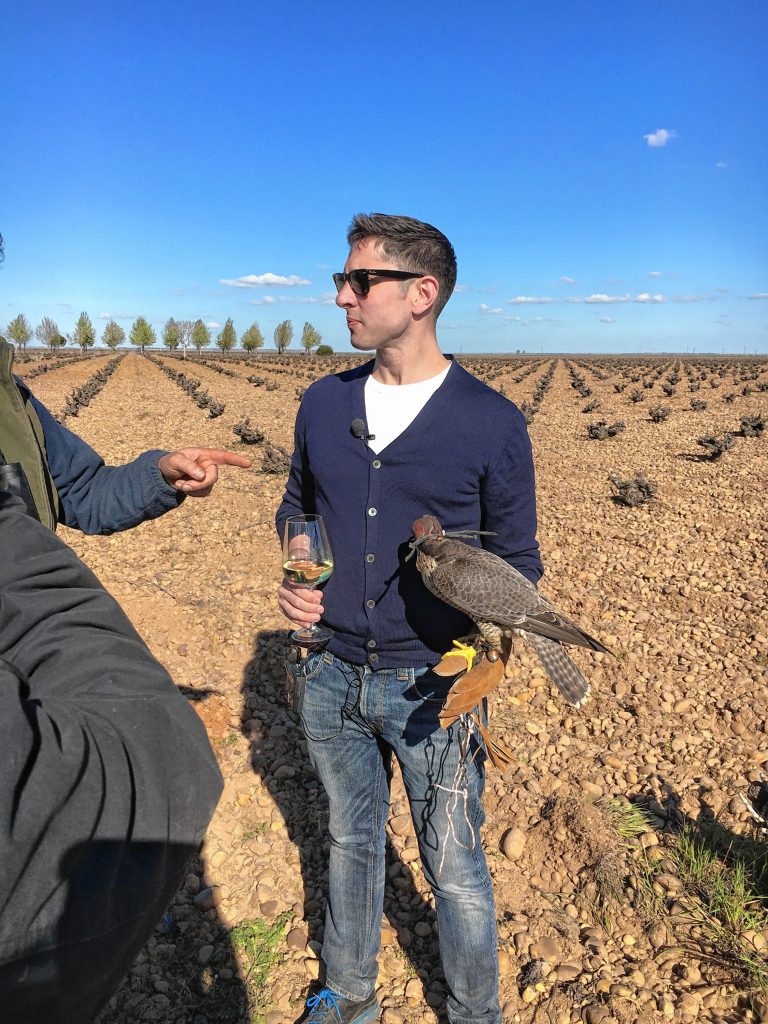 Brahm Callahan in Spain with a falcon. Falcons are used in the vineyards as a pest management and deterrent system instead of using sprays or chemicals.

I’ve been obsessively watching kung fu movies. I’m not sure why. Perhaps the reason is related to the pandemic. It could be a midlife crisis, or it could be the aftereffects of binge-watching “Cobra Kai.”

Regardless, it’s made me think a lot about the mastery of an art form. When it comes to my other addiction, drinking, there is but one elite group of sifu that are the functional equivalent of the Shaolin monks from the “36 Chambers”: Master Sommelier. There are currently only 269 Master Sommeliers in the world. And in my years of dabbling in the drink, I’ve only ever met one: Brahm Callahan.

Callahan grew up in South Deerfield, making his bones at restaurants like the Deerfield Inn and Chandler’s. But his life was on course to be a history teacher, leaving the Valley to pursue a doctorate at Boston College and selling wine in a shop on the side.

“I was just having more fun selling wine,” Brahm told me in a Zoom chat from his home in Boston. It’s not as far of a leap as you might think from a doctorate in history to a black belt in wine. “Wine is about history,” Callahan says, “It’s about people. It’s about culture. It’s about food. All the things that I really liked learning about.”

Where the great leap comes, is how high Brahm has soared in his mastery of the beverage arts.

The Court of Master Sommeliers say they were established “to encourage quality standards for beverage service in hotels and restaurants.” In reality, though, they are the Bruce Lee of the bottle. Perhaps you’ve seen the documentary “Somm?” If you are fascinated by wine, give it a look. You will get a glimpse into the arduous trials these students endure to become Masters.

They must learn the minute details of the geography and grapes of every wine region of the world. They are laminating maps and hanging them in their showers so they can study while they bathe. They are running the gauntlet of the goblet, blind tasting wine after wine after wine, until they learn to divine the taste of each grape from every place and even from which year. It seems like a parlor trick but it’s not. It’s wine kung fu. Bruce Lee exhorted us to be like water. Master Sommeliers become like wine.

The pass rate of the Master Sommelier test is somewhere between 3 and 8 percent. Some years, no one passes. Only nine people ever have passed on their first try. It took our local hero, Somm Brahm, three tries to pass. Callahan says, in reality, the exam is even harder than the documentary portrays. “Before the film, my dad just thought I was really bad at drinking,” says Callahan. “He would see me studying for this test and then fail. I would lock myself in my office studying for months on end, And I’d fail this test and he’d say, ‘What, do you just suck at drinking?’ And then they watch Somm and they understand what the reality is. It’s the hardest test that nobody has ever heard of.”

He became a Master Sommelier in 2015.

Brahm Callahan uses his sommelier skills as the corporate beverage buyer for the Himmel Hospitality Group, which oversees four restaurants in Boston. The most notable being Grill 23 & Bar, which boasts one of the best wine programs in the world. His relationship with Grill 23 landed him on the cover of Wine Spectator magazine.

“I jokingly recorded a video of Captain Hook’s ‘Cover of the Rolling Stone’ with Wine Spectator in the background,” Callahan says, “It was a really big deal, not just for myself but for the restaurant. That was the year we won the Grand Award at Grill. It’s the top tier wine award Spectator gives out to wine-centric restaurants. There’s like 100 in the world. They featured us on the cover.”

But how does a Master Somm keep their skills sharp during a global pandemic, when fine dining feels like the vestige of a distant past? “I haven’t been in the restaurant since March,” says Callahan. “A lot of what I did before the pandemic still applies. I was doing a lot more of the business side of the business anyway.”

But like most of the rest of us, Callahan is now doing more work over Zoom. He’s been doing a fair number of virtual tastings, not just in the U.S. but all over the world. “I used to do some consulting work and travel and do private tastings in person, which was a much bigger lift. Versus now, where I put a collared shirt on and sit down in my office chair and then I’m talking to somebody in London about wine.”

He doesn’t even need pants, but he wears them. And being the father of a 5- and a 3-year-old, it allows him to be at home with the little ones more. Master Sommelier Brahm is available for your own virtual tasting pleasure. “I’m expensive,” says Callahan. He is a Master, after all.

The Court of Master Sommeliers has not been without its controversies over the past few years, including a cheating scandal with the test, and accusations of racism and sexual harassment. “There’s been a reckoning over the last 18 months,” says Callahan, who is currently the treasurer of the board of Master Sommeliers. “We want to try and actively encourage more diversity within our community. The Master Sommelier population does not reflect the diversity that exists at other exam levels. Because the exam just takes so long to pass.”

How does the Court intend to reach out to more of the people that make up the backbone of the restaurant industry, writ large? “Through scholarships and community engagement,” says Callahan. “Directing scholarship specifically to BIPOC people, and women, and to more financially impacted students as well.”

As our mutual friend, and the only Black sommelier I know, Shelburne Falls’ Michelangelo Wescott likes to say, “Wine is a white boys’ game.” But Callahan says, “It’s not just us. It’s an industrywide issue. So, if we can get outside of our bubble and try to create more outreach and really get into communities that we haven’t traditionally had a presence in, then I think we’re going to be able to make an impact faster.” Here’s hoping.

Wine is obviously a class issue, too. “One of the things I want to do is to democratize wine,” Callahan says. “I wanna bring in people and make them feel comfortable, no matter what they’re drinking. Hence, the really crappy Pinot Grigio that I like to drink.”

He wouldn’t take my bait that Pinot Grigio is the worst grape. As someone who grew up feeling like wine was never going to be a thing that someone like me could understand, Master Sommelier Brahm has never made me feel inferior. It’s astounding how much I’ve learned from him in our few brief times drinking together here in the Valley.

And what is Somm Brahm’s go-to beverage when he’s back here in his home haunts? “I drink a lot of beer when I’m back in the Valley. I run through and try to grab all the microbrews I can.”

And culinarily speaking, his tastes are not what you might expect from one of the world’s most elite in the fine dining world. “I have to get Bueno every time I’m back in Amherst. It’s reminiscent of growing up and I just miss it. Same thing with The Hangar. I went to UMass as an undergrad.”