Stagestruck: My Year of Zoom 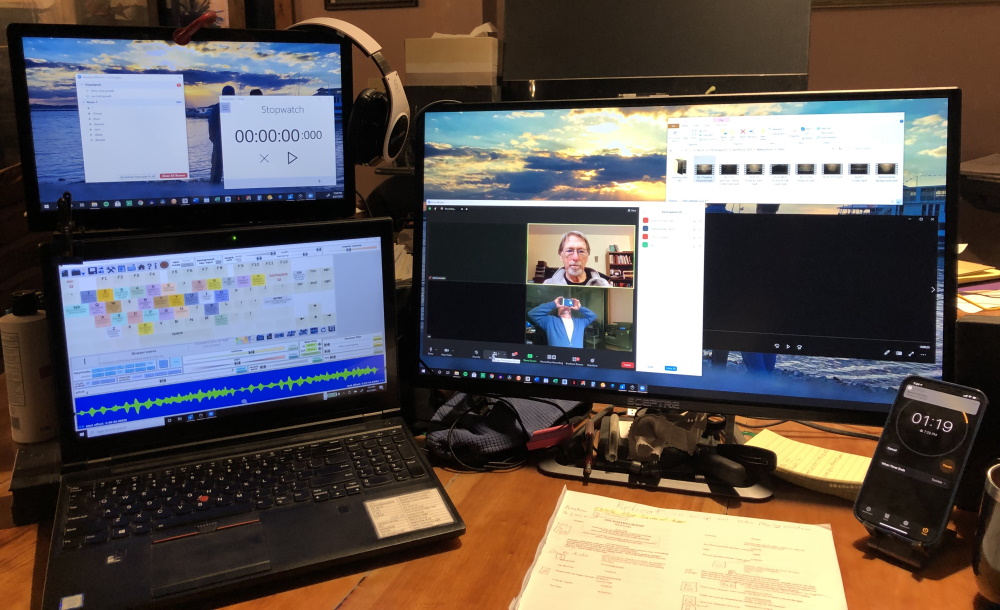 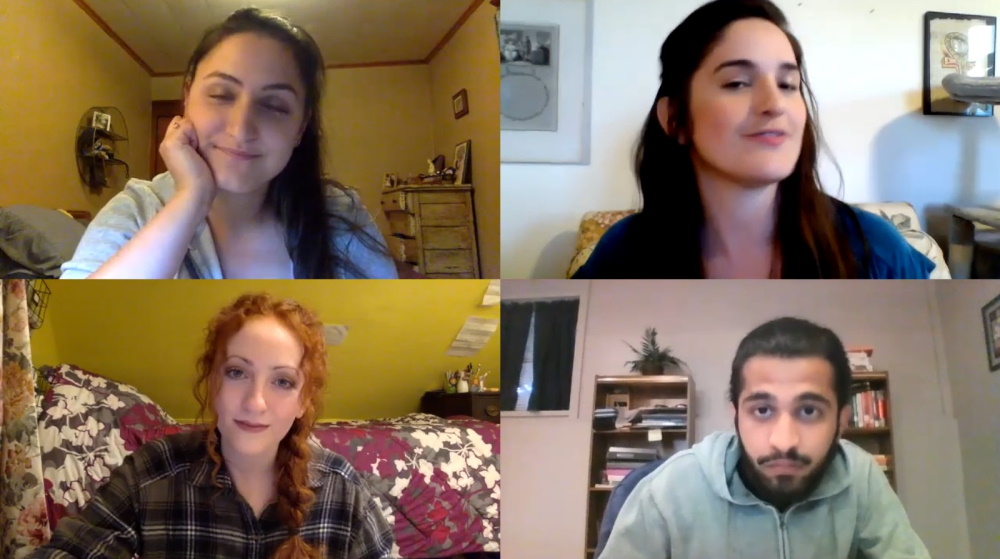 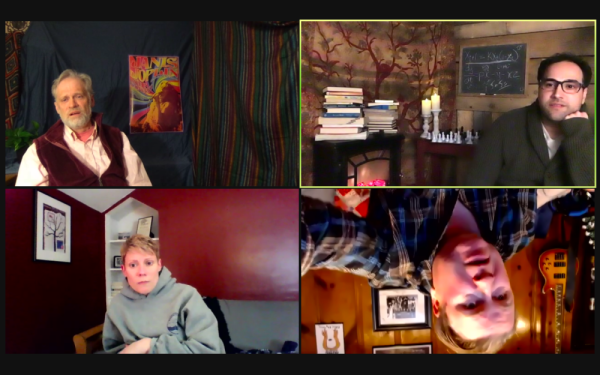 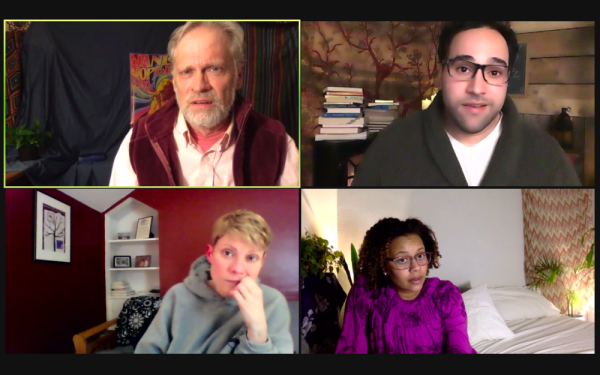 The Year of Covid shut down live theater and just about every other in-person interaction, in the arts as elsewhere. In their place: the Year of Zoom.

In the circumstances, Zoom was a blessing – a marvel of the age, allowing face-to-face contact and online performance. But it was also a curse – and I spent a lot of time cursing at it. Over the year, the drawbacks did constant battle with the benefits.

In the past year I’ve participated in four Zoom-based productions, as director, dramaturg and in one case performer, as well as viewing dozens of them from around the country and across the globe. I’m grateful for those opportunities, which made this horrendous year bearable and even rewarding. But oy. While the technical challenges were often just as intriguing as the artistic ones, they sometimes threatened to overwhelm the creative efforts.

Most of my Zoom experience was with Silverthorne Theater Company, which beginning last spring has provided a steady stream (so to speak) of virtual performances, live and prerecorded, Zoomed and filmed, readings and full productions, some adapted from other genres and others custom-made for the platform. The shows I was involved with ran the gamut from docudrama to domestic comedy, from literary satire to an allegory of Zoom itself.

The first was Days of Possibilities, an online version of Rich Orloff’s play about the student antiwar movement of the Sixties, broadcast live on the 50th anniversary of the Kent State shootings. Directed by Silverthorne’s Lucinda Kidder, it fielded a cast of 20, all of us Zooming in separately from our homes with varying degrees of Internet connectivity, sound quality and onscreen visibility. It was a sudden plunge in the deep end for everyone involved, and we came up gasping and spluttering but invigorated and intrigued, eager to jump back in the pool. 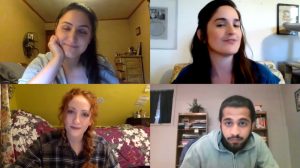 Next up, in June, was Pride@Prejudice, a play by Chester Theatre Company’s Daniel Elihu Kramer. It was written for the stage as a dramatization of Jane Austen’s novel that’s punctuated with questions and comments from the Internet. I reimagined our production as five housebound students gathered in a Zoom room to discuss the classic and act out parts of it. We tried to recognize and incorporate the platform’s limitations, rather than asking our viewers to imagine the stage play.

One of the performers was Carissa Dagenais, a Valley-based actor who is also a drama therapist. She told me later that she often “struggled to be back at my computer for rehearsals after being on Zoom with clients all day.” A surprising downside: Zoom is exhausting. Despite the comfort of sitting in your own chair, the effort to stay present and focused weighs heavily without the energy generated by physical connection. But for all the frustrations of geographic and technological disconnection, during rehearsals I sometimes sensed the barriers begin to dissolve, and there were moments when it almost felt like we were all together in the same room.

Carissa was also heartened by the worldwide access to online productions. “It reminded me of Hallie Flanagan and the Federal Theater Project. The accessibility of theater is being reassessed, as the way we communicate and connect grows and changes.” That applies to the performers too. One Pride@Prejudice cast member was in Pennsylvania, and the Zoom show I did this spring included actors living in New York and Chicago, with a series of recorded voice-overs beamed in from as far away as Australia and Bhutan.

The Suffield Players, in northern Connecticut, mounted a series of short original comedies broadcast live on the the troupe’s YouTube and Facebook feeds. I directed one of them, Marriage 2.0, by Lisa Parker, about a bickering couple “rebooting” their relationship. Thanks to tech director Jason Fregeau, the production broke the Hollywood Squares look of so many Covid-era shows.

He married Open Broadcaster Software, a free, open-source platform for video recording and live streaming, to a web-based sister program, OBS.Ninja, which can gather multiple feeds and send them to OBS for broadcast. Thus the performers, Jim Hyland and Virginia Wolf, in separate towns, appeared onscreen to be sitting side-by-side in a living room. Over time, Jason delivered ever more sophisticated production values to the series, most recently in another two-hander, in which the actors delivered asides to the audience that looked like multiple cameras were at work.

“I’m proud of our shows,” he told me recently. “They are waypoints, blaze marks along our creative path.” He added, “I’m glad virtual theater happened, and now I’m glad it’s over. Time for live theater.” (Not that everyone thinks it’s over. Some creators I know are planning to keep using virtual as an adjunct to in-person performance.)

For all its versatility, there’s one thing OBS can’t do that Zoom can, in fact was made for: active participation by a live audience. 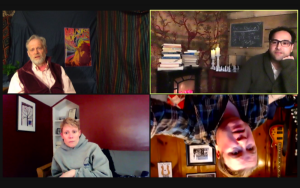 My final online show, in April, was The Waiting Room, written for Zoom and directed for Silverthorne by Steve Wangh, a longtime friend and previous collaborator in theatrical experiments. It took place in two simultaneous realities: the Bardo of Tibetan Buddhism, where spirits await their next incarnation (a sly metaphor for the liminal state we’ve all been in for the past year) and the platform itself – the afterlife as a Zoom room. I worked with Steve on editing the script and supported him as associate director.

Part of the conceit of the piece was that the audience is also in the Bardo. Some of their tiles were visible across the top of the screen, like a balcony looking “down” on the action, and a couple of times they were split into breakout rooms to chat about the experience and the play’s life-and-death themes.

“When I began to write The Waiting Room,” Steve recently recalled, “it was important to me that the play should be thoroughly infected by the Zoom reality, and that it exploit that reality as much as possible. And that,” he realized, “was a tall order.”

But using Zoom to full advantage also meant creating “stage pictures” with those constricting squares. In rehearsal, a kind of Zoom-tile choreography was developed, in which actors broke out of the usual center-screen, head-and-shoulders view into positions left and right, forward and back, precisely keyed to each other’s movements.

“In retrospect,” Steve told me, speaking for many of us who toiled in the Covid crucible, “I’d say this pandemic presented me with serious challenges – and that has been the best thing about it.”