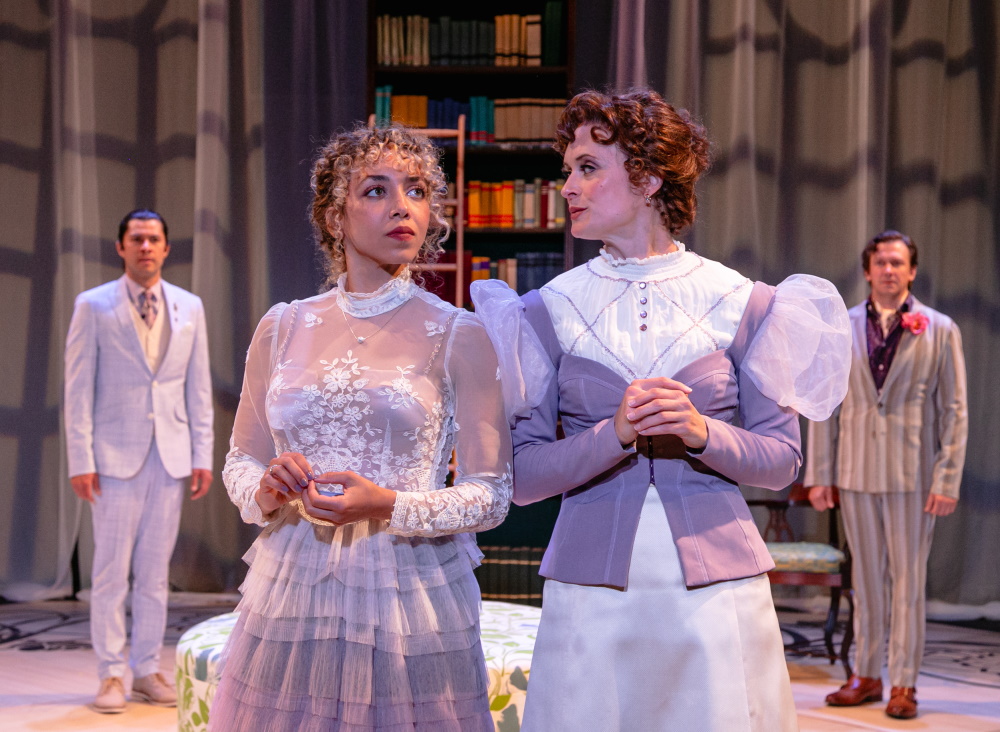 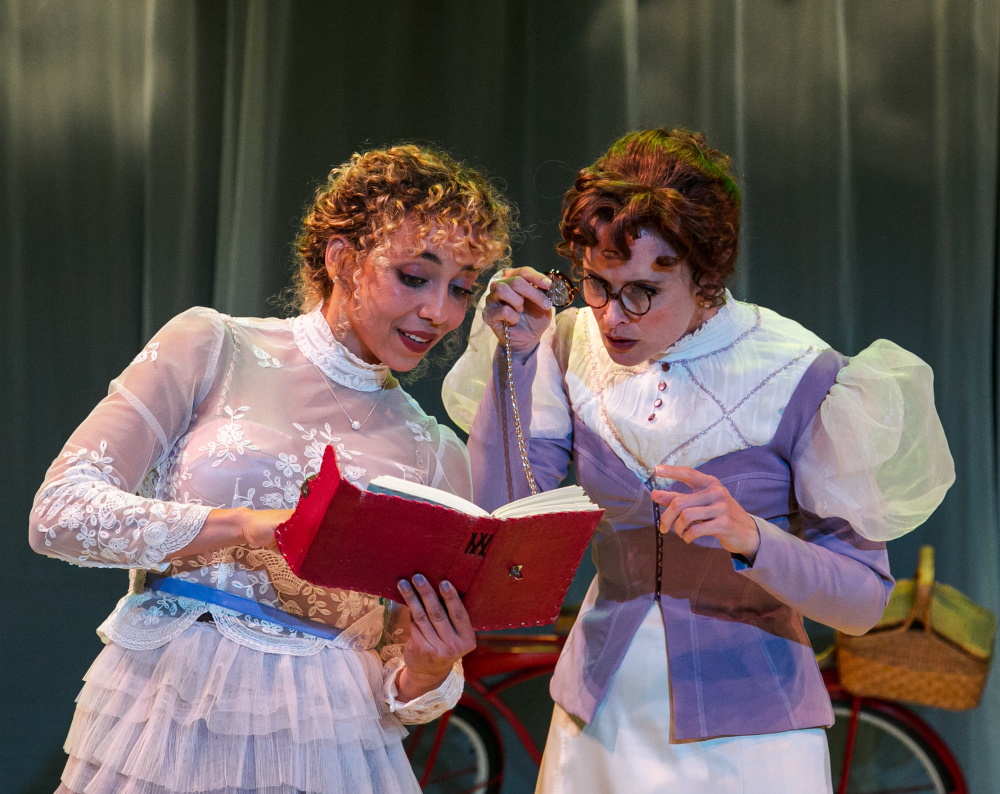 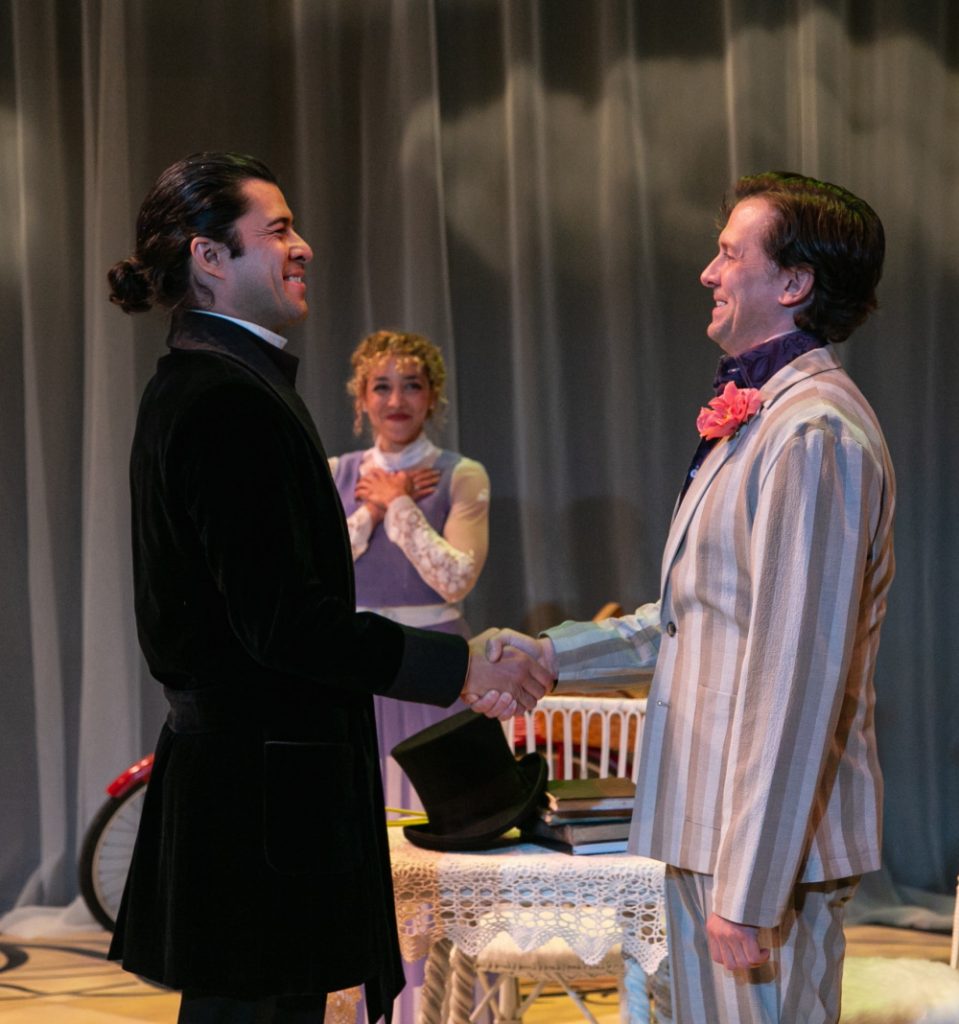 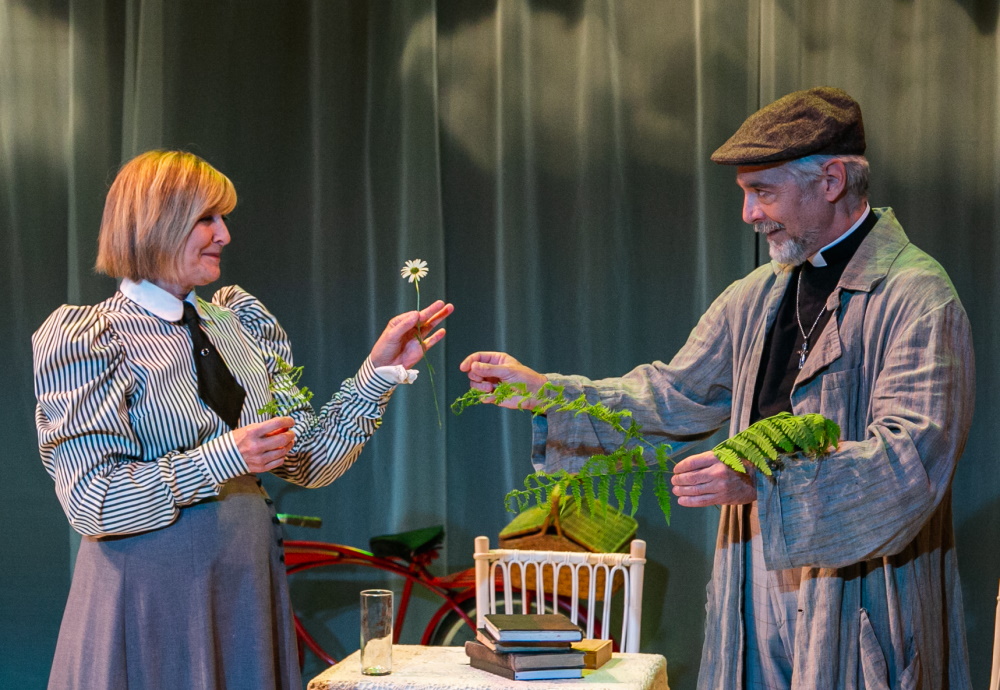 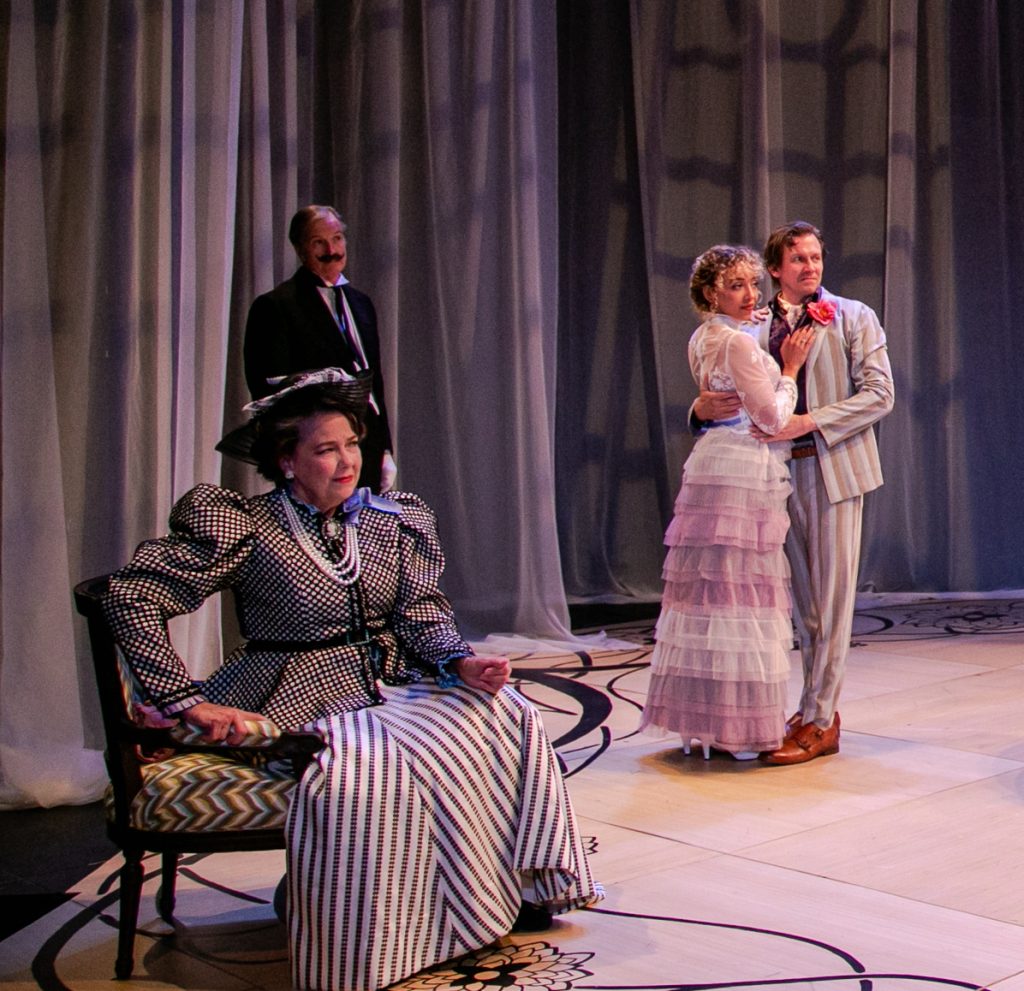 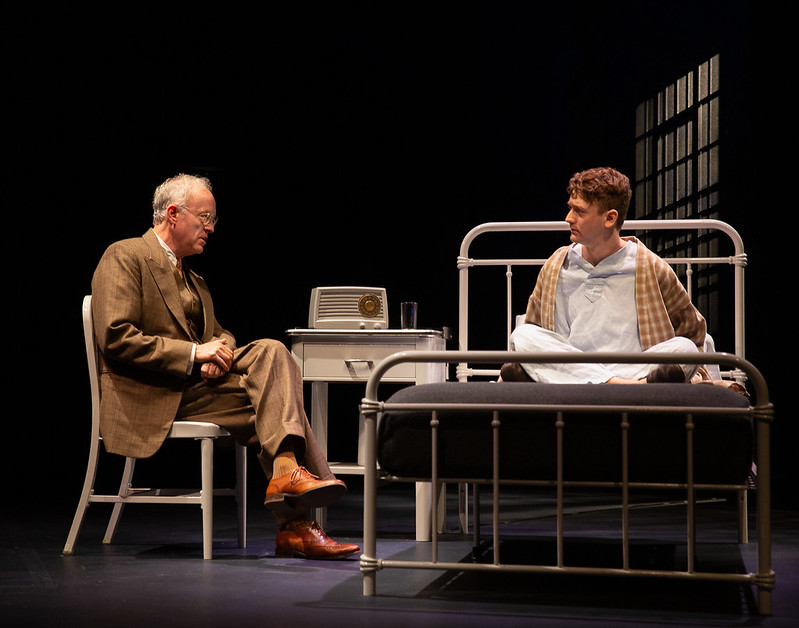 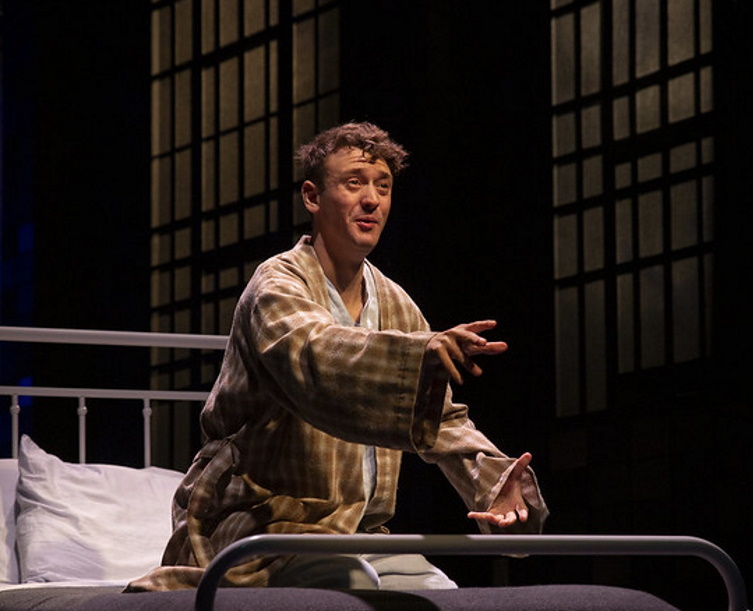 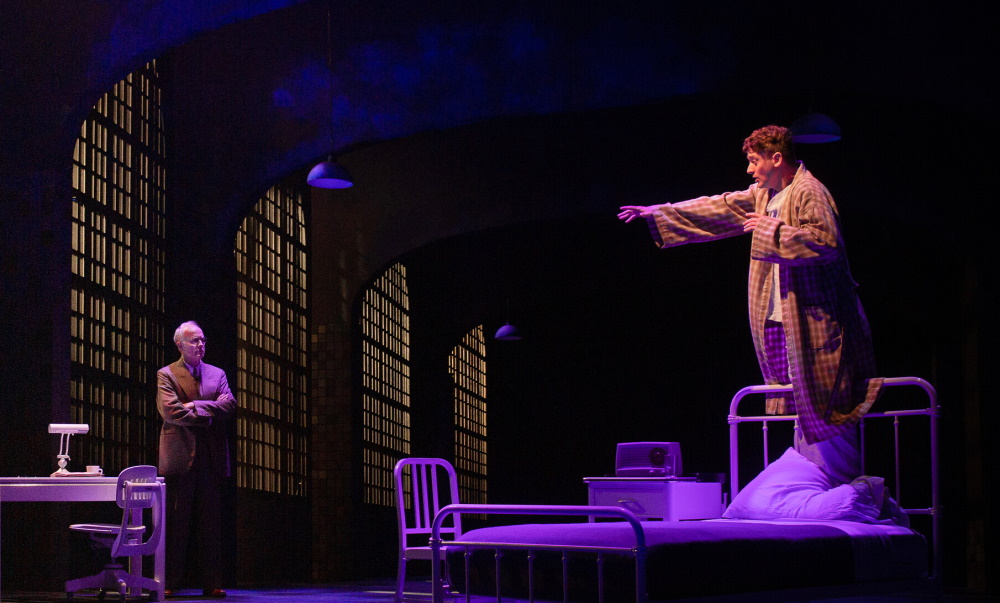 Last week, Barrington Stage Company’s Julianne Boyd greeted the audience for her troupe’s opening production, staged in a socially distanced tent at the edge of Pittsfield, with these long-awaited words: “I want to welcome you to live theater.” This week, introducing the season’s second show, in the company’s downtown mainstage, she added: “… in a real theater!”

Both of the shows I saw this week are holding forth indoors – BSC’s Chester Bailey in its remodeled, Covid-compliant auditorium, and Berkshire Theatre Group’s The Importance of Being Earnest in the intimate Unicorn Theatre on its Stockbridge campus. (Per Equity rules, masks are still required for all audiences.)

BTG’s Kate Maguire, in her own (prerecorded) opening-night curtain speech, observed that in the festival’s nearly 100-year history, “We have never missed a season” (there was one production last summer) and went on to thank the audiences and praise the artists whose talent, “on and off our stages, urge us to find our better selves.”

The Importance of Being Earnest, Oscar Wilde’s classic comedy of manners and misrepresentations, is hardly a model of that aspiration, but who cares? It is, as Wilde subtitled it, “A Trivial Comedy for Serious People,” and right now a little triviality can go down well as we tentatively emerge from that all-too-serious year-long intermission. (BTG’s production, playing through August 10, is completely sold out, but there’s a waiting list for all performances; call the box office at 413-997-4444.)

Earnest is rightly considered a masterpiece of comic style. The clockwork plot of misplaced offspring, thwarted romance and a double impersonation involving the name Earnest gives plenty of scope for some of Wilde’s wickedest bon mots, many of them at the expense of the institution the play’s young lovers are swooningly contemplating: marriage. As a Jeevesian servant remarks, “I have only been married once, and that was in consequence of a misunderstanding between myself and a young person.” Other witticisms flaunt Wilde’s fondness for the cheeky inversion: “In matters of grave importance, style, not sincerity, is the vital thing.”

In its own cheeky inversion, David Auburn’s production sports a pre-show rock soundtrack, which fades as the lights come up into Bill Clarke’s spare renditions of the play’s 1895 settings – bright white furniture against a backdrop of flowing white draperies, as gauzy as the play itself, framing Hunter Kaczorowski’s sumptuous Gilded Age costumes. 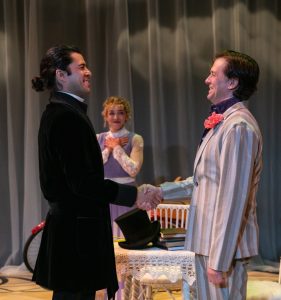 On opening night the cast were still finding the Wildean tone and pace. In the young lovers’ roles, I believed the girls more than the boys. Shawn Fagan and Mitchell Winter, as the feckless young men-about-town whose double lives provoke the play’s chain of tangles and deceptions, are its weakest links, more volume than finesse. Rebecca Brooksher, a Berkshire favorite in dramatic roles from Anna Christie to Maggie the Cat, is perfectly poised as the perfectly self-absorbed Gwendolen (“I never travel without my diary – one should always have something sensational to read in the train”) and relative newcomer Claire Saunders brings a frisky impishness to the coquettish Cecily. 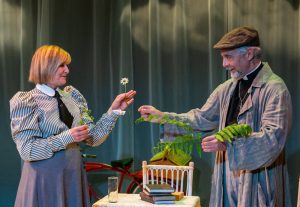 Love in the afternoon of life is sweetly embodied by David Adkins and Corrina May, also cherished fixtures of Berkshire theater and a real-life (happily) married couple, as a bashful cleric and a prim governess. And there’s a funny meta moment, when Matt Sullivan transforms from one butler into another before our eyes.

Best of all is Harriet Harris, as the elderly gorgon Lady Bracknell, the high-handed arbiter of propriety and marriageability. Not the usual imperious battleax, here she’s a beady-eyed old bird, part pigeon part hawk, even showing a little frailty when her feathers are ruffled.

We get a double helping of Harris this summer, as she moves next month from Earnest to Eleanor, a portrait of another formidable lady, Mrs. Roosevelt.

The title character in Chester Bailey, playing at Barrington Stage through July 9th, is the mutilated survivor of a surprise attack; his doctor, the other character in this two-hander, is a survivor of a different sort. Their intersecting journeys are, as BSC’s publicity puts it, “not what either man expected.” 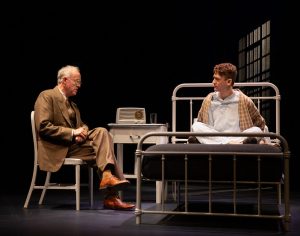 Nor are they at all what we expect. The play’s theme and structure are in the mold of “physician, heal thyself” dramas: two damaged souls, one whose wounds are external, the other’s hidden but gnawing, leading both of them through pain and loss to understanding and acceptance.

But Joseph Dougherty’s brief, enthralling play confounds expectations at every turn, from the setup to the payoff. For starters, it’s set at the end of World War II, when soldiers are returning from the battlefield scarred inside and out; Chester’s not a soldier, though, but a civilian working in the Brooklyn Navy Yard, a job his parents wangled so he wouldn’t be drafted. The irony is painful.

Blinded and behanded by a vicious on-the-job assault, Chester denies the truth that he has no eyes or hands – and then begins to see and to grasp: phantom-limb syndrome played out in elaborate fantasies spun from fleeting memories. 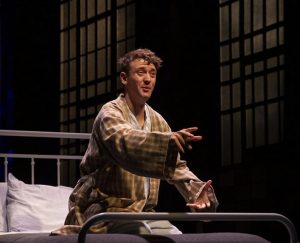 Chester Bailey was last seen at the Contemporary American Theater Festival in Virginia in 2019, directed by Ron Lagomarsino, who has restaged it here with the same cast. They are Reed Birney and Ephraim Birney, father and son. Reed is a Tony-winning actor with a long, distinguished resumé on stage and TV; Ephraim is a comparative newcomer, but there’s not a whiff of nepotism in these two stirring, pitch-perfect performances. 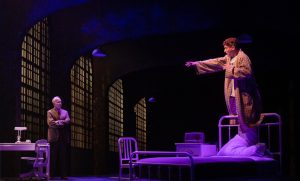 We see the patient as he sees himself, no bandages or prosthetics here but a strong, vibrant young man, full of naïve enthusiasm as he relives the dances at Luna Park and the pretty girl he glimpsed at Penn Station, who miraculously turns up as a nurse in his hospital. (Beowulf Boritt’s set – tiled walls framed by arches receding into shadows – and Peter Kaczorowski’s moody lighting take us through time and space.)

This is a play in which salvation lies not in acceptance but in the power of imagination. As Dr. Cotton says, “We underestimate the brain.” Chester escapes into sheltering delusions, an alternate reality that evades the horrible truth. The doctor adds, “If there’s one thing reality can’t tolerate, it’s competition.”

There’s no final breakthrough here, no coming to terms. But there is a kind of happy ending – a heartbreaking one.

The Importance of Being Earnest photos by David Dashiell
Chester Bailey photos by Emma K. Rothenberg-Ware