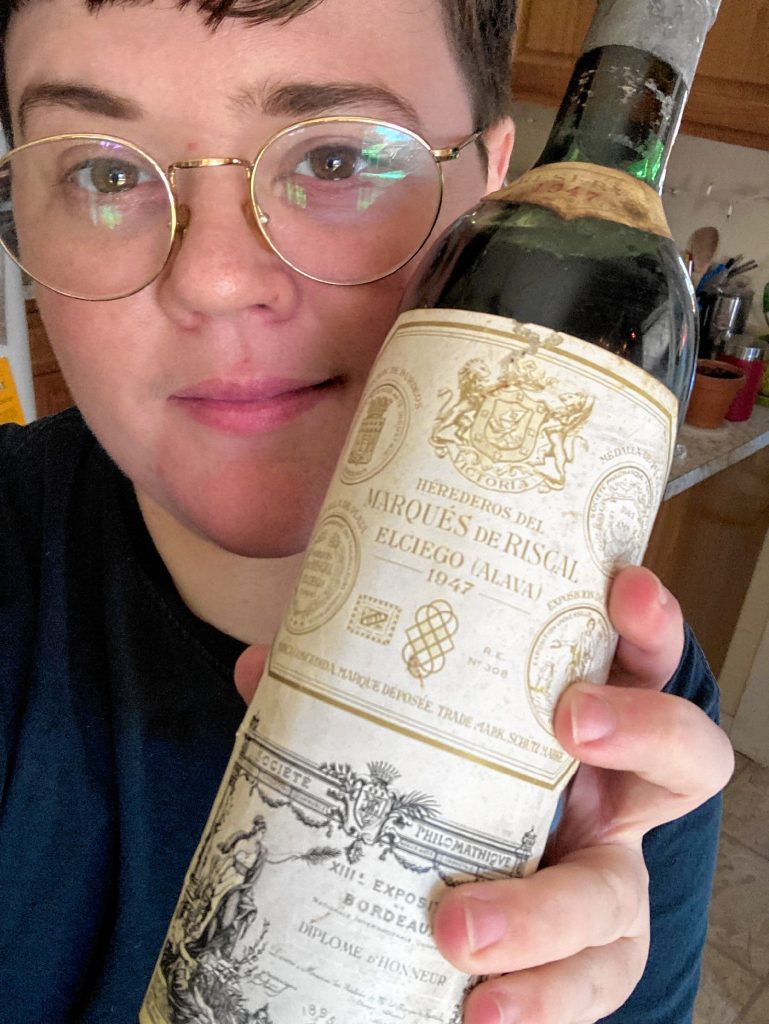 Ken Washburn, 31, discovered wine in their early 20s, spent some time perfecting their skills in Dallas, which is also where they came out as trans. They now live in Turners Falls and are ready to dole out wine advice, even if drinking it gives them a headache.

Why does wine give some people headaches? A commonly sighted cause is a plant chemical found in grape skins called tannins. But tannins are also found in things like tea. Others site sulfites. Sulfur is a naturally occurring element, and while sulfur is sometimes added to growing wine grapes, lots of food like dried fruit and sauerkraut have sulfur. Maybe it’s wine-hypochondria. Or maybe it’s just bad luck physiology. What if you dedicated your life to wine and your body decided to reject your decision?

That’s just what happened to Ken Washburn. They are almost 31. They live in downtown Turners Falls and a few years back we met not far from there at The Lady Killigrew at The Montague Bookmill. I was drinking the house wine. And Ken was eager to have someone to talk about wine with. But Ken was not drinking any wine. Though Ken loves the food there.

“I’ve been getting the same sandwich for 11 years,” they said, “It’s the apricot brie sandwich.”

Originally from Dallas, Ken went to boarding school in the Berkshires, dropped out of college their junior year, then moved to Berkeley where their parents were living.

“I was depressed. I got a job washing dogs,” Ken says, “I went out to lunch one day and got a beer with my mom. She had not finished college. And, as someone who hadn’t completed a formal education, that was what she wanted for me.”

Ken’s mom hatched a plan. “She said ‘Hear me out. I think you should go to school and study wine.’” Ken thought, “Why on Earth would I do that?” But sometimes mother knows best. “My mom said, ‘You like being really good at things and you’re great at working with rich people. You know how to make them happy.’ And I was, like, ‘I AM really good at that!’”

Ken’s mom had given Ken’s wine career a lot of thought. She had already found the school — The French Culinary Institute. “The class was taught by three Master Somms.,” Ken said. “I think one of my professors was nabbed for sexual harassment.” The suburban San Jose school is no longer there. “It was above a Gold’s Gym,” Ken said. But the school assured its students they could pass the Level II Sommelier exam if they did well in the class. And that’s just what a 21-year-old Ken did.

Soon after they passed, Ken became the buyer for a Spanish and Portugese import store in Berkeley. “That was the best job I had in the industry. I totally regret leaving it,” Ken said.

As a person in their early 20s, one might not realize they are in a dream job. It was around this time that Ken came out as trans. “It’s one of those things that I knew, but was obscured for me. If someone had told me as a child ‘you’re trans’, I would’ve said that’s obvious.” But Ken didn’t want to be trans in Dallas. “There is a reason why so many of those people on ‘The Bachelorette’ are from Dallas,” Ken said. “It creates those kinds of people. Really shiny hair. $1,000 bags. And I was, like, ‘I have tattoos that I gave myself.’”

Ken felt othered in Texas. “When I was a wine rep in Dallas, I had to look a certain way,” Ken said, “Texas is the worst and I love it so much. It is always doing the wrong things in such a spectacular way.”

The wine industry helped put a fine point on Ken’s two selves. “When I was in wine school, I was doing fancy things,” Ken said, “like going to nice restaurants and wearing blazers.” But then Ken would go back to the punk house where they were staying, to listen to records and smoke cigarettes in the bathtub. “We would all give each other tattoos in this very queer sort of crusty existence.”

Ken’s two lives didn’t mix. Ken asked themselves, “Do I want to be unapologetically queer and trans and covered in tattoos, or do I want to be able to feel comfortable on Martha’s Vineyard?”

Ken made their choice. When it was time to pick a new home, Ken remembered their boarding school days in the Berkshires and picked the Valley. “It’s the natural choice for a queer person who doesn’t want to live in a city.”

But it wasn’t just Texas or the prejudices of society that made the world of wine problematic for Ken. It was their own body. “I started getting migraines four years after getting my Level II. It made drinking wine a lot less fun.”

One may ask, “why not just sip and spit?” But that takes all the fun out of it. “It’s a fun industry to be in,” Ken said, “You drink. You get a little buzz. But now it’s like you’re gonna be the designated driver for the rest of time.”

Ken wishes the migraines would go away. “I want my life back! I have a lot of wines on my bar that I just don’t touch. I try to drink wine every once in a while. I had a great Verdejo at The Gill Tavern the other day. I had a migraine for 24 hours.”

I asked Ken if they could drink wine migraine-free right now, what wine would they have? “My favorite wine I’ve ever had … and it’s so niche,” Ken said, “It’s from a little place in Portugal called Colares. It’s just west of Lisbon, so it’s on the beach. The vines are under sand so it’s pre-phylloxera.”

Phylloxera is a louse that decimated European viticulture in the 1860s. The sand protected the Colares. It’s now one of the smallest wine appellations in the world and the acreage is constantly threatened because people want beachfront property. “It was the best wine I ever had,” Ken said, “It was such an experience. I think about it all the time.”

Ken now works at the Leverett Coop, who have a surprisingly good wine selection for a small, off-the-beaten-path store. But Ken is not working with the wine. “I am humbly making pizzas,” Ken said. But they love the wine selection there. Everything is under $15. “The woman who does the wine buying is great,” Ken said. “There are wines that I walk by and I think, ‘I’m so glad we have that.’ We have a Cremant de Limoux. I love seeing it there.”

There is a grocery store much closer to where Ken and I both live in Turners called Food City. I love that store, but their wine selection leaves a great deal to be desired. “There’s one wine I like at Food City,” Ken said, “The Lab.”

I also love this wine. For a cheap, red blend from Portugal (with a Labrador on the label) it’s a home run. “I feel like this whole conversation has been an ad for the wines of Spain and Portugal,” Ken said.

Who knows why Ken gets a migraine when they drink wine. But it can’t be easy when your body disagrees with your mind about pursuing your heart’s desire. Ken says, “When I walk into wine stores now, I find myself working. I face bottles. I talk to strangers. I recommend wines. It’s some part of me that I just can’t get rid of. And it’s fun.”

Ken is fun. And hilarious. And is willing to take some meds and risk migraine to drink a 1947 Rioja with me. I’m looking forward to it. “No one wants to talk with me about wine anymore, because I don’t really know wine people anymore. So, this is very fun for me.”

Maybe Ken is looking forward to it too.