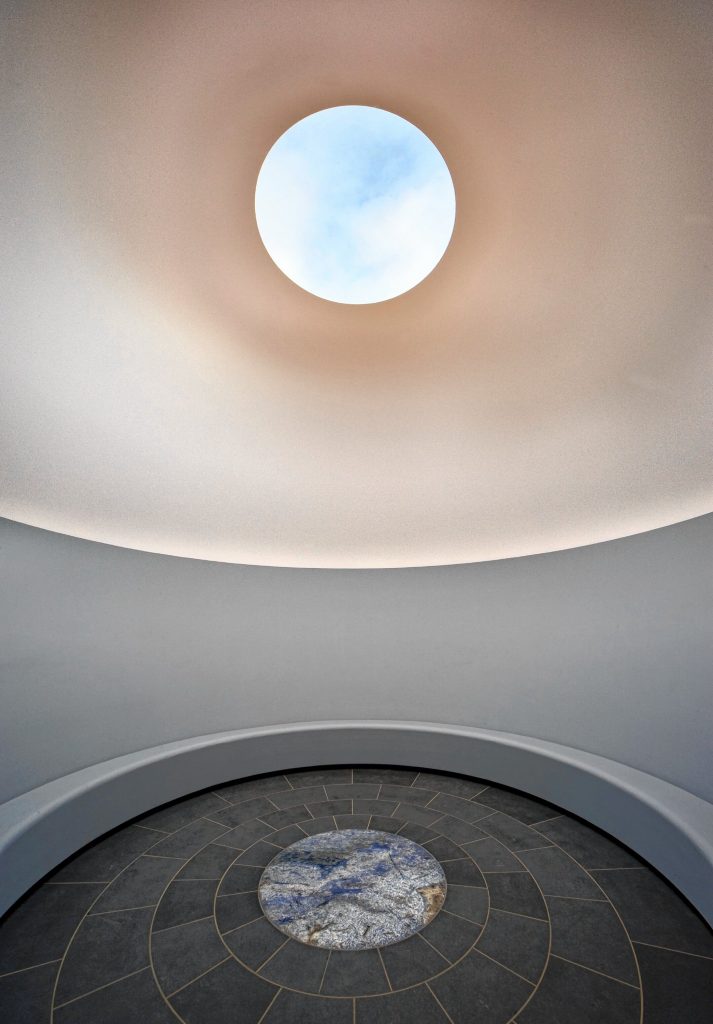 “Within Without,” a skyscape by James Turrell, who has an extended series of works on view at MASS MoCA. 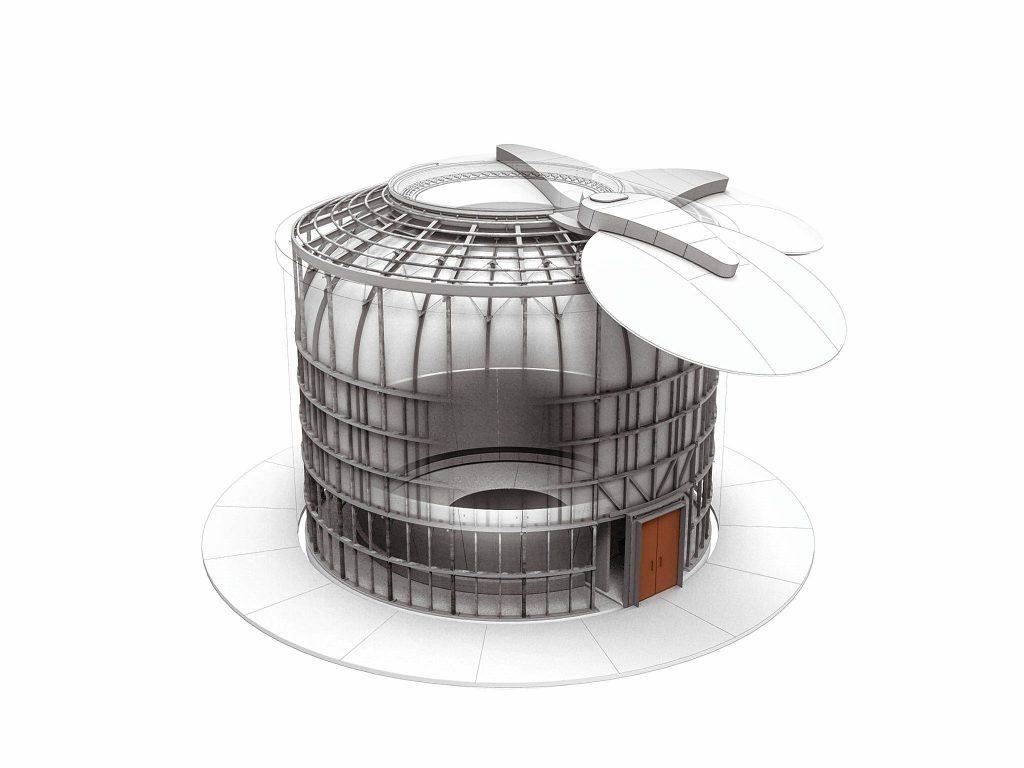 Graphic image of the redesign of an old water storage tank at MASS MoCA that is now part of an extended exhibit of the work of artist James Turrell. 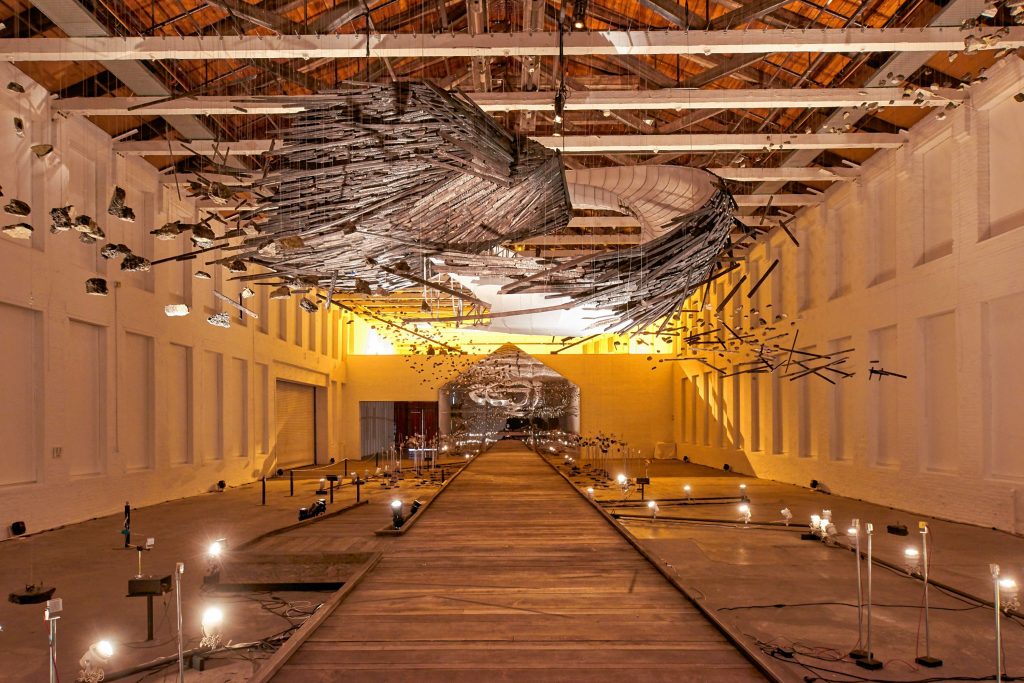 A long-range view of “In the Light of a Shadow” at MASS MoCA. 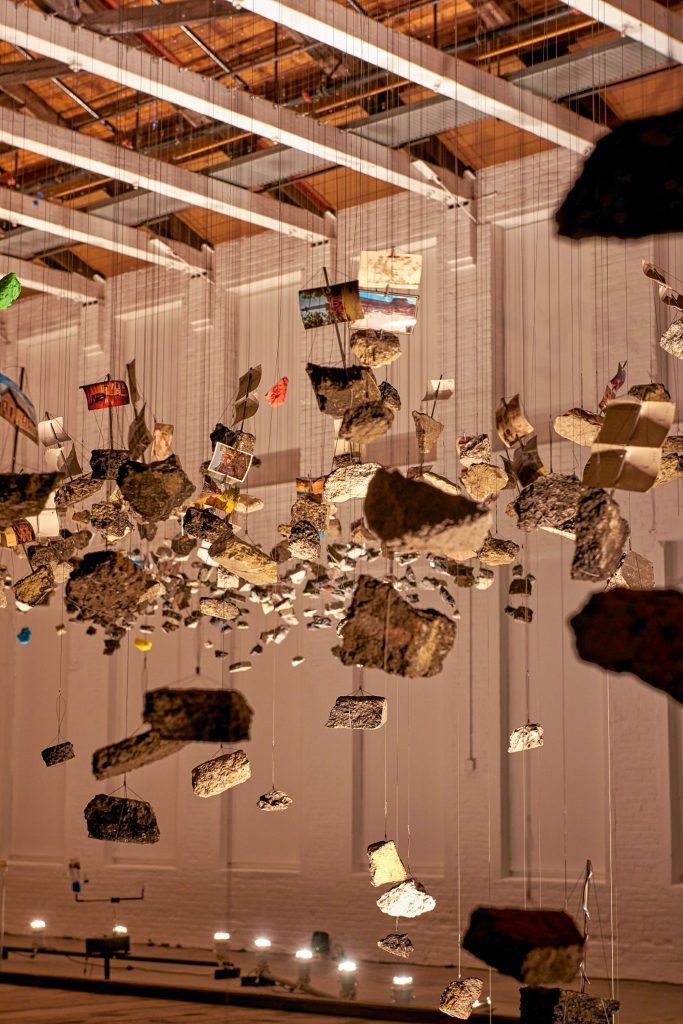 Detail from “In the Light of a Shadow” at MASS MoCA. 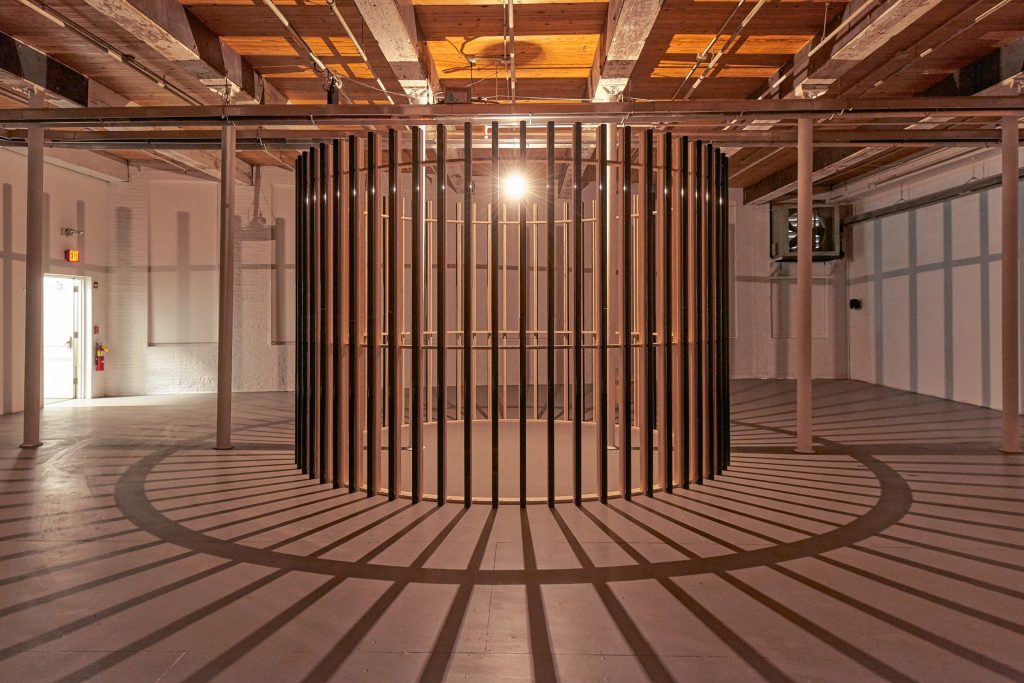 “Revolutions,” a freestanding part of Glenn Kaino’s installation “In the Light of a Shadow” at MASS MoCA. 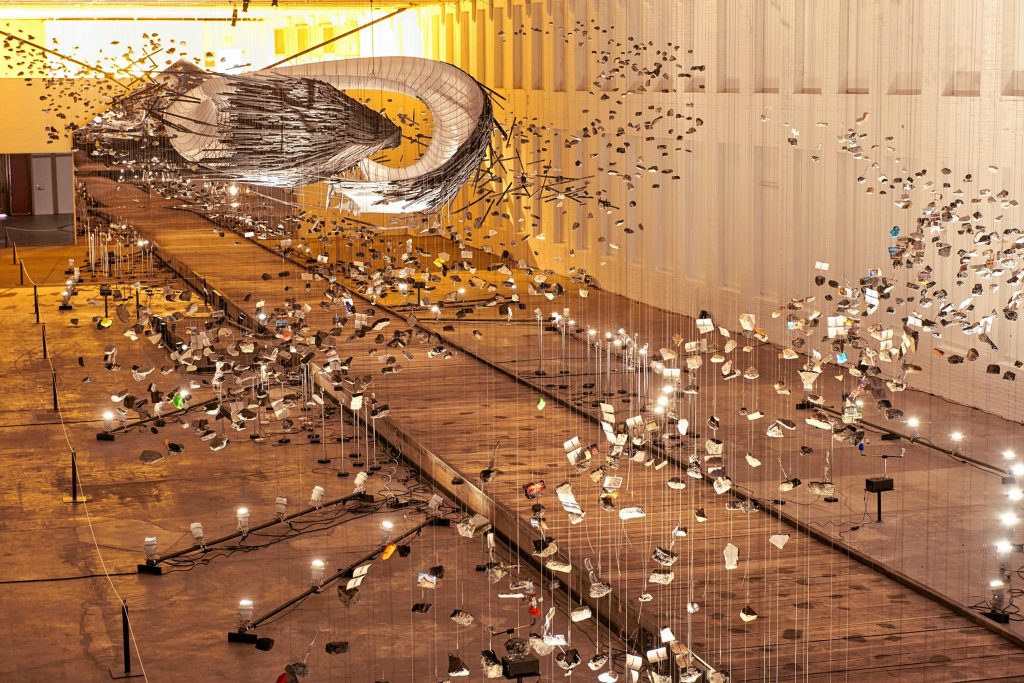 An overhead view of “In the Light of a Shadow,” an installation by Glenn Kaino at MASS MoCA inspired by protest movements. 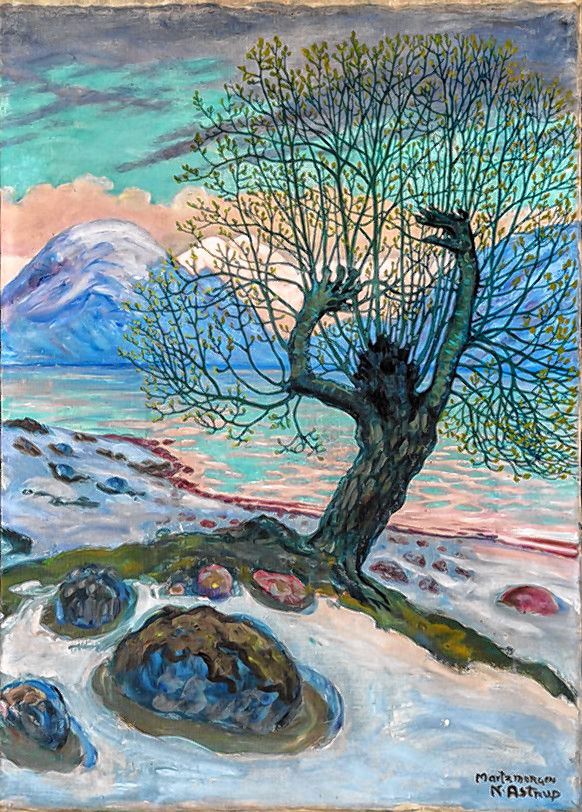 “A Morning in March,” 1920 oil painting by Nikolai Astrup. 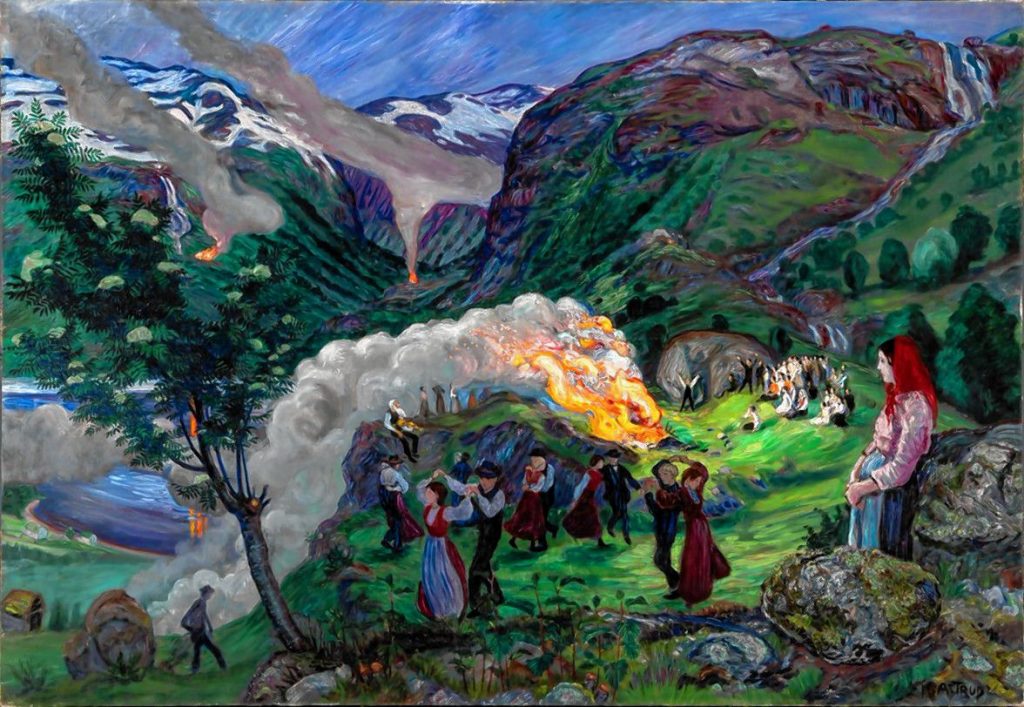 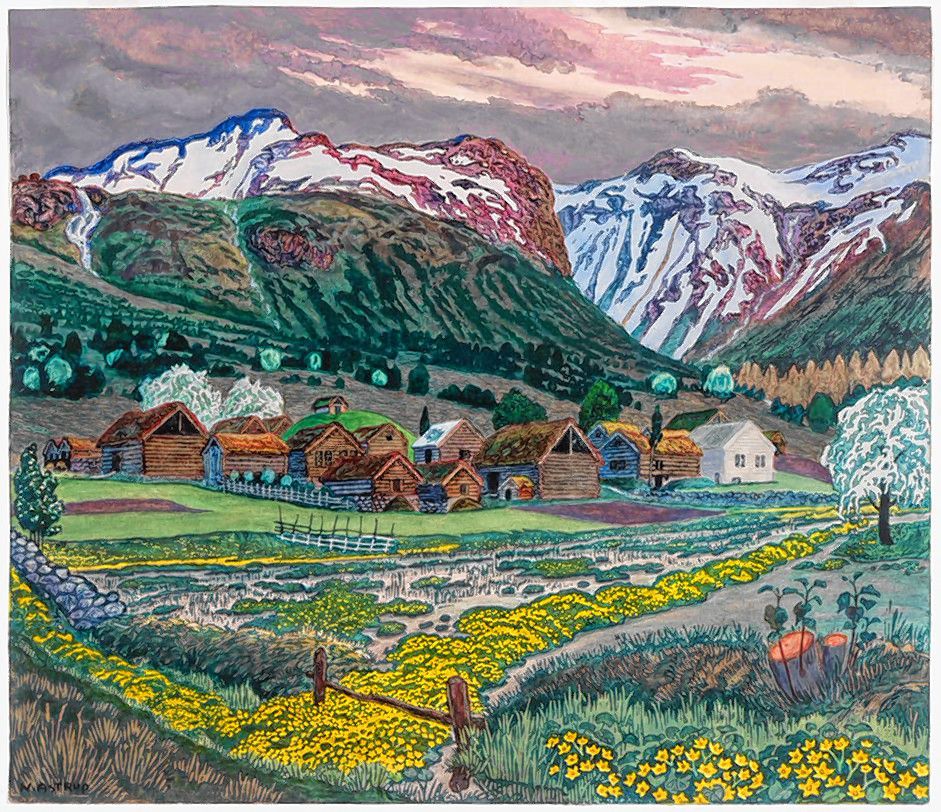 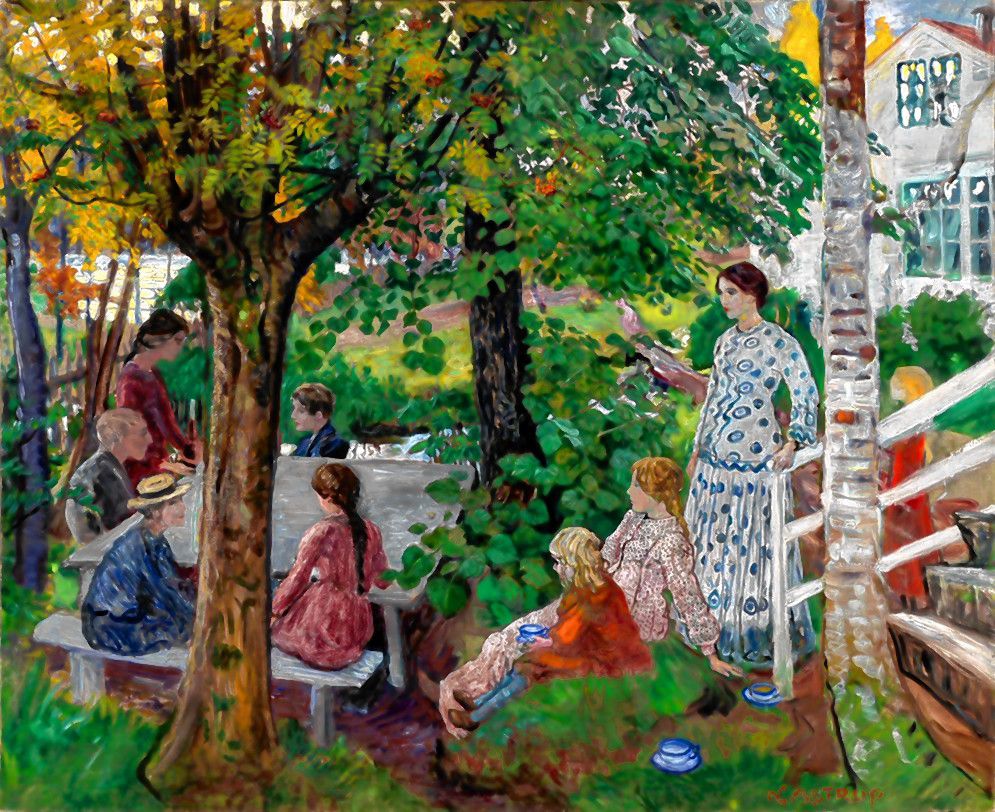 “Birthday in the Parsonage Garden,” oil painting by Nikolai Astrup. 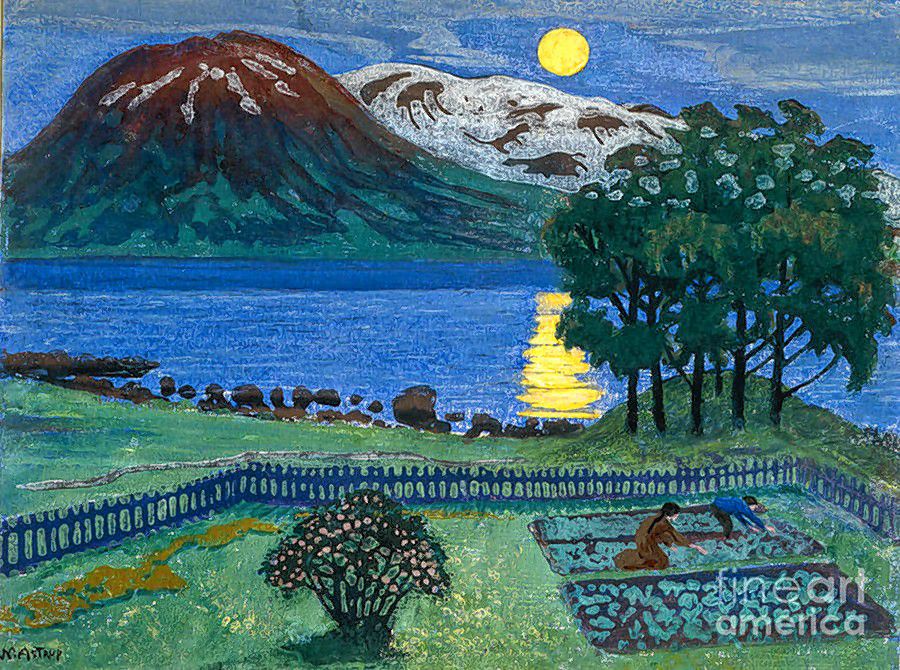 “The Moon in May,” woodblock print by Nikolai Astrup.

Summer’s here — how about a road trip? With a wealth of new exhibits on display, MASS MoCA in North Adams and The Clark Art Institute in Williamstown have a lot to offer in the northern corner of Berkshire County, either for a long day trip or over a weekend. Here’s a look at some key things to see at the two museums.

James Turrell, “C.A.V.U.” at MASS MoCA — For over 50 years, artist and pilot James Turrell has been creating unique installations, known broadly as “skyscapes,” that examine light and space, with an eye to trying to grasp the depths of human perception. He’s an experienced pilot who, as his website puts it, “considers the sky his studio.”

At MASS MoCA, Turrell’s latest installation, “C.A.V.U.,” adds to a series of his works from throughout his career that have been on display at the North Adams museum since 2017. Called “Into the Light,” these installations show how his practice has evolved over the years. Now “C.A.V.U.” speaks to Turrell’s experience in turning what he sees as a pilot into art, as in aviation circles the acronym stands for “ceiling and visibility unlimited.”

In his career, he’s fashioned dozens of installations for museums and private collectors in which he’s used wall and ceiling openings, mirrors, lighting technology, differently painted walls and other means to offer viewers different perceptions of space, light and color.

“C.A.V.U.” has been placed within an old, cylindrical concrete water tank, extensively redesigned, that now has a retractable roof dome that is opened at dusk and dawn to allow limited natural light to enter and be complemented by “subtle interior lighting,” according to exhibit notes. During full daylight, the dome is sealed and “transformed into a tightly controlled multi-sensory environment,” with light and sound projected across the interior walls and ceiling.

As well, the new exhibit includes behind-the-scenes “making of” drawings, including hand sketches and other preparatory materials used in the development of “C.A.V.U.” MASS MoCA has also opened an exhibit of ceramics Turrell has made called “Lapsed Quaker Ware,” basalt tableware that’s inspired by a the work of an 18th-century English potter, Josiah Wedgwood.

Glenn Kaino, “In the Light of a Shadow” — Some five years in the making and planning, “In the Light of a Shadow” is a massive installation about the length of a football field in MASS MoCA’s Building 5. Kaino’s initial goal with the project was to draw a connection between an infamous civil rights march in Selma, Alabama in March 1965 and a protest march in Derry, Northern Ireland in January 1972.

In both instances, protesters were attacked, in Alabama by police and in Northern Ireland by British troops. In the latter episode, which came to be known as “Bloody Sunday,” 14 civilians were shot to death and 12 others wounded.

But Kaino, a Japanese-American artist from California, says he expanded his concept in more recent years to invoke events such as the death of George Floyd at the hands of Minneapolis police in May 2020. “Just as we couldn’t imagine the state of the world when we began five years ago, we hope that the work on display inspires viewers to think differently about where we’re headed next,” he writes.

Much of “In the Light of a Shadow” follows an elevated boardwalk that takes viewers past hundreds of objects suspended from the ceiling or raised from the floor on thin rods: sticks, stones and boulders, pictures and postcards, figures of protesters carrying signs with single words such as “revolutionary.” Special lighting transforms some of these objects into shadows of different forms, such as birds and ships, along the walls.

Overhead is a huge, snakelike sculpture that recalls the 1979 assassination of a leading British naval officer by the Irish Republican Army, which hid a bomb on his fishing boat. There’s also a circular, cage-like sculpture, “Revolutions,” made from suspended metal bars. Each is tuned to play a specific musical note when hit with a baton, and if struck in sequence, the bars play the melody from “Sunday Bloody Sunday,” the 1983 U2 song that commemorates the massacre in Derry.

An accompanying video shows Paino’s collaborator, Deon Jones, inside the sculpture, as well as photos of Jones at the hospital after he was shot in the face with a rubber bullet by police during a protest in Los Angeles last year following the death of George Floyd.

Also of new note at MASS MoCA is “You Walk…” by Shaun Leonardo, an installation that combines text prompts, two-way mirrors and mock windowscapes designed to reflect “a shared physical present” but that also allude “to the singular differences that can affect one’s perspective,” as exhibit notes put it. It’s the inaugural exhibition of a new community engagement space at the museum, created with funding from the National Endowment for the Arts.

For more information on these and other exhibits and events, visit massmoca.org.

Nikolai Astrup: “Visions of Norway,” at The Clark Art Institute — Among a number of summer offerings, The Clark on June 19 opened “Visions of Norway,” which the museum says is the first-ever North American exhibition focused on the work of Nikolai Astrup (1880–1928), considered one of Norway’s greatest painters. His work was inspired by, among other things, his country’s landscapes and folktales, Japanese prints, and some of the artistic trends in turn-of-the-century Paris.

Astrup, who was also a printmaker, was known for his colorful palette and a certain measure of magical realism in his landscapes showcasing Norway’s rugged mountains, fjord-like lakes, and villages of traditional wooden buildings. “A Morning in March,” for instance, depicts a lone tree beginning to blossom against a backdrop of snowy mountains — but the tree’s short trunk has a humanoid shape, with two distinctive arms, fingers and a shadowy head, like something out of Tolkien.

There’s a carnivalesque feel in some of his work, such as “Midsummer Eve Bonfire,” a 1917 print whose swirling lines and colors recall the work of Vincent van Gogh. On a mountain ridge, couples dance, other people raise their arms in joy, and an elderly man plays the violin. Smoke from a large fire billows over part of the ground, and a pregnant woman watches from one side, invoking a sense of the event as a celebration of fertility.

By contrast, “The Moon in May,” a woodblock print, has a quieter sensibility, showing the moon floating above two rounded mountains and casting a line of yellow across a quiet lake; two figures work in a garden in the foreground in a scene that could be from a Japanese print. The oil painting “Birthday in the Parsonage Garden,” by comparison, offers some of the trademarks of pastoral European paintings from the late 19th century.

“Few artists have created such a singular style, so heavily influenced by a very specific sense of place, as did Astrup,” said Clark Director Olivier Meslay in a statement. “His love of nature, of his Norwegian homeland, and of Nordic folklore and traditions are palpable components of his work.”

For more information on “Visions of Norway,” which runs through Sept. 19, visit clarkart.edu.