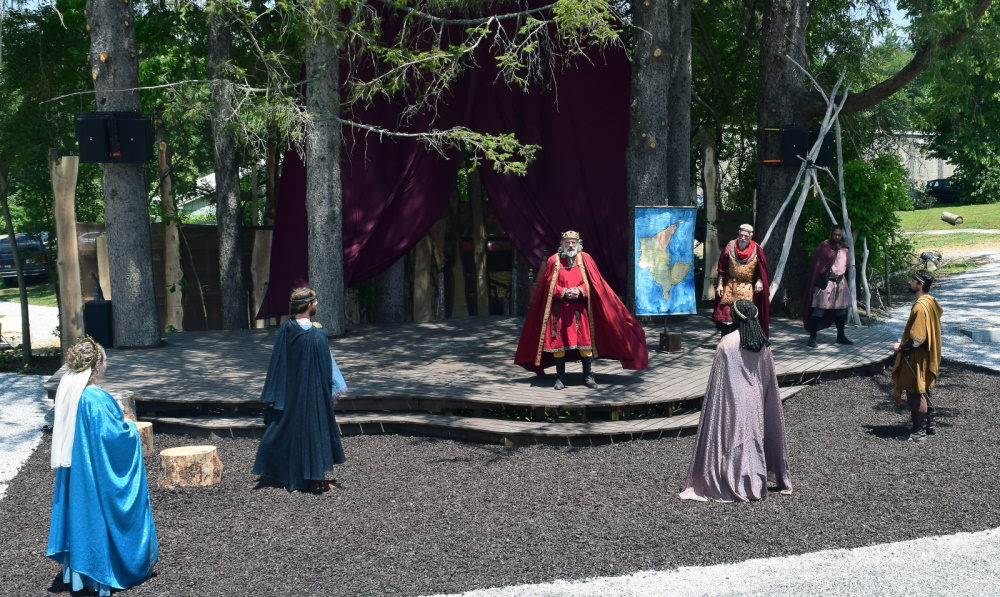 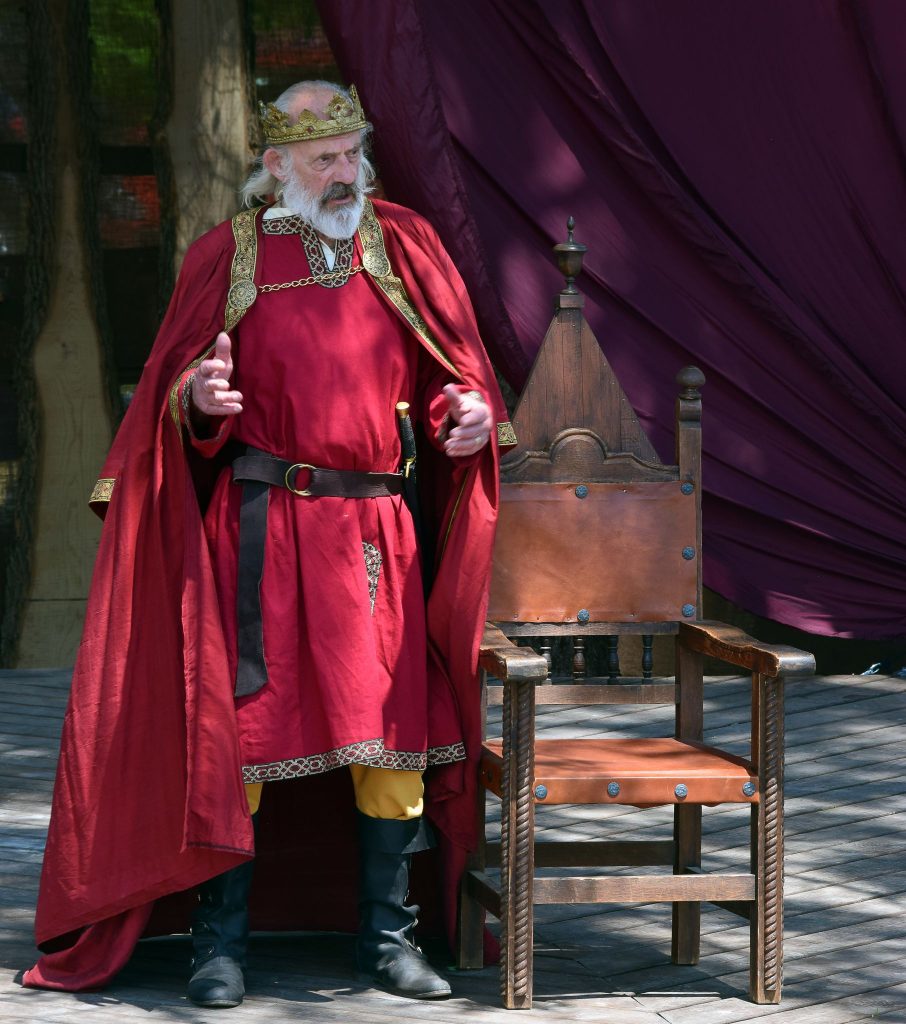 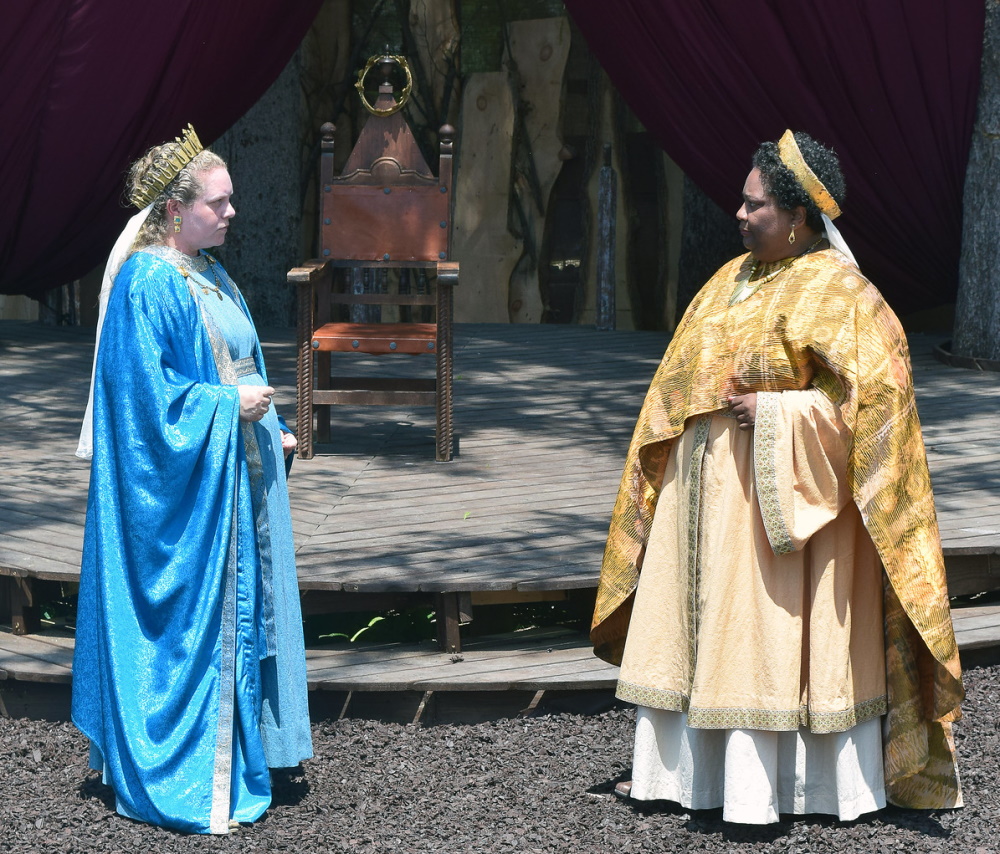 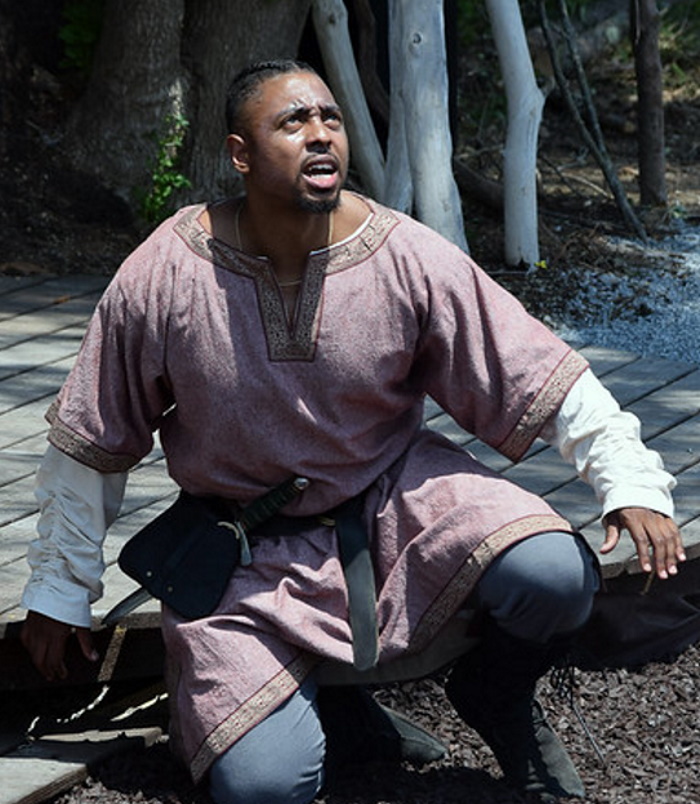 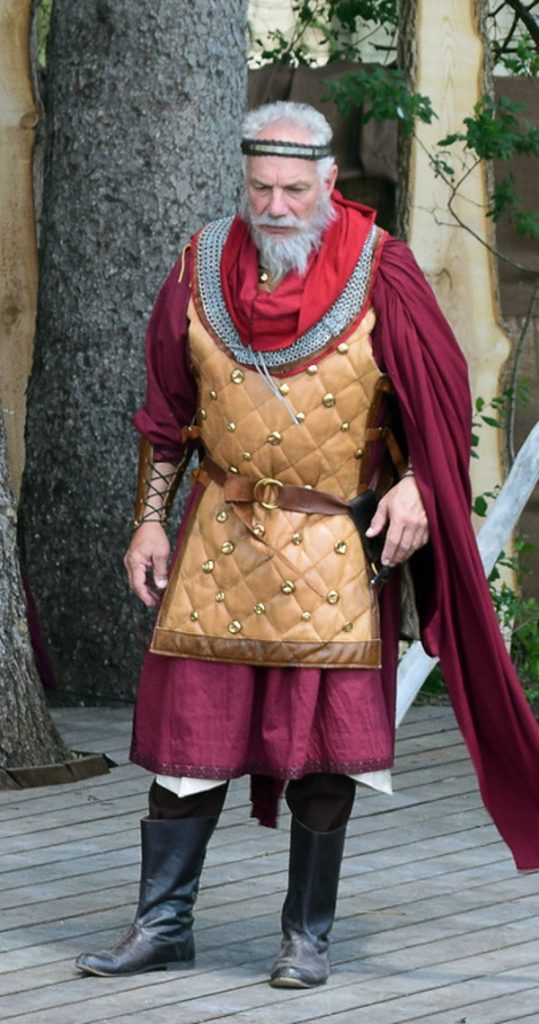 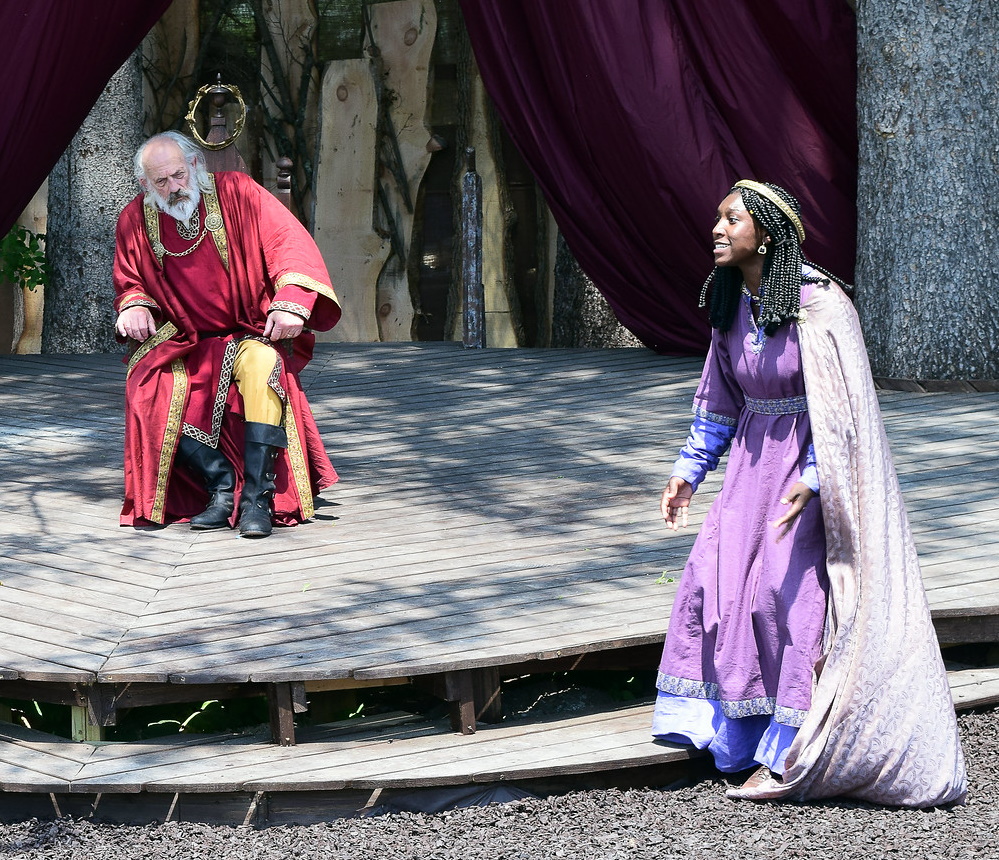 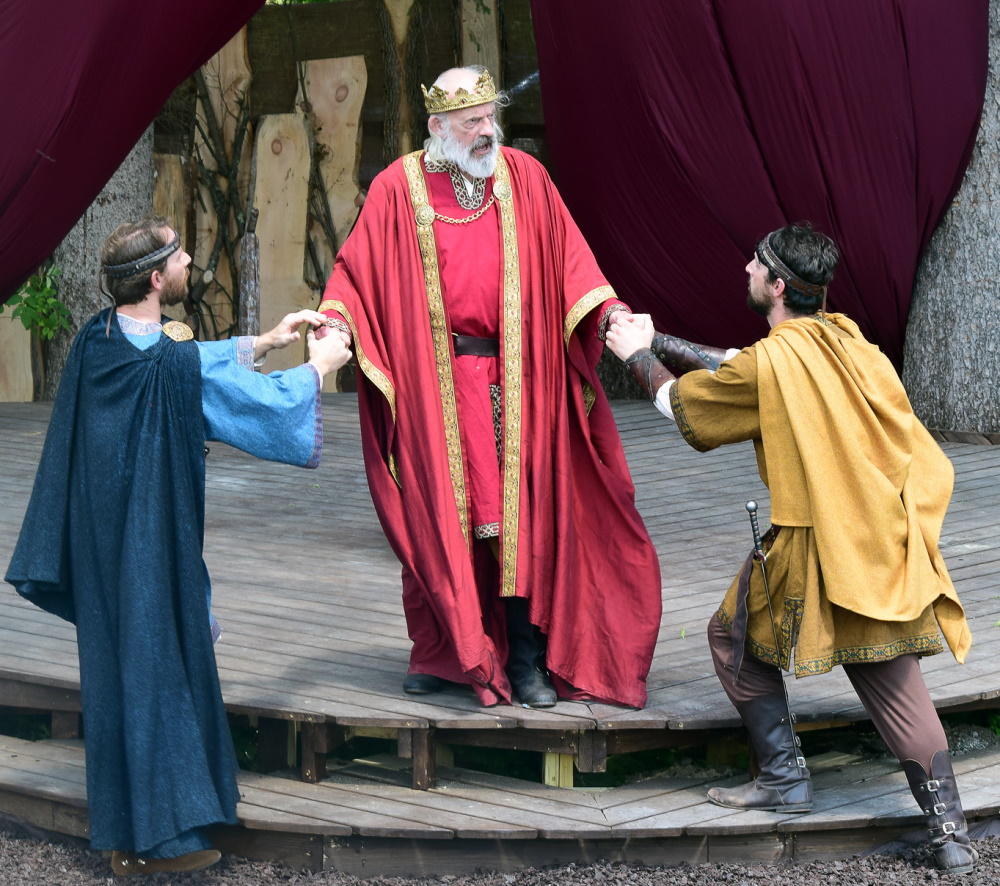 Shakespeare & Company’s King Lear, the first show to open on its Lenox campus in a year and a half, marks another return of live theater after the long intermission. It’s also the inaugural production in the troupe’s new outdoor amphitheater, a handsome addition to the company’s stages that brings its history full circle. So it’s especially disappointing to report that this production falls so short of anticipation.

The New Spruce Theatre boasts a simple platform stage backed by a wall of living trees, flanked on three sides by banked, viewer-friendly seating. The picturesque setting recalls the company’s woodsy mainstage at the Mount in the early years, and it’s good to hear the rustling of the branches and the twilight birdsong. The siting choice has an unintended consequence, though, as audiences house-right have the westering sun in their eyes for half the performance.

King Lear was going to be the 2020 season’s tentpole production, with a star in the title role of Shakespeare’s most spirit-shaking play – the story of “a man more sinned against than sinning,” whose kingly pride and advancing age lead him to yield up first his kingdom, then his authority, and finally his reason. Now it leads this season, with the same star. 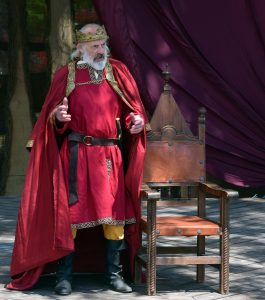 When Christopher Lloyd was first announced as Lear there was some wonderment, as he’s lodged in the popular memory as a comic oddball, thanks to his Doc Brown in the Back to the Future movies and Iggy Ignatowski in TV’s Taxi. That’s not the problem here – in fact, this plodding performance could have used a little of that antic edge.

Lloyd’s Lear is frail, slow of gait and speech, so halting in fact that I was in constant fear the actor as well as the king had lost his train of thought. The hesitant pauses between words – even in his angry rants and wild defiance of the wintry storm – felt like he was still thinking his way through the lines, or even trying to remember them.

The guy is 82, “fourscore and upward,” as Lear admits of himself, so the frailty is understandable; but the part requires so much more than querulous volatility. He must be not only “a very foolish fond old man” but “every inch a king.” Ironically, I believed Lloyd’s performance in only one scene, when Lear’s escalating madness finally achieves a kind of giddy innocence, a wide-eyed looniness that poignantly channels Doc and Iggy. 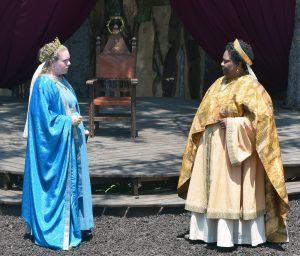 Two years ago on these grounds, MaConnia Chesser and Jennie M. Jadow were the two merry wives of Windsor, conniving to hoodwink the lustful Falstaff. Now they are Lear’s faithless daughters, conniving to destroy their father, then each other. Of the two, I found Chesser’s Goneril the more convincing – an imposing presence with a “try me” outlook and a voice that can shake the branches of the overarching trees. Jadow lacks the vocal power to match her scene mate, and I thought perhaps swapping roles would have improved the balance, since Regan is the more ferocious. 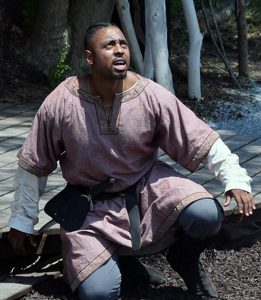 Another bit of miscasting comes in the second sibling pairing, noble Edgar and ignoble Edmund, the “legitimate” and the “bastard.” Bryce Michael Wood, seen here in 2019 in Topdog/Underdog, about another brace of brothers, is a cocky, jeering Edmund, as full of mischief as he is of himself; but Nomè SiDone’s Edgar lacks the dignity to be a credible antithesis, though when Edgar flees in disguise after Edmund’s false accusations, his violently crazed Poor Mad Tom act effectively embodies the man’s consuming anguish.

Lacking a reliable center, the production rests most of all on first-rate support from three S&Co stalwarts. Nigel Gore plays Lear’s friend the Duke of Gloucester with a sober dignity that makes it even more painful when his eyes are plucked out for fealty to the king. As Lear’s wise Fool, Allyn Burrows is a guitar-playing, Gandalf-pipe-smoking knave whose fount of caustic jokery is slowly stunned into silence by the monarch’s decline. 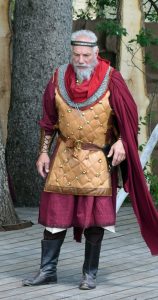 Jonathan Epstein, who played the title role here in 2003, is Kent, Lear’s honest plain-spoken lieutenant. By turns furious and sardonic in defiance of the king’s enemies, he’s the most watchable actor on the stage, a model of intelligent delivery and focused energy.

Most of the 11 cast members double in minor and supernumerary roles. I especially admired David Bertoldi’s quick-change act as the Duke of Albany, Goneril’s honorable husband, and her cowardly steward Oswald.

Shakespeare’s plays don’t need a “concept” to make them work (this one is traditionally costumed, by Govane Lohbauer) but they do need a unifying vision to unite the interweaving relationships and themes – this towering, tumbling masterwork more than most. Nicole Ricciardi, whose work I’ve admired over the years, makes some seemingly random choices and seems not to have a firm grip on the production, at the cost of overall coherence. 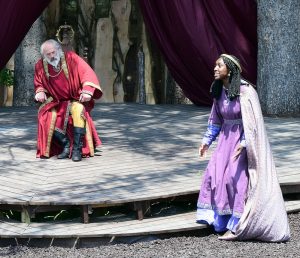 Two casualties of this lapse are S&Co veteran Ryan Winkles and newcomer Jasmine Cheri Rush. Winkles is the Duke of Cornwall, Regan’s sadistic husband whose thirst for power is quenched with blood; but here he’s a rather irresolute fellow until the moment he blinds Gloucester, and even then he needs a sexual charge to spur him on. As Cordelia, Lear’s faithful daughter, disowned for her honesty, Rush nicely conveys her simple candor but is simply shrill when it comes to leading the avenging army.

A few directorial innovations are interesting and apt (Albany catching sight of his wife kissing Edmund), some are puzzling (merciless Regan weeping at her father’s infirmity?). But too often there’s little sign of the director’s hand, which makes the central performance even weaker, without a solid scaffold to support it.

When Allyn Burrows is offstage he’s S&Co’s artistic director, and his welcome-back curtain speech before Saturday’s performance bubbled with excitement: “I can’t tell you how gratifying it is to see you again!” Perhaps it was a shared enthusiasm for the company’s – and our – return that prompted many in the audience to jump to their feet for the curtain call, after a three-hour marathon that brought Shakespeare back to Shakespeare & Company, but without doing him sufficient justice.