Stagestruck: The Weather, the Union, and Othello 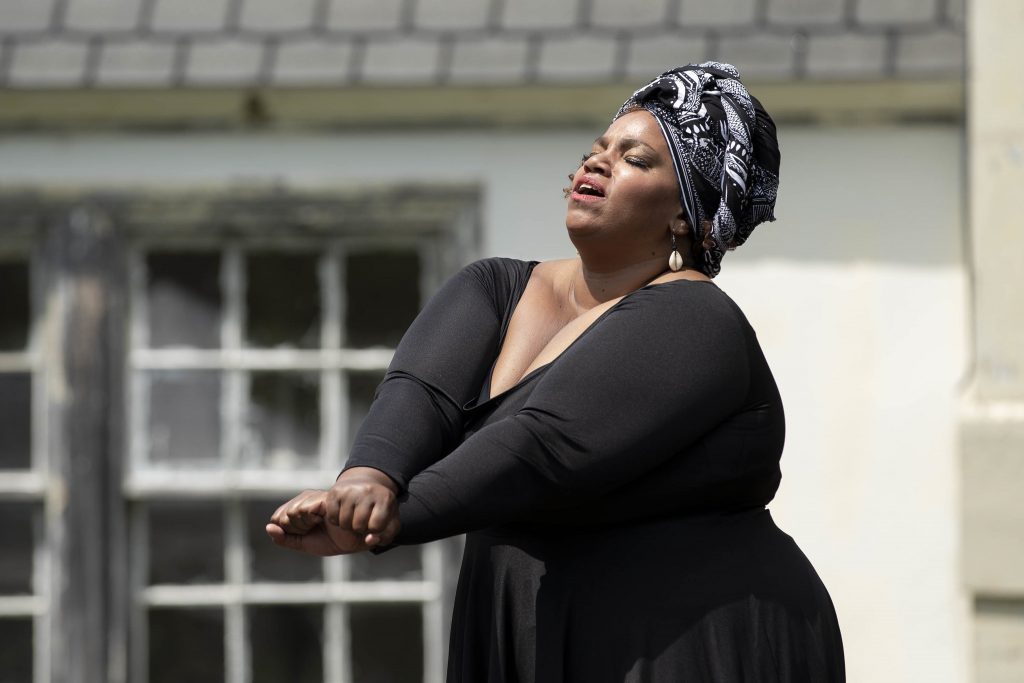 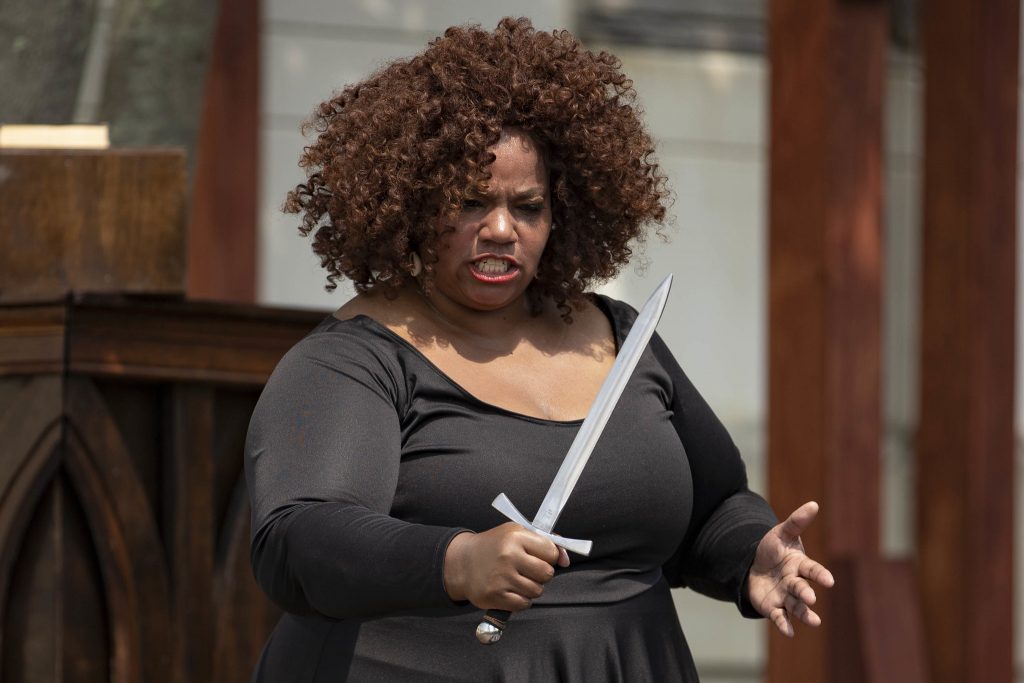 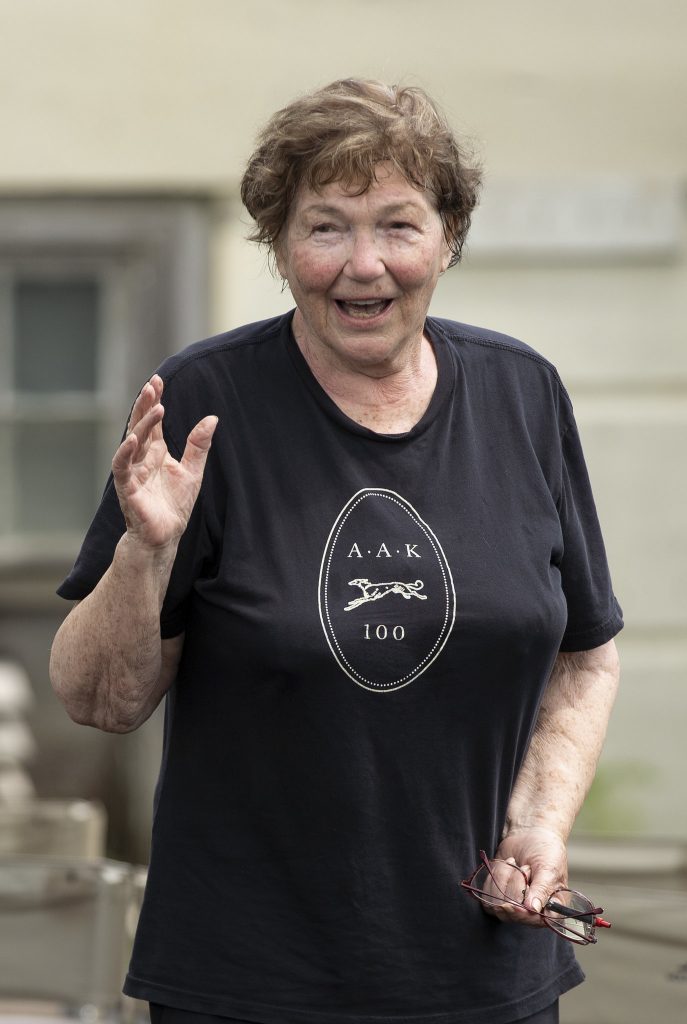 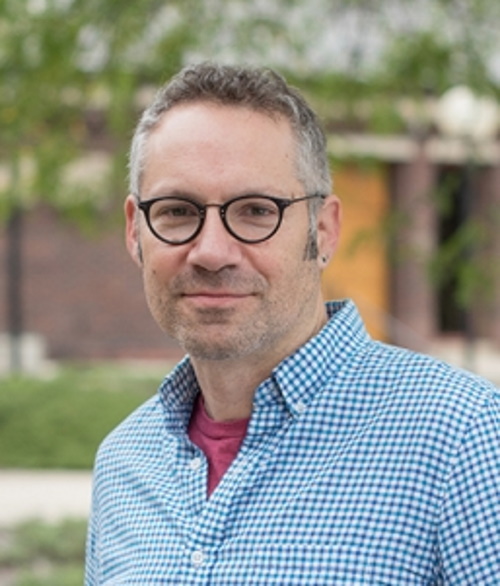 I had a theater-going “double feature” planned for last weekend – two outdoor shows in a row with adventurous Berkshire-based companies. But those plans were disturbed by two irresistible forces: Nature and Actors’ Equity Association.

At Shakespeare & Company in Lenox, Becoming Othello was suspended partway through because of excessive temperatures and moved indoors. Chester Theatre Company’s performance was cancelled outright by the threat of severe thunderstorms. Both emergencies were triggered, of course, by this summer’s record-setting proofs of climate change.

Becoming Othello details “a Black girl’s journey” from the streets to the stage, from Spanish Harlem to the Moor of Venice. It’s Debra Ann Byrd’s life story, a winding trajectory of abuse and ambition, dreams and disappointments, pursuing a surprising lodestar. In this one-woman memoir, the yearning to be “not just good, but excellent,” at first unfocused, grows into a fierce, specific determination: to play Othello. 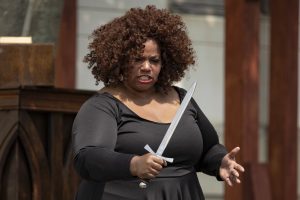 Byrd is a sensational performer with an extraordinary voice. Speaking and singing, she reaches thrilling highs and lows of volume and intensity, and puts her whole body into every moment. Her high-voltage performance was exhilarating and her energy level impressive, especially during a hot summer matinee.

With its personal reflections on Shakespearean themes, Becoming Othello put me in mind of two other solo shows. Both Stephan Wolfert’s Cry “Havoc!” which S&Co staged in 2016, and Keith Hamilton Cobb’s American Moor use the plays to “hold a mirror up to nature.” Cobb’s piece, set during an audition for Othello, revolves around questions of “who gets to make art, who gets to play Shakespeare,” which are also at the heart of Byrd’s journey.

Wolfert’s play, rising from his experiences as a combat soldier, weaves Shakespeare’s words into his narrative, and Byrd does the same. Gang “colors” in her New York neighborhood evoke the Wars of the Roses in Henry VI. Falling heart over heels for a boy in high school paraphrases Rosalind: “We no sooner met but we looked; no sooner looked but we loved.” Gang-raped, she channels the murdered Desdemona: “How does thou look now, oh ill-starred wench?” And when, in the depths of depression, she considers suicide, “To be or not to be” entwines with the gospel hymn “I’ll Fly Away.”

Her drive for “excellence,” she says, came to rest on Shakespeare through a series of chance encounters with the Bard. One of these was Women of Will, Tina Packer’s exploration of “the feminine in Shakespeare.” Packer, of course, is the co-founder and guiding spirit of Shakespeare & Company and, not incidentally, the director and champion of Byrd’s play. 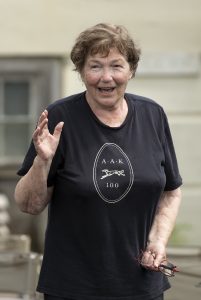 On Saturday, as we took our seats in the company’s sunny Roman Garden Theatre for the show’s final preview before its official opening, Packer advised us that if the day grew too hot we’d move indoors. And sure enough, an hour into the 100-minute piece, the performance was suspended and we streamed into the air-conditioned Tina Packer (yes) Playhouse.

“For this relief, much thanks,” as a character in Hamlet says, and it was a relief – not least, I’m sure, for the performer, whose all-black attire and vigorous performance certainly tested the limits of her stamina. The move inside allowed the show to go on, but disrupted its flow and diluted its power. The standing ovation at the end was genuine and well deserved, but I wondered why, with the challenges of this summer’s volatile weather, the show wasn’t simply performed indoors.

So, when I ran into Packer afterwards, I asked her. Her answer: Equity.

As theaters started reopening this year, the actors’ union imposed strict conditions for resuming performances, including testing regimens, masking requirements, capacity limits and social distancing, to protect its members. And as government mandates have relaxed and then lifted, Equity has repeatedly revised its policies. But in this brave new world, the shifts have often seemed contrary or confusing to those affected.

The reason the performance of Becoming Othello began outdoors and ended indoors, Packer told me, is that when the protocols for the production were agreed, early this year, it was presented to Equity as an outdoor production. That definition still applies, even though indoor full-capacity shows are now permitted under new agreements. The performance can be moved indoors in a heatwave or rainstorm, so long as it begins outside.

Chester Theatre Company is spending the summer at Hancock Shaker Village, performing under a big open-sided tent. Even though there’s protection from the rain, if there is lightning in the area the show must be halted and the audience brought to shelter till the coast is clear. That’s happened once during the run of The Niceties, Eleanor Burgess’s dissection of race, class, history and representation on a college campus. And last weekend two performances were cancelled before curtain time by approaching storms. 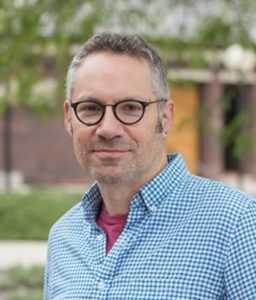 “Everything’s been a moving target this summer,” Chester’s Daniel Elihu Kramer told me later. “The Equity expectations and requirements have been shifting as we went,” and practice doesn’t automatically follow policy. “When Equity rules adjust, your behavior doesn’t automatically adjust, because you’ve signed a safety rider based on a certain set of rules. When the rules shift you need to apply for a new safety rider, get Equity approval, and then get the approval of the Equity members.” During the rehearsals and run of The Niceties, the rules have changed three times and three new riders have been issued.

“Like lots of people, there are certainly moments I’ve felt frustrated,” Kramer said. “But I get it. Equity has been in a really tough situation,” seeking to balance its members’ safety with audience’s (and actors’) eagerness for a return to the stage.

“I’ve tried to approach it with the idea that we’ve agreed on goals and we’re all just trying to figure out how to get there.” The union, he said, is not being “obstructive to be obstructive. It’s saying ‘This is scary, and how do we keep people safe?’ And honestly, things have moved more quickly than I would have guessed.

“But boy, I would have liked this summer not to have coincided with this weather. It’s a tough combo. And it has not increased my appetite for outdoor theater.”