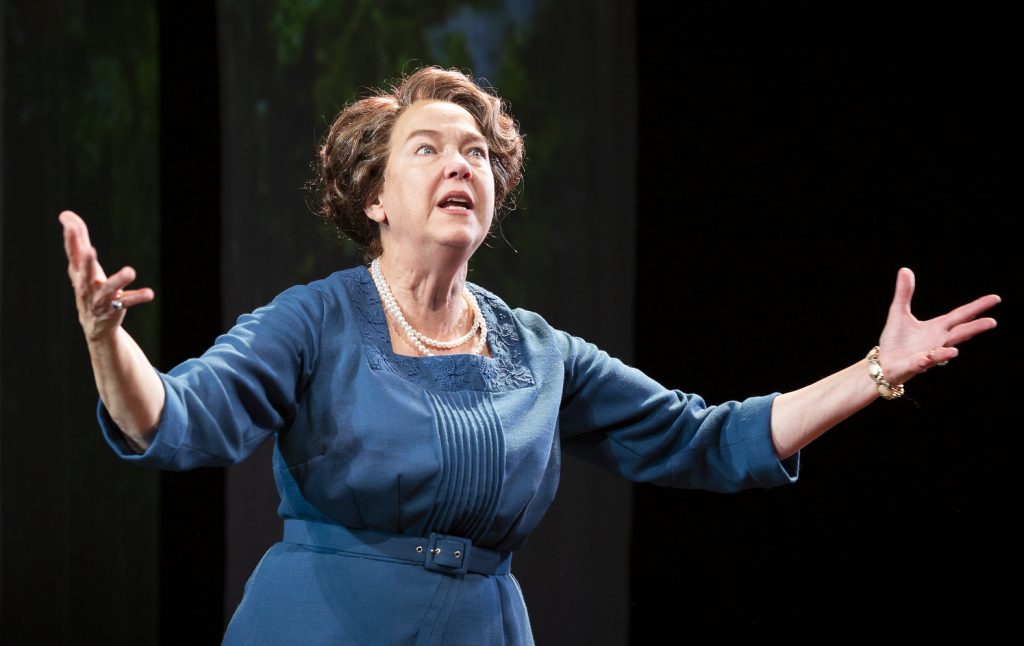 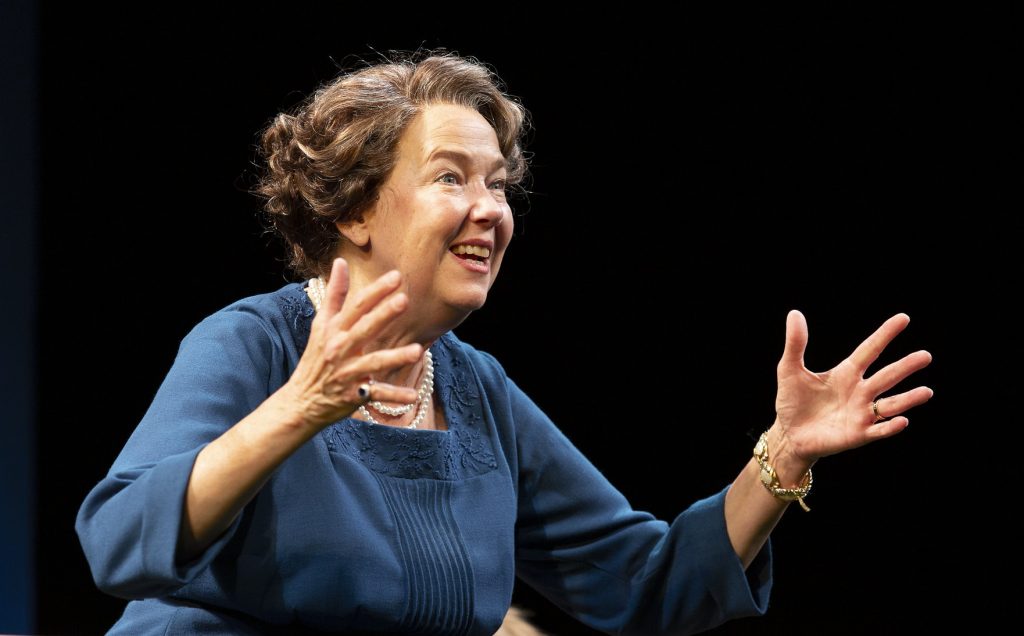 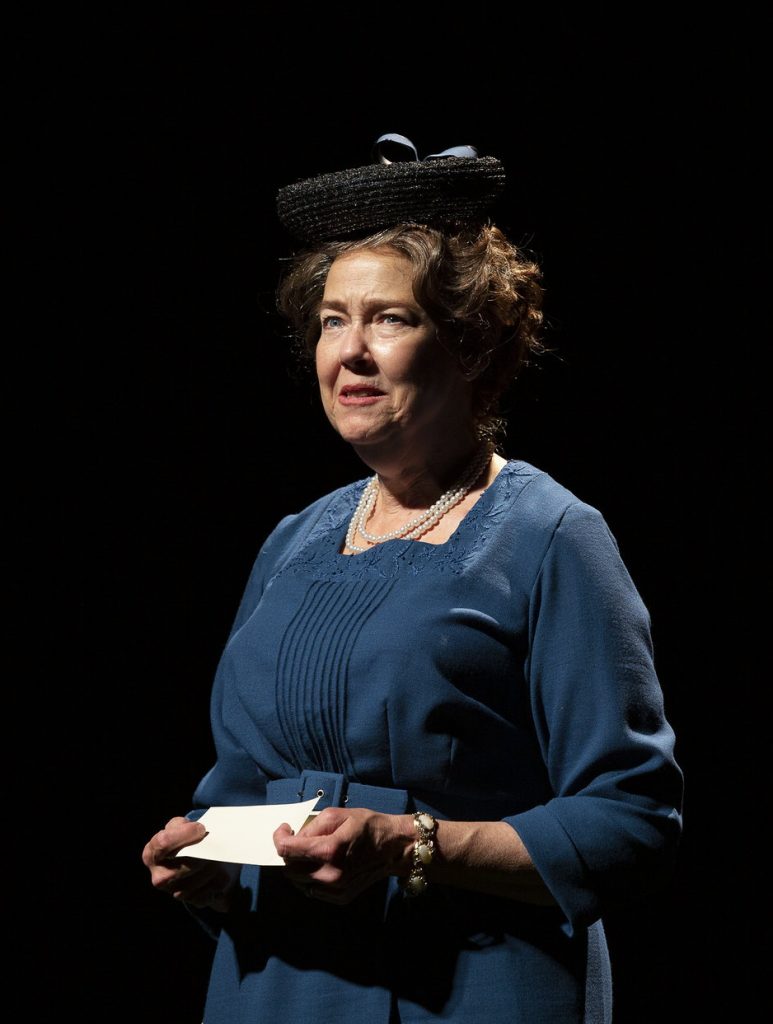 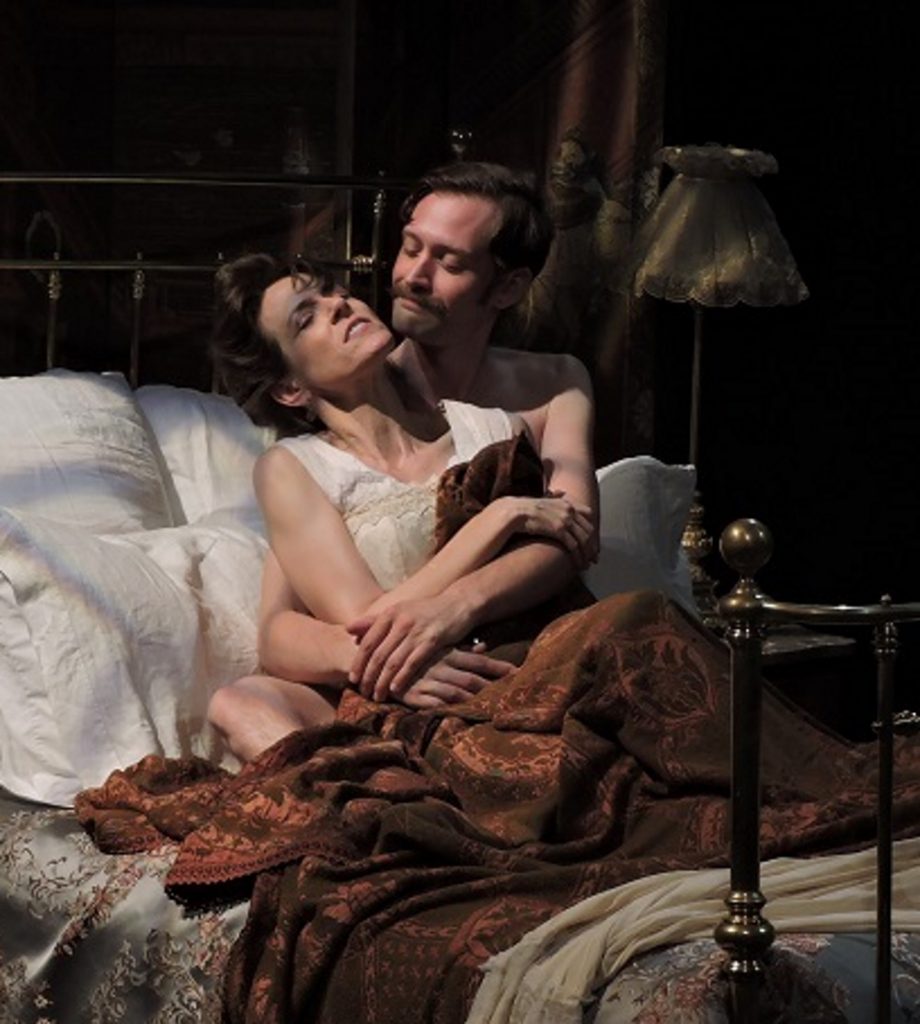 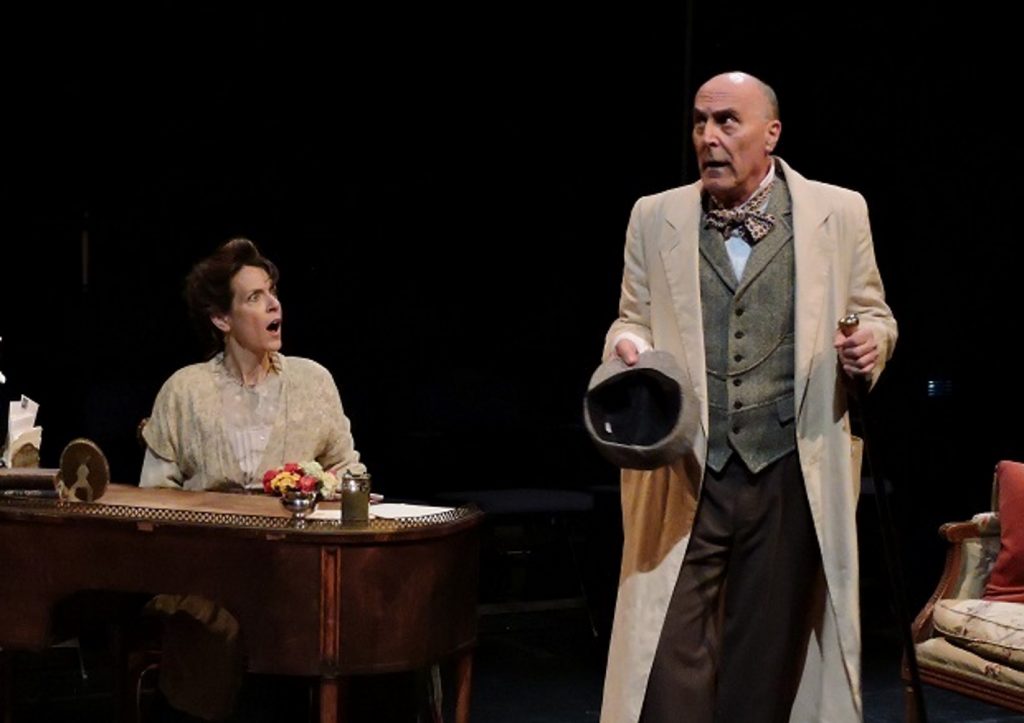 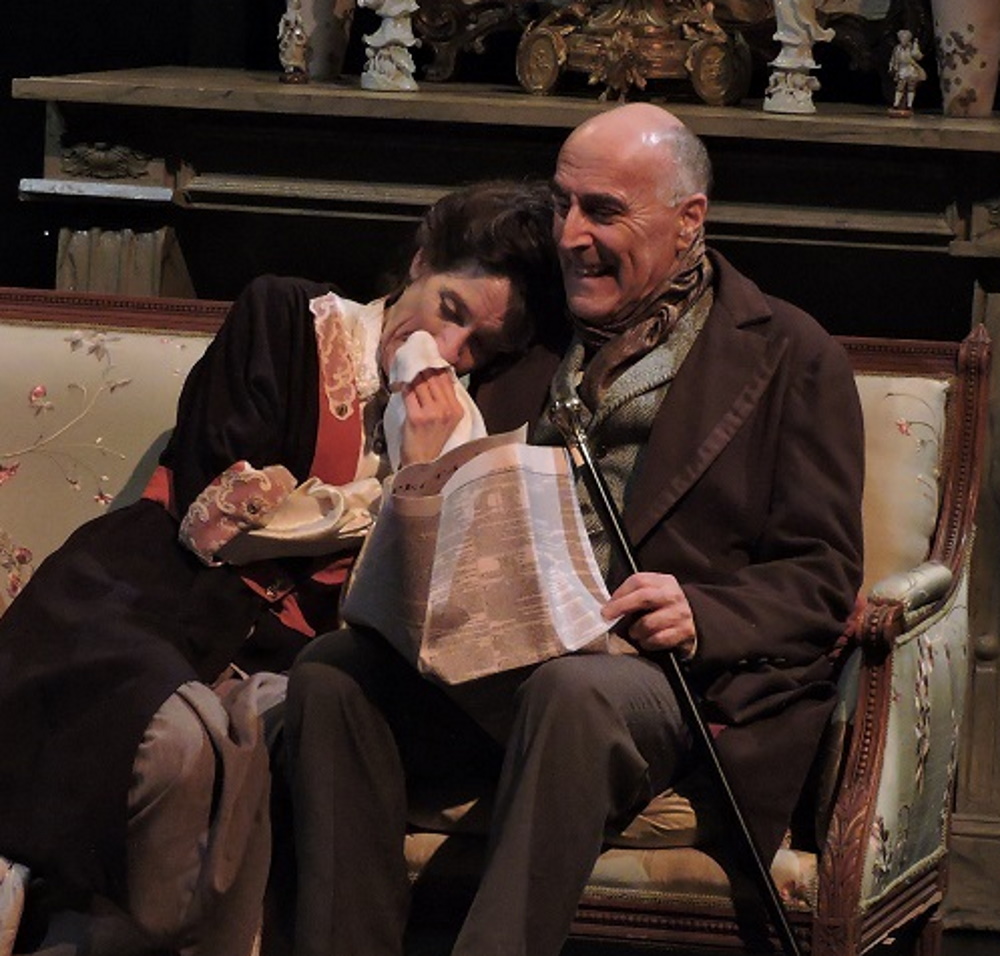 My partner is a literature professor, specializing in women writers. She has noted a principle in both scholarship and fiction that she calls the Noah’s Ark Approach: If you want to get attention for your female subject, pair her with a famous man (think Girl with a Pearl Earring or all those wives of Henry VIII).

Two new plays in Berkshire theaters illustrate that rule. The title character in Eleanor, at Barrington Stage Company, is Eleanor Roosevelt, FDR’s wife. And in a twist on the principle, the central figure in Mr. Fullerton, at Great Barrington Public Theater, is Edith Wharton, certainly a power in her own right; but the title is given to a man.

Eleanor is a memoir set in Washington’s Rock Creek Cemetery, where Mrs. Roosevelt, five decades dead, likes to spend some quiet moments of eternity. “Don’t look it as a graveyard,” she says, addressing us companionably. “Think of it as a park with permanent residents.”

She’s not buried here, but at the Roosevelt estate in Hyde Park. “My body lies beside Franklin’s, but not my spirit,” she explains. “For the forty years we were married we not only had separate bedrooms but separate lives.” 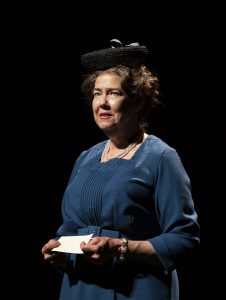 Mark St. Germain’s one-woman play details her separate life chronologically as she reminisces, seated on a bench below the St. Gaudens statue known as “Grief.” But that life, we are constantly reminded, was inextricably tied to her husband’s political career and repeatedly wounded by his persistent affair with her social secretary.

Eleanor shares with us her impulse to social activism – her early awakening to the plight of sweatshop workers; her defiance of the Daughters of the American Revolution by inviting the Black soprano Marian Anderson to perform at the Lincoln Memorial; her (unsuccessful) lobbying of FDR on behalf of Jewish refugees and interned Japanese Americans in World War II.

She also shares two secret love affairs she had during her marriage, one with her bodyguard, the other with the female reporter assigned to cover her. Historians debate whether these were more than close friendships, but St. Germain’s Eleanor leaves us in no doubt, quoting gleefully from the purple prose of private letters.

But she returns again and again to the two most important men in her life: her father, whom she worshipped beyond reason, and her husband, whose position and power made her own possible but who, in this telling, needed her far less than she needed him.

In this, you can see the Noah’s Ark influence. It’s evident in the play’s hurried conclusion after FDR dies. Eleanor Roosevelt was arguably our most influential First Lady, and certainly the most active and effective former First Lady. But once her husband is offstage, so to speak, there’s a perfunctory listing of some of her later accomplishments – first woman delegate to the fledgling United Nations, co-author of the Universal Declaration of Human Rights, advisor to JFK’s Peace Corps initiative, first white honorary member of the Black sorority Alpha Kappa Alpha – and then a dependent ending. As she moves off to rejoin her husband in Hyde Park, she recalls a childhood teacher’s definition of “a true marriage: a partnership where two people do great things together they could never do alone.” 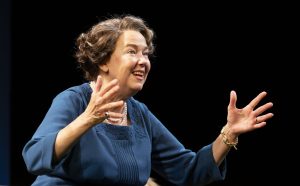 Eleanor is an interesting and entertaining confessional biography, and it’s made more than that by Harriet Harris’s spellbinding performance and Henry Stram’s sensitive direction. Harris is known to the nation as Frasier’s diabolical agent in the classic TV series, but I know (and adore) her primarily through her performances over the years on Berkshire stages where, as often as not, she has rescued less-than-stellar productions with her incandescent presence and impish, ironic sense of humor.

Here she has the stage to herself, and holds it sublimely for every minute of the show’s hour and a half. Sailing along on a patrician drawl, she embodies every moment, living for us every trial and triumph, and stepping deftly into witty impersonations of the people in Eleanor’s life, from her gorgonesque mother-in-law to her bullish Uncle Teddy (Roosevelt) to a shameless, hard-drinking Winston Churchill.

Eleanor, in Harris’s hands, is more than an intimate visit with the First Lady of the World, as Harry Truman dubbed her. It’s an intimate encounter with a great lady of the theater.

Edith Wharton was a near-contemporary of Eleanor Roosevelt – 20 years her senior, she published her best-selling novel The House of Mirth in the year Eleanor and FDR were married, 1905. Their families moved in the same Gilded Age social circles, and they shared at least one close connection: Eleanor’s Uncle Teddy was a friend of Edith’s, and in Ann Undeland’s new play she speculates that they too might be related.

Mr. Fullerton is the imagined account of a little-known sidelight from Wharton’s life. It follows on from Undeland’s previous work, Lady Randy, about Winston Churchill’s mother, which she has said she wrote because she wanted a woman lead, but recognized that “if I wanted name recognition, I had to find a woman who was associated with a famous man.” Here the famous figure is a woman, but the play turns entirely on her relationship with a man. 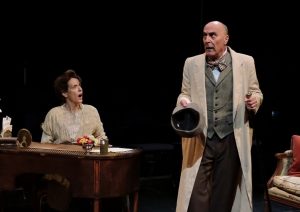 It takes place between 1906 and 1911, when Wharton was spending much of her time in Europe, leaving her acutely depressive husband at their Lenox estate, The Mount. During these sojourns, she conducted a not-quite-secret affair with the American journalist and bon vivant Morton Fullerton, to whom she was introduced by her good friend Henry James.

The play is set in the Parisian flat Edith has rented from the Vanderbilts, and in a series of plush hotel rooms where the lovers tryst. The two locales occupy opposite ends of Patrick Brennan’s set, running between two banks of audience – a prim settee and writing desk at one end, a big brass bedstead at the other.

Wharton famously wrote her novels while reclining in bed. Here the bed serves quite a different purpose, and a series of ­­­­fairly steamy scenes amid rumpled linens relate her sexual awakening, at first skittish but soon voracious. 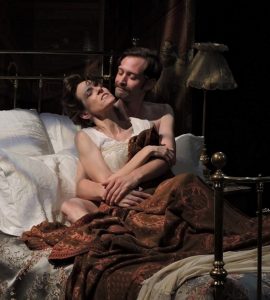 The emotional arc of the affair is reflected in Judy Braha’s crisply paced production. The early scenes are pure romcom, complete with a meet-cute, played at a heightened comic pitch. But after the first fine madness is spent, the com drops out of the rom, heartthrob turns to heartache and the tone of the piece shifts to anguish and then melancholy.

Dana M. Harrison and Marcus Kearns are both Shakespeare & Company veterans, appearing here in the Public Theater’s second season at Simon’s Rock in Great Barrington, where I saw the play in previews.

Harrison delightfully shows a fluttery, girlish side of Edith as she’s swept off her feet (literally) by romance. This is the private Edith, not the grand lady of society and letters known as “the female Henry James,” and we watch her crumple as the affair crumbles. As Fullerton, Kearns is charm itself, dashingly mustached, socially adept and sexually adroit, an addictive but fickle lover. 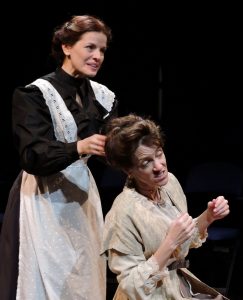 Two supporting, and supportive, characters provide context and contrast. Glenn Barrett’s Henry James is buttoned-up and cranky, annoyed equally by Edith’s yapping dogs and her superior sales figures. Posy, Edith’s longtime lady’s maid, in a smart performance by Valley-based Myka Plunkett, is an Irish lass from Hell’s Kitchen. She’s a loyal if skeptical servant, and a fan – she gathers her mistress’s handwritten drafts and reads them avidly – and has a backstory that seeps into Ethan Frome.

Noah, I suppose, would be turning over in his ark to see his divine rescue mission turned into a metaphor for female representation. But the two-by-two approach is an apparently successful tactic, and as long as women are inequitably represented in the theater, both onstage and off, it’s also apparently necessary.