Stagestruck: The ‘Art’ of Friendship 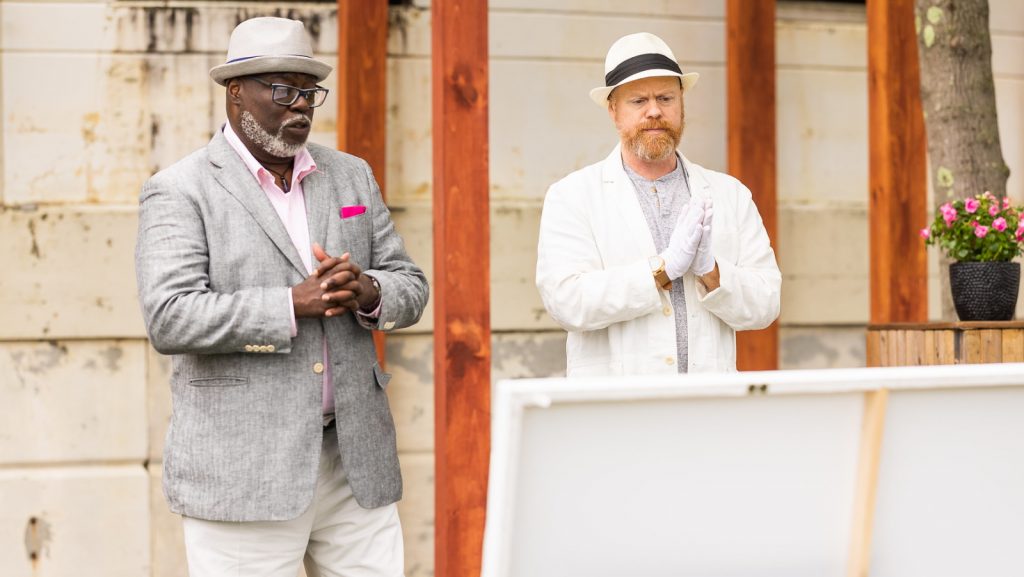 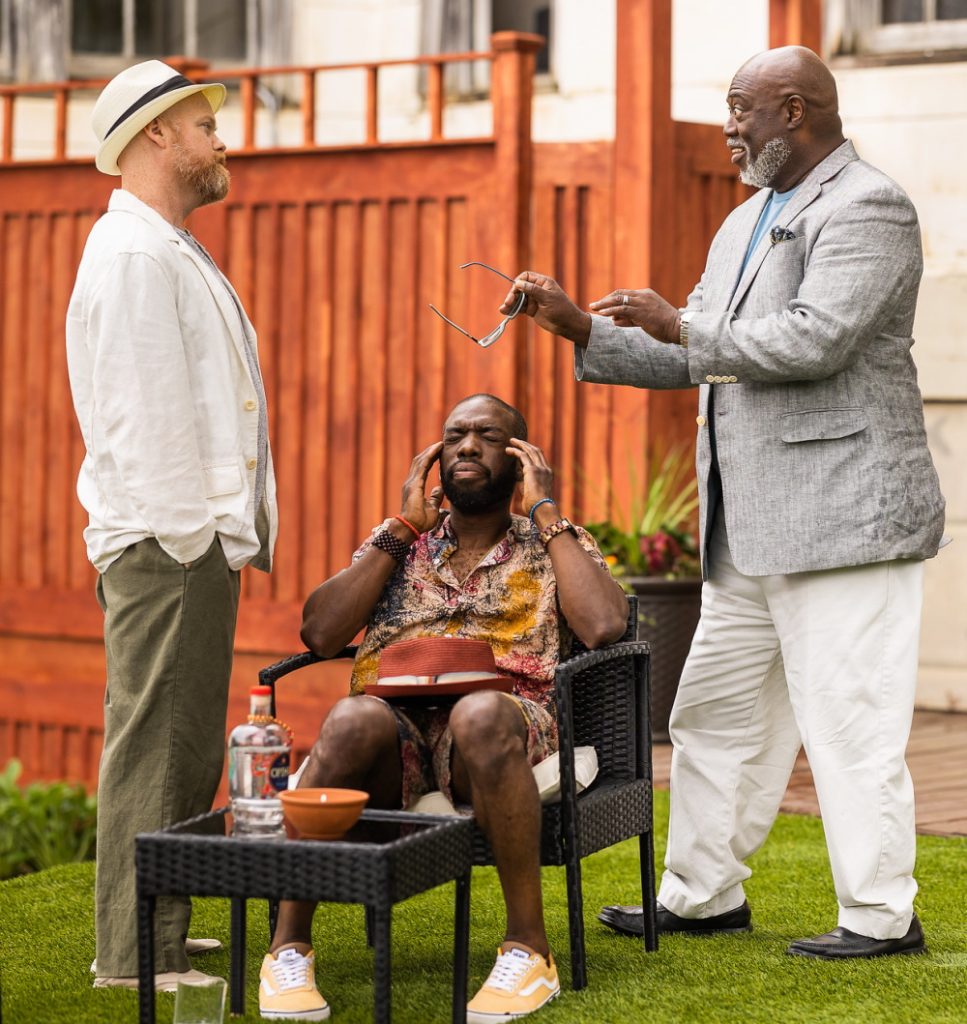 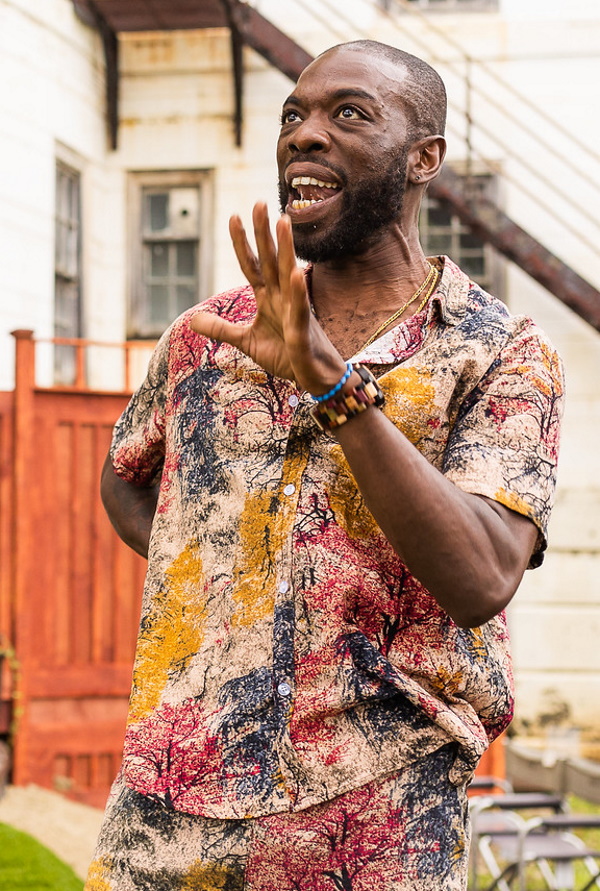 Serge has just purchased an ultra-abstract painting for an outrageous sum and is excited to show it off to his good friend Marc – who looks it over and offers his assessment: “You paid two hundred grand for this shit?”

You see, it’s a large white canvas – all white, with perhaps some streaks of almost-off-white visible if you squint.

Their friend Yvan, primed by Marc to disdain the painting, instead amiably agrees that the piece is “something special” and the price “reasonable.” Of course he’s lying, because just as Marc speaks his mind too freely, Yvan rarely speaks his mind at all.

Art, which runs at Shakespeare & Company through August 22nd, is the third work by the French playwright Yazmina Reza the theater has produced. They’ve also staged her vicious black comedy God of Carnage and the quietly charming two-hander The Unexpected Man. Her recurring theme is the thin veneer of civilized comportment that keeps us from taking up cudgels. Art is part comedy of (bad) manners and part forensic examination of the power and fragility of friendship, and the cudgels are raised over the value of a piece of “art.” (The playwright placed quotation marks around her title, an ironic comment on the topic that begins the argument: What is art?)

Reza’s play takes place in the three men’s Paris apartments. Since this production is being performed outdoors, in S&Co’s Roman Garden Theatre, Edwards has set it in the garden of Serge’s country house – in the Berkshires. (Patrick Brennan’s spare set features a Kelly green lawn and a suggestion of arbors.) There’s a reference to Mass MoCA, but also to Lyonnaise cuisine. 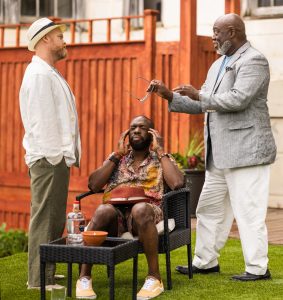 I’ve seen Art several times over the years, and what always strikes me is that it’s a play about men acting like women. By that I don’t mean drag. Here are three straight men, best friends whose 15-year bond is suddenly thrust into an existential crisis by Serge’s rash acquisition, which stirs up hidden resentments, even hostilities. And they battle it out by talking about … their feelings.

And therein lies the crux of the play – and the problem with this production.

Art is not really about art. It’s about the art of friendship, the depths and shoals that have to be navigated – the feelings that need to be tended. In other words, the kind of thing women are usually good at and men are famously not.

These guys are urban sophisticates, lovers of smart conversation and fine dining. Serge and Marc are successful professionals – a doctor and an engineer, respectively. Yvan is younger and callower, working in his fiancée’s uncle’s business and squeezed between family demands over his impending wedding.

Here the dialogue is not that of the locker room or even the boardroom. On the contrary. “Describe your feelings,” Marc urges Yvan. He’s “hurt” by Serge’s behavior. Yvan questions whether he’s truly “happy.”

The director, Christopher V. Edwards, doesn’t seem to have noticed this core ingredient. The three people I attended with, all of them new to the play, came away disappointed, with the impression that it was about “a bunch of guys arguing” and gave me funny looks when I told them what I think the play is about. “To me,” said one of them, “it was about men acting like men.” 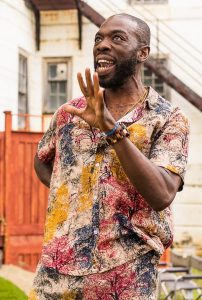 The disconnect between the play and the production is most telling in Lawrence L. James’s performance as Yvan. The character is repeatedly described as self-effacing, even meek – Marc calls him “obsequious,” “an amoeba” – and he admits, “I cry all the time.” But James plays him as the most outgoing, happy-go-lucky fellow in the trio. And costumer Stella Giulietta Schwartz has dressed him in a shirt-and-shorts outfit printed with a Jackson Pollock spatter painting – perhaps another comment on contemporary art, but hardly the wardrobe of an amoeba. So when Yvan finally does assert himself, the moment is lost because he’s already been there. James is an appealing actor who’s fun to watch. He’s just in the wrong play.

Marc is played by another likeable performer, who goes by the name “ranney” (in quotes) and also, in other venues, as Mr. FunnyBlackMan. His is a high-energy, high-decibel turn that milks the comedy and blunts the details, like Marc’s hypochondria. It works better than James’s performance, since Marc is confident and gregarious, but it tilts the production even further toward the locker room.

While James and “ranney” are new to S&Co, Michael F. Toomey is an established company member. Alone of the three – and the director – he seems to have a more nuanced grasp of the play. His Serge is proud and defensive, and you sense his feelings of personal and aesthetic betrayal are real. Trouble is, I found it hard to see why he’s such good friends with the other two.

Toomey is white, “ranney” and James are Black, as is Edwards. In a recent interview, the director said he made a conscious casting decision. “There’s no reason we can’t see a Black man who is an engineer, and he is friends with a white man, and they have an argument, and it has nothing to do with race,” he said.

Shakespeare & Company were pioneers of “color-blind” casting in this region, and at first I couldn’t tell if that was the case here, inviting us to “see beyond” the color – until Yvan, quoting his nagging mother, gave her a Caribbean accent. That’s all to the good, in an age when, as Edwards says, “Quite often, when we do see a person of color, they are the focal point of some trauma.”

I just wish he had grasped the focal point of this play.