Stagestruck: Postcards from the Cape, #1 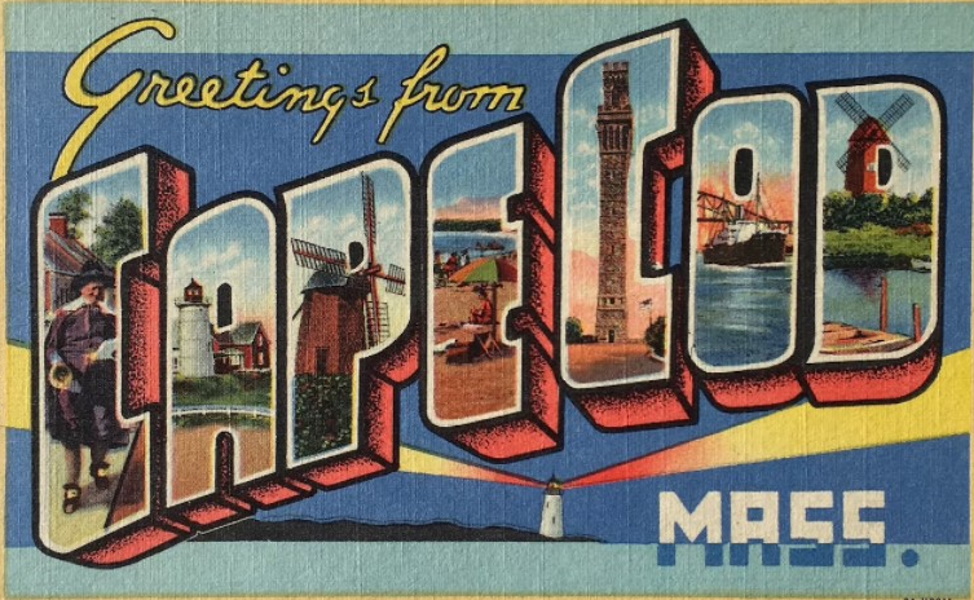 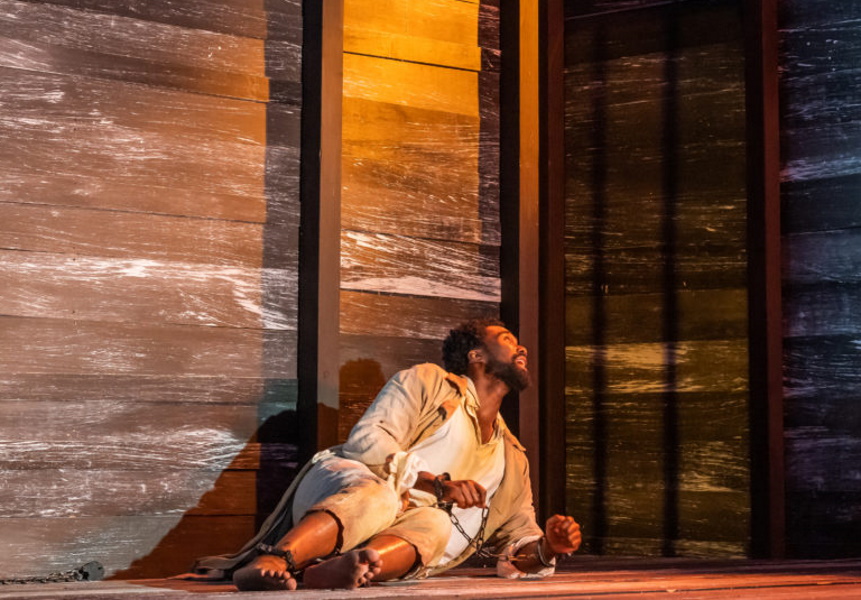 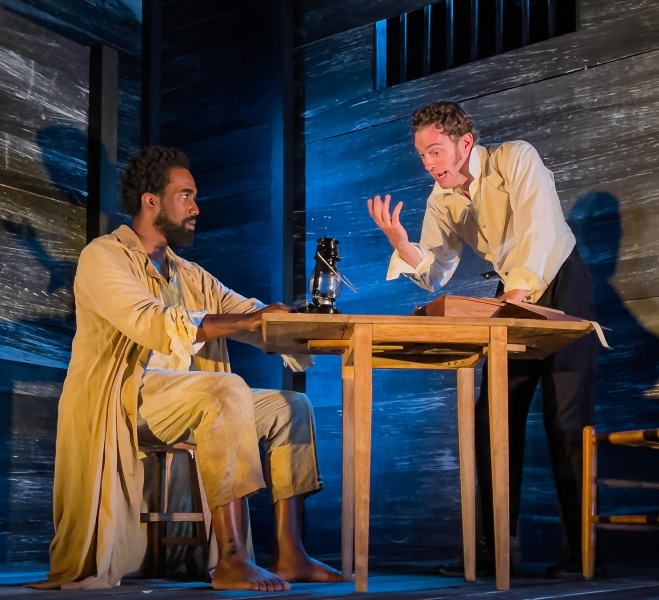 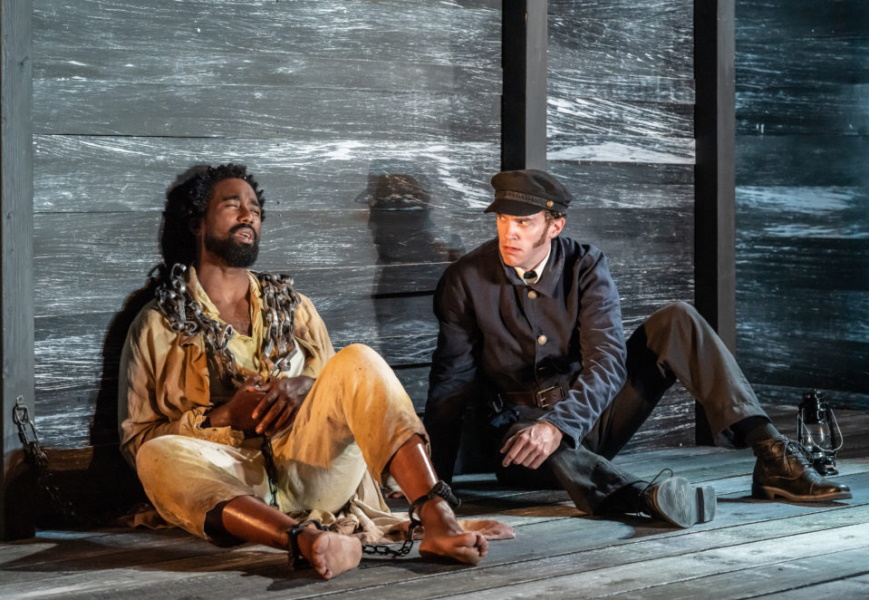 Every summer I spend a week on Cape Cod, enjoying the beach and, of course, the theater. This year I saw four shows at three Outer Cape theaters, two of which I haven’t visited in a while. The Provincetown Theater is reviving a classic that was written there; in Wellfleet, Harbor Stage Company is now performing the second of its season’s two world premieres and WHAT, the Wellfleet Harbor Actors Theater, is presenting a particularly pertinent slice of American history.

Here’s the first of three snapshots from those seaside shows, Nat Turner in Jerusalem at WHAT.

In August 1831, the enslaved Black man called Nat Turner, claiming divine inspiration, led a violent rebellion against slaveholders, and white society at large, in southern Virginia. (This weekend marks the 190th anniversary of the uprising.) The revolt was ferocious and indiscriminate, killing some 60 white people of all ages before it was crushed. Reprisal by citizens and militias was just as indiscriminate and took far more Black victims, many of whom had nothing to do with the insurrection. Nat himself was captured some weeks later, imprisoned and hanged.

A published version of his confession, recorded (and probably embellished) by lawyer Thomas Gray, was widely disseminated, providing both sides of the abolition argument with polemical fodder. On one side, the narrative by this literate preacher gave a human face and gripping detail to the horrors of slavery. On the other, the account inspired new, repressive laws aimed at free Blacks as well as the enslaved. 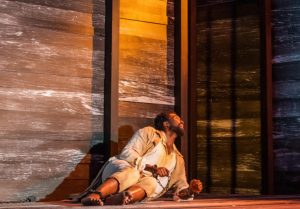 As we take our scattered seats before WHAT’s summer stage, in the corner of its parking lot, adjusting our mandatory masks, we discover Nat, shackled wrist and ankle to the wall of his cell. Soon, as sunset filters through the high barred window, we hear the chant of a crowd outside: “Kill him!”

Enter Thomas Gray, intent on supplementing Nat’s previous testimony with information on his accomplices, in order to both head off the possibility of a wider rebellion and to sell more copies of the book. He’s horrified at the bloody trail left by the uprising – including the killing of infants – but more concerned with his expected royalties. 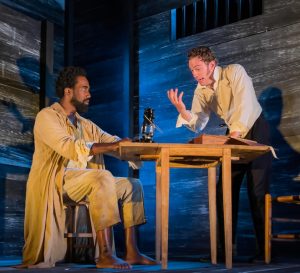 Nat himself, in this telling, sees himself as a Jesus-like figure. Clad in a long robe, he speaks of spending a month “in the wilderness,” fasting and praying, before entering into Jerusalem – Jerusalem, Virginia, that is, where he will be hanged tomorrow morning. He was instructed to kill “all my masters,” he says. “The voice that spoke to Moses spoke to me.”

He compares the cruelty of his assault on whites with the unending brutality visited upon his own people, and says the slaughter of (white) innocents saved them from growing up in the evil world they would inherit.

Ricardy Fabre is Nat, unrepentant, proud in defiance but humble in his sense that he’s the instrument of a higher power. When he finally stands up, shaking his chains, he’s majestic, prophetlike, startling us as well as the lawyer. 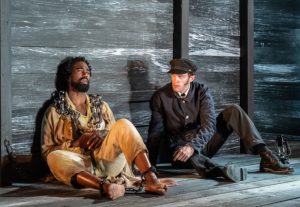 Robert St. Laurence plays both Thomas Gray and the unnamed jailer, a simpler, kinder soul who’s “just following orders” but brings Nat half a loaf of bread and feels a reluctant kinship with him, a fellow prisoner of an unequal system. The playwright specifies that both parts be played by the same actor, and these two white men of contrasting temperaments nonetheless parallel each other, sharing a revulsion at Nat’s murderous acts and a certain sympathy with his grievances.

St. Laurence gives the men markedly different voices and bodies, the lawyer tense, upright and well-spoken, the jailer hunched and unhurried, with a swaying limp and a country accent.

While the play sometimes has the feel of a moral argument more than a dramatic confrontation, the dialogue is never forced, the relationships complex, the performances continuously affecting. And the echo of enslaved voices finally rising up reverberates down to today.

At the end of the performance something happened that I haven’t encountered in years. Or rather, didn’t happen. Where usually the clapping begins the moment the lights go down, here there was no applause, just a silence that spoke more loudly than an ovation.