Stagestruck: Postcards from the Cape, #3 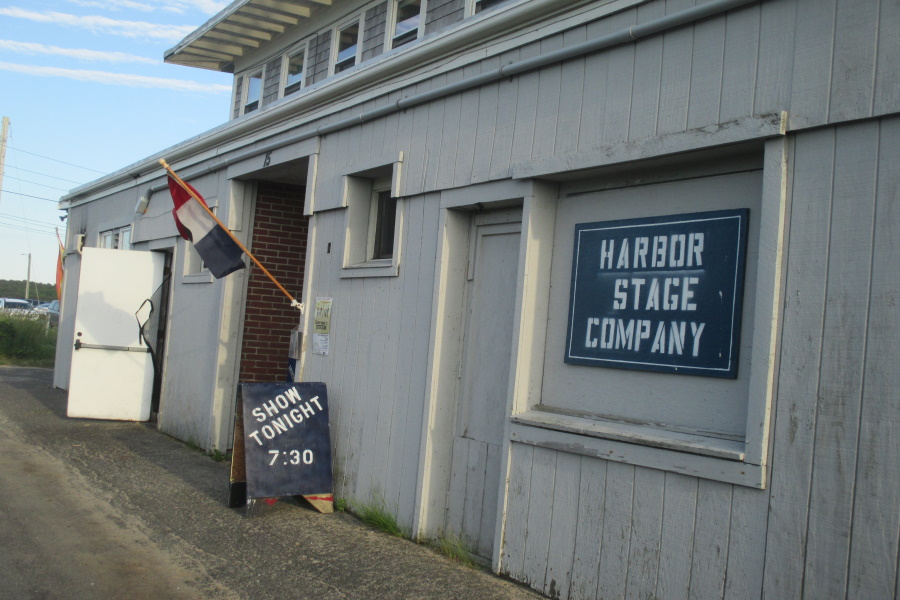 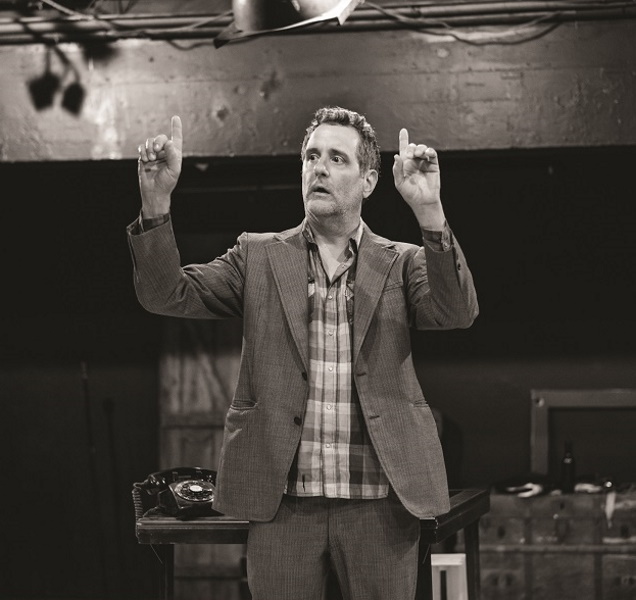 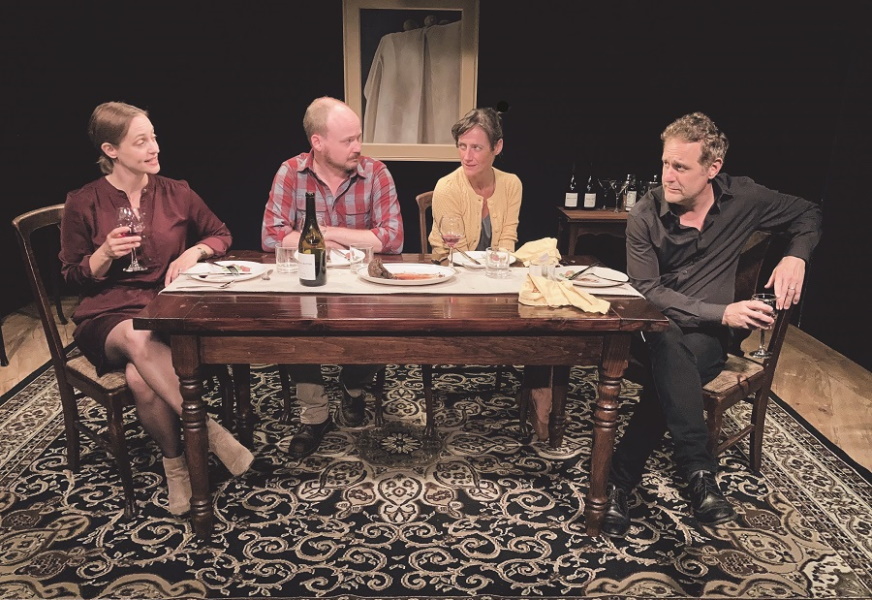 Every year, in my annual pilgrimage to Cape Cod, I make sure to catch whatever is playing at Harbor Stage Company in Wellfleet, which describes itself as “a theater by the sea that’s right on the edge” and lives up to that billing. This year’s reduced schedule consists of a brief one-man show and a bruising four-hander performed by the superlative ensemble who founded and anchor the company: Jonathan Fielding, Stacy Fischer, Robert Kropf and Brenda Withers, who is also an always-stimulating playwright.

Like so many summer theaters fighting to stay afloat in these perilous times, Harbor Stage’s reopening was an act of faith and courage – perhaps even more so, since they, unlike the two other Cape theaters I’ve covered this year (reviews here), decided to perform indoors.

“We looked for outdoor spaces,” Withers told the Provincetown Independent last month. “But the kind of plays we do just aren’t outdoor plays. They’re not ‘big’ theatrically.”

The troupe, an offshoot of the Wellfleet Harbor Actors Theater, performs in the 88-seat bayside space where WHAT got its start. This season capacity is reduced by 25 percent and masks are mandatory.

“We’ve grown together,” Withers said, praising the community’s support and loyalty. “We take a step; the audience takes a step with us.” 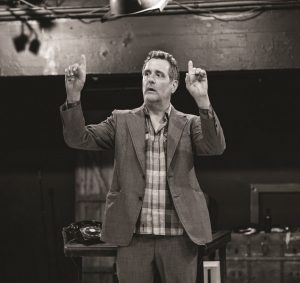 Which seemed to be the premise of the season’s first show, Stand Up If You’re Here Tonight, by frequent collaborator John Kolvenbach. Performed by Kropf, it was an experiment in audience participation. It began with an invitation to, yes, “Stand up if you’re here tonight,” a gesture that carried a feeling of togetherness after such a long separation. Then, as we followed more do-this instructions, the unnamed “Man” grew progressively manic and increasingly distracted from his all-together-now focus by personal concerns.

Finally, as an audience member, called unwillingly onstage, was soon revealed to be another actor, the pretense of connection with the audience was entirely abandoned. My partner was disappointed by this turn. The play was “breaking the contract with us” after we’d gone along with all the stand-up/sit-downs and other involvement. For me the piece appeared to be a clever and somewhat cynical reflection on our ultimate aloneness – a condition we’ve had to come to terms with over this past terrible year and will never really escape.

The Harbor Stage ensemble is like a superlative string quartet – four virtuoso soloists in tune with each other’s rhythms and dynamics while anticipating their cues. The current show, Dindin (through Sept. 5) was written by Withers for the ensemble. Apart from its own delights and intrigues, it’s a masterly showcase of this foursome in full flight. 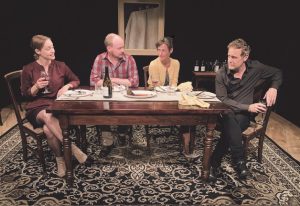 As the name implies, Dindin takes place around a posh dining room table in the course of a dinner party that starts with edgy banter and slowly devolves into rage and recrimination. In other words, a domestic pillow fight on the order of God of Carnage, except that this one has a mystery up its sleeve, along with a couple of surprises and a steady supply of laughs.

Emily and Pierre have invited Darlene and Ricky to dinner. She’s an artist friend of Emily’s, he’s the local craftsman who built the table they’re gathered around. The party is a “setup” to get them together romantically – except that early on there’s a brief hint that something is going on between Darlene and Pierre.

Fischer’s Emily is the kind of hostess whose eagerness for everyone to have a good time makes everyone nervous, and Kropf’s Pierre is the kind of host who couldn’t give a shit. Withers’ Darlene and Fielding’s Ricky are a couple clearly not made for each other, she artsy, sensitive and articulate, he matter-of-fact, indifferent and plain-spoken to the point of rudeness.

As things around the table get wine-soaked and testy, Emily flees to the kitchen, and doesn’t come back. Her disappearance, and Pierre’s suspicious excuses, form the spine of the play, and the resolution of that mystery propels the plot into even higher stakes.

While the play itself is absorbing, for me, simply watching the work of these consummate pros was reward enough. Further evidence of the quartet’s fine-tuned instincts lies in the fact that the production had no director and, on the evidence, needed no external guidance.

Dindin was scheduled for last season, the season that wasn’t, but the troupe gave a Zoom reading of it last November. In the hiatus, they’ve made a movie version, directed by Brendan Hughes, who gets a “directing consultant” credit for this staging. The film is now in post-production.