Stagestruck: Curtains Going Up, Rains Coming Down – Theaters reopen as summer dries off 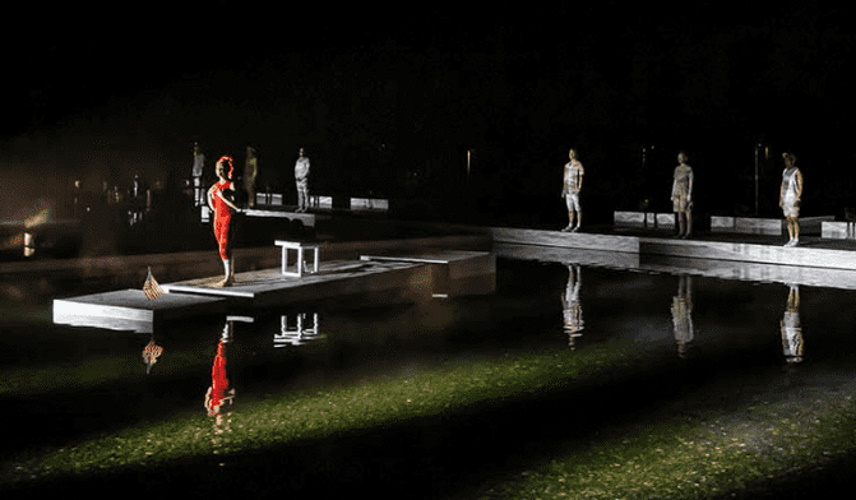 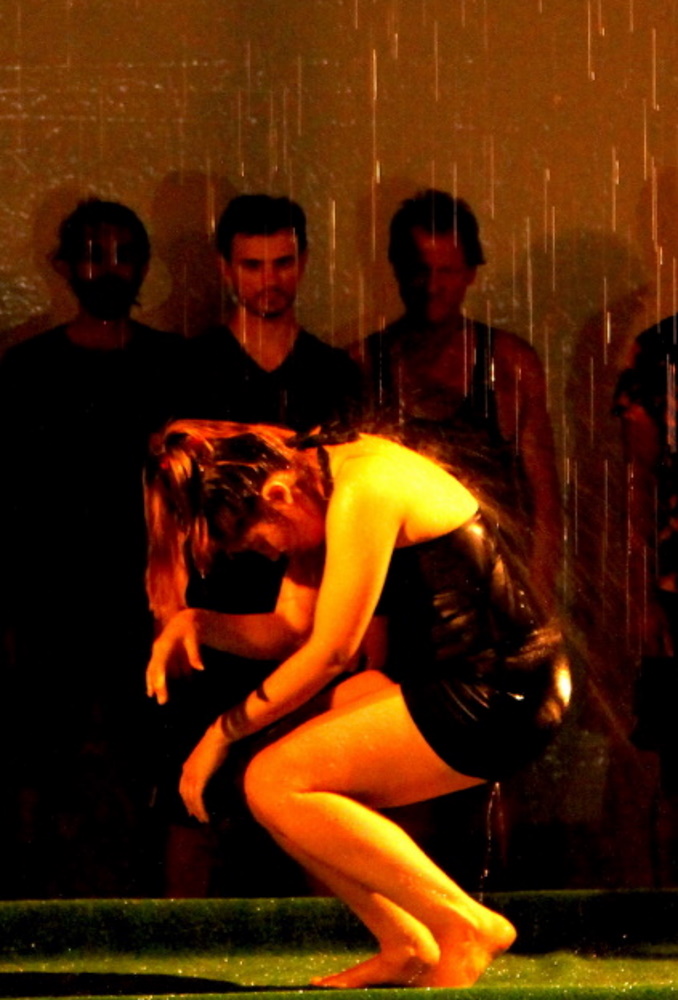 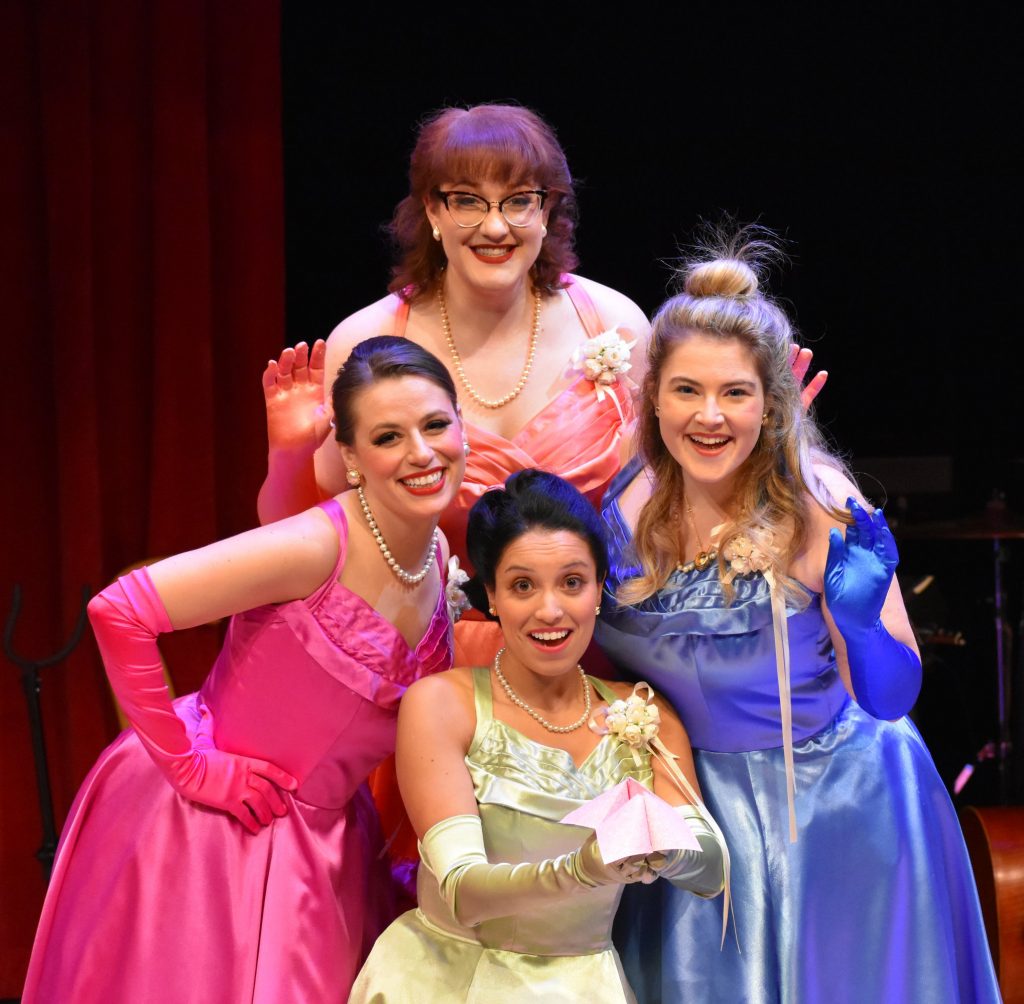 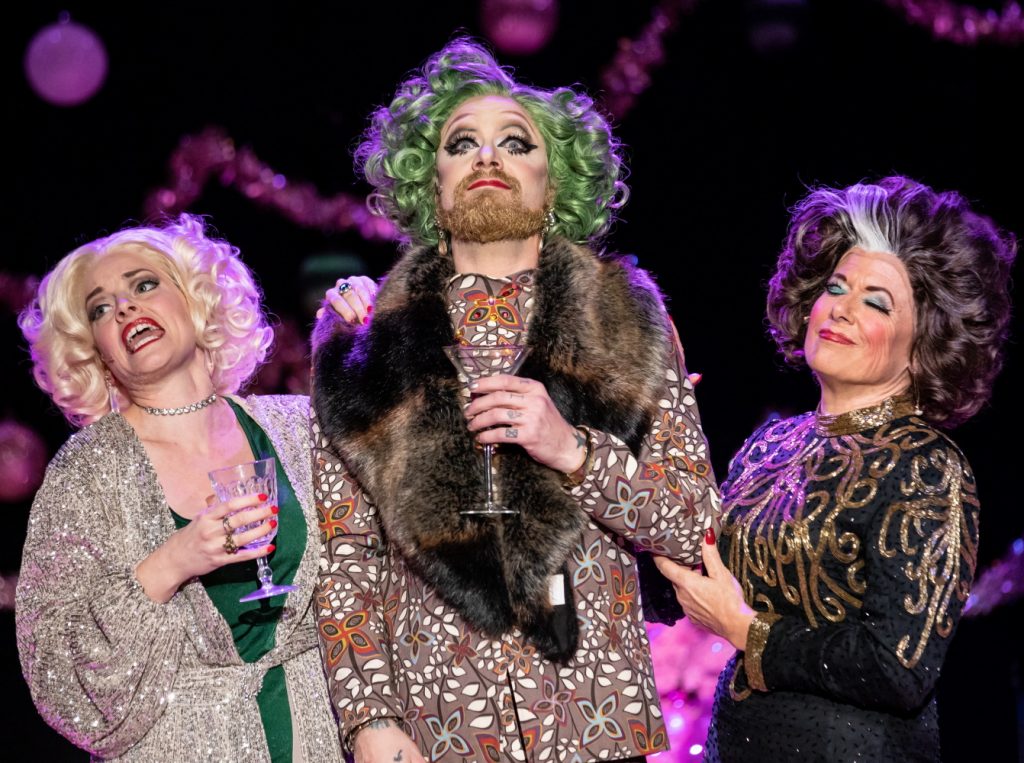 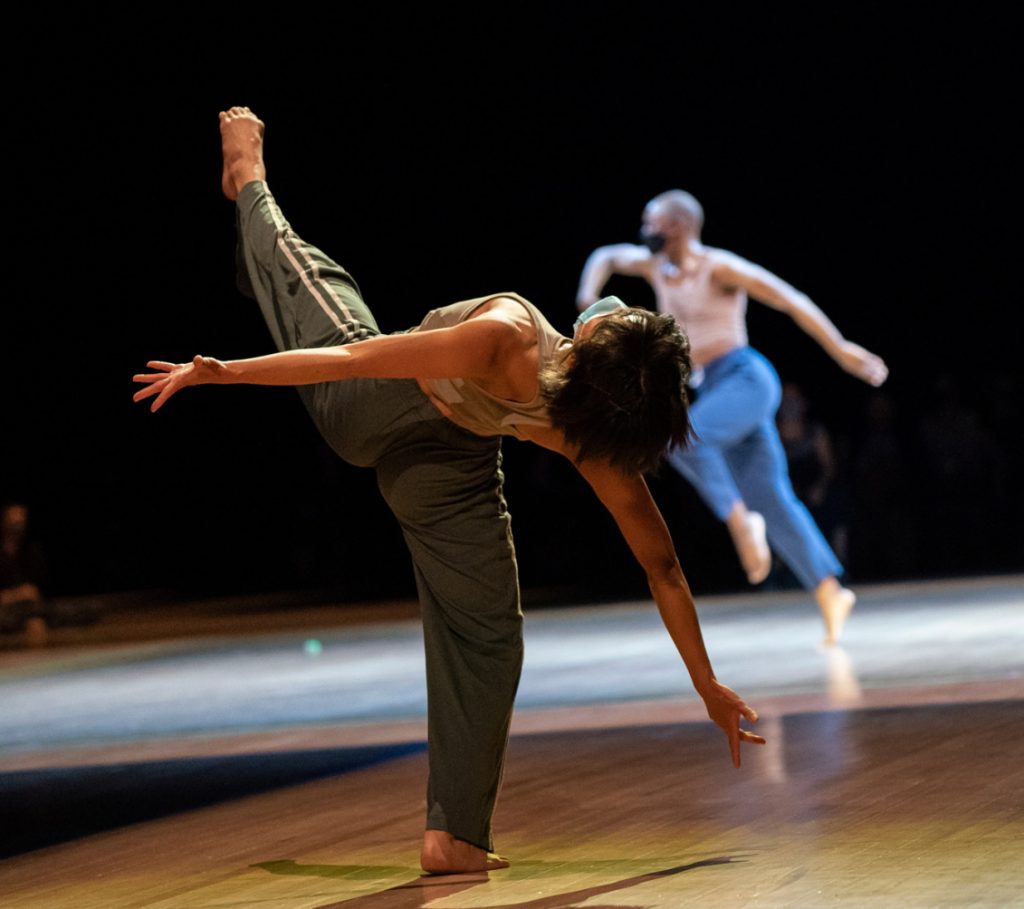 Once upon a time, I was a songwriter. This summer, one of those songs has been jingling in my head.

The first line, stolen from King Lear, is “Blow winds, and crack your cheeks!” and the chorus begins, “Rain tomorrow, rain today…”

That’s what this theater season has felt like — in fact, been like. With most of the area theaters that reopened this summer performing outdoors because of Covid restrictions, fully half the performances I was scheduled to attend were interrupted or cancelled outright by the weather.

Then there were the pandemic restrictions, which kept shifting as government guidelines and union rules were adjusted in the course of the season. Under Actors Equity mandates, at first theaters were allowed to perform as long as they did it outdoors, so they set up for outdoor performances, open-air or under tents, with masking and social distancing for audiences.

At Chester Theatre Company, audiences were obliged to seek shelter if there was lightning in the vicinity of their open-sided tent; Shakespeare & Company’s shows were allowed to move indoors in case of rain or excessive heat; and Williamstown Theatre Festival announced their performances would carry on under “light rain.”

In July, things loosened up and it was okay to perform inside, except the theaters were already set up outside. And by then Mama Nature — egged on by Papa Climate Change — had revealed a cruelly ironic sense of humor, giving us the wettest summer in decades.

In the Valley, the UMass Theater Department ventured a mix of virtual and live outdoor events in late spring. “There is a lot of romanticism invested in performing outdoors,” theater department chair Harley Erdman told me. “But in reality, outdoor performances are challenging, unpredictable and even dangerous.”

The department’s performance-art series Monuments of the Future was hampered, he said, not by rain but by “dangerous and unprecedented winds. We had one installation destroyed, another that had to be relocated indoors. Climate change is an enemy of theater too.” 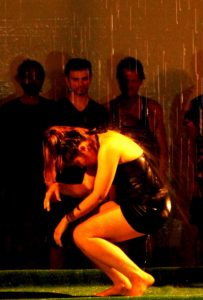 A couple of summer productions were specifically water-themed. Serious Play’s Moving Water, performed last month indoors but with lots of water on the set and even in the musical accompaniment, spoke directly to the water crisis intensified by global warming.

And in Williamstown, the world-premiere musical Row, about the first woman to row solo across the Atlantic, was set on, and in, the big reflecting pool at the Clark Art Institute. Half of the early performances were cancelled, and opening night delayed, by inclement weather — and by a walkout by sound technicians fearing for their safety: Electrical equipment and falling water are hazardous companions.

After two cancellations, I finally saw that production, and while it wasn’t open for review, thanks to the delays, I can report that the star of the show was the water, caressed by lighting which cast moving reflections of the ripples in the pool onto the actors and the wooded backdrop in the distance.

Having made it gamely through the 18-month hiatus inflicted by Covid, several Valley theaters have programmed fall seasons of live performances, indoors. With the arrival of Delta and the return to mask-wearing, capacity limits and, in at least one case, entrance only to the vaccinated, some of their plans may be altered. But as of this writing, here’s a taste of what’s coming up in the next couple of months.

K&E Theater Group will stage the musical Hello Again Sept. 9-12 at the Northampton Center for the Arts. With a title that sounds apt for this moment of reopening, it’s based on Arthur Schnitzler’s then-scandalous Victorian-era play La Ronde, revolving around a series of sexual liaisons. 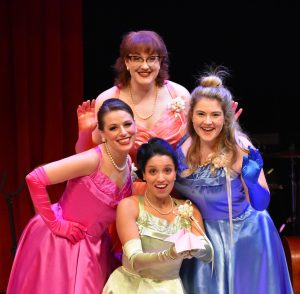 The Majestic Theater, having resurrected The Pitch, whose run was cut short when the theaters went dark last March, opens its 2021-22 season with another revisit. The Marvelous Wonderettes: Dream On, opening Sept. 9, is a sequel to the first Wonderettes, which the theater staged in 2019. Like the original, it’s a jukebox musical built around girl-group hits of the Fifties and Sixties. 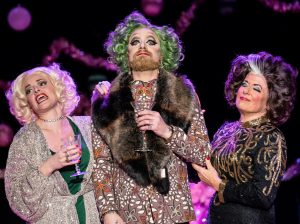 Eggtooth Productions also presents a sequel, Sept. 10-11, at the Shea Theater. The Drag Sisters: Back Where We Belong is, I’m told, “a glittery, fun-filled extravaganza where the musical magic of Etta James meets Dolly Parton meets Lou Reed meets Sia, fully glammed and busting dance moves.” It stars Joe Dulude II as “the ever-fabulous” Mr. Drag, with “sisters” Jane Williams and Myka Plunkett, plus Linda Tardif as “an Alexa-like creature.”

On another Franklin County stage, Arena Civic Theatre presents William Luce’s one-woman visit with Emily Dickinson, The Belle of Amherst, Sept. 24-Oct. 3 in Greenfield. The title role is taken by Louise Krieger, who told me that the production’s timing, in the era of pandemic lockdowns, is “serendipitous,” since Emily was a woman “who knew something of self-isolation.”

After a year of Zoom, in which I watched lots of virtual productions and helped create several (interesting, challenging, frustrating, exhausting) I’m looking forward to seeing the ghost lights go out and the spotlights come on in Valley theaters. For me, that very much includes Silverthorne Theater Company, which will stage The Mystery of Irma Vep in October. It’s Charles Ludlam’s Ridiculous Theater sendup of Victorian Gothic and Hollywood horror, with all the parts played by two quick-changing men. I have a particular interest in this one because I won’t be in the critic’s seat but in the director’s chair.

Theater in The Five Colleges is coming back too, with safety strictures. Smith, for instance, is essentially banning non-Smith people from the campus; it’s not yet clear if that will include outside audiences, or if it will apply on the other campuses as well.

If we’re invited, we can look forward to Christin Eve Cato’s Stoop Pigeons, about urban gentrification, at Smith; Josh Harmon’s Bad Jews, “about family, faith, and what you choose to believe,” at Amherst; at Mount Holyoke, a season “focused on stories by and about BIPOC individuals,” starting with Lynn Nottage’s satirical Fabulation, or The Re-Education of Undine; and at UMass, Everybody, Brandon Jacobs-Jenkins’  updating of the Medieval morality play. 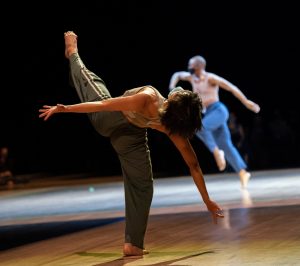 The university’s Fine Arts Center opens its dance season in October with a tribute to the legendary Pearl Primus, then Afterwardsness, a new work from the Bill T. Jones/Arnie Zane Company “that places the audience in an immersive environment with the dancers.”

The theater season just past and the one coming up might feel like the proverbial rock and hard place — the threat of weather outdoors and of infection indoors.  But the summer’s storms didn’t seem to damped audiences’ enthusiasm; let’s hope Delta doesn’t this fall.