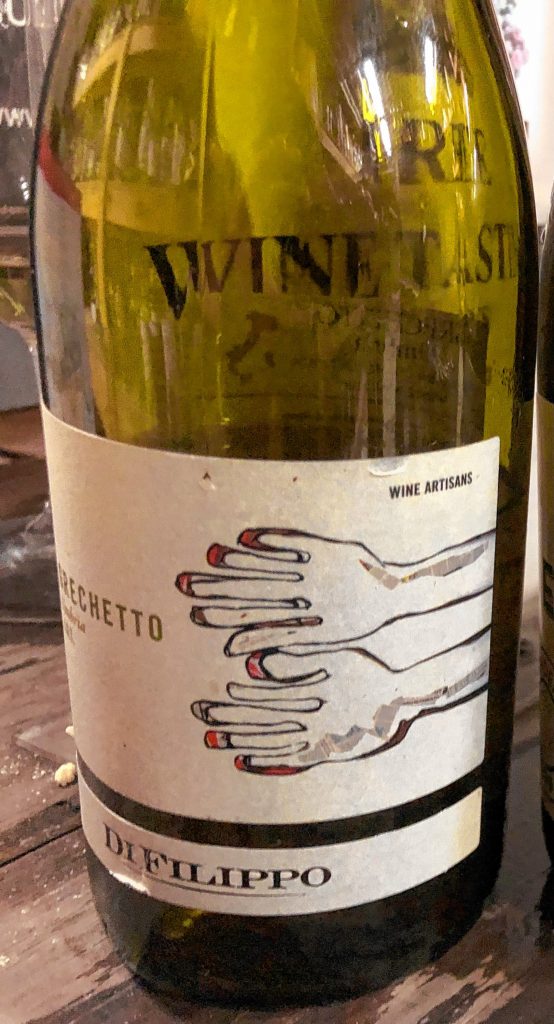 Grechetto Bianco del’Umbria IGT from the maker DiFillipo. This wine has a beautiful minerality, notes of peach and stone fruit, with a golden straw color. It’s dry and rustic, with a good balance of acid, fruit and sweetness. State Street had it on sale for less than $15. 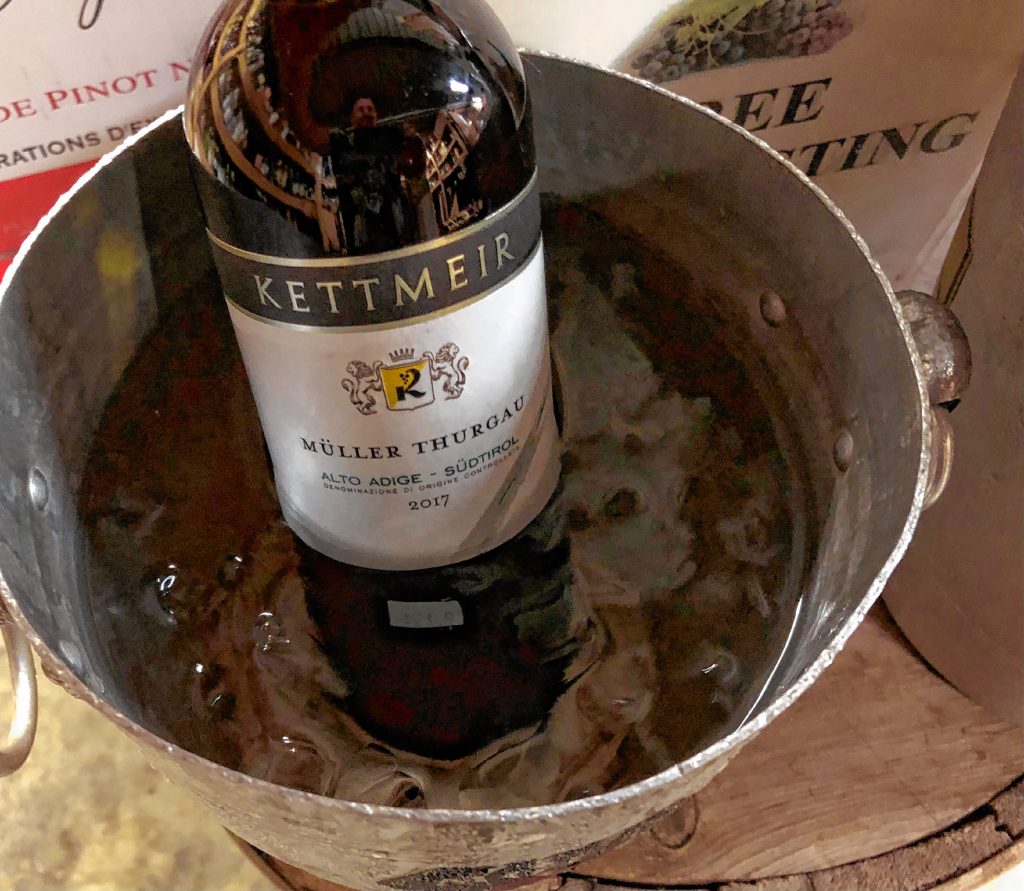 This Müller-Thurgau wine was made by the very-not-Italian sounding Italian wine makers at Kettmeir, a highly regarded wine company in the region. This wine smells incredible. A little stinky, like when fruit has just turned. You can find it for just about $20. 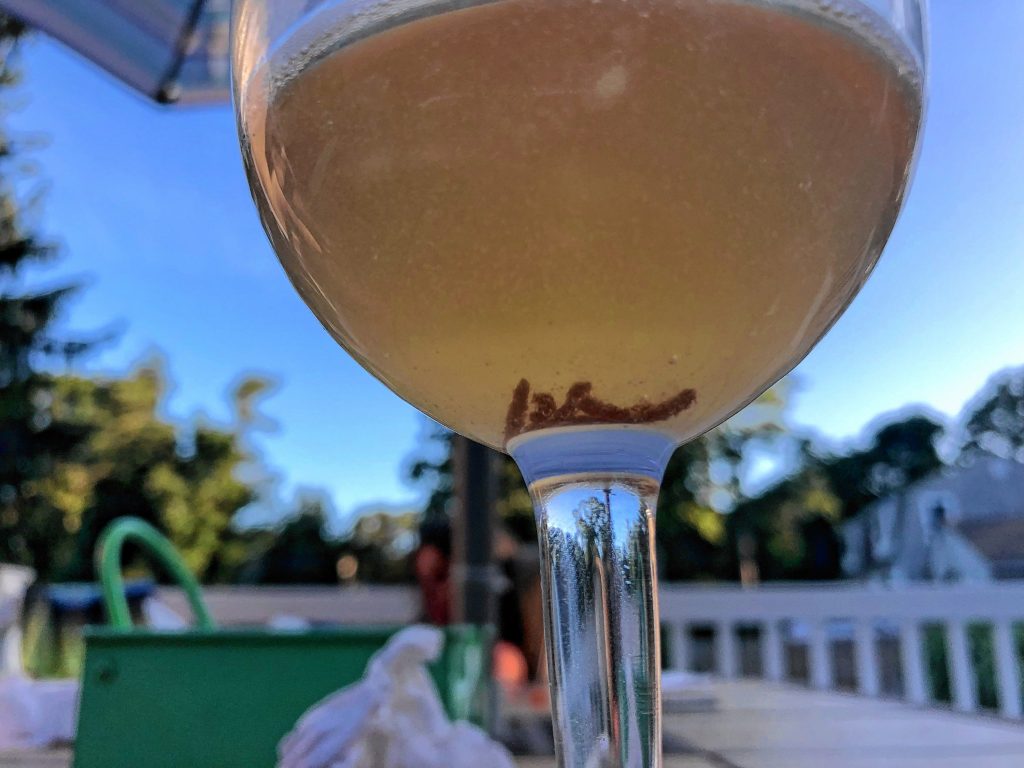 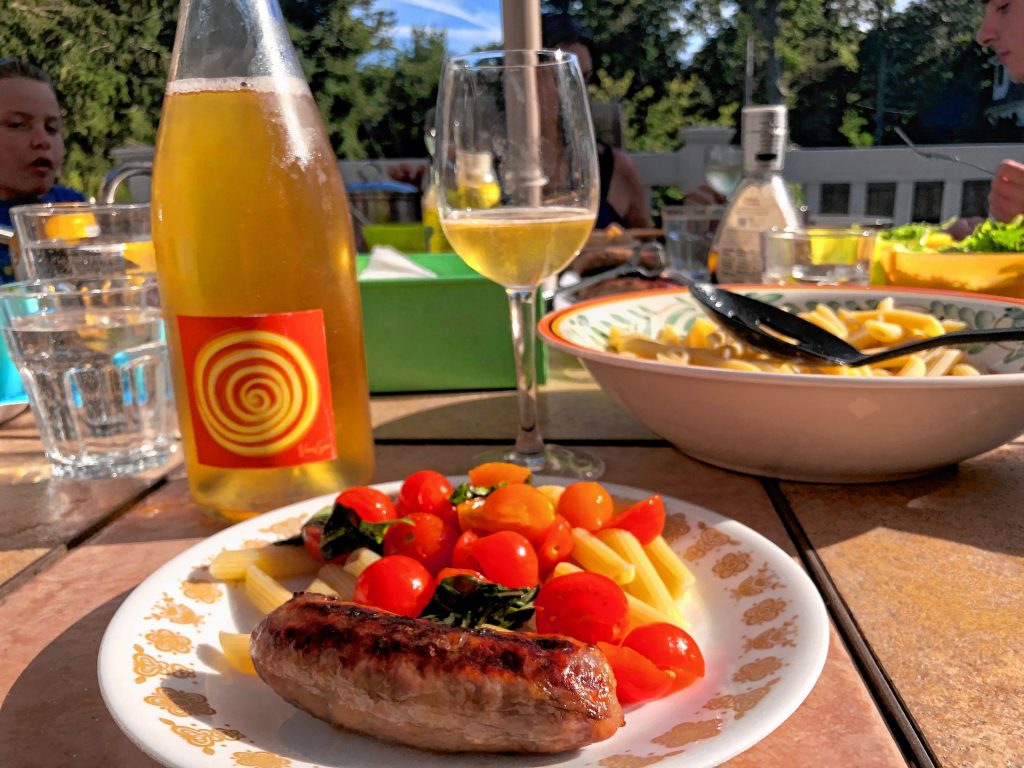 The author enjoyed this Oro di Diamanti wine with a light pasta dinner with scallops in West Yarmouth this summer.

Aren’t there enough negative Italian stereotypes to deal with besides lecherous pervert? We’re supposed to talk with our hands, not grope with them. But I couldn’t help but think of Cuomo when I was tasting an odd Italian white wine with a label featuring two creepy hands reaching out toward the unsuspecting wine connoisseur.

The wine is called Grechetto Bianco del’Umbria IGT from the maker DiFillipo. It’s a strange grape. I’m not very familiar with it. But it’s not perverted, it’s just Italian. Well, technically it’s Greek. The “Grech” is a dead giveaway. The Greek’s planted their grapes all over Europe, but Umbria is now where you can find some of the best expressions of Grechetto. It’s usually a blending grape, but this wine from DiFillipo is 100% Grechetto.

Unlike the governor, it’s good. It’s got a beautiful minerality, notes of peach and stone fruit, with a golden straw color. It’s dry and rustic, with a good balance of acid, fruit and sweetness. When it comes to Italian white wines, the American palate gravitates toward Pinot Grigio. And in the same way that I am so over the former governor, I am so over Pinot Grigio. There are more interesting and better Italian whites. Like Lady Gaga. And like that Grechetto Bianco del’Umbria. State Street had it on sale for less than $15.

Almost as many times as I have sounded like Lady Gaga by touting my Italian heritage in this paper, I have trashed Pinot Grigio in this paper. I still maintain it is the most boring grape. There are exceptions, of course. Most of the exceptions I’ve found hail from the Alto Adige region of Italy. But they are often too expensive or too rare to encounter regularly.

If you still go to restaurants, you’re very likely to see a Pinot Grigio on their wine list. Almost every single one of those Pinot Grigios is going to be boring or bad. My favorite meme I’ve seen about my least favorite grape has a picture of Bruce Lee with his famous quote: “Be formless, shapeless, like water.” And then a picture right next to it with a guy in a grape costume saying “Voila, Pinot Grigio!” It’s the water of wine.

But, in the same way that you shouldn’t give up on all Italian-Americans because of Cuomo’s indiscretions, you shouldn’t give up on all Italian white wines because of Pinot Grigio. There are so many interesting, delicious, and not-perverted Italian whites to try. If you’re a regular Pinot Grigio drinker, perhaps it’s time to broaden your horizons. That Grechetto is a good start.

The first time I trashed Pinot Grigio in this column, I was challenged by fellow Italian-American and wine salesperson for Charles River Wine Co. — Cristiano Gazzara from Northampton. When I told him I was writing another column about Italian whites and would also be trashing Andrew Cuomo, he immediately lent his expertise to the cause(s).

Cris said “Paul Jackmauh over at River Valley Coop [is] working with a lot of cool, accessible wines — having some nerdy but delicious things, while also keeping a really respectable catalogue of classic and organic wines for the co-op shopper. He’s bought a couple cases of a really neat skin-contact Pét-nat by Susanna Diamanti. It’s called Oro di Diamanti, Vines Sum Pét-nat.”

Pét-nat is the abbreviation for “pétillant naturel” — French for naturally sparkling. With champagne and other famous sparkling wines, the winemakers blend already fermented still wines together and then add extra yeast into the bottle to create a secondary fermentation, where the yeast eats the sugars and farts out CO2 bubbles that get trapped in the bottle. With a Pét-nat, the wine is bottled before fermentation is complete, and the naturally occurring, yeast-caused fart bubbles of CO2 get trapped in the bottle. It’s more “naturel.”

It’s very trendy. Older wine snobs seem to hate this style of wine, but I keep an open mind to all things sparkling. And this Oro di Diamanti that Cris suggested is really stanky, strange, cloudy, yeasty, weird and fun. Again, not perverted — just Italian. Cris says, “It’s a white sparkling natural wine from 100% Pignoletto grapes grown organically just outside Bologna in Emilia-Romagna, where half of my family is from. Pignoletto has a natural saltiness and the ancestrale method of making this wine brings out a slight toasted grain quality that beer fans will love as well. It’s truly easy drinking. I can’t imagine anyone not enjoying this wine, especially on a gorgeous sunny day.”

So true, I enjoyed my bottle with a light pasta dinner with scallops in West Yarmouth. The best/worst part? Some deliciously icky sediment at the bottom of the empty bottle.

And Cris’s thoughts on Cuomo? “I wish I could say chauvinism doesn’t play a role in Italian culture,” Gazzara said, “but I can say that more and more young Italian men are breaking away from that kind of harmful thinking. And what better way to put your money where your mouth is by supporting a daring woman winemaker from your family’s hometown?” Hear, hear.

Another somewhat perverted Italian white wine that I tried recently was made from a grape called Müller-Thurgau. This grape is like a Frankenstein monster, created by a mad wine scientist, Dr. Herman Müller, in 1882. Müller hybridized the prettier sounding grapes-Riesling and Madeline Royale-to make his monstrosity. Müller-Thurgau is widely planted in Germany and Austria.

But the wine I tried was grown in Italy, near the Austrian border, in Alto Adige. This wine was made by the very-not-Italian sounding Italian wine makers at Kettmeir. Their first winemaker in the early 20th Century was Guiseppe Kettmeir, so at least that’s more Italian. Kettmeir is a highly regarded wine company in the region. This wine smells incredible. A little stinky, like when fruit has just turned. I know that description might sound unpleasant, but who doesn’t occasionally like the smell of something “off.” It also had a nice floral nose and somehow reminded me of when I had the burnt remains of a roach on me. You can find it for just about $20. And even though it’s a little weird and unfamiliar, it’s worth every penny.

Look, if Pinot Grigio is your go-to, familiar Italian white, it might be time to move on. It has some good qualities. It served its purpose, especially during the beginning of the pandemic. It was so crushable. And reliable. Every day, same time, Gov. Cuo, I mean Pinot Grigio! But ultimately it was over-exposed, too-popular-for-its-own-good, and ultimately weak and disgusting.

But don’t give up on us. I mean those Italian whites. I believe they still have a lot to offer.