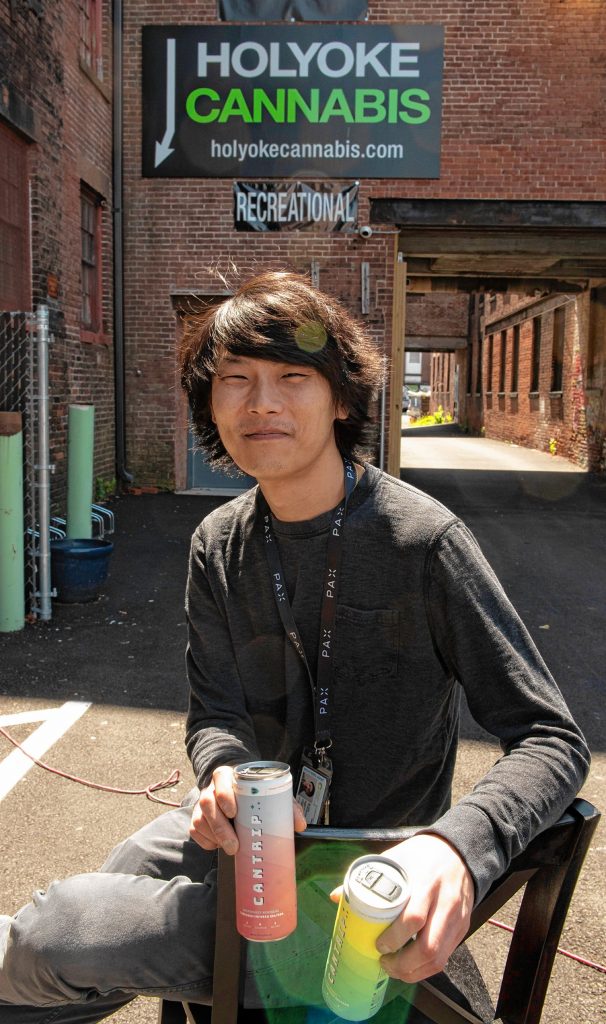 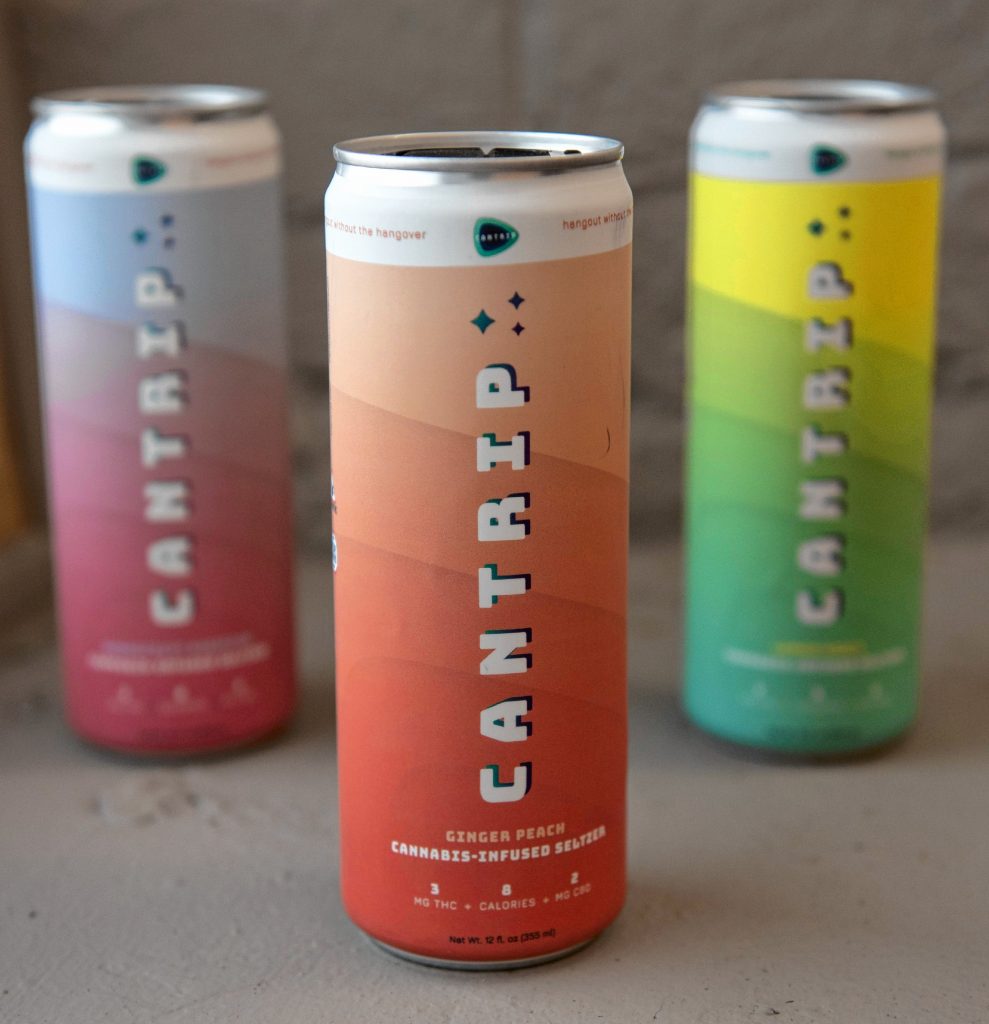 If the billboards popping up on the Massachusetts Turnpike are any indication, cannabis-infused seltzers are becoming the new “must-have” product for cannabis consumers.

But what exactly is a cannabis-infused seltzer? How is it made? And what’s the appeal? We turned to executives of two companies that sell the product in Massachusetts, Cantrip and Levia, for answers.

Hempest dispensary in downtown Northampton sells the cannabis-infused seltzers made by Levia, a Georgetown, Massachusetts-based company that launched in February and is now sold in over 70 dispensaries in the state.

Hempest owner Jon Napoli says the seltzer has quickly risen to be one of the dispensary’s best-selling products.

Napoli says, “I wanted to sell seltzer because I thought it was an easy way for new consumers to try cannabis. People are used to drinking alcoholic beverages so it is an easy shift to a cannabis-infused beverage.”

Additionally, Napoli says the seltzer is a healthier alternative for people trying to move away from more harmful substances.

Cannabis-infused seltzers use a relatively low level of THC — 2 to 4 milligrams compared to 5 to 10 milligrams in cannabis edibles — which can lead to a more controlled, user-friendly high compared to other edible cannabis products. While with other products consumers often have to wait 45 minutes to an hour to feel the effects, the seltzers enter the bloodstream much quicker, because they are being absorbed through the stomach, and can start to take effect in anywhere between two and 10 minutes.

“We always advise people to start with one and see how you feel after 15 minutes,” says Troy Brosnan, the CEO and co-founder of Levia. “If you are not quite where you would like to be, grab another and give it some time.”

Similar to hard seltzers, cannabis-infused seltzers are marketed to be enjoyed at social gatherings because the high wears off within a couple of hours.

Jess Brandon, the creative director at Framingham-based Cantrip Seltzer, explains that because their seltzer has such a low dose of THC, they refer to the beverage as the “White Claw of weed.” That’s because the product does not giving consumers the conventional stoned feeling that so many other cannabis products do.

As the cannabis-infused seltzer industry’s popularity grows, the market is quickly expanding as more manufacturing companies pop up across the state — and each company has their own assortment of flavors on the beverage.

Levia was one of the first seltzers to reach the market earlier this year. Brosnan explains that each of the company’s seltzers contains 5 milligrams of THC, the maximum serving limit allowed in beverages in Massachusetts, with zero calories and zero sugar.

Levia currently offers three blends with all-natural flavors that enhance the cannabis flavor. “Achieve” is a raspberry-lime blend that contains the sativa blend that is meant to supply consumers with a burst of energy. The “Celebrate” hybrid blend infused with the lemon lime flavor is meant to help brighten one’s mood, whereas “Dream” is the jam berry indica blend meant to help a consumer unwind and mellow out.

“If you put our seltzer next to a non-infused seltzer like Polar or LaCroix, in a blind taste test you would have a hard time telling which one had cannabis in it. We are really proud of that,” Brosnan says.

Cantrip, which launched at the end of June, is available in 22 dispensaries and is making its mark on the industry because their product contains 3 milligrams of THC, in addition to 2 milligrams of CBD.

Brandon says the company’s goal in using a lower dose of cannabis was to emphasize the sociability aspects of the beverage and to increase the relaxing effect on the consumers to help mitigate some of the harmful stigmatization associated with cannabis. Each of the company’s cans contains 2 grams of sugar with a total of 8 calories and are currently available in three flavors: lemon basil, grapefruit hibiscus and ginger peach.

Adam Terry, Cantrip’s CEO, explains how he relied on his background and mixing cocktails while he was a bartender in order to create these blend of flavors.

“I was a bartender for years and I’ve found all sorts of interesting combinations (of flavors),” Terry says. “To taste great alongside the ‘weedy’ taste that comes with putting cannabis in a product, we blend it with more herbal flavors like basil, hibiscus and peach mango, which work with the flavor of cannabis instead of trying to mask it. We also add terpenes to give it a final touch the same way a bartender uses a garnish to really add that last sense of completeness to a cocktail, and select those terpene profiles to match the flavors. The result is an experience where most consumers do not notice the weed flavor because it plays with the other flavors in a way that doesn’t stand out.”

Creating these seltzers is far from a simple process: According to Brosnan, the seltzer only has four ingredients: water, full spectrum CO2 oil, natural flavorings and an emulsion for the cannabis water to dissolve completely within the liquid. Finding the precise emulsion process that allowed the cannabis water to dissolve is the most complicated. The mixing process of the ingredients occurs in large holding tanks within Levia’s manufacturing facility in Georgetown. The tanks are rotated out approximately every eight days and each tank can produce 27,600 cans.

Before the products can be shipped to dispensaries and distributed to customers, each manufacturing company has to send a batch out to a third-party lab to verify that the beverages are within the state regulations and safe for customers. Levia sends its batches to MCR labs.

And while there are certain manufacturing guidelines that each cannabis-infused seltzer company has to follow, each company takes a certain amount of creative liberty in order to make sure that their product is unique.

Once the emulsification process is complete, they add the natural flavorings which include basil and hibiscus leaves, which are steeped on-site. The ingredients are then compiled into a tank, carbonated together and canned. Terry elaborates that their facility produces between 9,000 and 12,000 cans per week, which are shipped off to the MCR labs in Framingham for final testing.

Where to buy the product

Due to cannabis-infused seltzers still being a new product within the edible line, not all dispensaries carry them and certain dispensaries only carry specific brands. Holyoke Cannabis currently only carries Cantrip, whereas 253 Farmacy in Montague carries both Cantrip and Levia.

Both dispensaries acknowledge the products as becoming fairly popular. Jacob Black, the purchasing and marketing manager at Holyoke Cannabis, said the dispensary sold its first order in a little over two and a half weeks.

“I think a lot of people are very interested in a cannabis-infused beverage right now, so they will go out of their way to find them,” Black says.