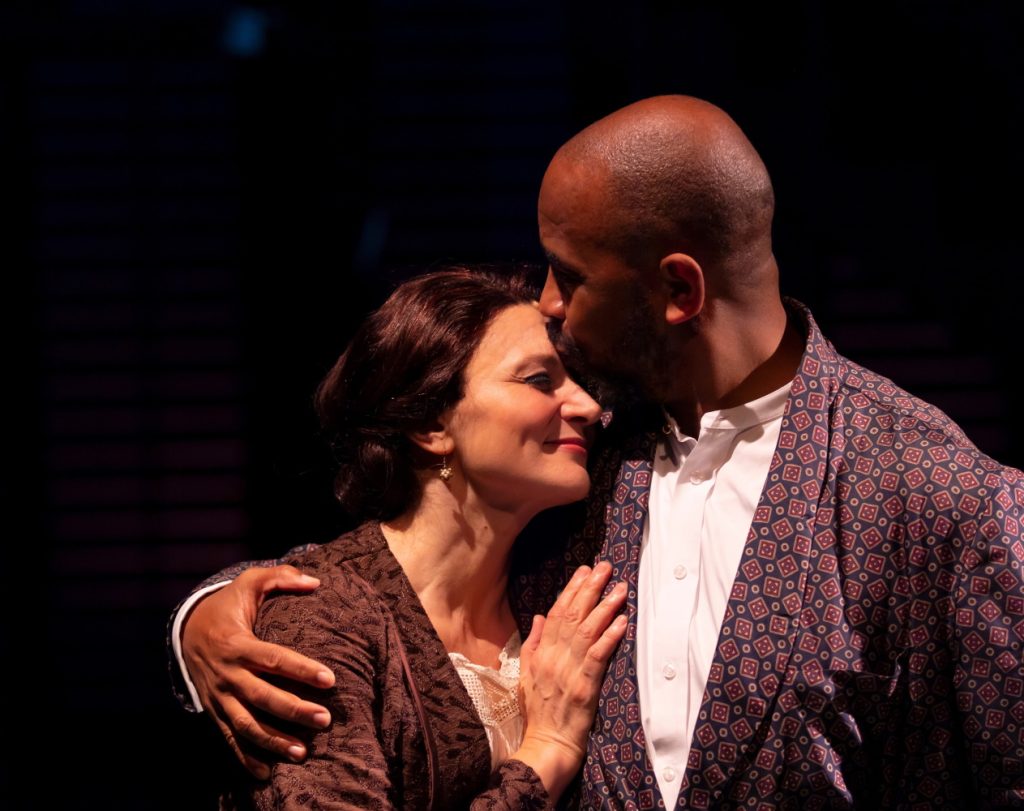 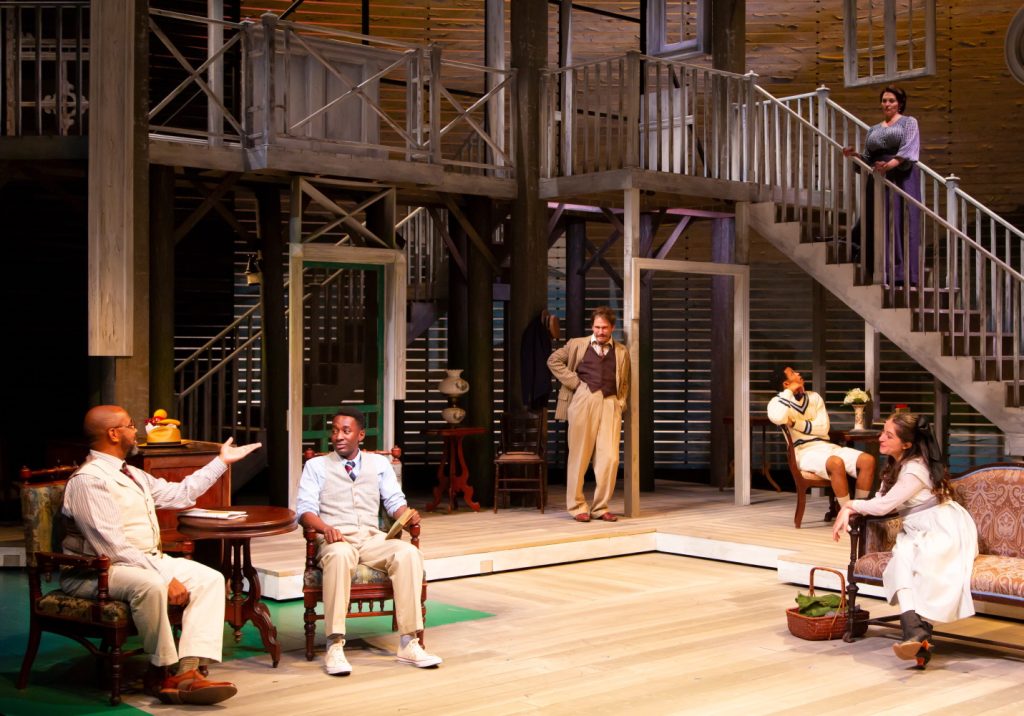 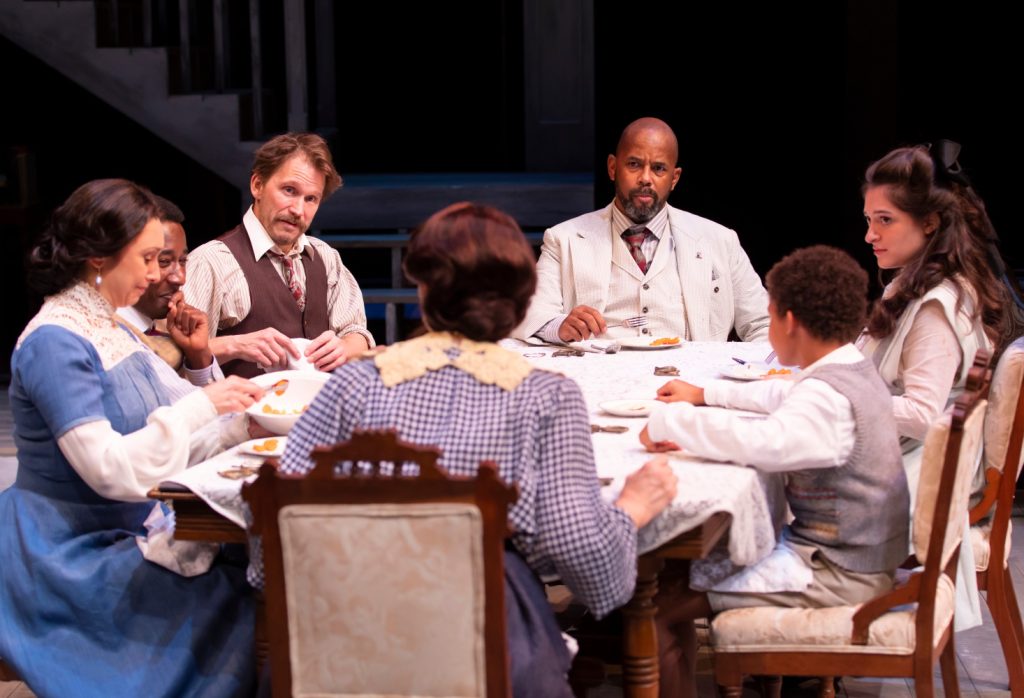 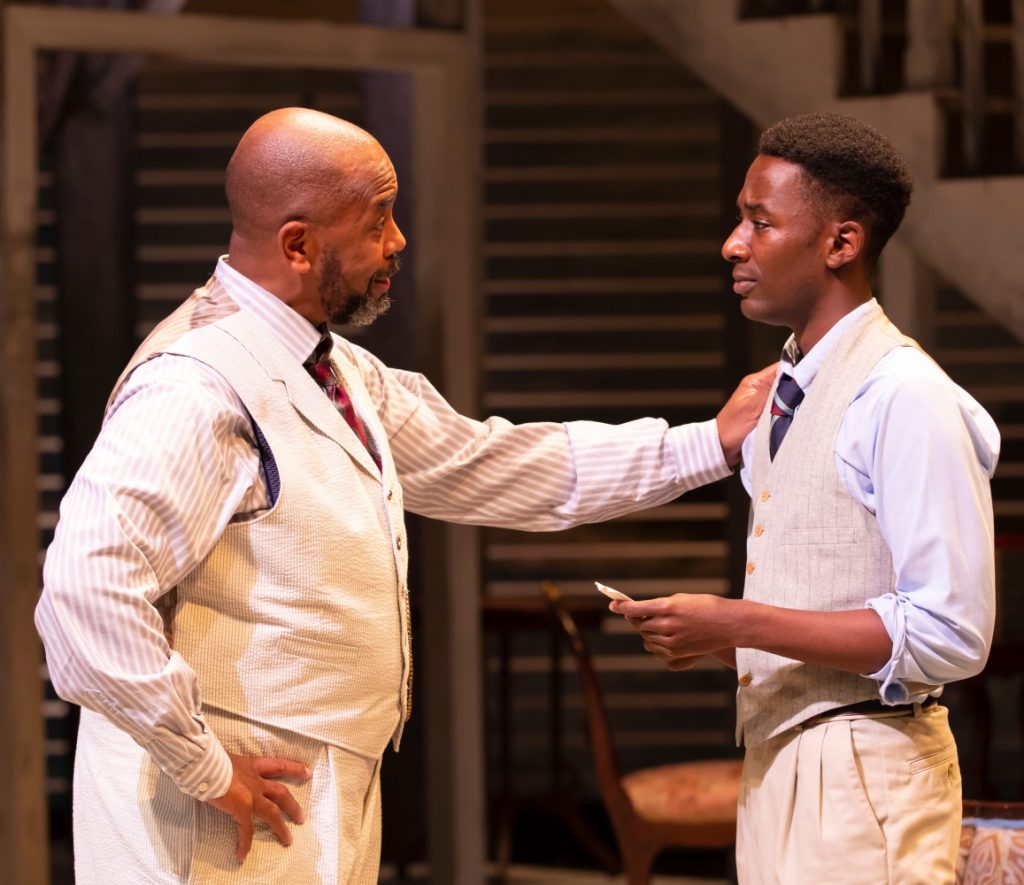 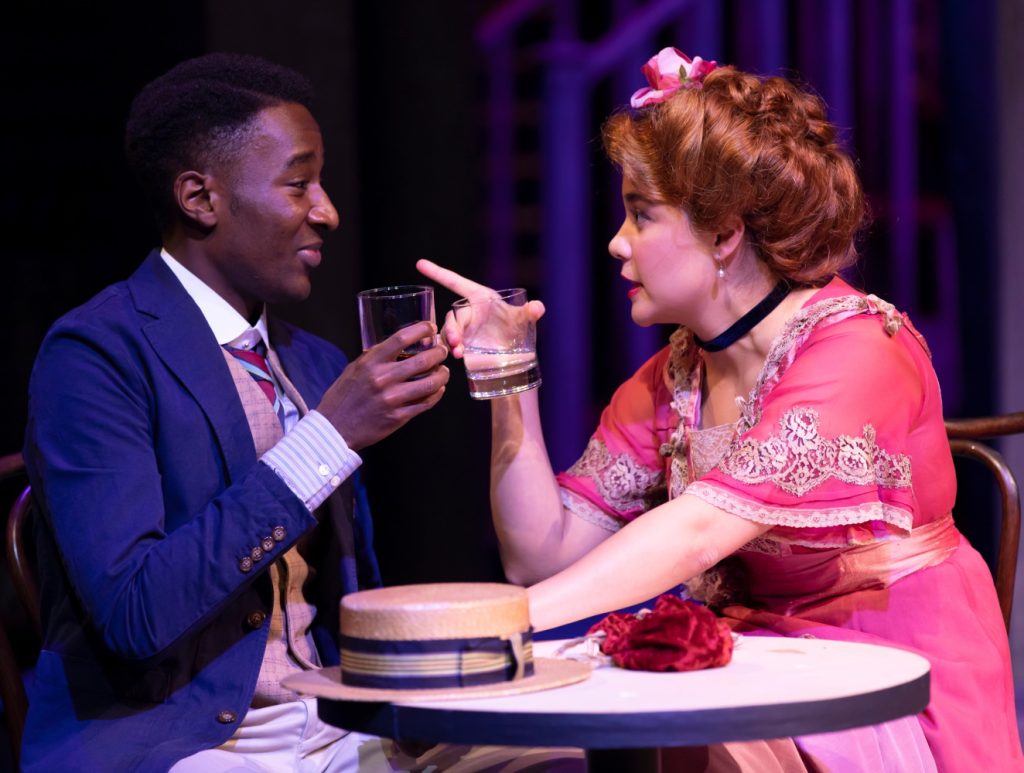 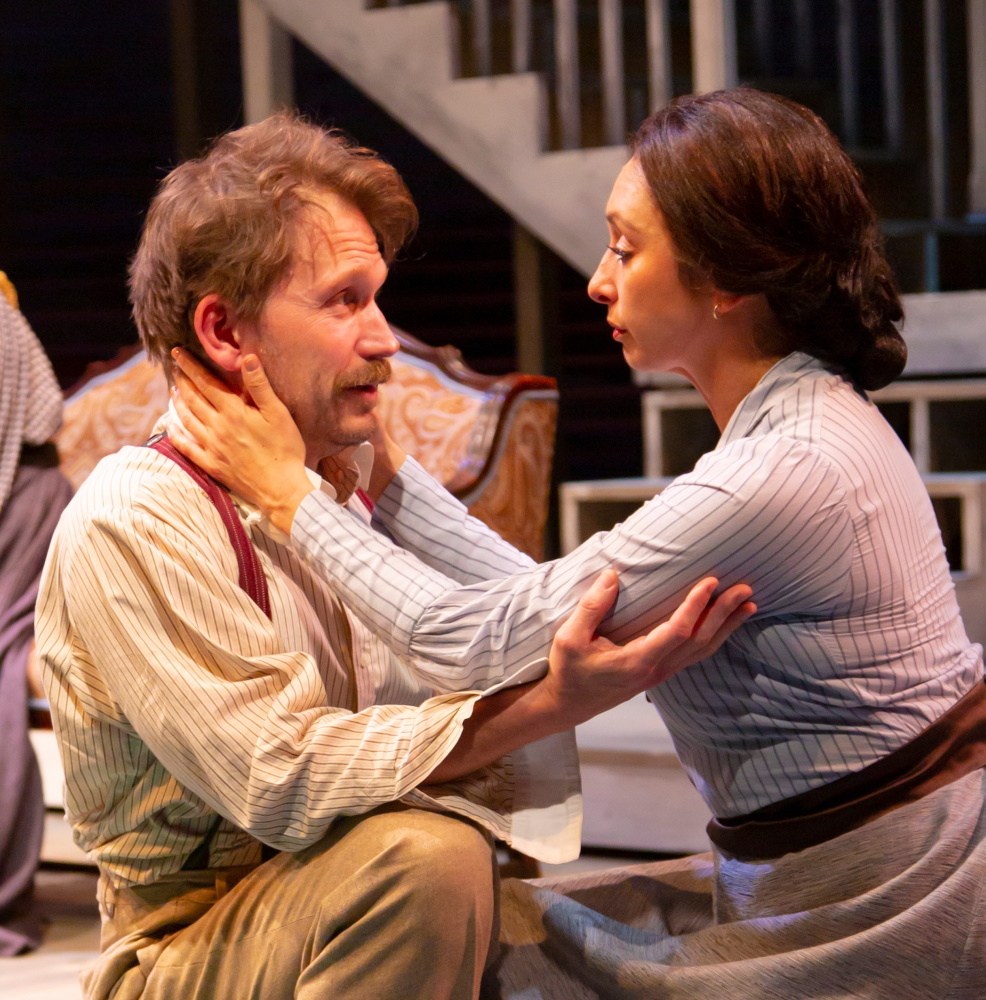 Hartford Stage scheduled Ah, Wilderness! for its spring 2020 season, then rescheduled it for that fall when Covid struck, then pushed it back a full year when the pandemic persisted. Now, Eugene O’Neill’s only comedy is opening the 2021-22 season.

Way back in BC (Before Covid) the choice seemed a bit odd – an atypical work by America’s most pessimistic playwright as newly appointed artistic director Melia Bensussen’s first production in Hartford, neither stylistically nor thematically adventurous – hardly a bold inaugural statement.

Staging it now, though, creates a new context, and a new opportunity.

Ah, Wilderness! is the anti-Long Day’s Journey into Night. Both are family dramas in which O’Neill looked back on his growing-up years in New London, Connecticut, in the early 20th century. But where that harrowing tragedy was a harsh remembrance of his actual family, headed by an alcoholic father and drug-addled mother, Ah, Wilderness! is a sunny portrait of the family he perhaps wished he could have had. It’s a small-town, middle-class idyll in which problems are easily solved and sins just as easily forgiven.

This nostalgic backward look to a time when things were (supposedly) sweeter and simpler premiered in 1933, in the depths of the Depression. Right now, vaxxed and masked, we’re looking back to the year before last, when theatergoing – and most everything else – was routine and risk-free. 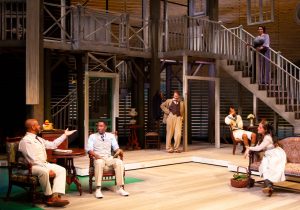 The play takes place in summer 1906, the year O’Neill turned 18. At its center is his stand-in, 17-year-old Richard Miller, a sensitive, moody adolescent given to declaiming romantic poetry and socialist ideals. (The play’s title is drawn from those famous lines in the Rubaiyat: “A jug of wine, a loaf of bread, and Thou / Beside me singing in the Wilderness – / Oh, Wilderness were Paradise enow!”)

Yearning for grown-up adventure, he drinks too much in a seedy bar peopled by painted prostitutes and rumpled salesmen – a setting that turned up later in O’Neill’s The Iceman Cometh – but retains his scruples and virginity. The piece is utterly predictable, in a satisfyingly well-made way.

Here’s the opportunity the production takes. A recent press release stated that “Hartford Stage is on a journey toward greater reconciliation with their past, rooted in exploration of its local history and the multitude of backgrounds and points of view that are present in its community so that they can be more robustly represented in the work on and off the stage.”

In other words, this theater, like so many others across the country, is having a reckoning with the upheavals of the past year-plus and has come to a tardy recognition that Black lives matter, on the stage as on the street. 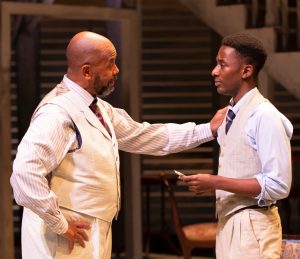 So, on this stage, Richard is Black, as are his father and baby brother. His mother, older brother and younger sister are white. Muriel, the object of his teenage passion, is played by an Asian American, and two other roles are taken by Latinx performers.

This is not the most obvious play to cast this way. (O’Neill’s earlier The Emperor Jones features a Black character, but this one is unmistakably all-white.) So it’s a safe bet that, in this moment, Bensussen would have made the same kind of gesture, no matter what the opening production was.

This, we must assume, is a case of “color-blind” casting, not a race-based reinterpretation. (When Muriel’s father voices loud objections to the boy, it’s not to his race but to the racy love letters he plies her with.) We’re invited to see past color to the humanity, as the notion of a mixed-race family living in that neighborhood at that time is as unlikely as, well, as the rest of the play’s gauzy fiction.

For me, the cognitive dissonance didn’t entirely resolve in the course of the show’s two-plus hours. But gradually, another perspective took hold. 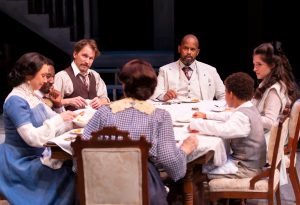 Instead of ignoring color, let’s imagine a racially mixed family dressed in Edwardian togs and using terms like “by gosh” and “skedaddle.” Let’s endow this scene with the kind of wishful thinking O’Neill must have allowed himself – not the way things were, but the way they should have been. Through that lens, we can perhaps see the production as both color-blind and color-intentional, layering the play in ways the playwright didn’t imagine, and giving us more substance to chew on.

No matter how you choose to view it, the production forcefully answers the question, Why shouldn’t actors of color be center stage in a play from the “classic” era, when they were mostly seen on the periphery in servants’ uniforms? (The maid in this household, as in the original, is Irish.)

Something else that dates this play is the cast size – 15 roles, played by a dozen actors. The implied message here is, We’re back and we’re big! 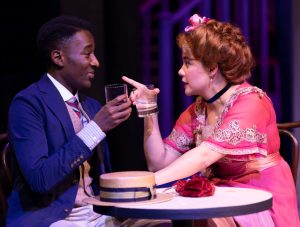 In that large ensemble, I was particularly taken with Michael Boatman as Nat Miller, the paterfamilias, whose informal air supports a moral core; Natascia Diaz, as his pained, patient spinster sister, helplessly in love with a hopeless alcoholic; and Brittany Anikka Liu, who doubles unrecognizably as sweet virginal Muriel and a blowsy whore in the downtown dive.

The overall acting style is realistic, slightly heightened by the old-fashioned dialogue. The exception is Antoinette LaVecchia, who takes a cartoonish approach to the high-strung mama Miller. As young Richard, Jaevon Williams is most effective in moments of anger or anguish; I found it hard to believe his romantic fancies or fervent idealism came from a core passion.

Notwithstanding James Noone’s spare, multilevel set (its skeletal structure sadly underused), the production remains true to its era, including Olivera Gajic’s high-buttoned costumes. Bensussen has even added period songs, accompanied at an onstage piano by Yan Li and sung by the actors as they choreographically change the settings. The show kicks off with “Yankee Doodle Dandy,” perhaps as a nod to its composer, George M. Cohan, who played Nat Miller in the original production.