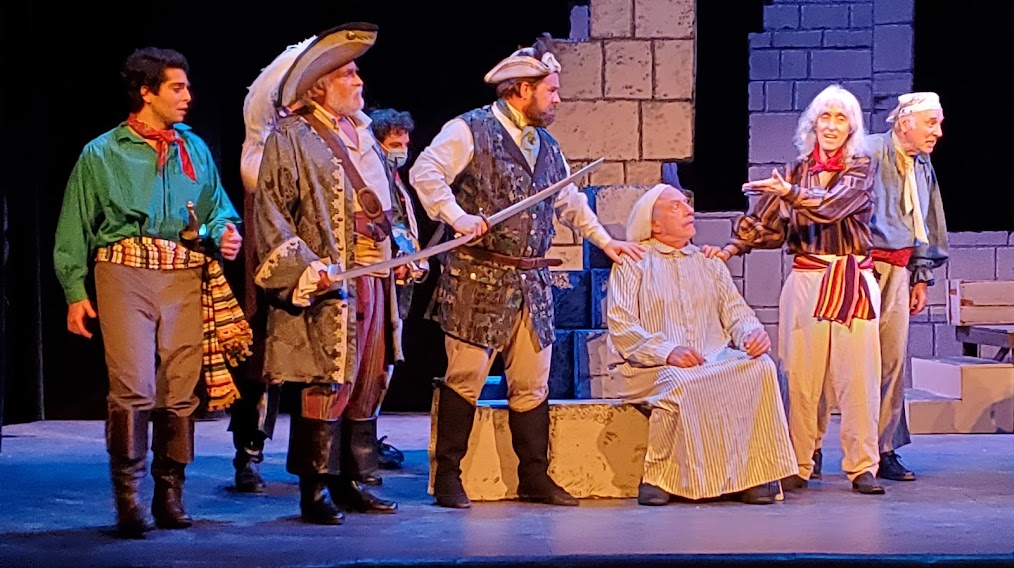 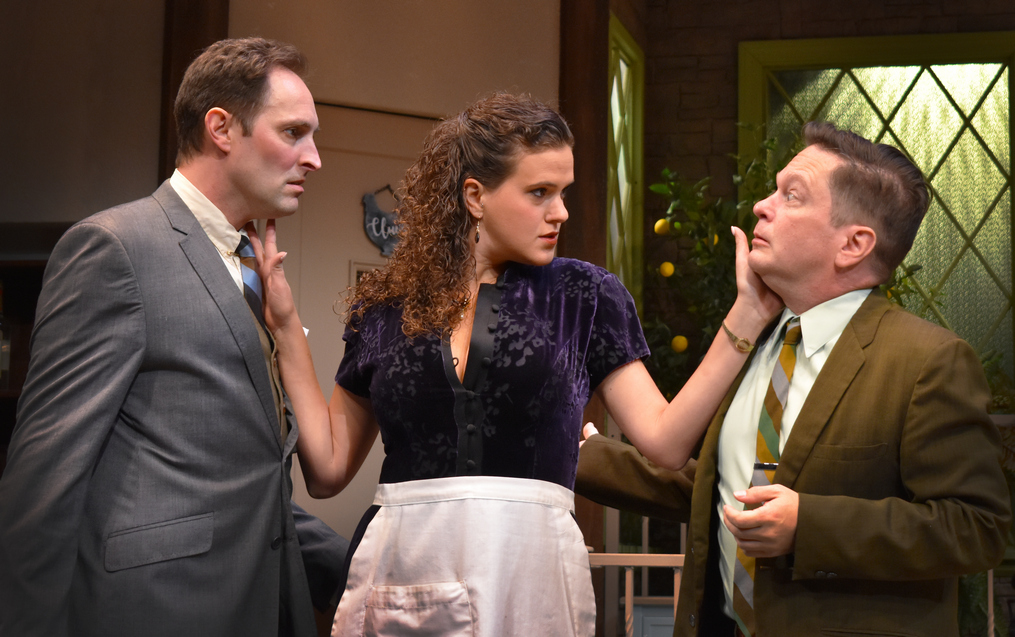 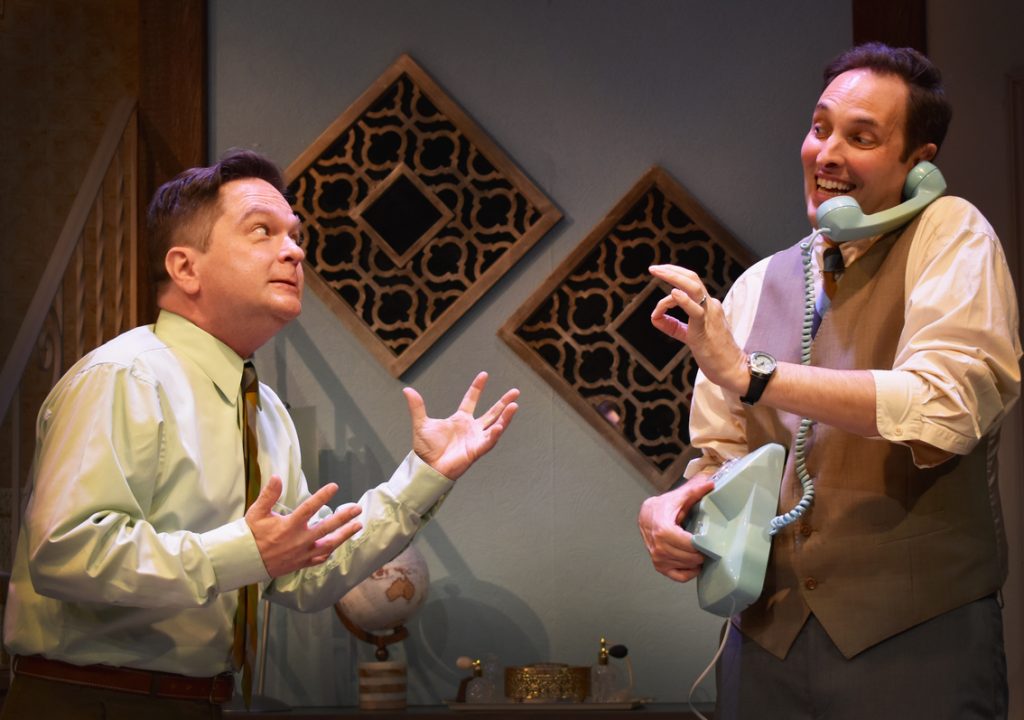 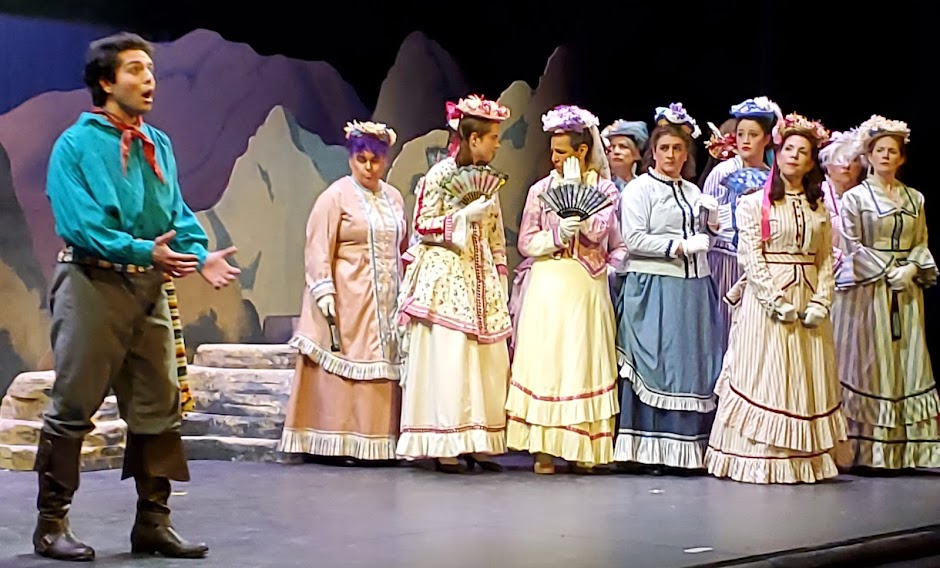 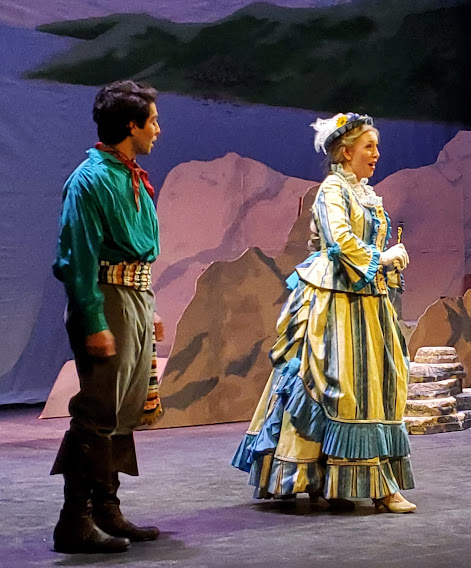 Two comedies now playing in the Valley turn on mix-ups and plot twists. Don’t Dress for Dinner is a sex farce set in the French countryside. The Pirates of Penzance is an operetta set in the hometown of “Arrr!”

I’ll admit to approaching the Majestic Theater’s current production with some hesitation. Don’t Dress for Dinner is French farceur Marc Camoletti’s sequel to Boeing-Boeing, which the Majestic staged two years ago and I pretty much hated. In that one, an artifact of Sixties smut-comedy, the swinging bachelor Bernard keeps three mistresses, all airline “hostesses” whose flight schedules land each of them in Paris in a satisfactory rotation, just missing each other – until one day they don’t. I found it boringly predictable, offensively sexist and just not very funny.

I’m relieved to report that this follow-up is rather enjoyably predictable, only slightly sexist, and really quite funny. 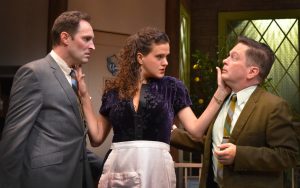 Originally titled Pyjama pour six, the English version of this one again features Bernard, now married, along with his long-suffering best friend, Robert. Again, three women figure in the mix-ups and machinations: Bernard’s suspicious wife, his secret mistress Suzanne, and Suzette, the cook he’s hired for a clandestine diner-à-deux with Suzanne.

Inevitably, there’s confusion between those Suz-names, Jacqueline doesn’t go away for the weekend like she was supposed to, and Robert gets roped into an ever-expanding web of deceptions. Oh, and did I mention that Robert and Jacqueline are having their own affair? 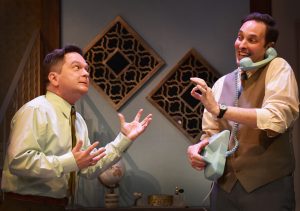 In Stephen Petit’s fast-paced production, Jack Grigoli and Scott Renzoni reprise their Boeing roles with verve and stamina – the latter required because of course there’s lots of panicky running around. Grigoli in particular, loose-limbed and rubber-faced, is a master of physical comedy and comic timing (his mimed construction of a martini at the top of the show – the first of many – got a hand).

The women are much more than sex dolls here, as their counterparts in Boeing were, though they too represent three different nationalities, with accents to match – Bethany Fitzgerald’s no-nonsense Jacqueline is English, Alexandra O’Halloran’s sultry Suzanne is French, and Elizabeth Pietrangelo’s slouchy, cynical Suzette seems to hail from somewhere in the neighborhood of the British Isles. Shaun O’Keefe makes an amusing cameo appearance toward the end, a husband-ex-machina to help resolve the plot tangles. 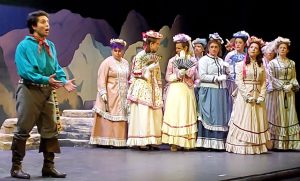 After Covid cancelled the Valley Light Opera’s production of The Pirates of Penzance last year, the troupe rescheduled it for this month, then hesitated when Delta rolled in, then took the plunge. Though the usual six-month prep time was condensed to three, I’m assured the production boasts VLO’s reliable mix of sumptuous costumes, full orchestra and cast of multi-dozens, in one of Gilbert and Sullivan’s most reliably popular shows. It plays this weekend and next at the Academy of Music in Northampton.

The Pirates plot hinges on a slip of the tongue and a trick of the calendar. Young Frederic was mistakenly apprenticed to a pirate (it was supposed to be a pilot) and because he happened to be born on February 29th, his 21st birthday, marking the end of his apprenticeship, won’t occur until he is 84. It climaxes in a not-so-epic battle between soft-hearted buccaneers and faint-hearted constables. The comic opera has one of the most memorable scores in the G&S canon, including the patter song “I Am the Very Model of a Modern Major-General” and the tune that later became Popeye’s nautical theme song. 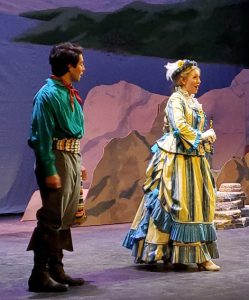 The cast of this edition of Pirates (the fifth staging of the piece in VLO’s 46-year history) includes newcomers along with veterans. Travis Benoit and Rory Mason debut as Frederic and his true love, Mabel. Stalwarts Matt Roehrig, Kathy Blaisdell, Thom Griffin and Robin Parsons appear as the Pirate King; Ruth, his “maid of all work”; Mabel’s major-general father; and the head copper.

There’s always a tension, when producing the evergreen G&S favorites, between fidelity to the source and the risk of same-old. Stage director Steve Morgan (music direction is by Aldo Fabrizi) told me recently that while it might “look like a pretty normal production,” there may be a surprise twist in the climactic revelation that the pirates are all “noblemen gone wrong.”

He has also upped the feminist quotient, turning the bevy of young beauties who comprise the women’s chorus into gals who are “not to be messed with” and making traditionally old and ugly Ruth a woman of inner pride and beauty rather than an object of derision.