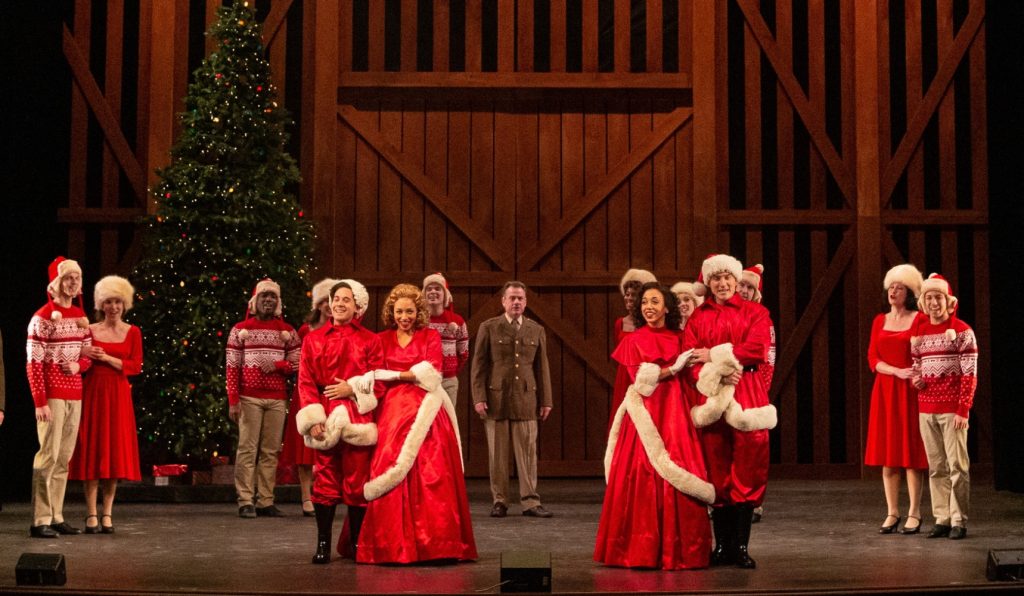 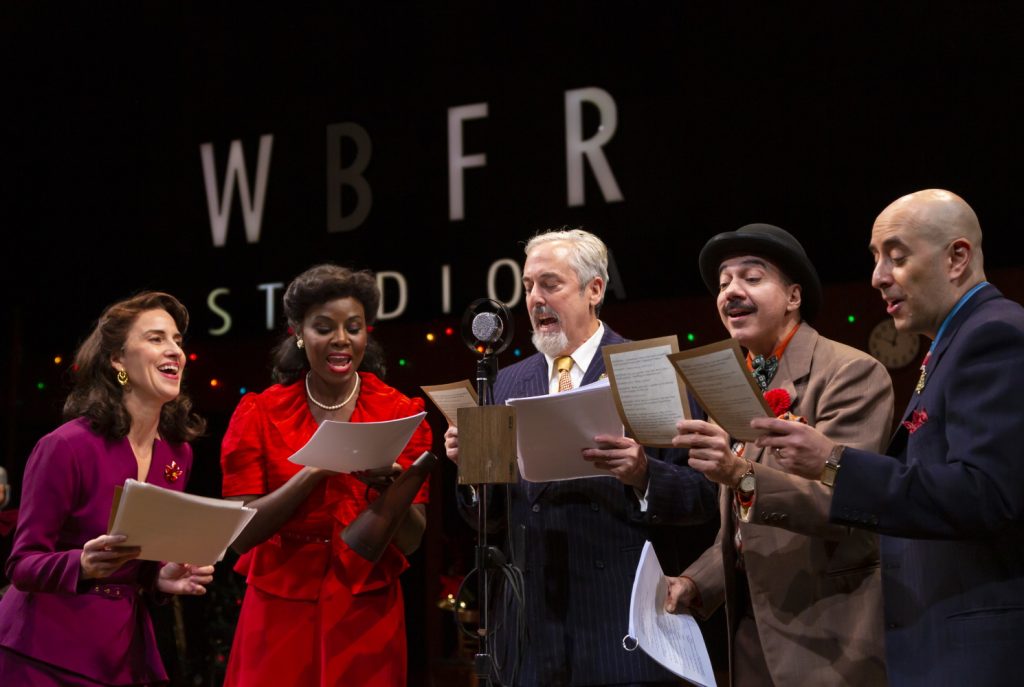 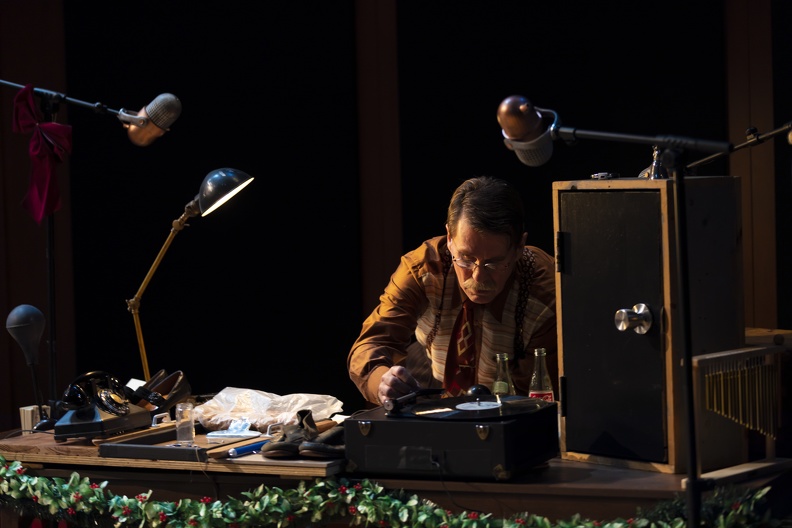 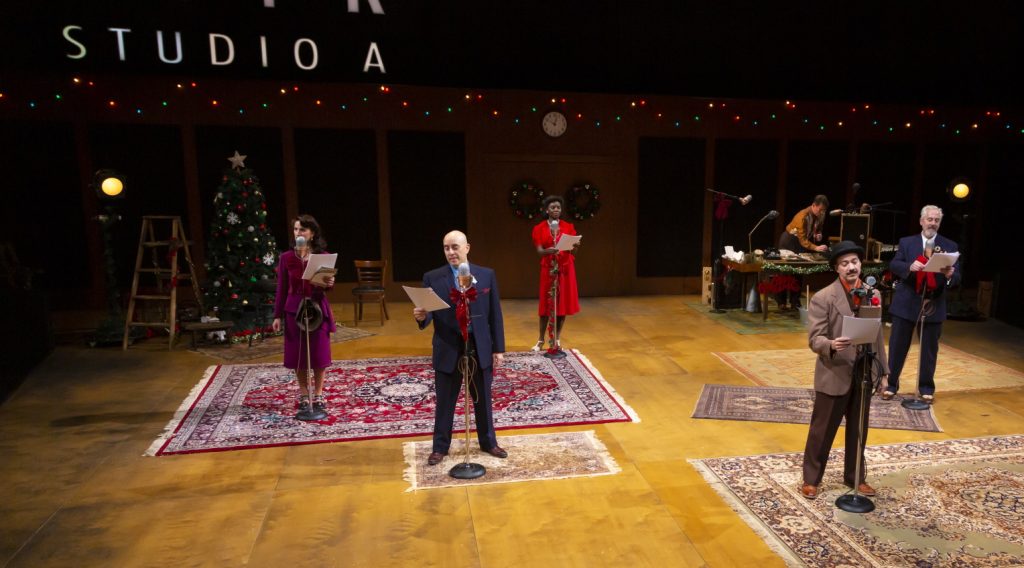 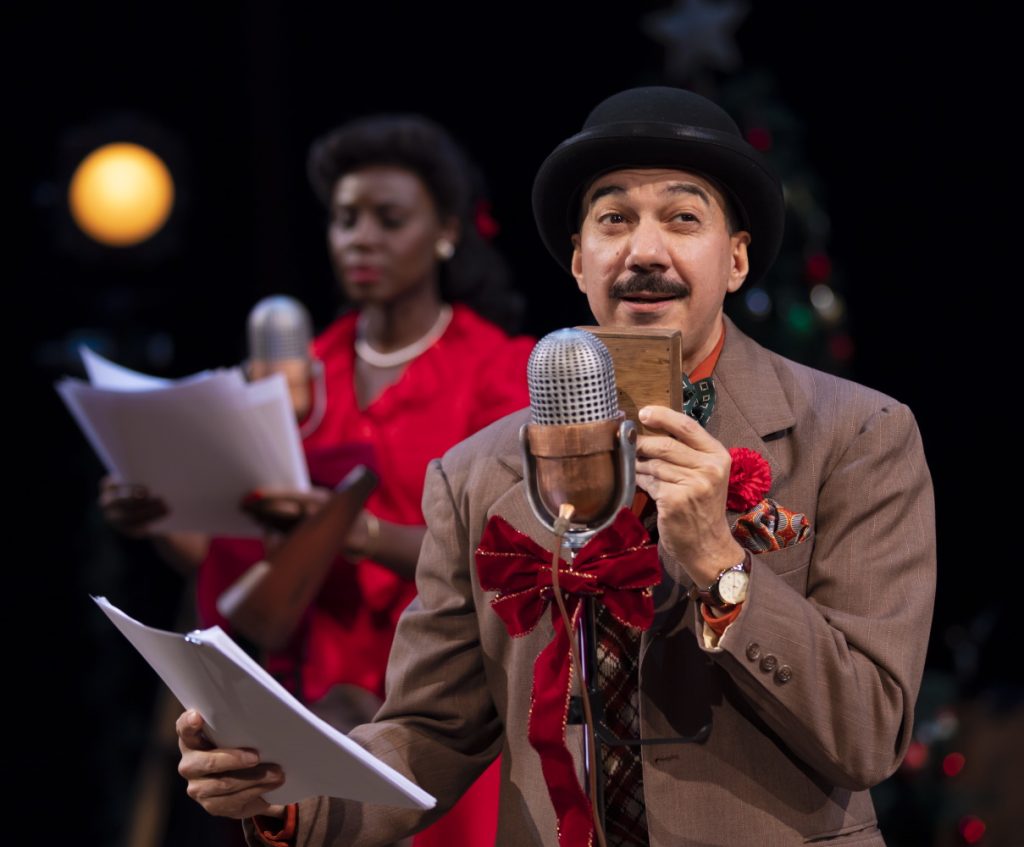 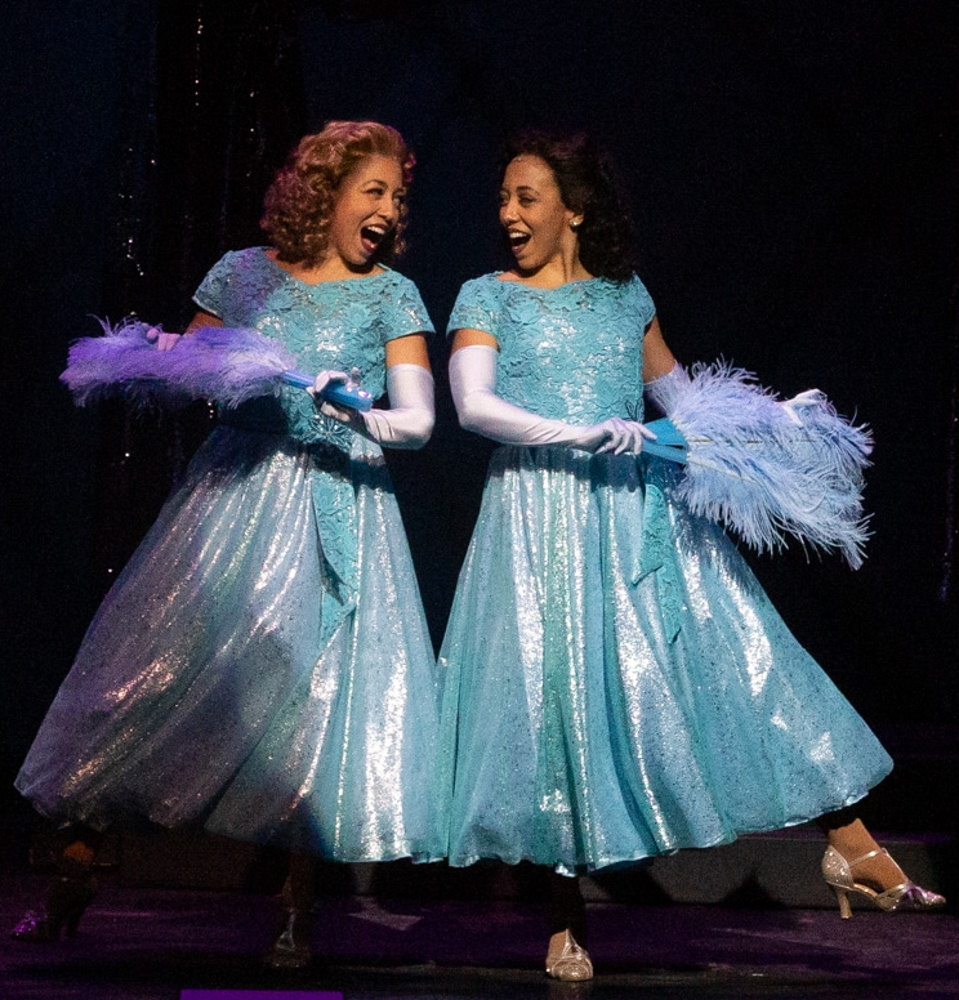 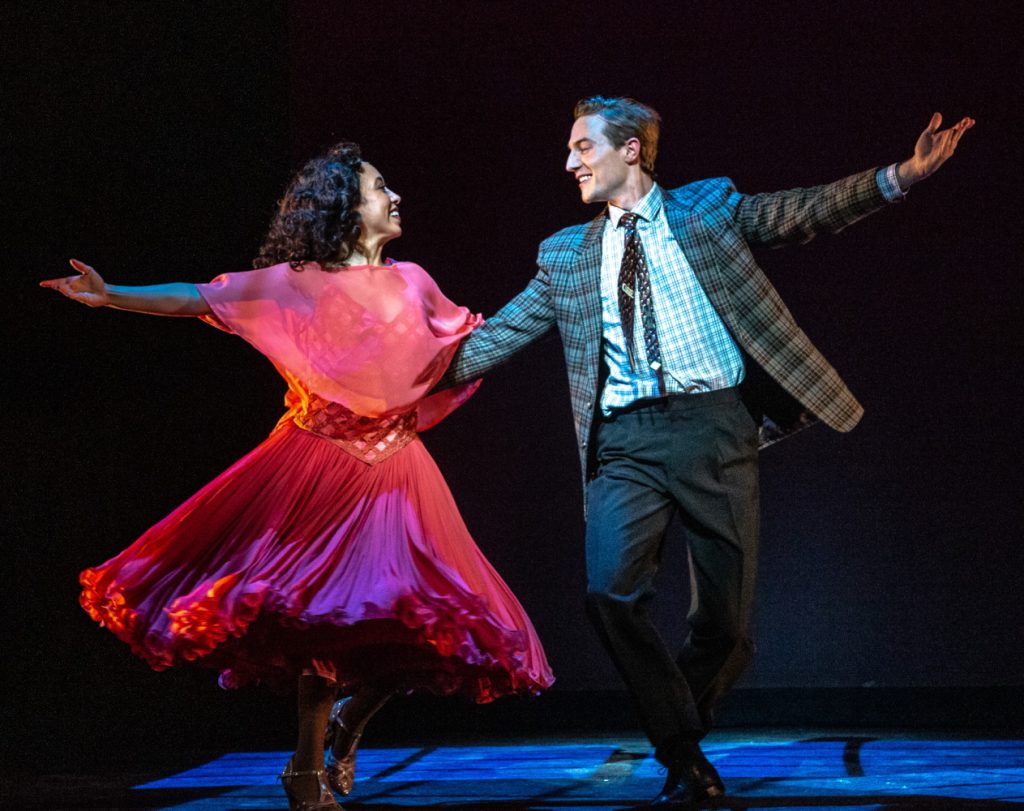 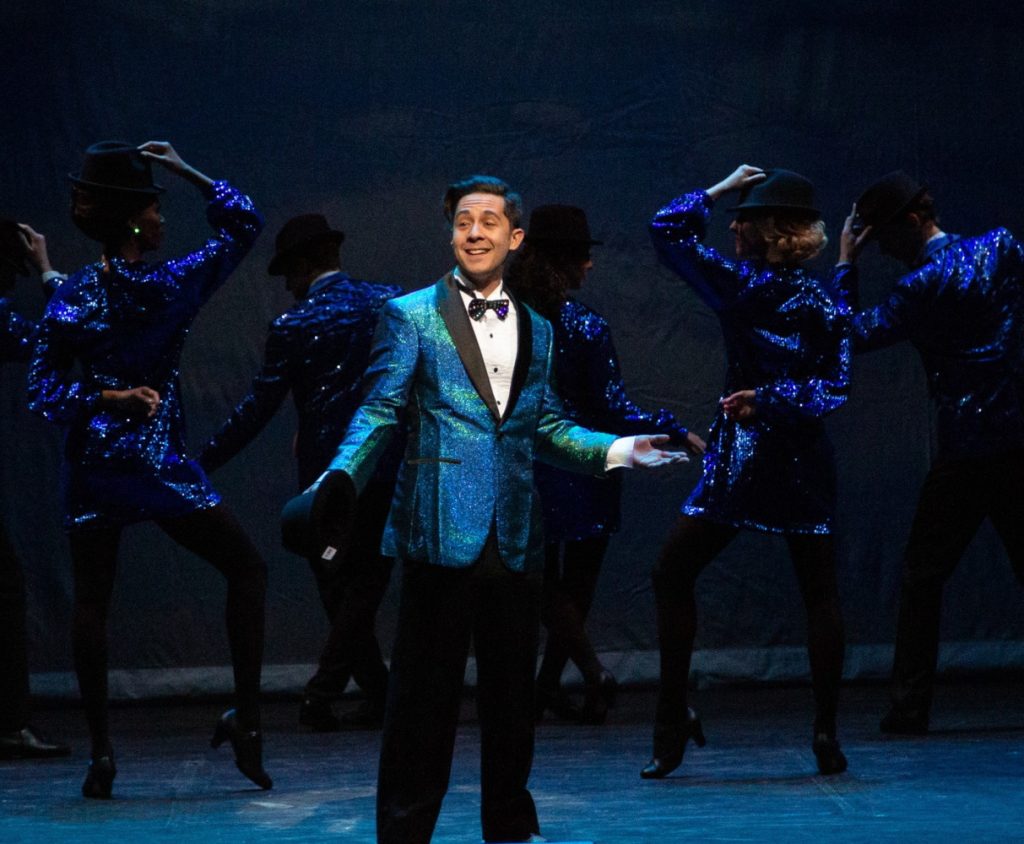 Two shows based on classic holiday movies are brightening area stages this season. In Pittsfield, Berkshire Theatre Group offers the stage adaptation of the 1954 blockbuster White Christmas, and Hartford Stage Company has moved It’s a Wonderful Life into an old-time radio studio.

It’s a Wonderful Life is as hardy a staple of Yuletide entertainment as A Christmas Carol and The Nutcracker. Frank Capra’s black-and-white classic, starring James Stewart, was made in 1946, and that’s when the radio version takes place. We’re in a broadcast studio – in Hartford, in this iteration – where a live Christmas Eve special is going out to listeners throughout Connecticut. The show runs at Hartford Stage through Dec. 26. 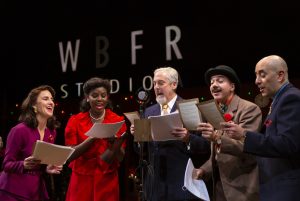 Five actors, scripts in hand, line up behind vintage microphones, acting 50 roles in different voices, their performance interspersed with hokey commercials and bubbly jingles. They are done out in Forties fashions, the men in double-breasted suits and Brylcreem, the women in shoulder-padded dresses and Andrews Sisters hairdos.

Unless you’ve been under a rock all these years, you know that It’s a Wonderful Life tells the story of George Bailey, proprietor of a small-town building-and-loan, on the edge of ruin and the brink of suicide, who’s saved by a rumpled guardian angel who shows him all the indispensable ways he has touched people’s lives. 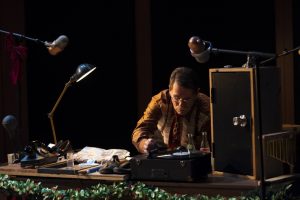 The defining ingredient of radio drama – and one of the most entertaining elements in the stage version – is the sound effects that conjure up the action the listening audience in Radioland can’t see. Leer Leary stands behind an onstage Foley table stacked with a motley collection of props: a tin thunder sheet, a squeeze-bulb car horn, a mechanical doorbell, a black rotary-dial telephone, a midget door and other noisemakers. We are the studio audience, prompted to applaud by a flashing sign, and it’s fun to watch the multitasking Leary creating the audio ambience for the radio listener, while we get to see how the auditory sausage is made.

Joe Landry’s script is an abbreviated transcription of the screenplay, with added narration to cover some transitions and without a couple of the film’s particularly visual sequences – though the movie’s two near-drownings are rendered aurally with toilet plungers splashing in a tub of water. It also cuts a couple of characters, including Annie, Father Bailey’s Black cook, presumably because Landry wrote it for a mini-ensemble he assumed would be all-white, as the film nearly is – which is ironic in the Hartford staging, since one member of this cast is Black, but just as well, since Annie is a standard Hollywood stereotype. 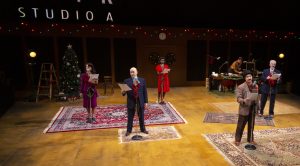 Michael Preston is the station announcer who introduces the play and the commercial breaks, as well as playing George’s forgetful uncle Billy and Mr. Potter the tightfisted banker (swapping hats to distinguish when they’re both in the same scene) as well as five other parts. Shirine Babb plays George’s adoring wife Mary as well as God’s chief of staff, and Jennifer Bareilles handles nine roles, including the village vamp and two of the Bailey children. The two women are also the cop-and-cabbie team Bert and Ernie. (Sorry, the story that those Muppets were named after this pair is apocryphal.) 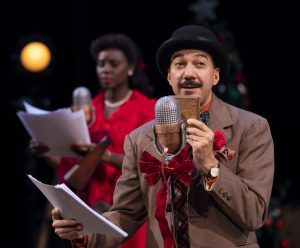 Evan Zes is the most versatile actor in the group, with an elfin face and lively limbs. He’s rewarded by being given the most characters to play with, ranging from angel-in-training Clarence to the voluble Mr. Martini, the savings-and-loan’s most grateful customer.

Only Gerardo Rodriguez plays just one role: George Bailey himself. Perhaps hoping to evade the shadow of Stewart’s laconic, aw-shucks persona, he gives us a high-energy, fast-talking George, which sometimes works against the character’s good-guy core.

Co-directors Melia Bensussen and Rachel Alderman move things at a pell-mell pace that sometimes turns too frenetic, but then, just as the radio concept is getting redundant – and George is at a crisis point – they break the convention. The actors drop their scripts and perform the final third of the play for real. When they face each other instead of the microphones, they fill out the relationships and the heart of the piece comes touchingly through.

If the radio Wonderful Life is a minimalist reimagining of the original, the stage version of White Christmas is positively lavish. A colorful troupe of 20 sets the stage alight in Pittsfield’s Colonial Theatre, where Berkshire Theatre Group’s production runs through Dec. 23.

Irving Berlin’s White Christmas The Musical – that’s the complete official title, no punctuation – is a variation on a spinoff. The 1954 Technicolor movie was a sequel of sorts to Holiday Inn, a Bing Crosby-Fred Astaire vehicle featuring songs from Berlin’s catalogue and holiday-themed numbers written for the film, including “White Christmas.” (Bing’s recording of the song is still the best-selling single of all time.)

White Christmas wrapped the holiday theme and the Green Mountain setting into a plot about two old army buddies, Bob Wallace and Phil Davis, now a famous song-and-dance team, whose commanding officer has retired to be proprietor of a country inn and is struggling to keep it open – especially because there’s been no snow this winter. The boys are joined by song-and-dance sisters Betty and Judy Haynes – played in the movie by Rosemary Clooney and Vera-Ellen – then the entire cast of the show they’ve been preparing for a New York opening comes up to continue rehearsals in – where else? – the barn.

The film was meant to reunite Crosby and Astaire, but Fred backed out and was replaced by Danny Kaye, not exactly known as a hoofer, but coupled with Vera-Ellen, a dancer-only whose voice was dubbed for her songs. The stage musical restores the dancing/singing balance, with lush sequences choreographed by Gerry McIntyre and Bryan Thomas Hunt and featuring the show’s energetic ensemble. Indeed, it sometimes seems like every other song opens out into a production number. “Snow,” for instance, sung in the movie by the four stars seated at a table in a railway club car, explodes here as all the other passengers join in. 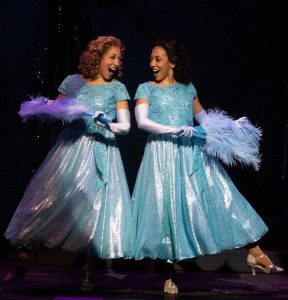 The stage version, with a script co-written by comic master David Ives (All in the Timing), takes liberties with the screenplay, and borrows freely from the Berlin songbook, adding familiar tunes like “Blue Skies” and (thankfully) deleting a routine performed in blackface. Several elements, though, are reproduced faithfully from the film, including the “Sisters” number, performed by the Hayneses with large white feather fans – and later reprised by the boys using the same props. (After the inevitable romantic mishaps and misunderstandings, of course, the foursome pair off happily.) 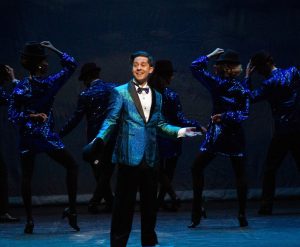 The all-pro Berkshire cast, directed by Gregg Edelman, fairly glows with holiday spirit. Of the male leads, I was particularly taken with Michael Wartella, effortlessly charming as Bob, Bing Crosby’s role – though the part’s range has been shifted from baritone to tenor, I guess because no one can compete with that dark-velvet voice. 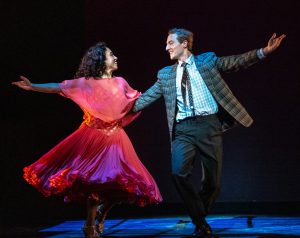 In another departure from the film, Bob’s partner Phil is a habitual skirt-chaser, continually distracted from courting Judy Haynes by a pair of squeaky, simpering chorus girls, played by Aliah James and Kelly Sheehan. Michael Starr is no Fred Astaire (who is?) but he’s no Danny Kaye either, and he dances with grace and flair, especially when he’s paired with nimble Alanna Saunders as Judy.

She in turn is paired with her actual sister, Claire Saunders, who was at BTG last summer in The Importance of Being Earnest. Claire is the weaker dancer but the stronger actor. It’s clear the two sisters are delighted to be onstage together – their duo scenes sparkle with verisimilitude.

In non-singing roles, Berkshire favorite David Adkins plays the general who’s about to surrender to an implacable enemy, the weather, and Timothy Gulan is the taciturn handyman whose conversation consists mostly of “Ay-yup.”

In the movie, the general’s housekeeper is a starchy, sharp-tongued comic relief. Here she’s that and more, an old trouper itching to get back onstage, and Alison Briner Dardenne uncorks a barn-burning solo by way of audition to join the cast. Fourteen-year-old Madison Cyrulik gets her own moment in the spotlight as the general’s granddaughter who also harbors a showbiz yearning.

The fast-moving action takes place in multiple settings, from the rustic inn to a glitzy New York nightclub. Randall Parsons’ modular sets are rolled onstage and flown in from above, making for swift scene changes that keep the pace alive. The eight-piece pit orchestra, led by Ross Patterson, has the nostalgic feel of a Forties nightclub bandstand. And the costumes! – Elivia Bovenzi Blitz has outfitted the cast and chorus in what looks like different outfits for every scene, an extravagance that must have broken the piggy bank but gives the show its eye-popping pizzaz.

Both of these Christmastime classics are irresistibly sentimental and universally appealing. In the end, disaster is averted through good-hearted generosity, a plentiful dose of community spirit, and a snow-spangled finale. As Clarence, the angel-in-waiting who earns his wings by saving George Bailey, puts it, “Remember, no man is a failure who has friends.”

PS – I hear Paul McCartney is working on a musical based on It’s a Wonderful Life. Now I’m waiting for Love, Actually: The Musical.