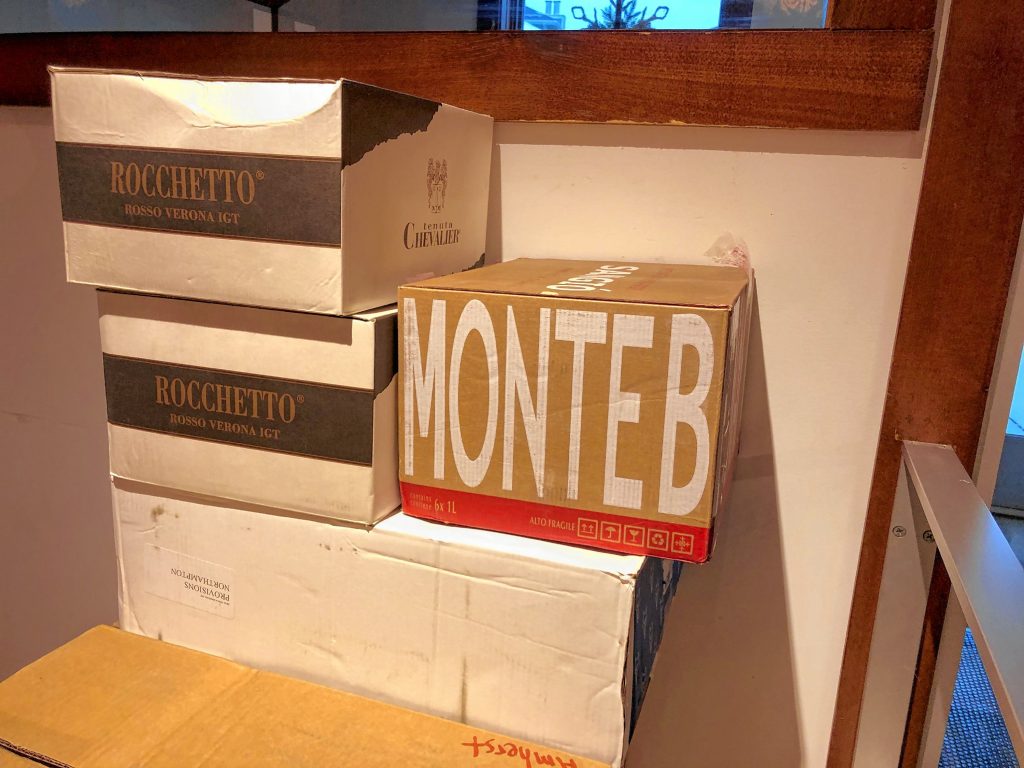 A personal invitation for the wine columnist? 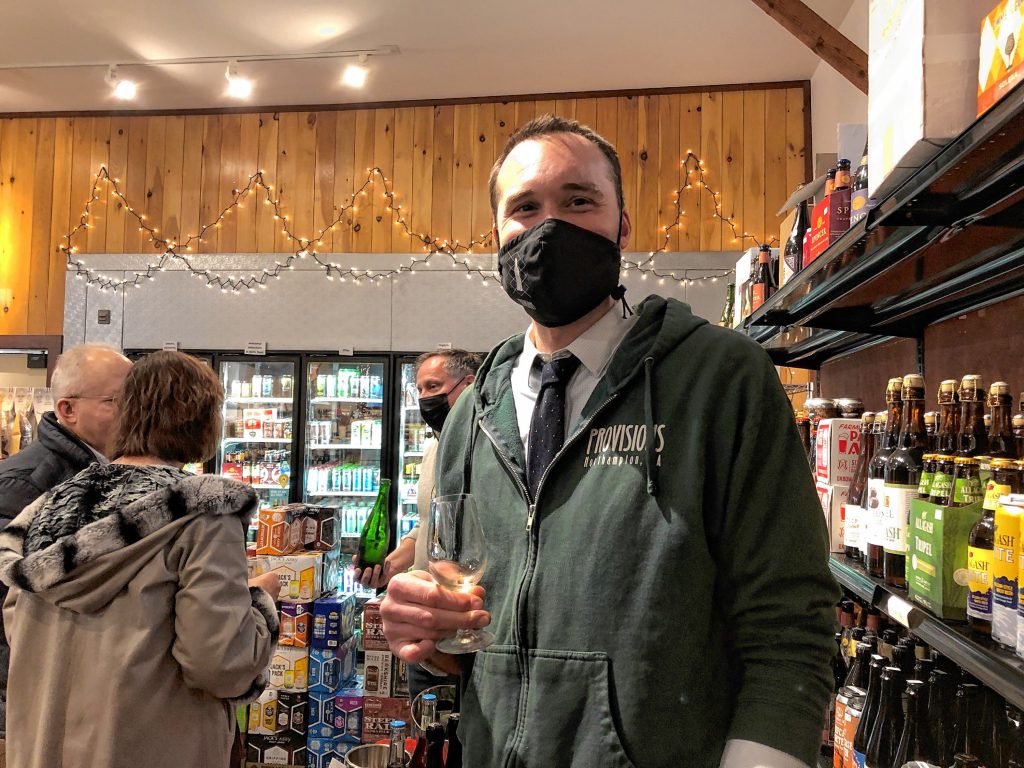 Provisions owner Benson at the Grand Champagne Tasting Dec. 11, which celebrated the opening of their new store in North Amherst. 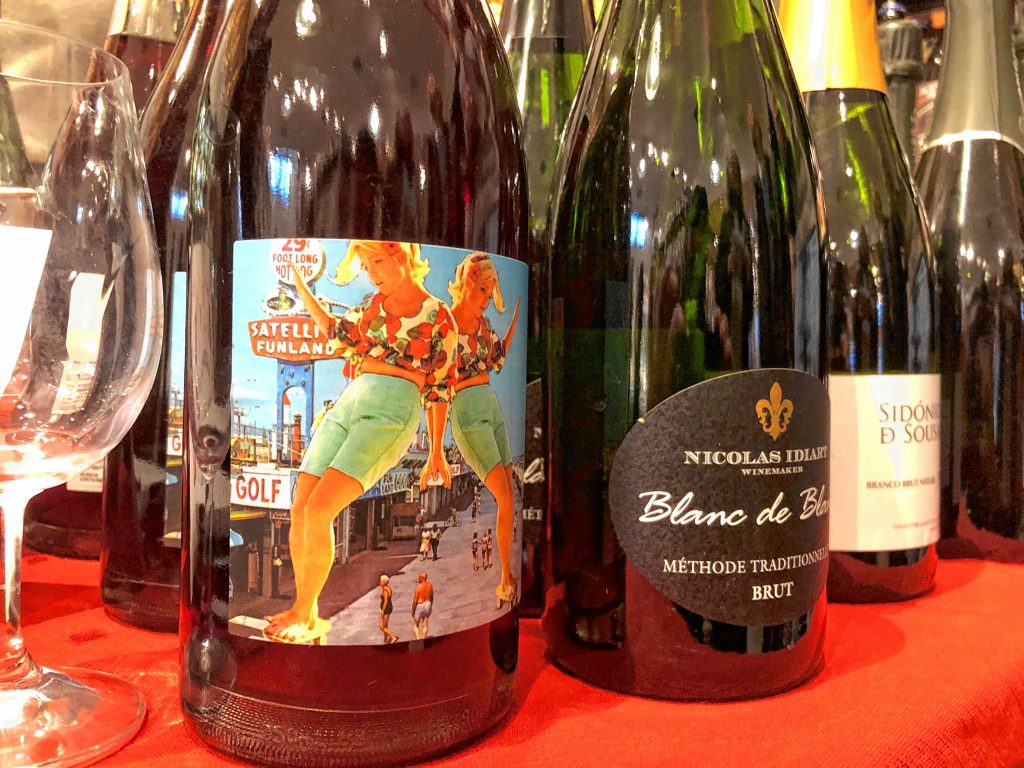 Some of the tastings offered up at the Grand Champagne Tasting Dec. 11, which celebrated the opening of their new store in North Amherst. 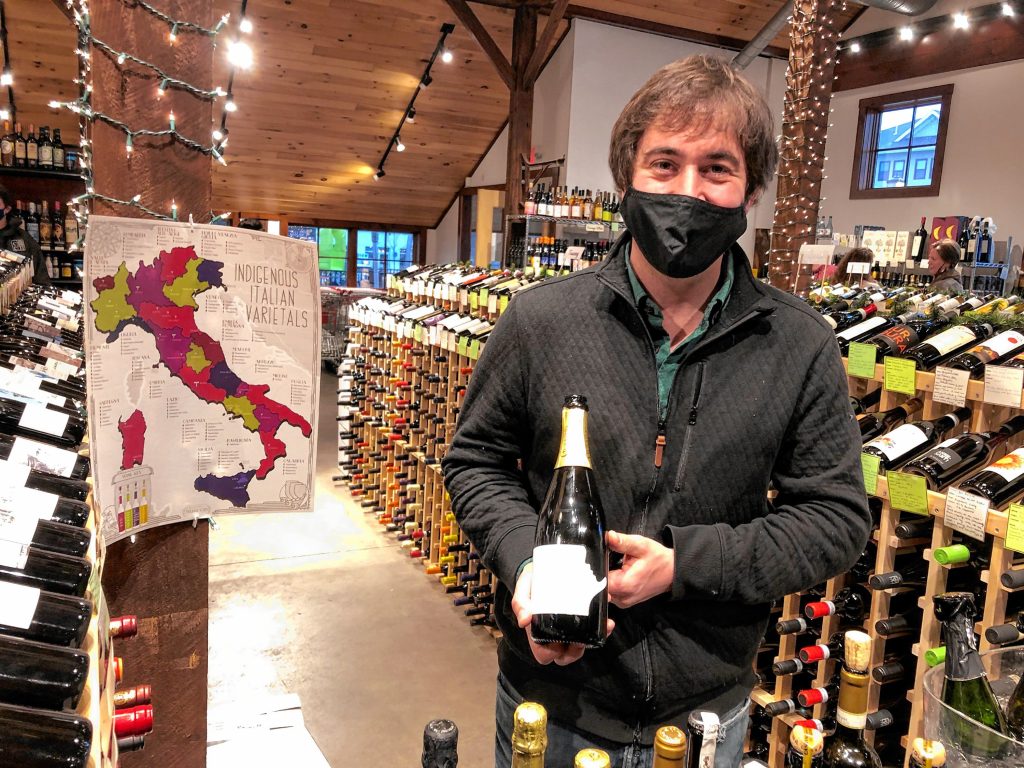 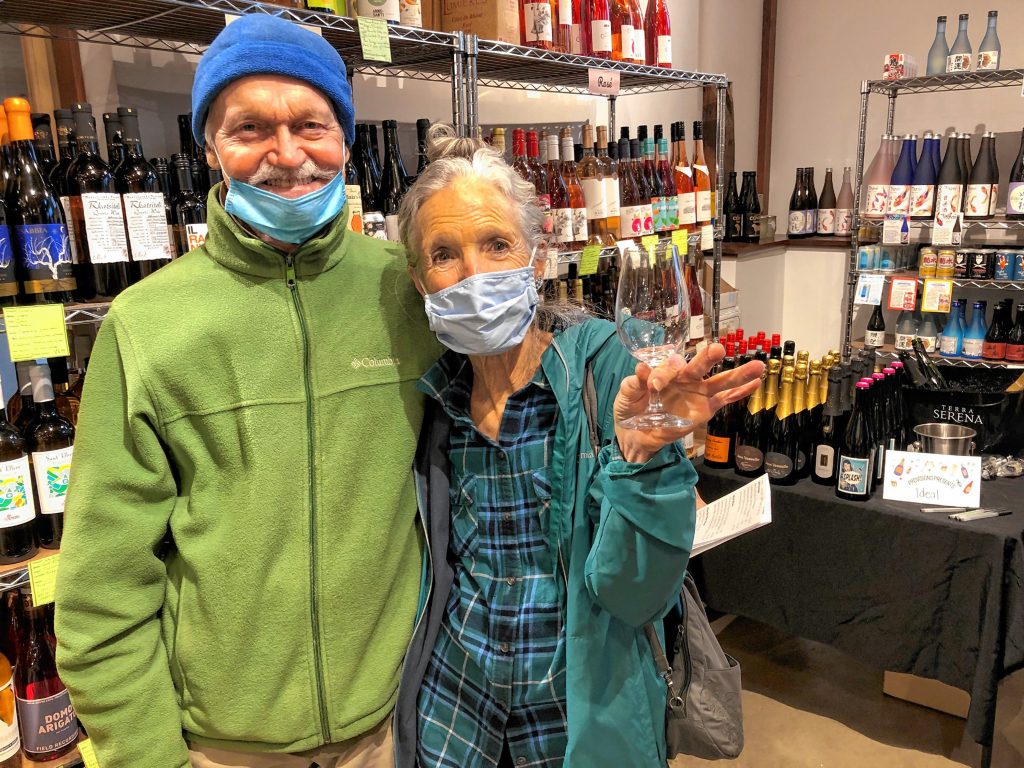 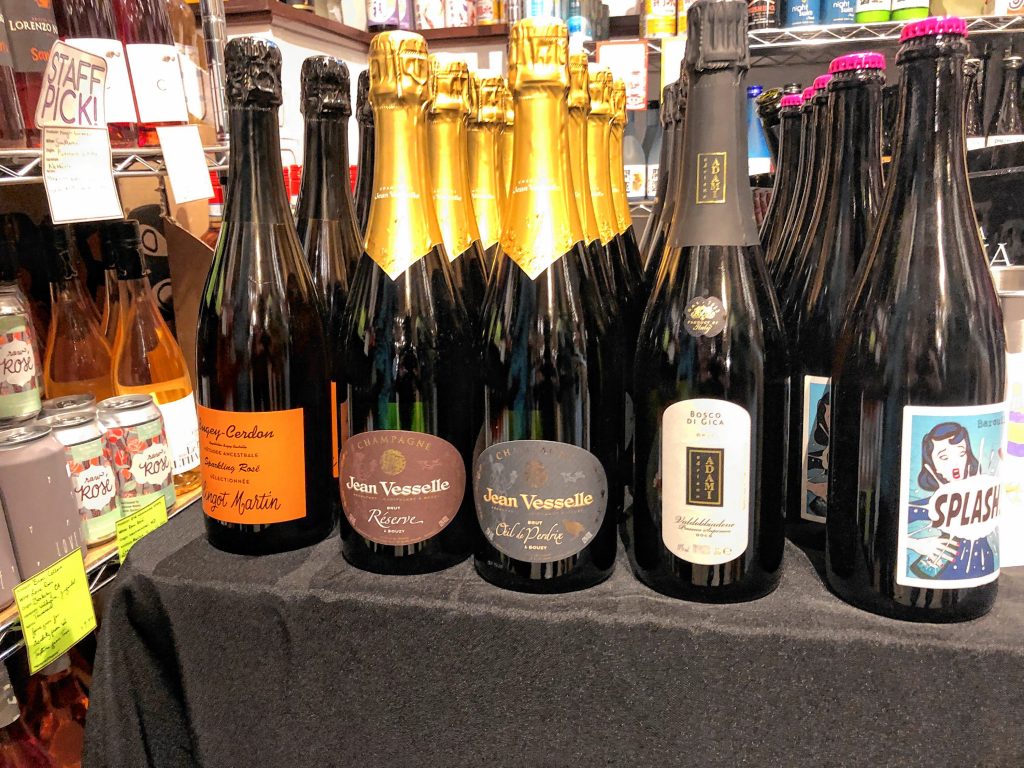 I’m pretty sure it was the author/physician/scientist Vikram Paralkar who said it first, but it became a popular meme in the early days of the pandemic: “It’s only Quarantine if it’s in the Quarantine province of France. Otherwise, it’s sparkling isolation.”

In March of 2020, I feared the notion of isolation. I thought I would view it as anything but “sparkling.” And maybe it was pandemic Stockholm syndrome, but I kinda grew to like being at home and not having anywhere to go or anything to do. But perhaps the time of “sparkling isolation” has ended, as I have gone to my first public wine tasting in 21 months. And it was to taste sparkling wine.

Provisions held its Grand Champagne Tasting on Dec. 11 at their new store in North Amherst. The store is more spacious than the downtown Northampton location, thus better suited for social distancing, and a perfect location to try and create a “new normal” when it comes to these types of gatherings. They were checking IDs at the door to make sure all of the visitors were of age. Pretty standard. But they were checking vaccine status, as well. We all wore masks between tables and between sips. And we did our best to comprehend the high-falutin wine lingo spouted from the lips of the people pouring, without the benefit of being able to see their lips.

But other than that, it felt almost … normal. And there were some delicious wines to choose from if you’re going to choose sparkling for New Year’s Eve.

What makes Vikram Paralkar’s early pandemic meme funny is that Champagne is sparkling wine from only and exclusively Champagne, France. Period. The end. Stop calling other sparkling wines Champagne. I try not to be judgy when it comes to wine stuff. But please try and do this for me, OK? Thank you.

The Provisions Grand Champagne Tasting was loaded with great champagnes, but was also well supplied with delicious, decadent and downright weird sparkling wines from other categories, as well.

I tried some fun sparkling Italian wines poured by Nick Mucci from Mucci Imports. There was a Manaresi Pignoletto Frizzante for $19.99. “Frizzante” means lightly sparkling and is often associated with another popular category of sparkling wine — Prosecco. Nick described this wine as “Prosecco’s nemesis,” and showed us where the rivalry plays out using the map of Italy he had on display. I was impressed by how bubbly this supposedly lightly sparkling wine felt. It was much more interesting than the majority of Prosecco I’ve had.

But he did have an actual Prosecco that gave its nemesis a run for the same money — Malibran Sottoriva Prosecco “Pét-Nat.” Old school wine snobs hate this very trendy wine style. Short for “Pétillant-Naturel,” it basically means letting the natural yeasts do their thing to make the liquid extra bubbly without using any other forms of intervention. It can make the wine taste wild. And it’s questionable bottle-to-bottle how stable these wines stay on the shelf.

I’m sure Italian wine snobs hate the term “Pét-Nat” even more when applied to Italian wines because it’s virtually the same idea as their “metodo ancestrale,” which sounds so much less French. I have no problem with the style, and it made for a much more interesting Prosecco than I am usually exposed to. It was also $19. For $3 cheaper there was a Flora Col di Luna “Pét-Nat” (good grief) Prosecco from Hangtime Wines that might really appeal to the traditional Champagne fan. So bready on the nose. Lighter bubbles. And with a touch of sweetness. I like my wines dry but sometimes even I give in to the sweeter stuff.

Other not-Champagne sparkling wines that piqued my interest were the Ambriel Classic Cuvée from England. ENGLAND?!? Winston Churchill was famous for drinking champagne every day, and even purportedly said “Remember, gentlemen, it’s not just France we are fighting for, it’s champagne!” So the Brits are into that shit. But, I have to admit, those colonizing bastards have been making some pretty great sparkling wines, as of late. Not sure if I’m ready to pay $40 a bottle for it. But it tasted great for free!

Then there was the Big Flower Sparkling Cabernet Franc Pét-Nat from South Africa. (Again sorry, old school wine snobs. But these Provisions kids love it.) It was one of the weirder experiences wafting from a glass that I’ve had. On first whiff, it smelled like hot sauce. Then a sip. And then the smell changed to something like cilantro and/or soap. You know how some people hate cilantro because it tastes like soap to them? Imagine smelling both those things.

It tasted totally fine. Lovely, actually. But wow. WEIRD. That’s what I love about wine. It was a little pricey for an experiment, at $24.99. But if you’ve got the money, why the hell not?

Now to France. But not yet to Champagne. Two familiar faces who had come to the tasting were Frank Demaree and Ellie Cook. “I like Pét-Nat more than Frank does,” Ellie said. The debate even divides households. These two were most impressed with the wines from Vineyard Road Wine Imports.

“Standouts have been the Champagney things,” Ellie said.

“The Crémant, a lot of them taste just as good as Champagne,” Frank said, “You get that smell…it’s the same smell.”

Crémant are sparkling wines from the not-Champagne parts of France. And Vineyard Road’s Crémants were delicious. The smell Frank was referring to manifests itself to me as baking bread, yeast or Crème brûlée. These Crémants were both from Jura between Burgundy and Switzerland. The nice thing about a lot of Crémant is they are often on par with Champagne but cheaper. And these two, while not cheap, met that description. The Champ Divin Crémant du Jura at $27.99 and the Tissot Crémant du Jura Rosé at $31.99 were fantastic.

But Provisions called their event “The Grand Champagne Tasting.” And I tasted ALL the grand champagnes. Well, all of the ones that were available. Turns out, there were two tasting sessions that day. I only had time for Session One. I can’t drink all day. But Provisions owner Benson Hyde tried to cajole me to stay a little longer to make sure to taste the Perseval Farge Champagnes and the Vilmart Champagnes. I was very tempted. Next time!

What I did try, and did love, were the Jean Vesselle Champagnes poured by the sexiest wine rep alive, Franck Seguin from Ideal Wines. I particularly liked the Jean Vesselle Oeil de Perdrix, or “Eye of The Partridge.” Given that name for its salmon color, it was exactly the style of Champagne that I’m looking for. And at a very fair $50. You can find Champagne for cheaper, and you can definitely find sparkling wine for cheaper. But remember what Churchill said about Champagne? The guy killed Nazis for this stuff. Among other reasons.

My favorite champagne at the Grand Tasting was back at the Vineyard Road table. The Rosé d’assemblage Brut Champagne from Christophe Mignon. It was a Champagne made from 100% Pinot Meunier. You’ve heard of Chardonnay. You’ve heard of Pinot Noir. One or the other or both of those grapes make up the lion’s share of Champagne. If you see “Blanc de Blanc” on the bottle (white from white) it’s an all-Chardonnay Champagne. If you see “Blanc de Noir” on the bottle (white from black) it’s a light colored Champagne made of all Pinot Noir and/or Pinot Meunier. Both red grapes. Pinot Menuiner is often blended in small percentages to Champagne. But I’ve never had a 100% Pinot Meunier Champagne.

It’s first-time experiences like this that excite me. And man, this wine excited me. As fate would have it, it was also the most expensive wine at the first session. $75. This is one of the perils of wine snobbery.

But drinking the expensive shit for free at tastings might be the best part of ending sparkling isolation. Not knowing what COVID has in store for us in 2022, if you can’t find a tasting to go to for free, you might want to splurge this New Year’s Eve. Remember, it’s only Quarantine when it comes from the Quarantine province of France.