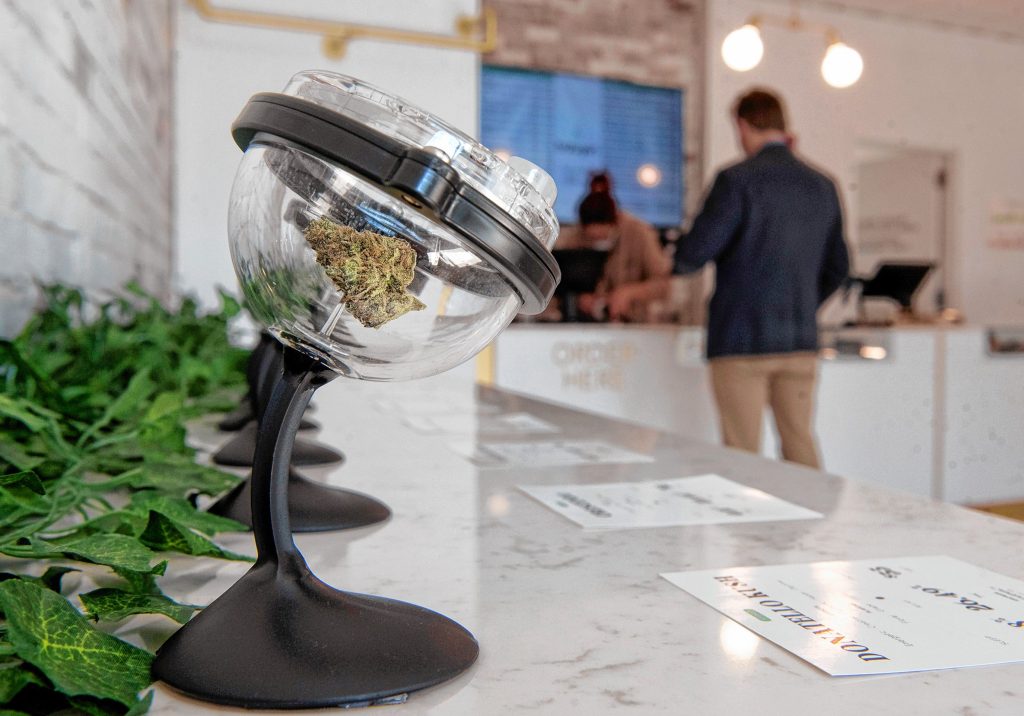 A variety of bud named Donnatello Kush, from Montague grower 253 Farmacy, is one of 15 displayed under magnifying glasses on the “bud bar” at Balagan Cannabis during the Northampton dispensary’s first day of business on Thursday, Oct. 14, 2021.

BOSTON — Recreational marijuana sales soared in 2021 as Massachusetts emerged from the pandemic, at the same time that business complications have restrained growth in the industry.

Massachusetts legalized marijuana in 2016, becoming the seventh state to do so. However, because the state only licensed sales in 2018, the industry has gotten off to a slow start here.

“Right out of the gate the Legislature delayed everything by six months to rewrite the initiatives,” said Jim Borghesani, the communications director of “Yes on 4” in 2016. Massachusetts was the only state to rewrite the law passed by voters on marijuana legalization.

“There’s just been a slower licensing process by the CCC (Cannabis Control Commission) than in other states, and for no good reason,” Borghesani said.

The industry then hit major setbacks during the pandemic, such as the inclusion of cannabis retailers in Gov. Charlie Baker’s list of nonessential business closures in 2020. This upset many in the industry who were angry that they were forced to close when liquor stores were not.

“We should be treated exactly like a package store,” said public policy law attorney Jim Smith who frequently represents cannabis clients. “In fact, our product is far less dangerous, far healthier, and less addictive than alcohol. It’s a clear double standard,” he said.

The closure of these establishments gave the illicit market a lifeline in the state when a main goal of the CCC and marijuana legalization was to close these markets and create legal consumers.

“Legal products are tested and safe — no one knows what’s on those street corners,” said Smith, “but with that being said there’s some growth still in there,” in turning the illicit market over into a legal one.

Zoning issues have also been an issue for marijuana license applicants in the state. For one, there cannot be a dispensary within 500 feet of a school. The intended location must also comply with local municipal ordinances on marijuana establishments in their community. The establishments must also abide by host community agreements, which can include a community impact fee of up to 3% of gross sales.

Once an applicant has found a location, only then can they start applying for permits. The process must go through the city or town and then they must adhere to the host community agreement with the local select board or city council.

Once the host community agreement is set up, applicants can go to the CCC to officially start the process of becoming a licensed establishment. According to both Borghesani and Smith some applicants have to wait up to 18 months before they are able to obtain their license, meaning applicants may be paying rent that entire time before even beginning to make a profit.

“At this point, you would have to spend anywhere from $1.5 to $2 million just to open a simple retail store without a cultivation license,” Smith said.

The Social Equity Program is one initiative to help would-be entrepreneurs cope with these issues, which was created by the CCC in 2018. The program “creates sustainable pathways into the cannabis industry for individuals most impacted by the War on Drugs, marijuana prohibition, disproportionate arrest, and incarceration.”

“It all comes down to access to capital — there are carrying costs, consultant costs. You can’t go to a bank and get a loan for any of this,” says Borghesani, who’s seen Social Equity Program applicants struggle first-hand.

Many applicants are still making their way through the process as the CCC continues to review more applicants.

With sales already up, the state’s marijuana sales projections are looking exponential over the next few years. Despite the pandemic negatively affecting other businesses around the state, the cannabis industry has still grown during the pandemic.

According to the Marijuana Policy Project, retail cannabis sales in the state exceeded $2.28 billion in 2021.

The sales prove that the demand is here in Massachusetts for legal marijuana, but meeting that demand has been a long road. There is a limit on how much product consumers can purchase at legal establishments due to the lack of supply.

“Supply is just finally starting to meet demand,” said Borghesani, a positive sign for the industry, even if the state is slower than others throughout the process.

Roesli Arena writes for the Gazette from the Boston University Statehouse Program.