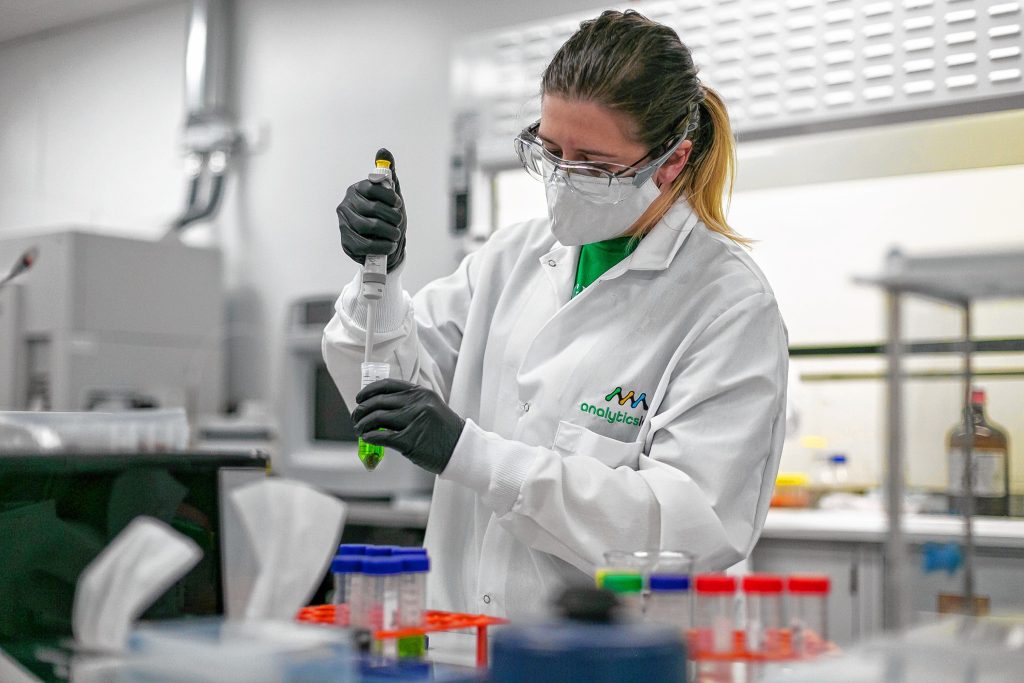 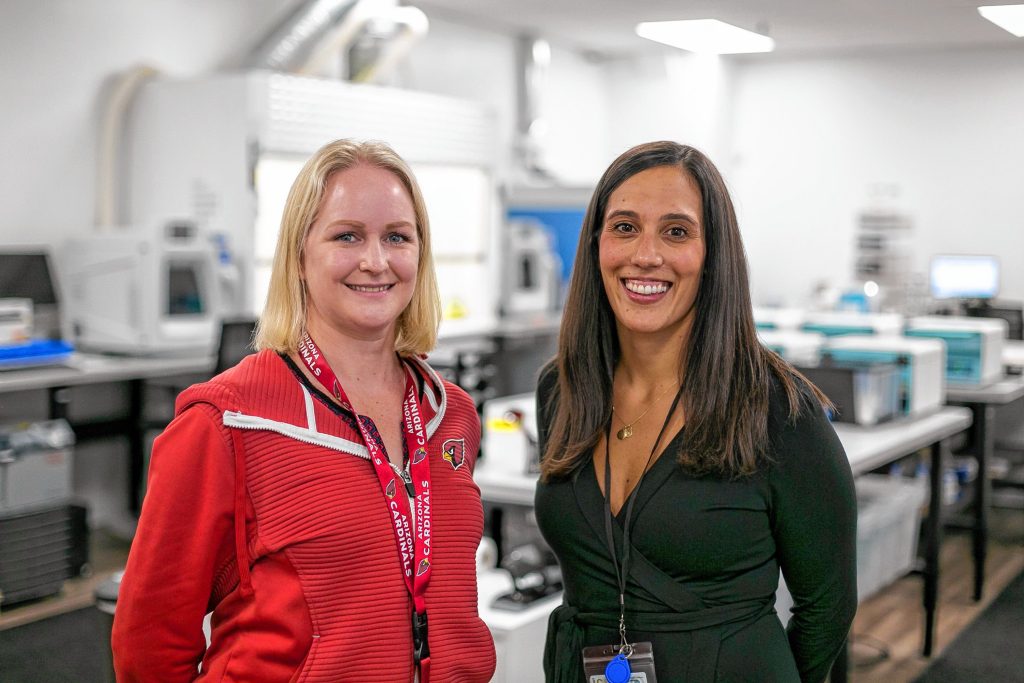 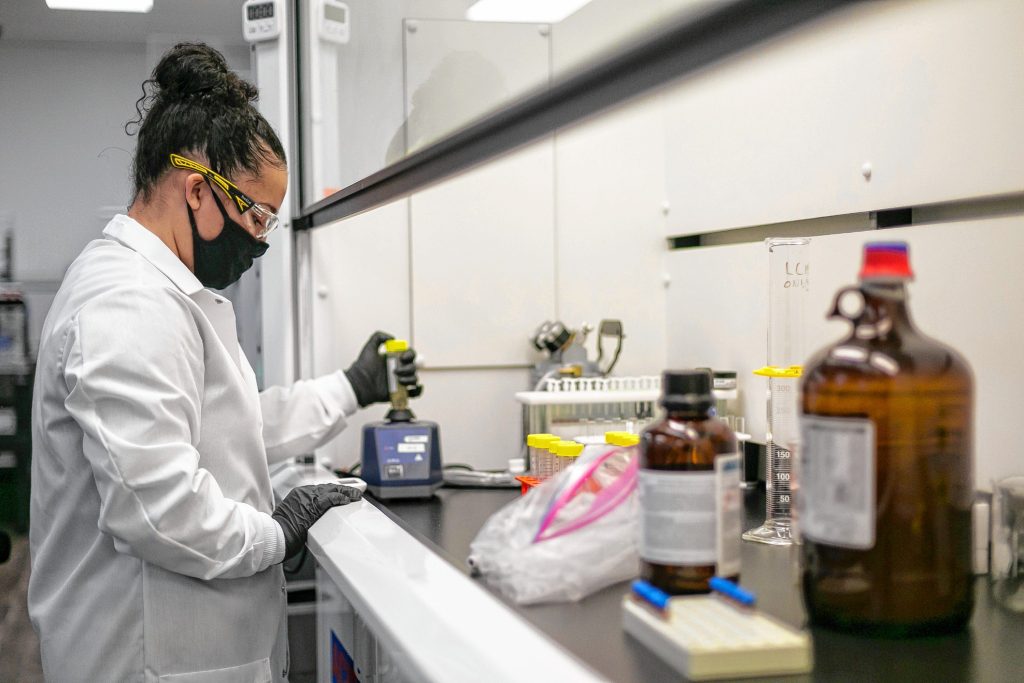 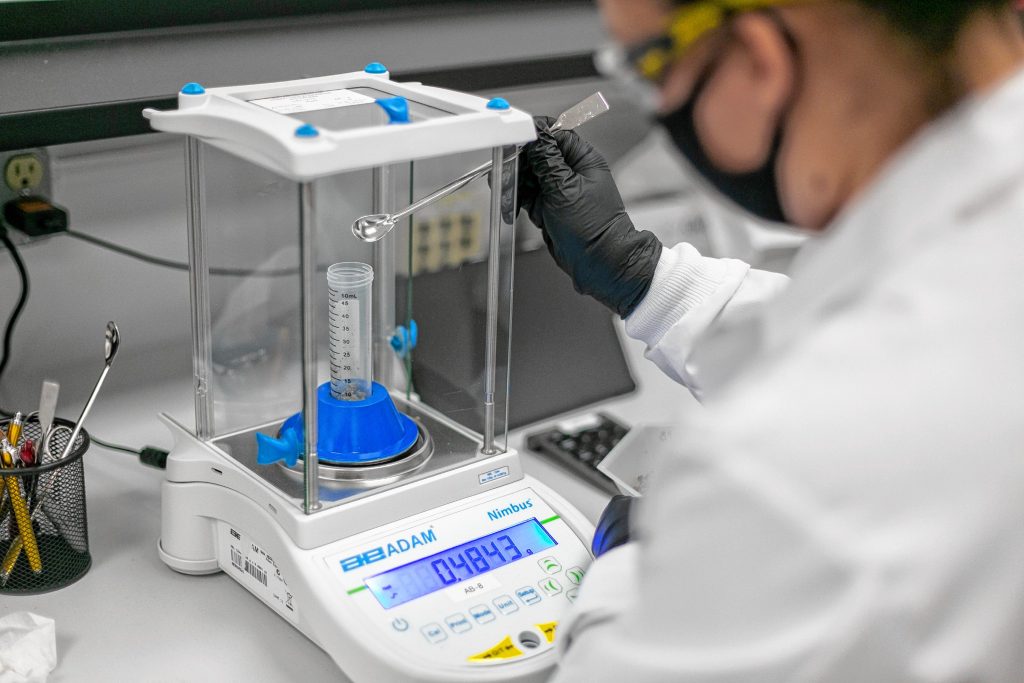 Analytics Labs pesticide lab analyst Danica Mondon-Poirier of Springfield weighs a sample of marijuana flower to determine its water content, one of the first steps to testing the chemical composition of cannabis, at the Analytics Labs testing facility in Holyoke. 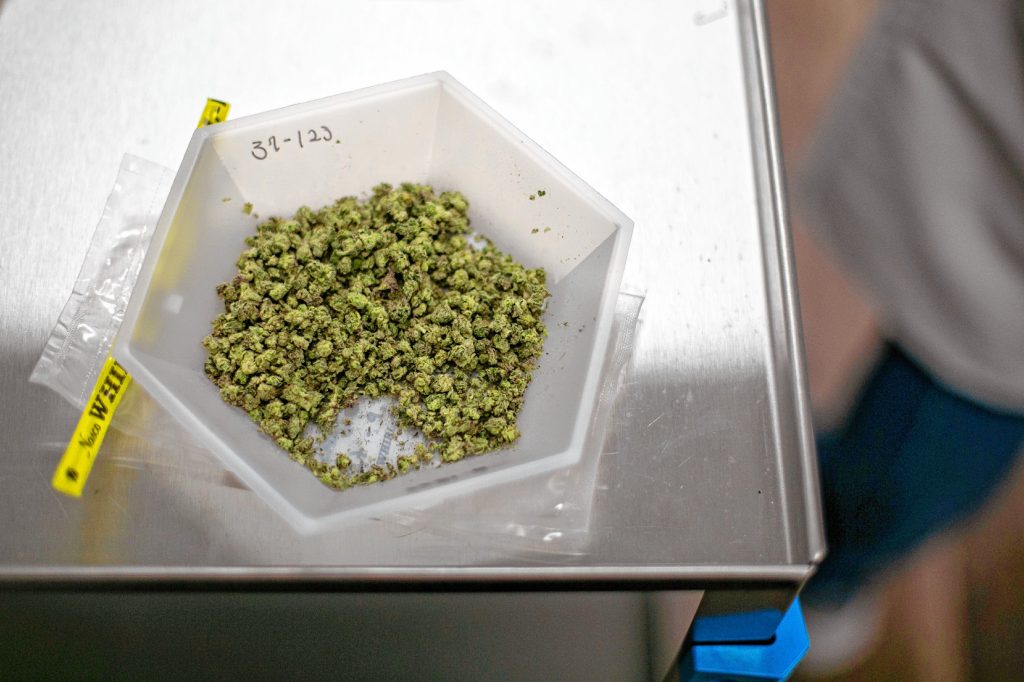 As an independent cannabis testing facility, the Analytics Lab takes special precautions to anonymize each marijuana flower sample they test at their location in Holyoke. 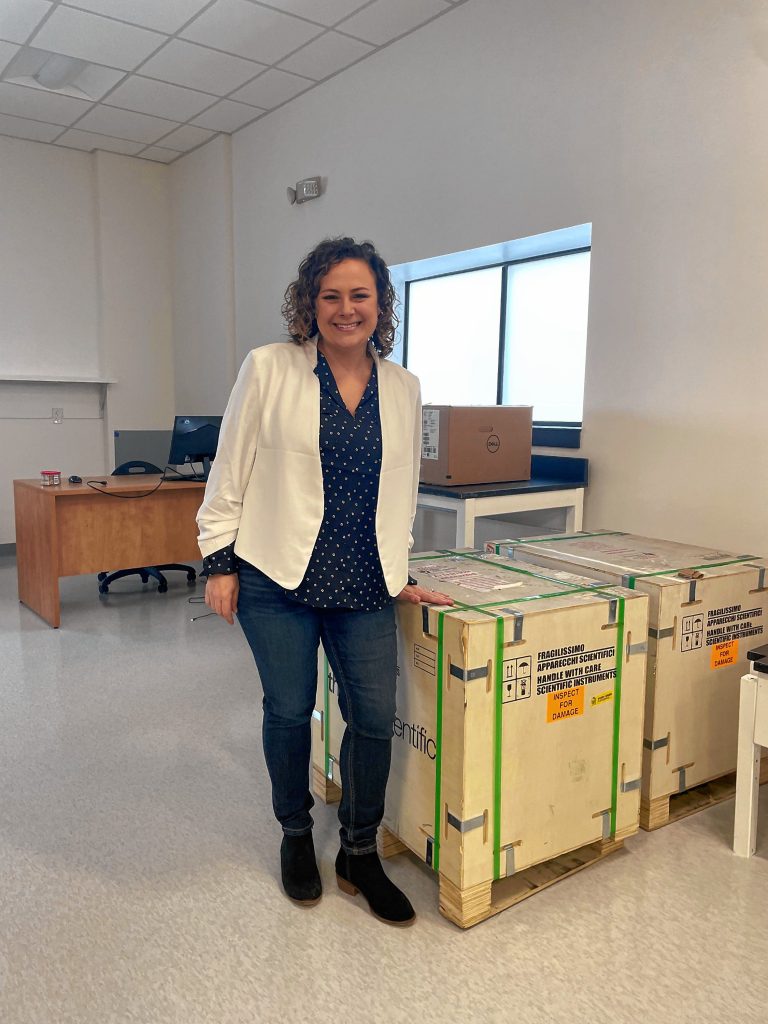 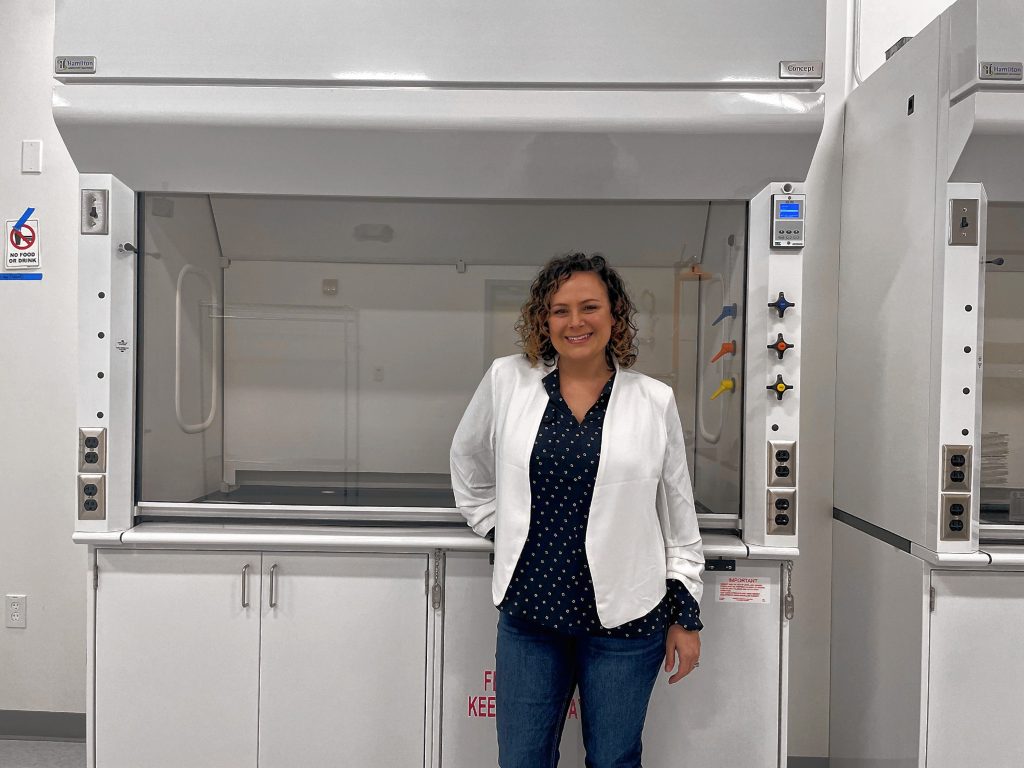 Megan Dobro is gearing up to launch the region’s second testing facility, SafeTiva Labs, in Westfield.

But the work that Analytics Labs does inside its Appleton Street laboratory in Holyoke is actually quite simple to explain. The business plays an important role in the state’s marijuana industry.

“We are the niche to make sure the cannabis is safe for public consumption,” said Brenda Shalloo, the company’s chief scientific officer. “Our primary goal is to make sure it’s safe.”

Analytics Labs is the first such testing lab in western Massachusetts — two more are in the works, in Westfield and Deerfield — offering a necessary service for cannabis companies in the area. The state requires such companies to submit their cannabis to independent labs that run nine separate tests for cannabis potency; the aromatic compounds known as terpenes; residual solvents; heavy metals; pesticides; moisture; pathogenic microbes; non-pathogenic microbes; and mycotoxins.

The marijuana industry is booming in Holyoke. The state’s Cannabis Control Commission has approved 50 licenses for retail, cultivation, manufacturing, “microbusinesses” and testing labs that are located in Holyoke — the most in the entire state. The next highest is Worcester with 32 approved applications, followed by Boston with 27.

Cannabis companies have been drawn to the city for its cheap electricity — one of the industry’s biggest expenses, given the massive energy footprint of cultivation facilities — and its location at the intersection of two interstates. City officials also have worked to attract the industry by making the bureaucracy of locating in Holyoke as smooth as possible.

Until Analytics Labs opened last September, however, companies in the western part of the state had to transport batches of marijuana to central or eastern Massachusetts to have the mandatory testing done on their products. Aaron Vega, Holyoke’s director of planning and economic development, said that it was also important to city officials that Analytics Labs is woman- and minority-owned, and that it is locally owned.

“The opportunity was here,” said company President Tiffany Madru, who was raised in Holyoke. “The whole chain is here, but what was missing?”

Shalloo, the chief scientific officer, is an industry veteran. She was originally an Environmental Protection Agency scientist before opening the first independent cannabis testing lab in Arizona. She said she has helped Arizona, Nevada and now Massachusetts mold their safety policies. Hearing her talk about her equipment and testing protocols, her passion for the work is obvious.

During a tour of the lab, Shalloo explained how her team makes sure a batch of cannabis isn’t contaminated by e. coli or salmonella, for example, or whether it meets the state’s strict threshold for the presence of pesticides. She consistently returned to the same theme throughout the tour.

Tests are done on 10-gram samples taken from batches weighing 15 pounds. There are strict state-mandated protocols about the way those samples pass through a chain of custody, and the state also requires labs to submit financial disclosures to ensure that they are truly independent of cannabis companies, whose names are removed from the samples labs take in.

Vega said the growing industry is part of the city’s revitalization plan.

For Madru, that was an important part of the ability to locate the business in Holyoke, too. She said she hopes the industry can help revitalize downtown, bringing with it other jobs and businesses.

“As someone who grew up in Holyoke, that’s big,” she said.

Not far away in Westfield, Megan Dobro is gearing up to launch the region’s second testing facility, SafeTiva Labs.

The biology professor, who is on a leave of absence from Hampshire College, is familiar with the process, having previously served as a consultant for another company looking to open a testing facility in the region. That project did not happen, but it was through this work that Dobro recognized the exploding demand for cannabis testing in the state and became motivated to open her own facility.

Two years later, she’s in the final stages of planning SafeTiva’s opening at 109 Apremont Way, the site of the former Berkshire Industries. Dobro says SafeTiva will serve all of western Mass.

In addition to meeting the state requirements involved in testing the marijuana products that will eventually make their way into the shelves of dispensaries, Dobro also thinks new technology in the soon-to-open lab will give SafeTiva the ability to test product more efficiently, without compromising accuracy.

“We have some technology we aren’t ready to announce yet, but we’re really excited about some things that we’re sitting on that’s going to change testing in Massachusetts,” Dobro said.

Dobro’s says SafeTiva will also act as a consultant to help cannabis producers understand products test results, and how they can improve their product.

“We want to be a reliable partner for producers to create better products and we designed our lab to achieve faster turnaround times, be really user-friendly, create a wonderful experience for our customers and coach them about what their testing results mean about their product over time so they can grow their business.” Dobro said.

The lab is now in its final stages of licensing and certification. Dobro described their current team of eight as their strongest asset.

“We have a group of people who are really expert in cannabis testing, and they’re also really good humans who care about doing things the right way and helping our customers as much as possible” Dobro said.

Once in full operation, the lab will staff 35 employees per shift. SafeTiva is currently hiring for all positions, from lab techs to administrative positions. Dobro is committed to building a diverse team of individuals carrying a mutual passion for cannabis, and safe consumption of the product.

“We have been very fortunate to have a really supportive team who has each other’s back throughout all these crazy times,” she says. “I’m not doing this alone.”

Meanwhile, in Deerfield, Confidence Analytics, of Redmond, Washington, is proposing what would be a third facility in the region to perform third-party testing of marijuana products before they hit the market. The facility would be located in a laboratory on SunnyDayzCannabis’ proposed campus across from Tree House Brewing on Routes 5 and 10.

CEO Nick Mosely told the Deerfield Select Board in January that the dearth of testing labs is creating a strain on the supply chain.

“I do know that statewide there is a shortage of laboratories,” Mosely said. “It represents a bottleneck in the supply chain and we’re looking to widen that.”

Mosely said the lab would bring about 20 to 30 jobs to Deerfield. “We would seek to hire local talent,” Mosely said. “(And) develop experienced chemists and microbiologists here in Deerfield.”

Mosely noted that Confidence Analytics’ facility in Washington has performed more than 1 million tests on 200,000 individual samples and wants to bring its expertise to the Valley.