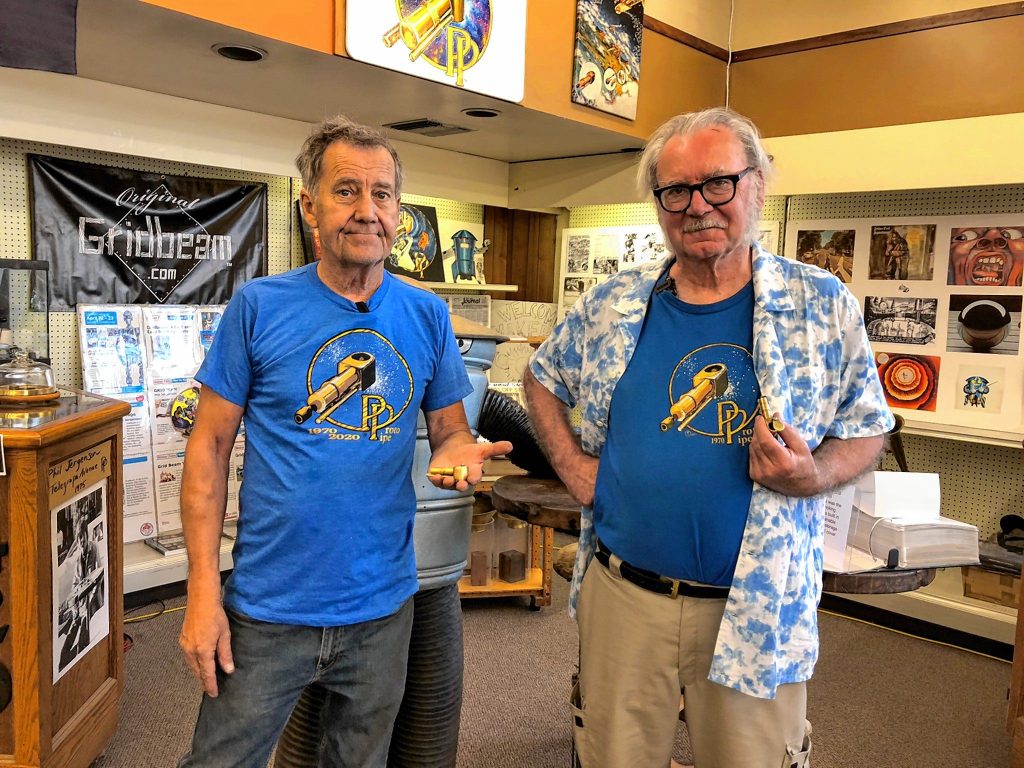 LOS ANGELES — If you invent something that becomes known as the Swiss Army knife of pot pipes, a virtually indestructible, highly designed 4 ounces of brass called the Proto Pipe that sells more than 1.5 million units to generations of stoners, you’d expect the world to beat a path to your door. (You know, that whole “build a better mousetrap” thing.) So why was I the only one who’d found my way to the doorstep of a dusty industrial park just off the main drag in Willits, California?

I made the trek to the town of about 4,900 that’s three hours north of San Francisco — a pilgrimage, really — for two reasons.

1. I felt compelled to shake the hand of the man behind this practically perfect pot pipe that’s been my go-to piece of paraphernalia nearly my entire cannabis-consuming life.

Why, with an origin story forged in the crucible of this country’s counterculture and 51 years in business (almost unheard of in the modern cannabis space), do so few people know about the Proto Pipe and its creator, Phil Jergenson?

The specifics of how I came to own one of the best pot pipes ever made are now lost to the smoking gods, but it was definitely in the mid-1980s in the early years of my smoking career. And I most likely came across this gleaming treasure at Emerald City of Oz, a waterbed store and head shop in Burlington, Vermont, famed for its bright green facade and the pair of winged monkeys perched on the roof. I’ve had the pipe in my possession ever since.

Not so much a pipe as a smoking gadget, the Proto Pipe is a palm-size tool for the working man that’s somehow futuristic and old-school all at once. The bowl, which is hand-drilled out of solid brass, has a permanent five-hole screen and a teardrop-shaped lid that swivels closed to snuff a lit bowl and keep the contents secure. A 2-inch brass tube does double duty; the open end is the mouth of a stash pod that holds five bowls of herb, and the closed end is a bowl tamper. A notch in the lip of the pod allows it to twist-connect to the side of the bowl, where it’s held in place by a slender poker.

The poker plays multiple roles too. Its ultra-hard steel tip can be used to clean the permanent screen and push the resin trap out of the bottom of the bowl for a deep cleaning. The other end is designed to clean the pipe stem.

That functionality has earned the Proto Pipe a well-deserved reputation as the Swiss Army knife of paraphernalia, but, in many ways, it’s also the Levi Strauss of cannabis. It’s a legacy brand that has roots in — and an authentic connection to — the earliest years of America’s great weed awakening of the 1970s. That’s a rarity shared by only a few others in the space today, including stoner comedians Cheech and Chong (1971) and High Times magazine (1974). The difference, though, is that while the comedy duo and the pot publication are familiar to today’s cannabis community and beyond, the Proto Pipe is decidedly not, which I find confounding.

More accurately I found confounding until I trekked to Willits and sat down with Jergenson and his brother Richard (the company historian and archivist) at the latter’s Cannabis Culture Museum and Archive.

My visit was the culmination of a nearly four-year on-again, off-again search for answers. My curiosity was first piqued in 2017 when I took to the internet to see where I could buy one as a gift. A cursory search turned up no company website. A check of Amazon yielded a handful of knockoff pipes that might have passed for the real deal but for the lack of the interlocking letter P logo (inspired by the Rolls-Royce logo) stamped on the swiveled bowl lid.

However, while turning the cool piece of brass over and over in my hand like Aladdin rubbing his magic lamp, I realized the pipe itself might hold a clue. I removed the poker, rotated the storage pod and pulled it away from the side of the bowl. Inside the indentation, stamped into the brass, was a mailing address for a post office box in Willits. It was one of those thoughtful design flourishes I must’ve seen a hundred times and never given a second thought.

That additional crumb of information helped me find a phone number. After what seemed an eternal number of rings, someone picked up the phone. After a brief conversation, I hung up comforted by the fact that the brand was still a going concern. I also hung up perplexed by the fact that in the second decade of the 21st century the only way I could buy one was to mail a check (really!) to Willits and wait patiently (about 10 weeks) for it to arrive in the mail.

At the time I shrugged it off, thinking it was either an authentically old-school way of doing business or, more cynically, a calculated, aging-hippie branding play. A year later I went searching again, hoping to include the Proto Pipe in a holiday-season cannabis gift guide for The Times, and came up empty. Intrigued — make that mystified — I’d scour the interwebs every six months or so, looking for some sign that my beloved pipe brand had found an onramp to the information superhighway. Finally, in November of 2020, I hit pay dirt. Fifty years after officially launching, the Proto Pipe had an official website.

I immediately clicked the contact button. By the day after Thanksgiving, I had begun a conversation with Richard that continued for the better part of nine months, culminating in my visit last fall. What the Jergensons told me was a tale filled with more ups ands downs than an M.C. Escher staircase. The short version goes something like this:

In Denver in 1968, shortly after he had been introduced to marijuana, Phil had an idea. “I think maybe my eureka moment was on a ski lift and I was trying to light a pipe that I had made out of cardboard, and the lid to an old film tin [as] the bowl,” he said. “And I just realized I didn’t have any of the implements that you needed. That’s when I decided I was going to design a pipe.” He explained that most pipes at that time were either carved from wood or stone or were screwed-together metal lamp parts. He envisioned something more gadget-like — this was at a time when the space race was in full swing and James Bond was in movie theaters — that had a removable poker, a place to stow some weed and a permanent screen, and it could be easily cleaned.

The self-taught machinist started tinkering, and about a year — and half a dozen iterations — later, he had the Contrivance, a forerunner of today’s Proto Pipe, and he decided to move to San Francisco. “The Whole Earth Catalog had just come out. I’d just read [about] Ken Kesey in ‘The Electric Kool-Aid Acid Test,’ and I thought I was ready for California,” he said about 1970.

“I followed him in 1971 to help him launch his pipe dream,” Richard said. “San Francisco was the epicenter for the growing youth movement, and to me, cannabis seemed to be the glue that helped hold the movement together.”

From the outset, that pipe dream seemed perpetually in danger of going down the tubes. There were challenges scaling up, day jobs to be worked and knockoffs to sabotage. In June 1972, the brothers took a gamble that changed everything. They scrounged together $120 and placed a 2-inch by one-column advertisement in then five-year-old, San Francisco-based magazine Rolling Stone. A few months later, Phil was off working on a carpentry gig in Southern California when he got a phone call informing him that his post office box was stuffed with orders. Within a year, sales were brisk enough that Phil and Richard felt they could focus on their pipe dream. A brand was born.

Thanks to more ads in counterculture magazines, artwork by underground comics artist Larry Todd (best known for his Dr. Atomic character) and a retail presence in record shops and waterbed stores, the brand thrived. In 1976, the design was tweaked slightly and the name was changed (someone mangled the words “prototype pipe”) to fend off a business partner-turned-competitor.

In the mid-1980s, around the same time I was discovering the Proto Pipe on the opposite side of the country, the Jergensons were discovering that the world around them was changing. The Reagan-era war on drugs was in full swing, and Phil was convinced his phone was being tapped. They decided to temporarily entrust their pipe dream to someone else. In 1987, they sold the business to a friend with the agreement that if and when cannabis became legal at the federal level, they’d have the opportunity to buy it back.

While the new owner — the same person I’d spoken to on the phone in 2017 — continued to make Proto Pipes for the next three decades, the Jergensons said that was about it.

At the dawn of the internet era, a brand whose early success was buoyed by a robust presence in counterculture magazines — or the World Wide Web of the 1970s — was nowhere to be found while knockoff versions proliferated.

As the pendulum of public opinion swung back in favor of cannabis in California and elsewhere, the Jergensons hoped to once again play a role in the future of the Proto Pipe, but the relationship with their former friend had soured to the point that, in 2015, Phil decided to launch a competing product called the Mendo Pipe (since rebranded as the Proto Rocket). Then, in 2018, the Jergensons serendipitously found themselves back in control of the Proto Pipe brand 30 years after handing it over. They immediately set about rebuilding it from the ground up, one machine at a time.

Another goal is to make sure people looking for the Proto Pipe online find the real deal. For that, Phil turned to his 27-year-old daughter, Rona Jergenson, tasking her with building out the website and e-commerce platform (protopipellc.com). “She put together a great shopping site,” Phil said. “We went from being exclusively wholesale to now most of our sales are retail.” Last year, they sold $179,000 worth of the pipes that retail for $89.95 apiece, Phil said. When I visited, he was bullish on 2021. “We’re up at least 50%,” he said. “We could even double it this year.”

With a half-century-plus in the rearview mirror, I asked the brothers what the Proto Pipe business might look like in another 50 years.

“The first 50 years have been quite a tumultuous ride,” Richard said. “So I don’t know what the future’s going to look like.”

I won’t pretend I can divine the future with much clarity either. However, I do know one thing: Even if the Jergensons decided to shutter their factory tomorrow, 2071 would still be full of Proto Pipes, each one not just a smoking vessel but a sacred object, a smooth brass talisman and a 3-inch-long time machine that will forever be set to 1970.