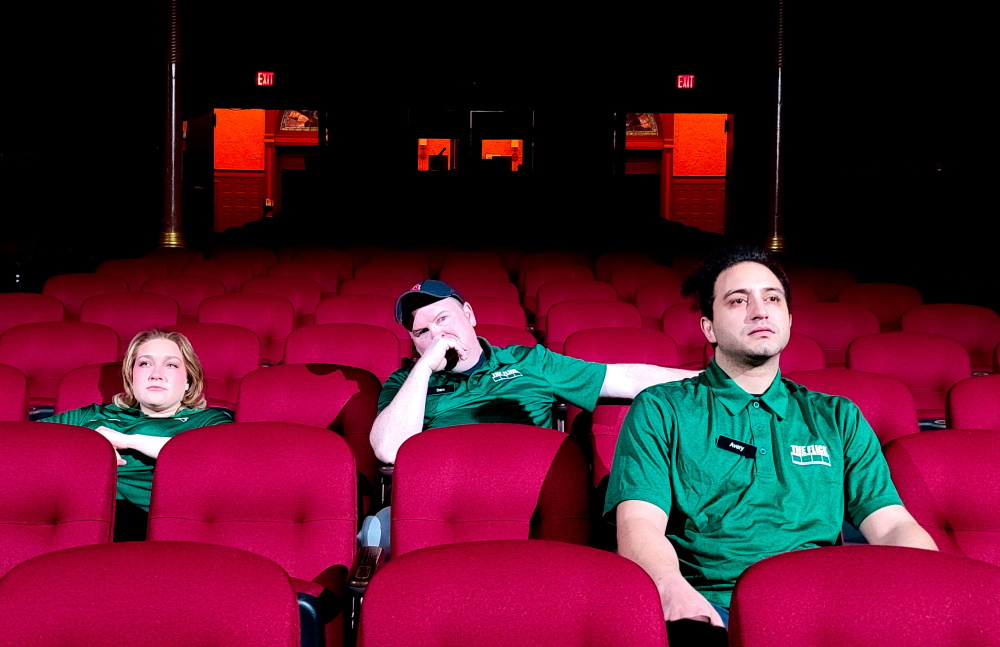 If you were in the Valley in the Nineties or before, you probably remember the old Amherst Cinema, in the Amity Street building that now fronts the new Amherst Cinema. If you were ever inside, you’ll remember it as a shabby, downtrodden place where, according to the cinema’s own history, “a lack of basic maintenance eventually allowed the building to deteriorate … and the building was closed periodically due to safety and health code violations.” After struggling for years with a dwindling audience, the theater shut down for good in 1999.

The program for The Flick, which plays at the Academy of Music this weekend, says it takes place in a movie theater “in central Massachusetts.” But it’s generally agreed – around here, anyway – that the play is really set in the old Amherst Cinema. The playwright, Annie Baker, grew up in Amherst; she was a teenager in the theater’s last days and lived a couple of blocks away. The fleapit in which her three characters work could well be that rundown cinema in the twilight of 35mm film, when digital projection and multiplexes were sweeping the old movie houses away like spilled popcorn.

Indeed, a lot of what happens in The Flick involves sweeping. The characters are the theater’s weekend crew – three young people in a dead-end job, cleaning up after the last show, passing the time debating the merits of classic films and bitching about the patrons who spill not only their popcorn but their sticky drinks and worse. Over three-hours of seemingly repetitive episodes, their desultory conversations coalesce into edgy relationships that, as one critic put it, “are more gripping than the second-run movies on the screen.”

Baker, who won an Obie and a Pulitzer for the play, has said she conceived it as “a face-off between a theater audience and a movie-theater audience.” In her stage directions, the set is the theater itself, with seats facing the audience and a projection booth at the back, so that the theatrical fourth wall is, in effect, the movie screen.

The Academy’s production goes that one better. Rather than sitting in the theater looking at a stage set up to look like a theater, we’ll be sitting on the stage looking into the theater. The action takes place in the theater’s aisles, rows of seats, even the projection booth way, way up at the back of the balcony.

Last week I attended a rehearsal of The Flick, which has been on producer Debra J’Anthony’s to-do list for a couple of years. I sat at the edge of the proscenium apron with director Linda McInerney and stage manager Nikki Beck, looking out on the 800-seat “stage” as the three actors moved through their scenes.

It was not only cool, it was mesmerizing.

The mesh of theater and cinema running through the piece is amplified in this venue. It’s a vast space, and they use all of it. Sometimes, as I watched, that broad, high, deep vista, expanding beyond my peripheral vision, felt like Cinerama of old (now imax) –– but I was also able to focus in on the individual performers creating intimate moments out of seemingly aimless exchanges.

McInerney told me the play “reminds me so much of Chekhov – miscommunications happen constantly, so much yearning for connection and never quite making it. Add to that the humor, the laugh-while-you-cry kind of humor. And add to that, you’re dealing with these young people who are trying to find their way in a world that really doesn’t offer them a way to have a way, trying to find a life, trying to find meaning, find each other.”

The three characters are, each in their own way, loners, misfits. Sam, the crew chief, resents Rose, the projectionist, because that’s the promotion he thinks he should have had; but he’s also secretly smitten with her though he won’t admit it, even to himself.  Avery is the newbie, awkward in this role but confident of his cinema smarts; he fancies himself a cineaste and aces the Six Degrees of Kevin Bacon rounds he plays with Sam. Wren Gilbert, who plays Rose, says she’s got a bit of “main-character syndrome. She loves attention, but ultimately on her own terms.”

Sam is played by Kevin Tracy, who told me that being told the show would be performed “backwards,” with the audience on the stage, was at first a disappointment. “The very first time I walked into this building I said to myself, ‘I have to work on that stage!’” The crushing of that ambition has been more than offset by the opportunities and challenges of this unique staging, he said.

“It’s interesting to work at filling and inhabiting this space. After a day of trying to figure out what’s upstage, downstage, stage left and right, we just gave up. We’ve been memorizing our blocking by seat and row numbers.”

Marcus Neverson, who plays Avery, said he also experienced the production concept as “kind of a shock.” But now, “Living in this world is really, really fun.” An unexpected benefit, he said, is that while “many productions don’t get the final set until very late in rehearsal, we had it from Day One. So being able to play in the space where it was finally going to come to fruition” actually contributed to the process.

While the two men spend most of their time in the orchestra section, Gilbert, the projectionist, is constantly in and out of her booth. “I skip cardio knowing I’ll be running up and down four flights of stairs for two and half hours!” she said, adding, “I love how flipping the stage gives the actor the ability to ‘return the gaze’ to the viewer.”

Despite the real-life verisimilitude of its setting, this production does require a certain suspension of disbelief. You’ll have to imagine you’re in the old Academy of Music, before the 2015 renovation that gave it new seats and a thoroughgoing facelift, including red carpeting and restored vintage gold trim on the proscenium and balcony façade. And there’s no popcorn.