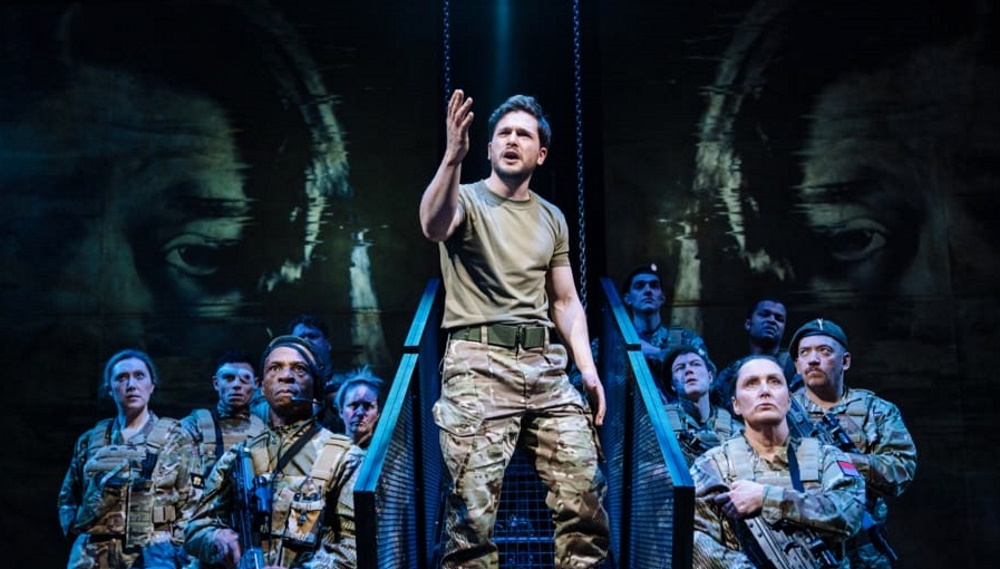 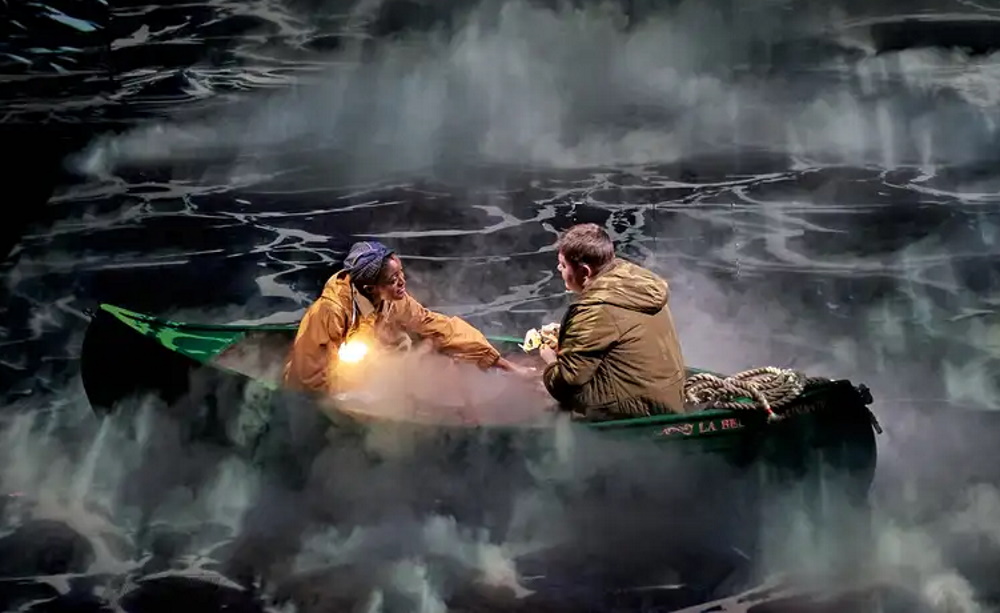 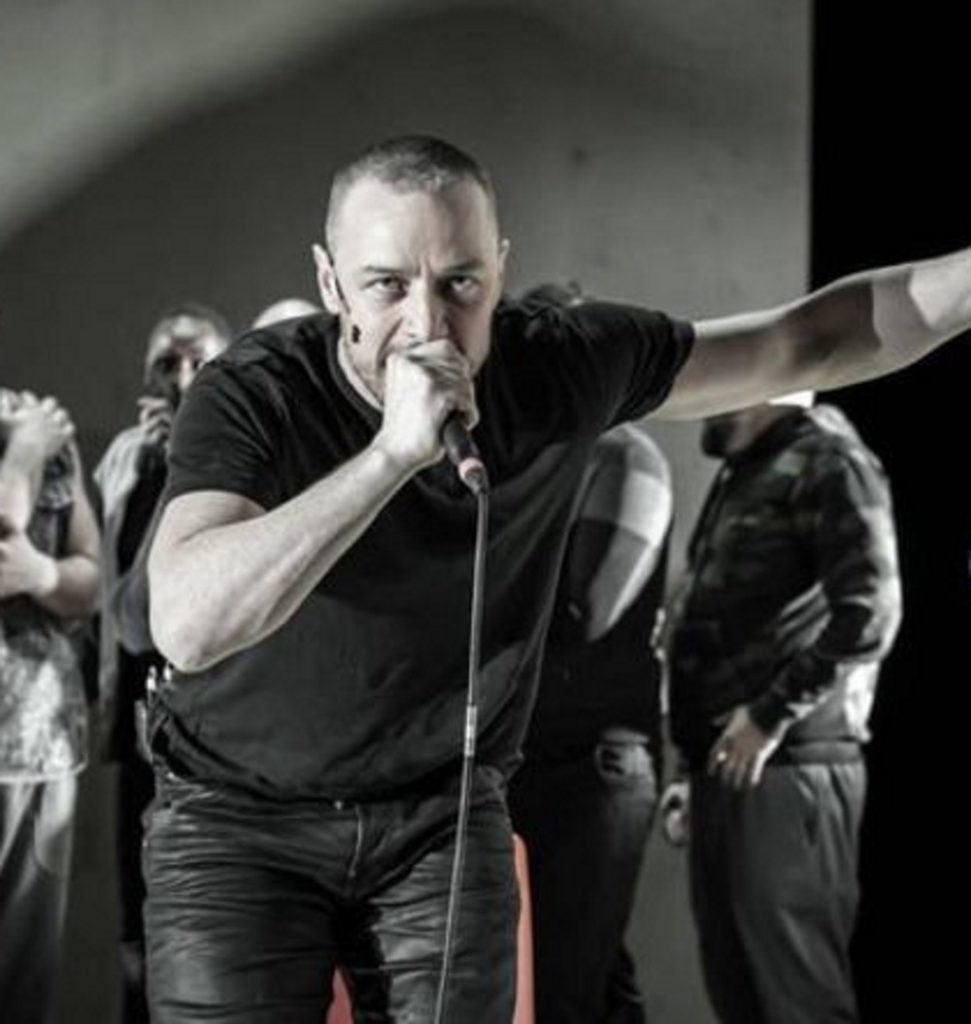 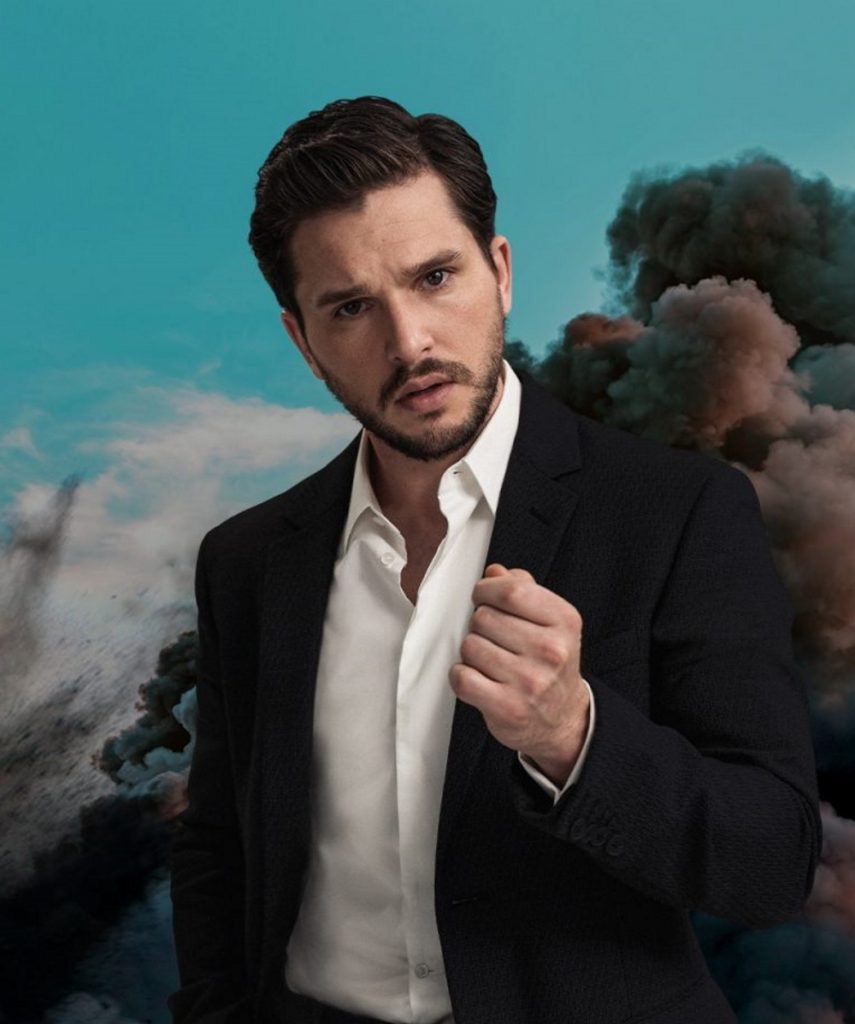 One of the things I’ve missed in the past two years of no-theater, followed by limping-back-theater, is the not-quite theater offered by NT Live. After the worldwide pause, those live-capture performances from the English stage have resumed, and the Amherst Cinema has renewed its subscription.

NT Live, a project of Britain’s Royal National Theatre, brings big-screen, high-definition transmissions of stage performances to audiences in hundreds of cinemas around the world. Launched in 2009, the series has expanded from the National’s own repertoire to include productions by other, often edgier British companies.

As it happens, the first three offerings are in that outlier category, all of them bringing new, sometimes surprising perspectives to recognized classics. 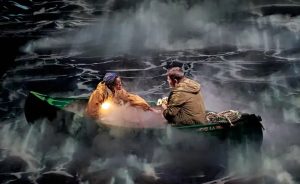 The first, screened earlier this month, was one of the epic all-ages adaptations of classic literary works devised by Nicholas Hytner during his tenure at the National. His first was a dramatization of Philip Pullman’s His Dark Materials, in 2003. Now at the helm of the new Bridge Theatre, he’s come full circle with La Belle Sauvage, a prequel to the Dark Materials trilogy. Here, two plucky youngsters, accompanied by their respective daemons, save the baby who will become the trilogy’s heroine, Lyra, from theocratic tyrants and a biblical-size flood.

The premiere late last year (after an 18-month Covid delay) drew rave-to-mixed reviews from the London press, the Guardian calling it “supremely elegant … vast but never unruly, on a set that dazzles but does not swamp the storytelling.”

If you remember Cyrano de Bergerac as a venerable romance-with-swordplay, you’ll definitely be surprised by this incarnation, a radical deconstruction of Edmund Rostand’s swashbuckling verse tragedy. It opened in London’s West End shortly before all the theaters went dark in 2020, came back briefly this February, and now it’s in a limited run at the Brooklyn Academy of Music – and at the Amherst Cinema (captured at a London performance) May 5 and 21. 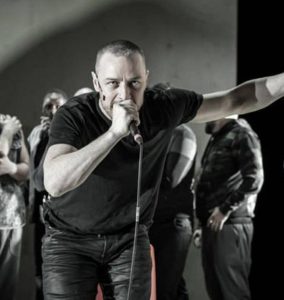 Cyrano is the tale of the swordsman-poet with an eloquent heart and an ugly face who woos the lovely Roxane on behalf of his handsome but tongue-tied young friend Christian. This postmodern makeover, conceived by iconoclastic director Jamie Lloyd, is no costume drama aswirl with capes and plumes. Martin Crimp’s updated version has transmuted Rostand’s elegant couplets into the idioms of the street and the rhythms of rap.

Soutra Gilmour’s set is a white cube whose central element is a microphone stand where some of the dialogue is delivered open-mic style. The swordfights are now rap battles. The concept, the London press agreed, works startlingly well, focusing the drama and celebrating “the dangerous lure of language – its capacity to both enchant and deceive.”

Cyrano is X-Men’s James McAvoy (who also played Lord Asriel in HBO’s 2019 His Dark Materials serial). Here he’s got a black-leather look, a stubbled scalp, and no prosthetic proboscis.

A king in the making

Henry V, from London’s Donmar Warehouse, is also given a present-day treatment, with soldiers in fatigues armed with automatic weapons. Which makes parallels between this play about the 15th-century conquest of a European neighbor and the current rape of Ukraine all the more horrific. It comes to the Amherst screen June 2 and 18. 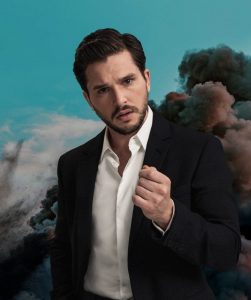 The 250-seat Donmar squeezes the play’s sprawling action onto a stage less than half the size of Shakespeare’s own “unworthy scaffold,” the Globe. The production, with 15 actors playing over 36 (gender- and color-blind) roles is true to the play’s vision, where the Chorus asks rhetorically, “Can this cockpit hold the vasty fields of France?” and invites us to engage our “imaginary forces.”

Henry V isn’t the first “big” Shakespeare play to be staged in that cockpit as a star vehicle. The theater has previously mounted (and NT Live has broadcast) King Lear with Derek Jacobi and Coriolanus with Tom Hiddleston.

Here the title role is taken by Kit Harington, like McAvoy another screen star returning to the stage. He’s best known from the Game of Thrones megaseries, where he played Jon Snow, a character with a similar coming-of-age arc as Shakespeare’s callow prince who grows up to be a warrior king.

Henry V is the sequel to the two parts of Henry IV, in which Prince Hal is a party guy hanging with the reprobate Falstaff and his tosspot cronies. Director Max Webster has added a prologue drawn from the previous plays, giving context to the young king’s untested ascent to the throne. The play was written as a glorification of Elizabethan power, but contemporary productions have sharpened the brutal edge of battle and, here especially, the callous treatment of the defeated, including the captive princess of France whose trophy marriage to Henry seems less a love match than a business arrangement.

Yasmin Chin Eisenhauer, who became Amherst Cinema’s new managing director in January, just as the theater was tiptoeing back into full operation, wrote me that she’s pleased at the resumption of NT Live, “offering new and returning audiences an opportunity to engage and be immersed in British theatre whilst equally enjoying the magic of the cinematic experience.”

General manager George Myers detailed for me the cautious process of reopening, from virtual cinema to reduced-capacity and private screenings to full-capacity and mask-optional operation beginning this month. “As a person who does not frequent much live theater,” he told me, he finds NT Live’s multi-camera capture gives “an incredible view of the performance [that] feels like you’re experiencing it from inside the theater.”