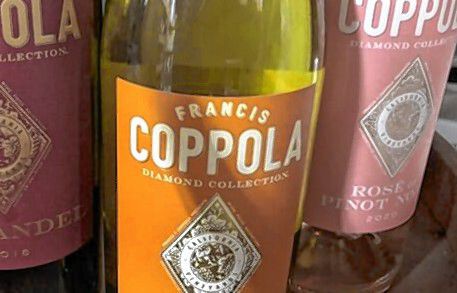 The Francis Coppola Diamond Collection Chardonnay is their entry level label. It clearly still smells and tastes like a California Chardonnay. It sells for around $10 a bottle. 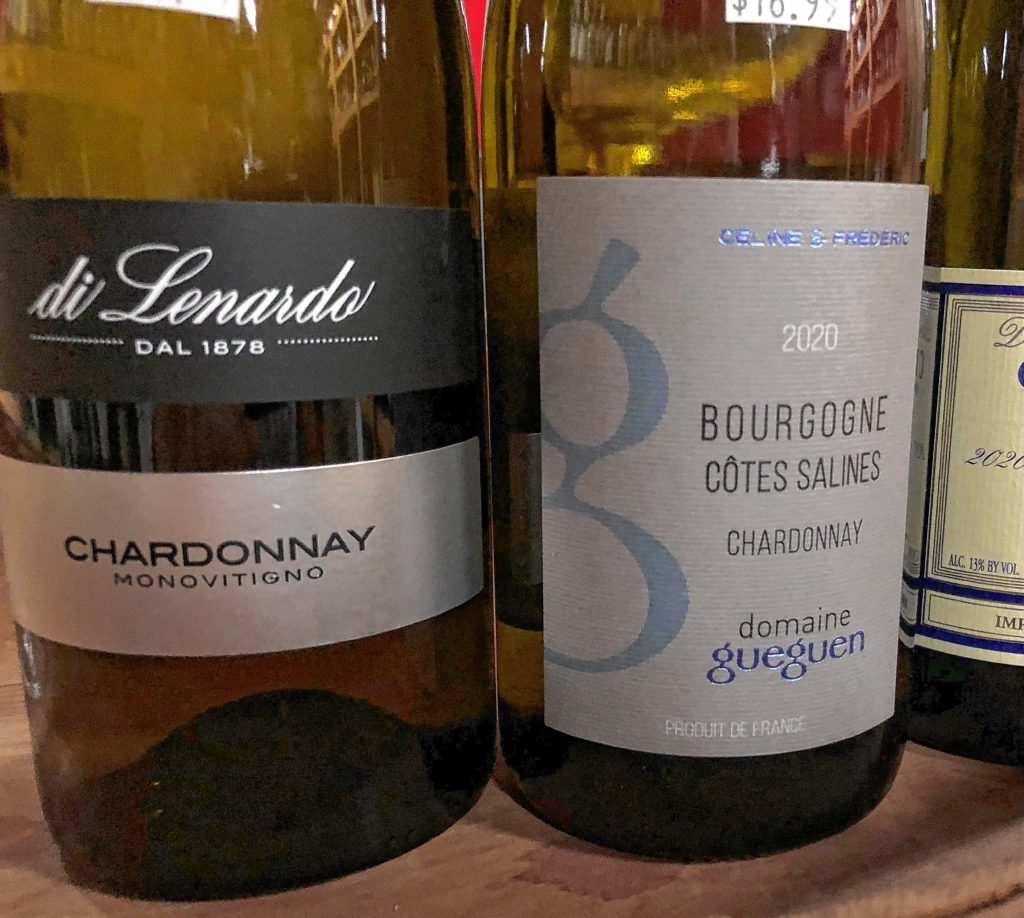 Di Lenardo Chardonnay is from the Italian region called Friuli, which is near the Slovianian border in the foothills of the Dolomites. At about $12, the Di Lenardo may change your mind about Chardonnay.

I was in a certain local fine wine store, eavesdropping on a person who was picking out wines for a home wine tasting. I happened to be standing in front of a selection of Chablis, when I heard them say, “We need some white wines. Anything but Chardonnay!”

I blushed like a rosé on behalf of the Chablis. Because, you see, Chablis is Chardonnay. If you like Chablis but think you don’t like Chardonnay, you are wrong. Chablis is made from 100% Chardonnay.

Chablis is the Northernmost wine region in Burgundy. Oh, and if you like “White Burgundy,” but think you don’t like Chardonnay, you are also wrong. At least most of the time. My own wife thought she hated Chardonnay until I explained to her that the White Burgundy she gets at Hope & Olive every time is, in fact, Chardonnay. So, why all of the Chardo-hate?

This backlash against what is one of the most noble and important grapes can, in my humble opinion, be placed solidly at the feet of cheap California Chardonnay. It is too often too buttery, too woody, too ham-fisted (in the sense of it tasting like jamming a flabby fist made of honeyed ham into your mouth). Some people love this style of Chardonnay. Lots of people, actually. There is literally a California Chardonnay called Butter. You may like this style of Chardonnay, and you are allowed to like whatever you like. But, if you like Butter Chardonnay or its ilk, you should probably stop reading this now. However, if you think you don’t like Chardonnay at all, read on.

Chardonnay is in the top 10, if not the top 5 most planted grapes in the world, year after year. There are beautiful expressions of Chardonnay from everywhere it is planted — even in California, which I just disparaged. Indeed, it was Chardonnay from Chateau Montelena in Napa, California that won the so-called “Judgment of Paris” in 1976; when California wines cleaned the clocks of French wines in a blind tasting in Paris.

It was that tasting of Chardonnay that put wines from the U.S. on the map. But, like so many terrible cover versions of Old Crow Medicine Show’s “Wagon Wheel,” the original Montelena was built upon a wonderful foundation and a storied history. And now there are far too many terrible imitations. It is the Californian Barefoot Butter Chardonnay, that sells for $5 a bottle, that is the Hootie version of Old Crow Montelena Chardonnay. Montelena itself now sells for a steep $50 plus a bottle. It is excellent, if you can afford it. And there are plenty of other delicious and elegant California Chardonnays, if you are willing to pay. But if you are a radio host or write a quarterly wine column for a free paper, $50 a bottle might be out of your range.

What might be in your (and my) price range that could convince you not to hate on Chardonnay? If you like Chablis (you know, Chardonnay from Burgundy in France), but know it is out of your price range, try the Domaine Gueguen Cote Salines. It’s grown right over the border from Chablis and is a more affordable $17. I likened it to Sunderland asparagus versus Hadley asparagus. Everybody knows Hadley asparagus is the best, but is it really that much better than the asparagus just over the border in Sunderland? I’ll let you be the asparagus judge. For my money, I’ll take this Gueguen Chardonnay at less than half the price of most Chablis and still get my Chard on.

How about Di Lenardo Chardonnay from the Italian region called Friuli, which is near the Slovianian border in the foothills of the Dolomites (the mountain range, not the Blaxploitation film and the subsequent Eddie Murphy biopic). This wine is “unoaked,” which is another popular fad in the world of fermenting and purchasing Chardonnay. Too much time in an oak barrel can make a wine taste like toothpicks, or vanilla, or coconut. A judicious use of oak barreling can make a wine wonderful, and smooth out some of the rougher edges.

But if you ferment a wine in a stainless steel tank, like the way Di Lenardo Chardonnay is fermented, it is what’s called an “unoaked” Chardonnay. It is a less adulterated, sometimes less ham-fisted, expression of the grape juice. While the DiLenardo does not “see oak,” as wine snobs say, it does “sit on its lees.” “Sitting on lees,” is also a wine snob expression that means, the grape juice mixes its flavors with the dead yeast that originally turned the grape juice’s sugar into alcohol. Sitting on dead yeast sounds gross. But it can make the wine taste amazing, giving it richness and depth. And at about $12, the Di Lenardo may change your mind about Chardonnay.

Another affordable French Chardonnay from a reputable maker in the South of France is the Arrogant Frog Chardonnay from Les Domaines Paul Mas in the South of France. It’s got a somewhat lame cartoon of a frog dressed as a gentleman farmer on the label. The frog puts the ass in the ascot that it is wearing. But it’s a decent French Chardonnay made for the California Chardonnay drinkers pallet. But still, you know, good. It’s much fruiter than most Burgundy. And it spends some time in oak, but it is not a butter orgy. And you can get it for around $12.

So as not to fully trash affordable Chardonnay from the Left Coast, there are a few I’ve had of late that I did not hate. One is the Clos du Bois North Coast Chardonnay for around $10. It is more woody tasting, due to the time it has spent in oak barrels. It’s got more of a butterscotch than a strict butter flavor. And it has a bit of a higher alcohol content than many whites at 13.5% ABV. That high alcohol can make up for a multitude of ills. And you could drink this less ham-fisted Chardonnay with actual ham.

The last affordable California Chardonnay that I didn’t hate is from Coppola. Yes, THAT Coppola. As in “Luca Brasi sleeps with the fishes,” Coppola. As in “Leave the gun, take the cannoli,” Coppola. And while Francis drops the “Ford” from his name when it’s on his wine labels, he has historically been very involved in his wines. Although he has now sold the company, he is still on the board.

If you are a wine drinker who ascribes to the ABC movement, “anything but Chardonnay,” I urge you to reconsider. Perhaps migrate away from California and nearer to where I believe Chardonnay to be best — Burgundy. And please, don’t let me overhear you trashing Chardonnay while I am spending time with bottles of Chablis. It’s embarrassing for all of us.