The Magic of Edibles 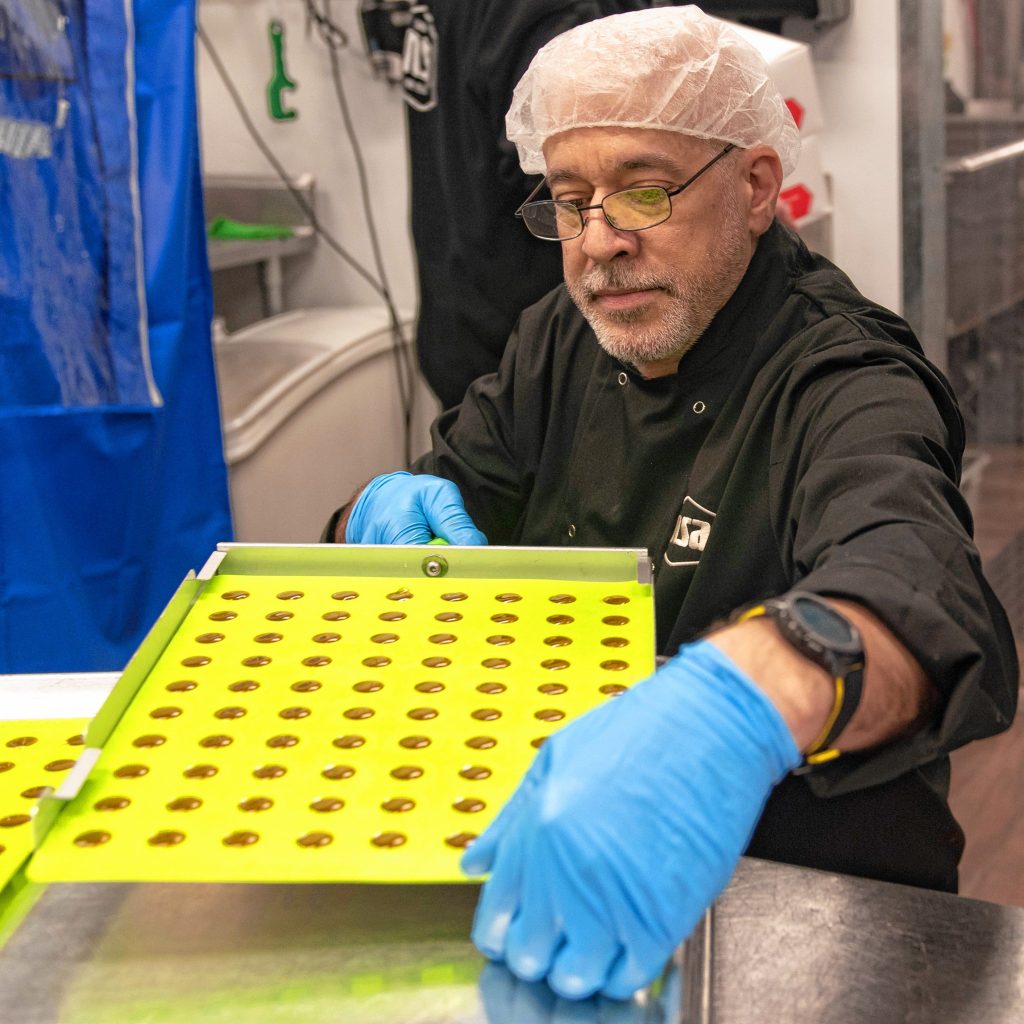 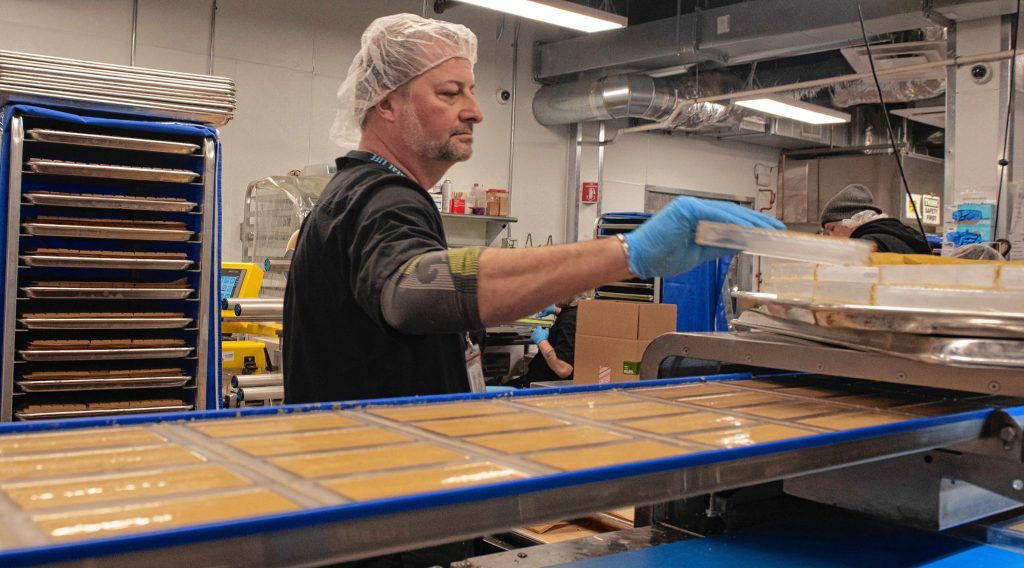 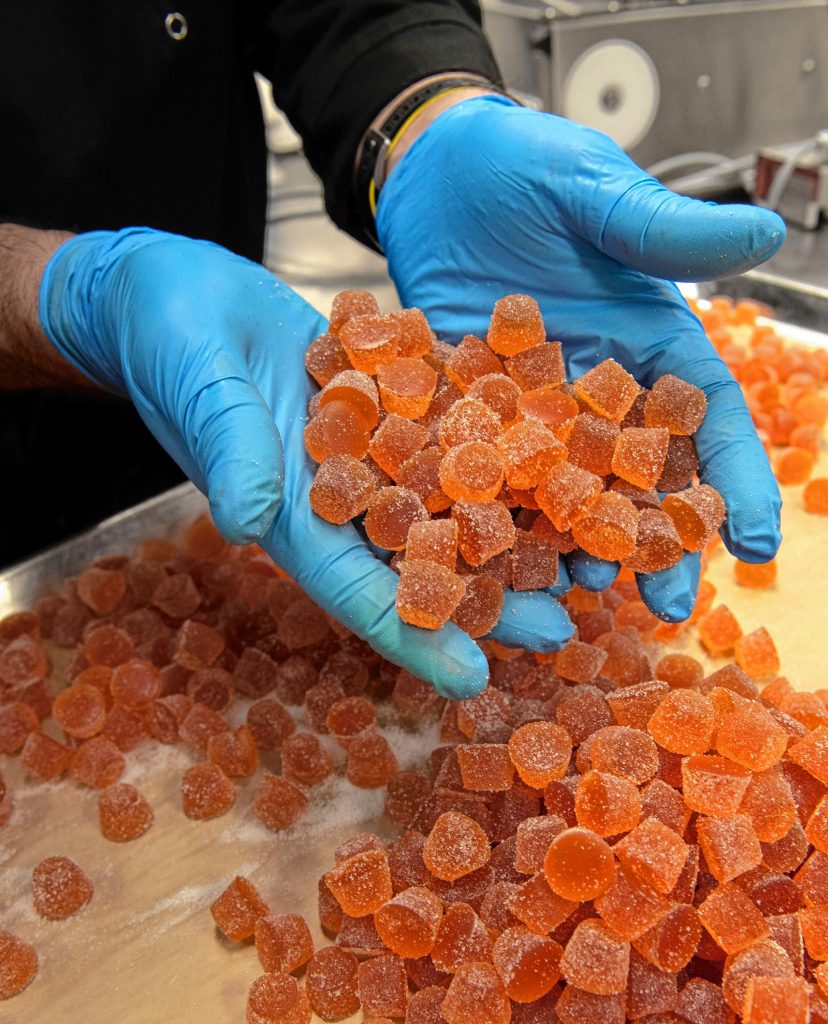 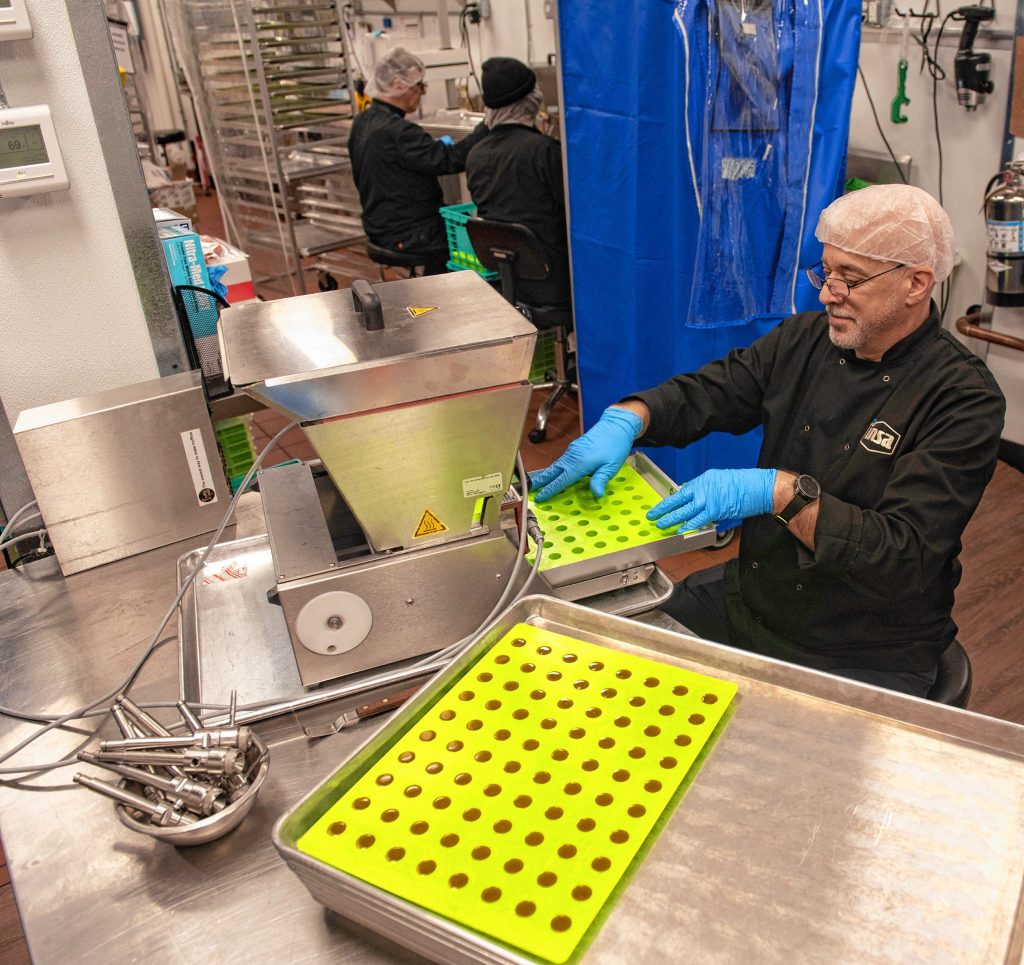 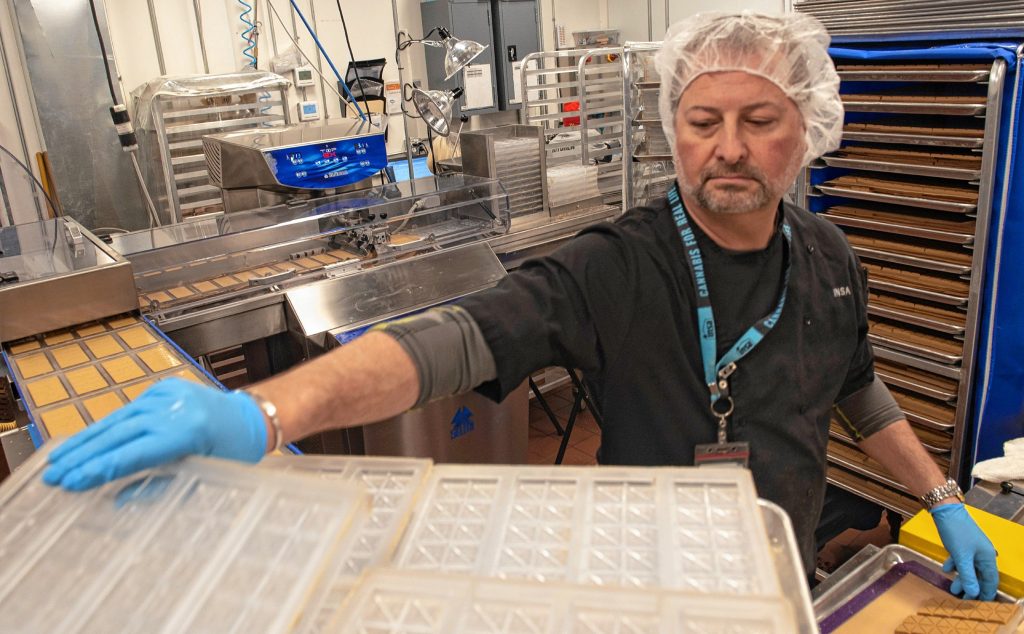 Tucked in the back of INSA’s Easthampton headquarters on Pleasant Street is a little slice of heaven. Like any restaurant with great food, the kitchen is where the action is at — and at INSA, it’s a place that combines the sweet smells of chocolate, sugar, and, yes, cannabis.

Within these walls is where the magic happens — magic in the form of marijuana-infused edibles that are eventually shipped to INSA’s marijuana dispensaries throughout the state for sale to customers at its stores in Massachusetts.

This kitchen is where “head magician” Julian Rose and his team turn recipes into gummies, chocolate edibles, tinctures and topicals. The products are fast becoming a popular way for customers to consume marijuana in the budding retail industry.

“Whether it has cannabis or not, it’s still a confection. I think what I bring to the cannabis world is higher quality,” Rose said during a recent interview with the Advocate.

According to a report from Zion Market Research, the global cannabis edibles market was valued at approximately $2.3 million in 2018, and is expected to generate around $11.5 million by 2025, a jump of 25%.

“It’s a solid category, and it will grow as the industry grows and people learn how to use them and learn their benefits,” David Catanzano, head of cannabis operations for Tilt Holdings, a multistate operator headquartered in Phoenix, told MJBizDaily, which covers the cannabis industry in the U.S. and Canada, in February.

That’s why dispensaries like INSA, one of the first to open in Massachusetts and with locations in Easthampton, Springfield and Salem, are investing mightily in the burgeoning sector of the fast-growing industry.

Rose’s official title at INSA is director of research and development. A professionally trained chocolatier and confectionist with over 45 years of experience, Rose is responsible for creating all of the edibles INSA produces. He played a similar role on the West Coast not too long ago and was lured to the East Coast a few years ago, first to consult for INSA, and then to work for the company as master chef for the past 18 months.

Originally from Montreal, Rose got an early start in his career as he began working for his family’s pastry shop at 6 years old.

“I was raised in a pastry shop environment with pies, cakes, chocolate — anything you can imagine that’s yummy and good,” Rose told Pro Cannabis Media, a Massachusetts-based talk show that covers the cannabis industry. “Oddly enough, it wasn’t that special for me because it was just there and available — you could just stretch your hand out and take a cookie!”

Alongside his parents and brother, Rose worked for the family business throughout his adolescence. He went on to receive professional training in pastries and confection, graduating best in his class at the Institute en technique hotelier du Quebec in 1982.

From there, Rose and his brother took over the family business

“We doubled what was there, and doubled it again,” Rose said.

After gaining a reputation in Montreal for delivering European-quality pastries and chocolates, Rose received an offer to work for the global chocolate company, Callebaut.

His work for Callebaut set him up to embark on multiple career opportunities in research, education and consulting in the field of confection and chocolatiering across North America, Europe and parts of the Caribbean.

In 2005, Rose found himself with an opportunity in the cannabis industry by chance.

“I was getting a lot of questions from people in the cannabis world out West. They were having issues with chocolate. It’s not as straightforward as people think,” Rose said.

Since then, Rose has consulted for cannabis companies in California, Colorado and Oregon. After consulting for a company in the city of Portland, Oregon, he was offered a full-time position in their kitchen. Twelve years into work with the Portland company, he was contacted to consult for INSA.

Artisanship of the edible

INSA’s mission statement — “to make good days better” with its marijuana products — resonated with Rose, and the idea of bringing his expertise to the fresh market of Massachusetts was exciting.

“I thought INSA was so well grounded on what their objectives were,” Rose said in an interview for the podcast, “Beyond the Show.” “They were extremely serious, and very business focused about bringing quality, great products, and repeating the quality in products. ”

He made the move from Oregon to Massachusetts in 2020 to work for the company full time.

Rose is first a culinary artist, and second an entrepreneur. He has an eye for innovation, always testing the boundaries. His main goal in his work with INSA is to bring high-quality artisanship to the edible market.

Universally, edibles have been seen as just a vehicle of consumption — energy within the creation process is usually focused on cannabis, rather than the manner it’s consumed.

“I proposed to INSA that we make top quality candy that happens to be infused with cannabis,” Rose said.

This top quality starts with the ingredients. In developing INSA’s gummy recipe, Rose says he opted to use real fruit puree, and pectin as the gelling agent, rather than the standard choice of gelatine.

Pectin, which is found in apples and other citrus, makes the gummies easier to bite rather than dense and hard to chew.

In developing new unique flavors for INSA, Rose turns to seasons and holidays for inspiration. Last fall, he developed a pumpkin pie flavored truffle, and a caramel apple flavored gummy. For Valentine’s Day, a red velvet cake — all infused with pure cannabis concentrate developed in INSA labs next door.

To ensure top quality throughout all aspects of their products, INSA controls most of its supply chain. The cannabis used to make INSA’s edibles is grown directly above the kitchen.

After being harvested, the plant is processed and the THC in the plant is extracted. It’s then sent to the INSA lab next door, where the extract is purified and made into a thick concentrate.

Although Rose has a lot of freedom in the kitchen, there are state regulation constraints he’s in the process of tackling in order to pursue other avenues of creation in the world of edibles.

First, the lack of testing facilities in the area is a huge limiting-factor. Per state regulation, each batch of edibles made must be tested before being sold.It currently takes a week for goods to be tested after being made. For potential products like pot cookies or brownies that are best consumed a day or two after being made, this is a major obstacle in producing such products.

Second, the state requires products to be labeled as a cannabis-product with approximate dosing. For items such as chocolate bars or gummies, this is easy. But for one of Rose’s more extravagant ideas, this rule is a major hurdle.

Rose dreams of someday offering a cannabis-infused truffle counter. Presenting a multitude of flavors, patrons would be able to pick out a dozen or half a dozen of infused artisan truffles that would be on display in true pastry shoppe-fashion.

The issue: each flavor needs to be labeled as a product containing THC, with approximate dosing. Rose is working on a unique solution, experimenting with edible stamps derived from cocoa powder to label each individual truffle directly, without compromising aspects of his idea.

When asked about his thoughts on people making their own edibles at home, Rose offered this advice. “I think it’s interesting — it’s experimental. The difficulty I see in that is, you have to do it for yourself. Everyone has a different reaction and a different digestive system.”

“If you use flour, it could be more or less strong once it’s baked. If you use concentrate, you know exactly what you’re putting in — you know the dosage, and the percentage of exactly what you’re making,” Rose said. “In baked goods, there’s the factor of heat. When you decarboxylate cannabis, that’s when the THC kicks in. You have to take heat into account, and at home that’s a bit of a mystery.”

When it comes to dosing, Rose notes that a little goes a long way when cooking with cannabis. The state-set serving size of THC is 5 milligrams. That’s about the size of a pen tip, which is near impossible to measure at home without proper equipment.

On the INSA website, a tutorial is offered by Rose on cooking pot brownies at home.

When asked what excites him the most about his future with INSA, Rose shared some exciting plans for his kitchen. Later this spring, the dispensary plans on moving its edible operation to a bigger facility in Northampton. This will allow Rose to increase INSA’s production, devoting separate rooms and spaces to different products.

Those products are taking center stage in the cannabis industry right now, which is why the work Rose and his colleagues are doing in INSA’s kitchen is so important to the company’s success.