With warehouse delivery service, Easthampton’s Budzee aims to become the Amazon of weed 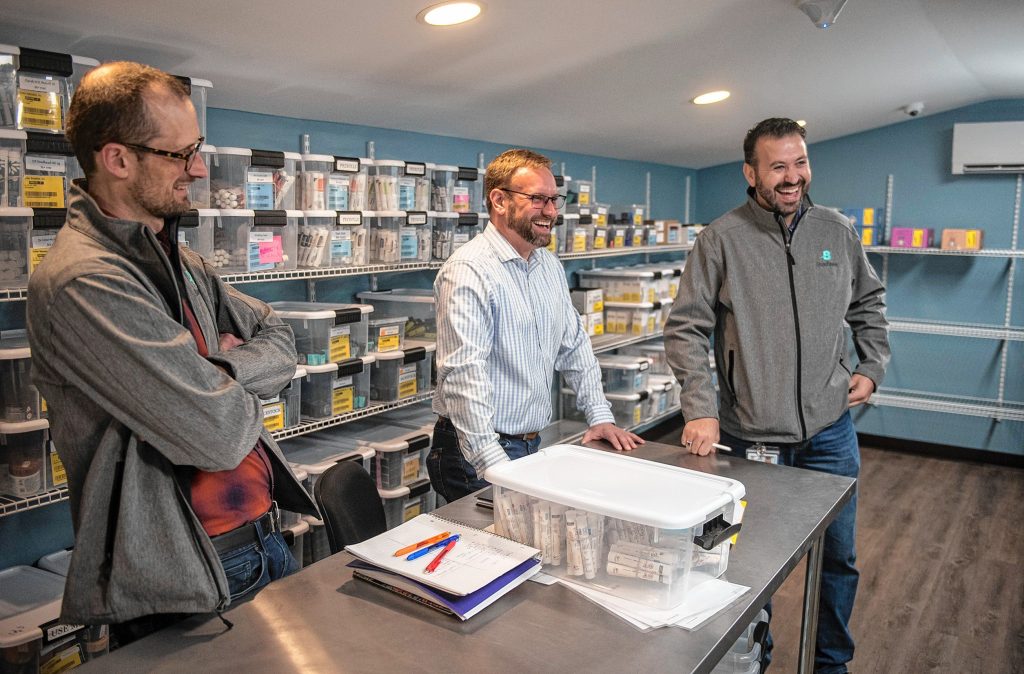 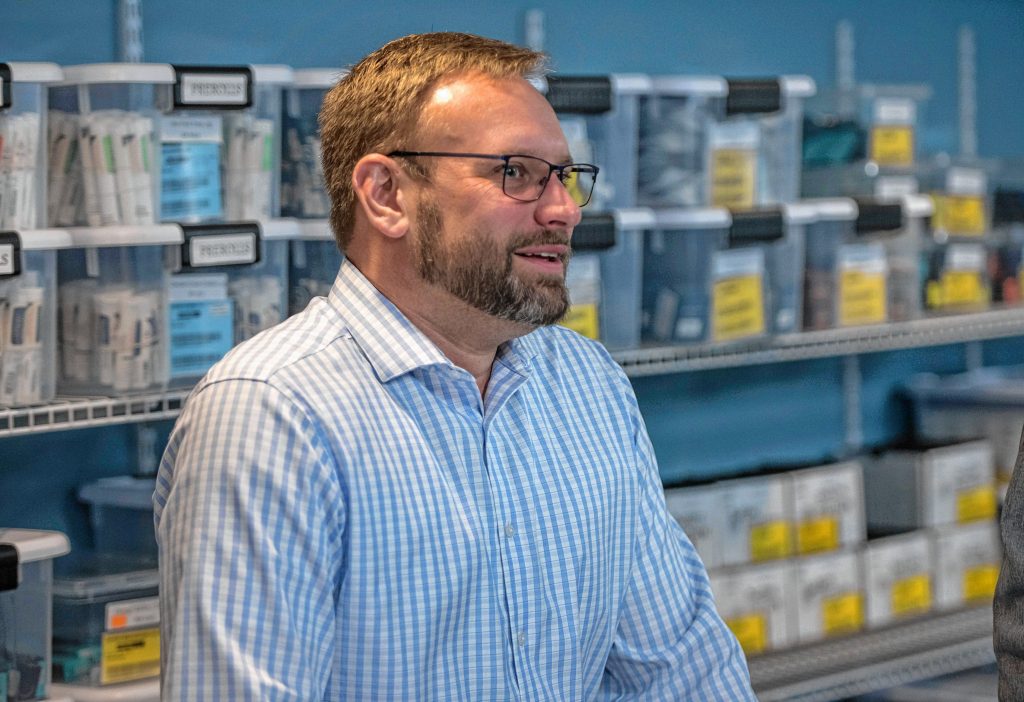 Budzee CEO Kevin Perrier talks about the cannabis delivery business in the vault of the firm's warehouse in Easthampton on Friday, April 8, 2022. 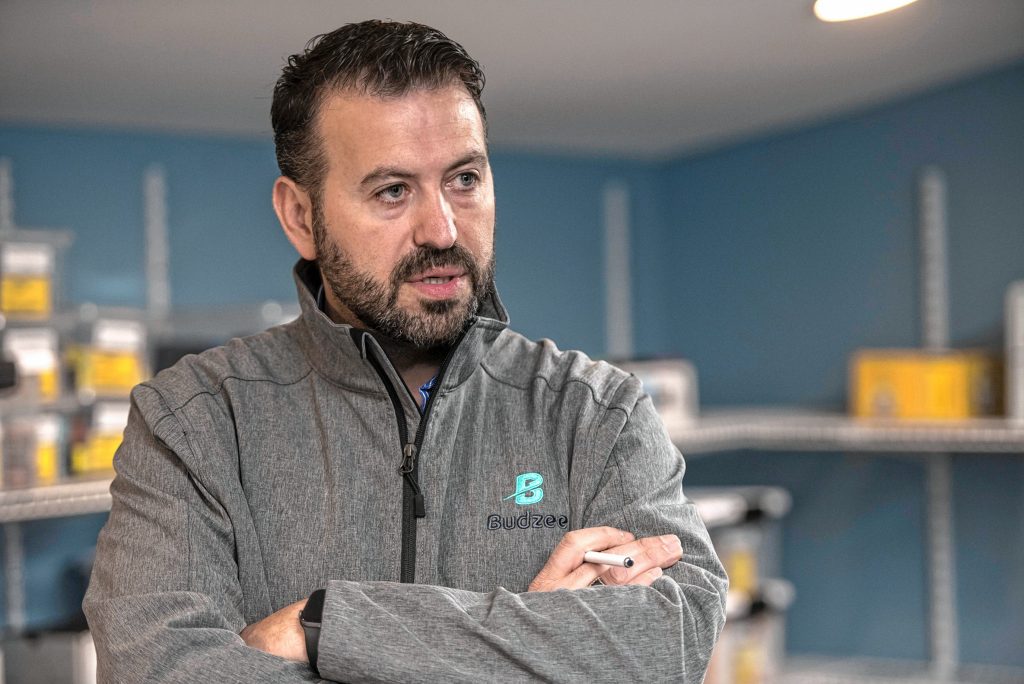 Budzee COO Volkan Polatol talks about the cannabis delivery business in the vault of the firm's warehouse in Easthampton on Friday, April 8, 2022. 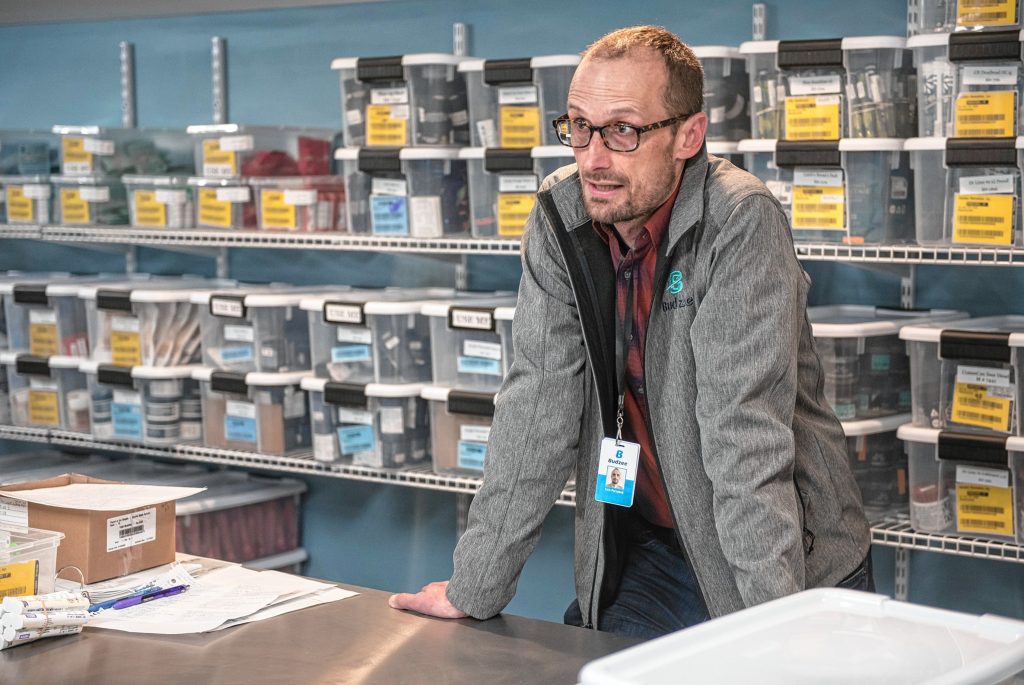 Budzee consultant Ezra Parzybok talks about the cannabis delivery business in the vault of the firm's warehouse in Easthampton on Friday, April 8, 2022. 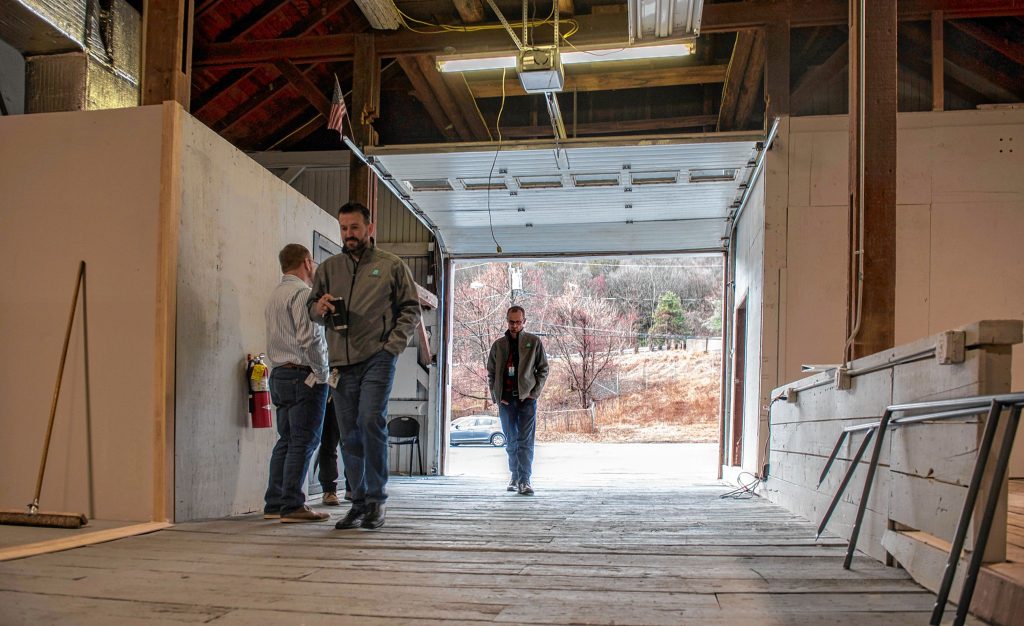 Budzee CEO Kevin Perrier, far left, COO Volkan Polatol and consultant Ezra Parzybok, right, walk through the sally port of their Easthampton warehouse, once a working barn for the former Underwood Farm, on Friday, April 8, 2022. With a remotely controlled door, the garage allows delivery vehicles to be loaded and unloaded in a secure space, a requirement of the Cannabis Control Commission. 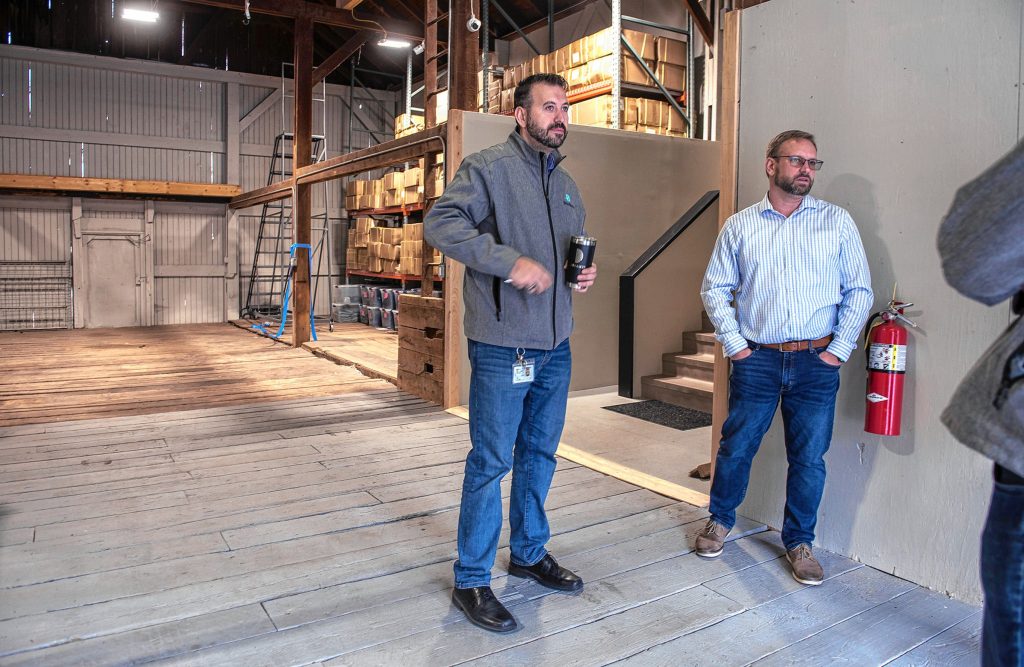 Volkan Polatol, left, and Kevin Perrier pause to talk in the sally port of their Easthampton warehouse, once a working barn for the former Underwood Farm, on Friday. The sally port, basically a large garage, allows delivery vehicles to be loaded and unloaded in a secure space, a requirement of the Cannabis Control Commission. 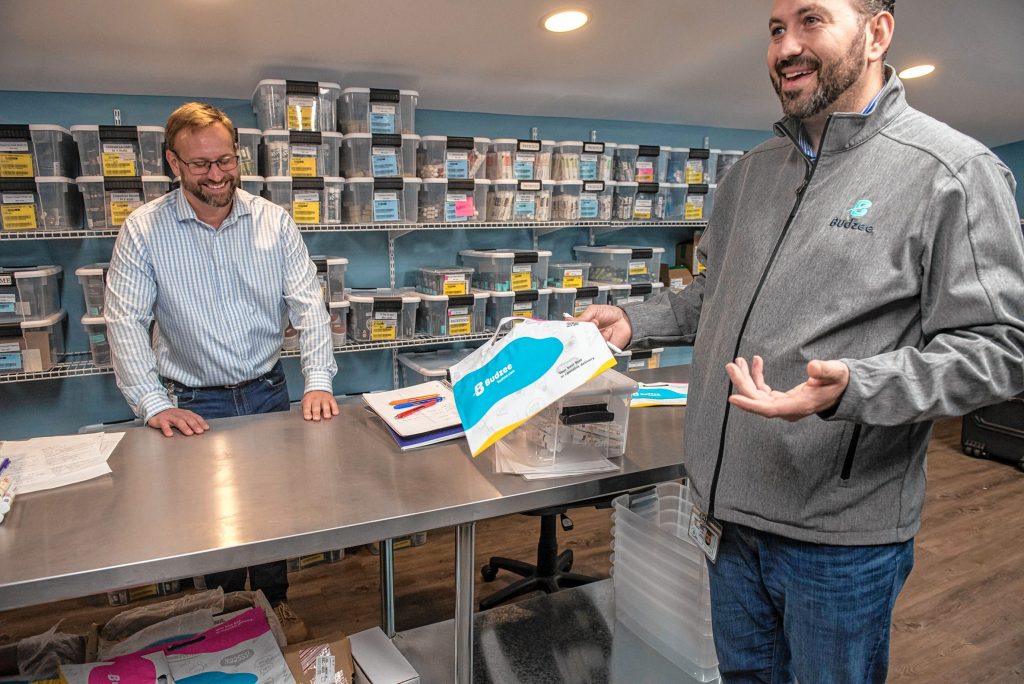 Budzee CEO Kevin Perrier, left, and COO Volkan Polatol talk about the child-resistant pouches used in their cannabis delivery business during an interview in the vault of the firm's warehouse in Easthampton on Friday, April 8, 2022. 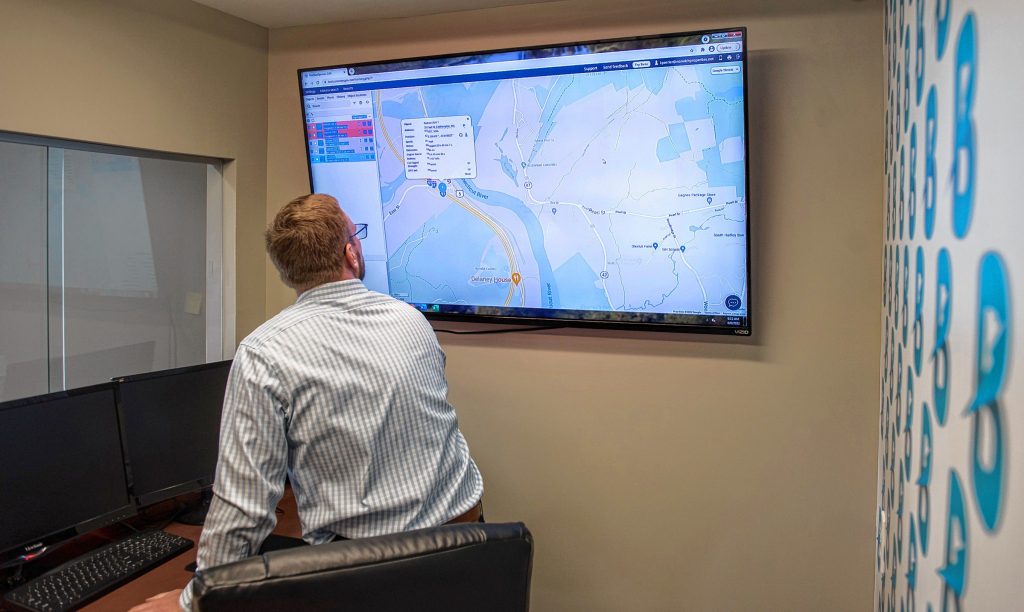 Budzee CEO Kevin Perrier visits the security room of the cannabis delivery business's Easthampton warehouse where delivery vehicles are tracked all over the state in real time. Photographed on Friday, April 8, 2022. 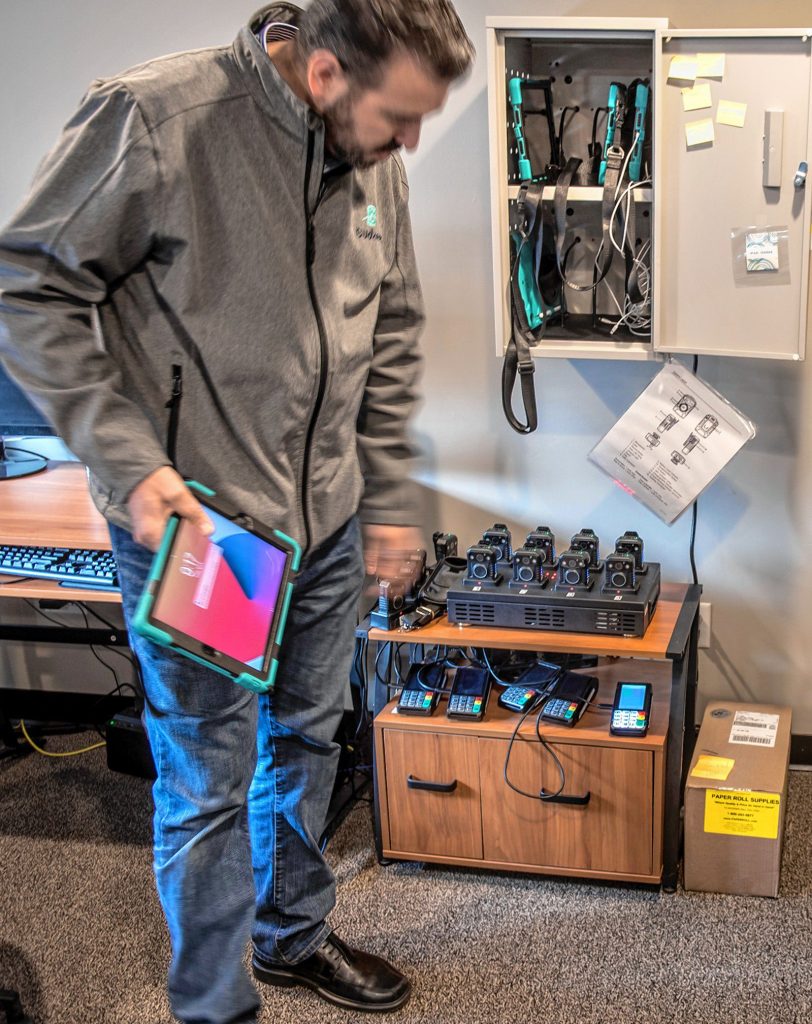 Budzee COO Volkan Polatol looks over a charging station for tablets and body cameras in the drivers' room of the cannabis delivery business's Easthampton warehouse on Friday, April 8, 2022. 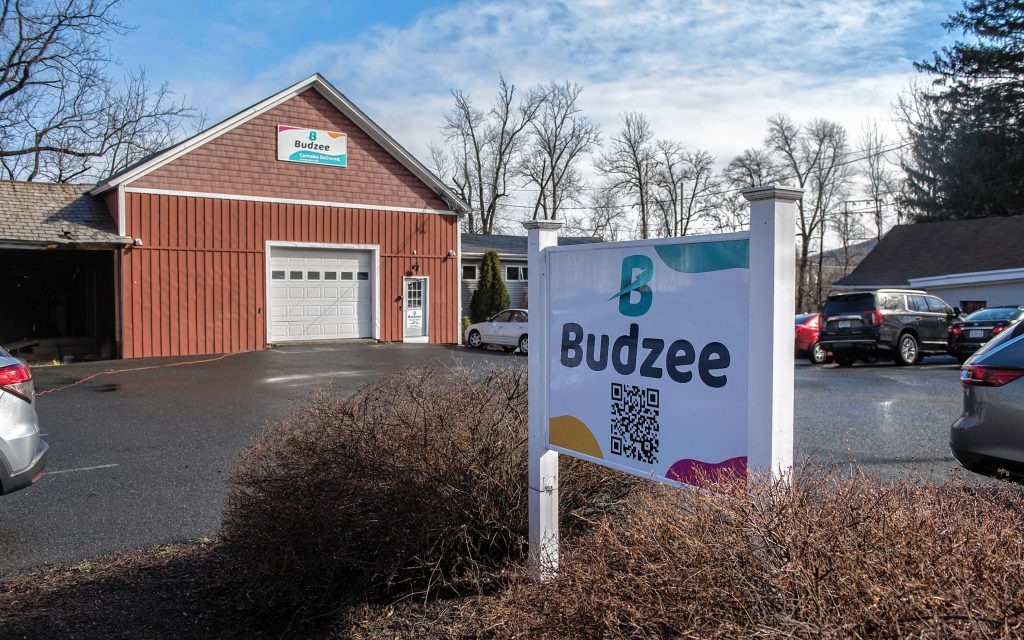 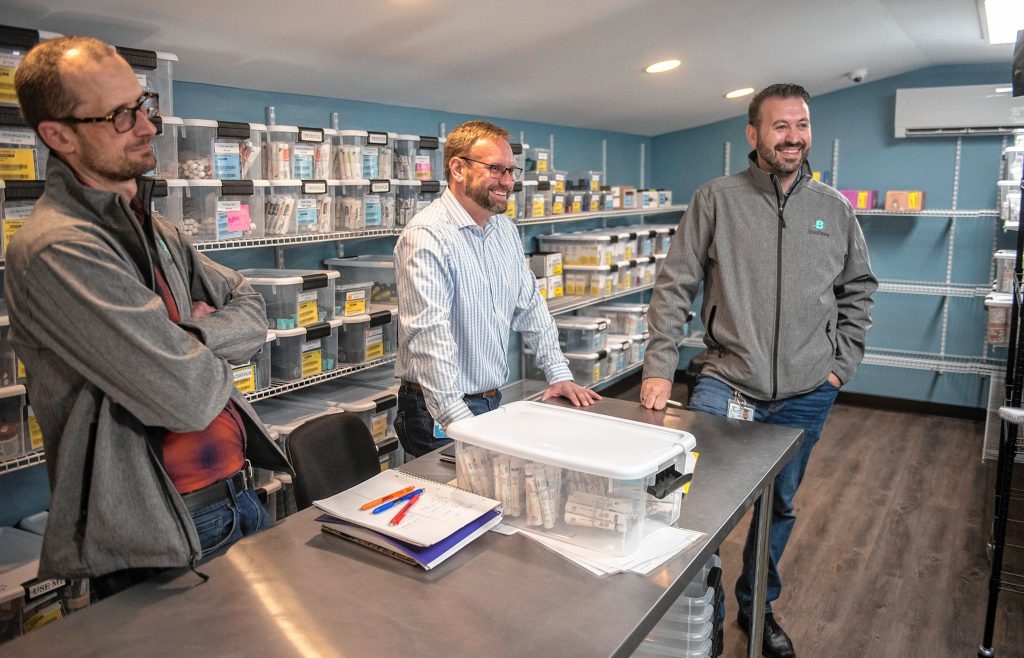 Budzee consultant Ezra Parzybok, left, CEO Kevin Perrier and COO Volkan Polatol talk about their cannabis delivery business in the vault of the firm's warehouse in Easthampton on Friday, April 8, 2022.

Seen from the road, the commercial warehouse at 17 East St. is unassuming. A garage door opens up to a sally port in the front with a drab office building connected to the side.

The ambitions of its owners, however, are anything but modest; they want their new company, Budzee, to become the first Amazon-esque delivery service for marijuana in the state and possibly the country.

“This model doesn’t exist anywhere,” co-founder Kevin Perrier said during a recent tour of the facility that opened in March. “You’re selling directly to the customer.”

Budzee provides a warehouse-style delivery system for weed. While there currently exist courier services that pick up marijuana products from retailers and deliver them, Budzee’s co-owners say they’re the first operation to cut out the middleman and deliver directly from their own warehouse.

Polatol and Perrier are also the owners of the retail stores Dreamer Cannabis in Southampton and Honey Northampton, as well as a cannabis manufacturing facility on Welmeco Way in Easthampton.

Initially the company will serve customers in Easthampton, Northampton and Southampton, with a recently-launched app. The goal, however, is to quickly ramp up operations to hopefully serve the entire state. For those in close proximity, express delivery will allow them to receive products in less than two hours. The company hopes to open a same-day service for this within 20 miles, and a schedule-ahead option for those farther afield.

The state’s Cannabis Control Commission is currently awarding weed delivery licenses exclusively to those who qualify for the state’s social equity program — those, for example, who were previously harmed by the so-called war on drugs.

That’s where Parzybok comes in. A vocal advocate for medical marijuana, Parzybok was arrested in 2015 after federal agents raided his Northampton home, where they seized 67 marijuana plants — part of his home-based medical marijuana operation. He received probation for the offenses.

Now able to receive a license from the state, Parzybok said his story has come full circle.

“Budzee wouldn’t be here if I wasn’t raided,” he said, adding that he has since continued his work as a consultant and advocate who still has a passion for cannabis. “People should have access to what they need.”

Budzee has built out its own software that will serve as the company’s backbone and has hired 12 drivers, part time and full time. The cofounders did not say how much they pay their drivers, who under state law are required to ride two to a car. Perrier had owned the building on East Street for some two decades, deciding it was the perfect location for Budzee, given its proximity to the interstate and multiple municipalities.

The company will offer a wide range of cannabis products — larger than most retailers, who only sell their own marijuana, they said. Budzee also hopes to attract customers with both high-end buds and less expensive ones.

“This is trying to reach a wider budget,” Parzybok said.

To comply with state regulations and best practices, drivers pull into the building’s sally port, which closes behind them. They then head up to the building, pick up their next order, secure it in their company vehicles and head back out on the road.

When asked how they intend to succeed in a crowded local cannabis marketplace, Polatol said the same would have been asked of Amazon years ago.

“It’s the convenience factor of it,” he said, the co-founders noting that once a customer creates a profile with the company, they no longer have to enter their license information or address again. “You just get online and we come to you.”

Dusty Christensen can be reached at dchristensen@gazettenet.com.