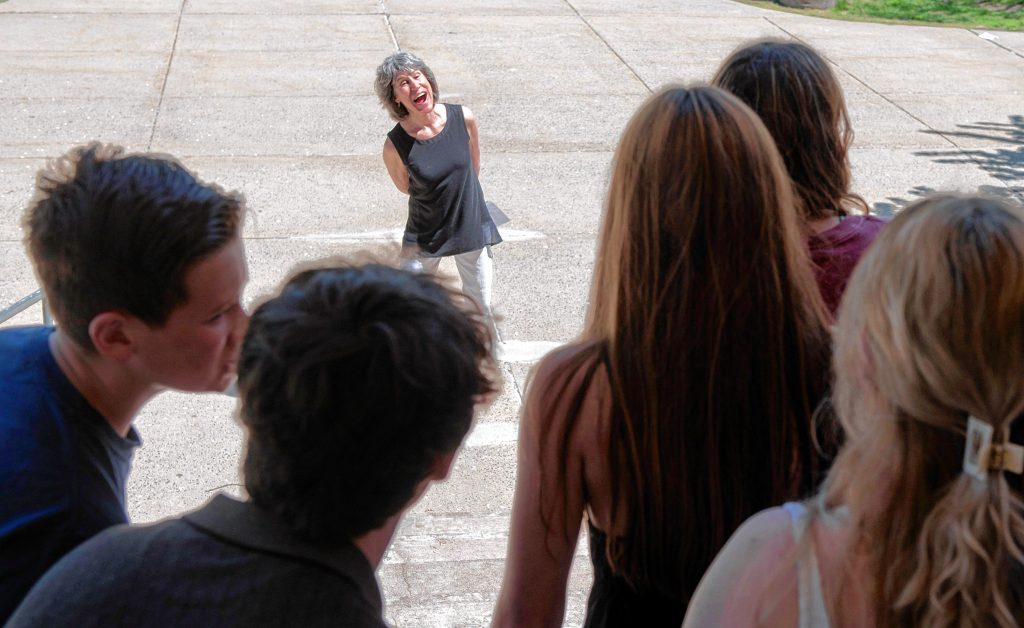 Northampton High School performing arts teacher Beau Flahive swings along with the 15 members of the school’s a capella group, The Northamptones, as they rehearse a set on the steps of Congdon Auditorium. They’ll perform at Race Street Live in Holyoke on May 24. 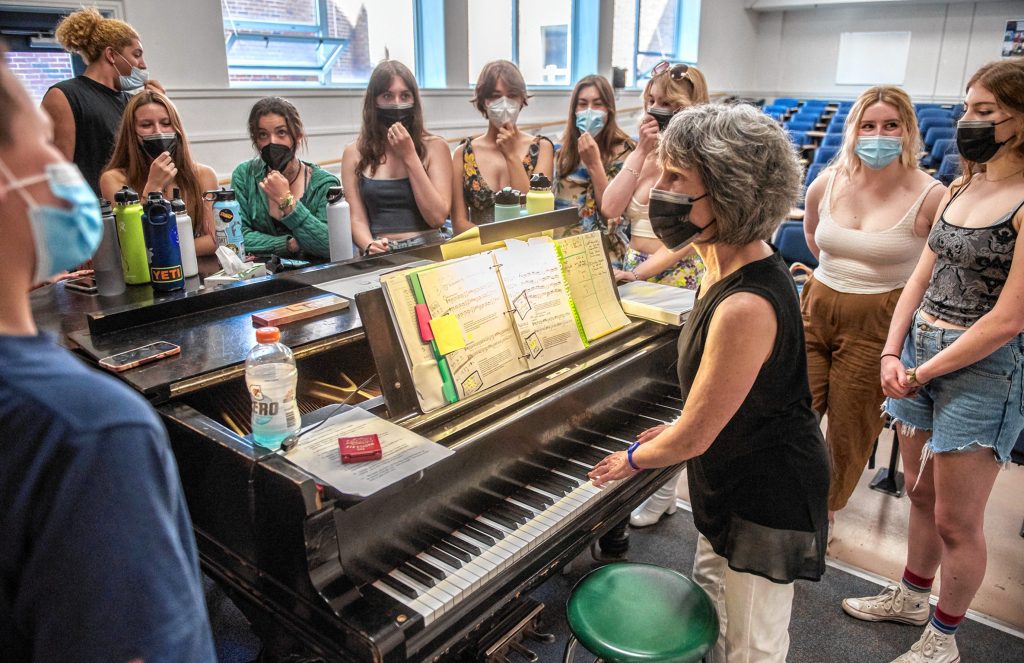 Beau Flahive, the longtime fine and performing arts teacher at Northampton High School who’s retiring in June, leads a warmup in the Little Theater for The Northamptones, the school’s a capella group that she started about 20 years ago. 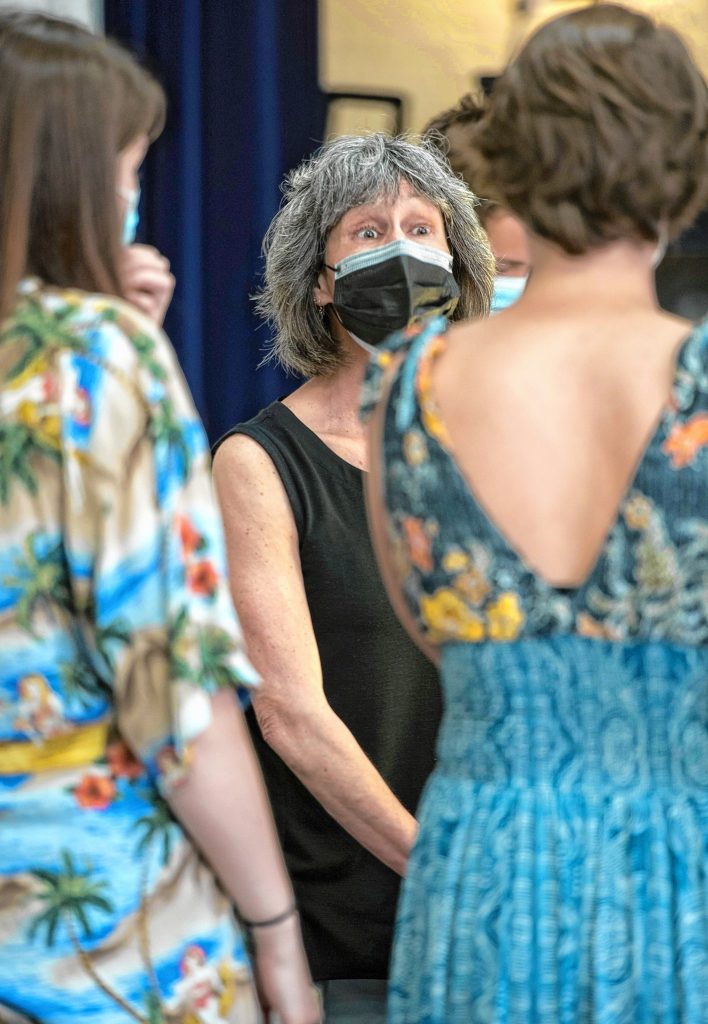 Students say Beau Flahive brings energy, compassion and skill to her work as a music teacher at Northampton High School. Here she leads The Northamptones in a rehearsal. 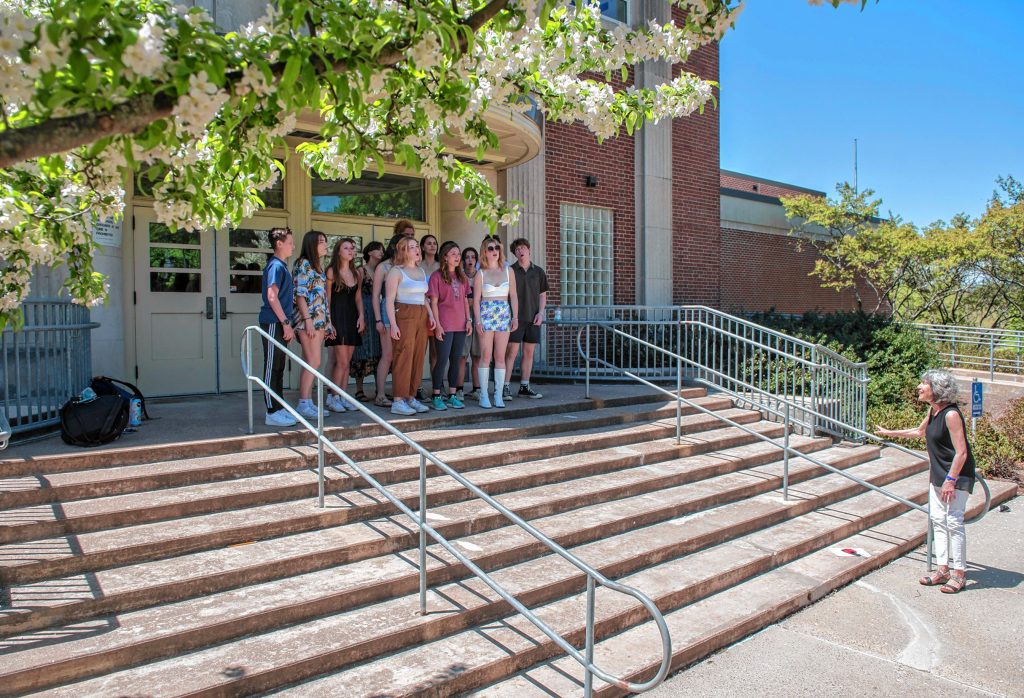 Beau Flahive, a longtime teacher of fine and performing arts at Northampton High School, listens as the school’s a capella group, The Northamptones, performs Joni Mitchell’s “Woodstock” on the steps of Congdon Auditorium at the school. 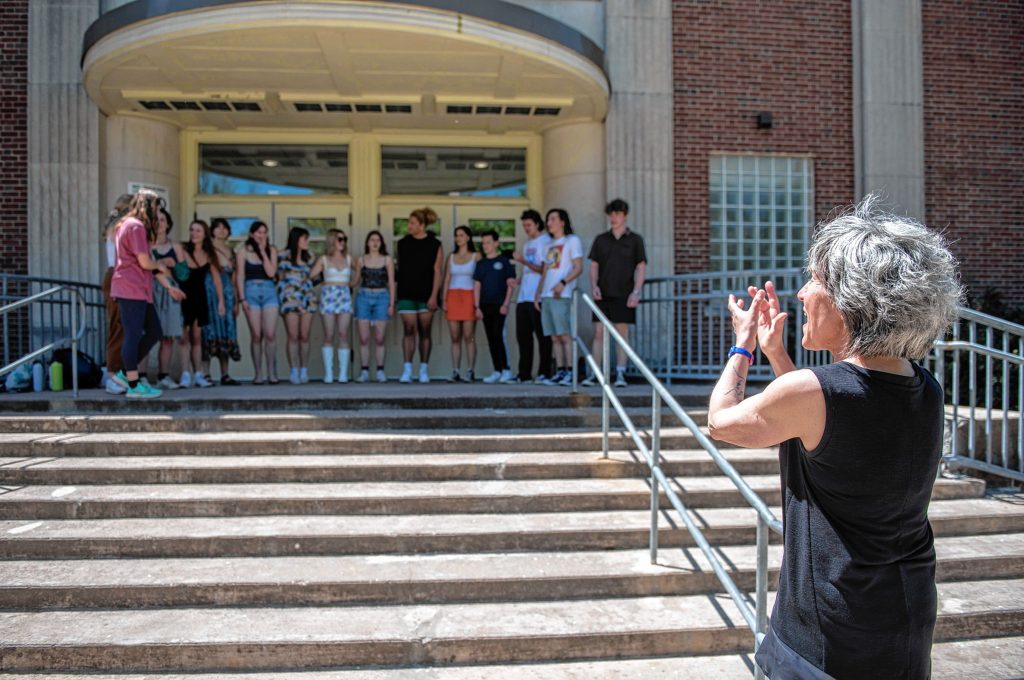 A job well done: Beau Flahive applauds The Northamptones, Northampton High School’s a capella group, after they wrapped a recent rehearsal outside the building by doing Queen’s “Bohemian Rhapsody.” 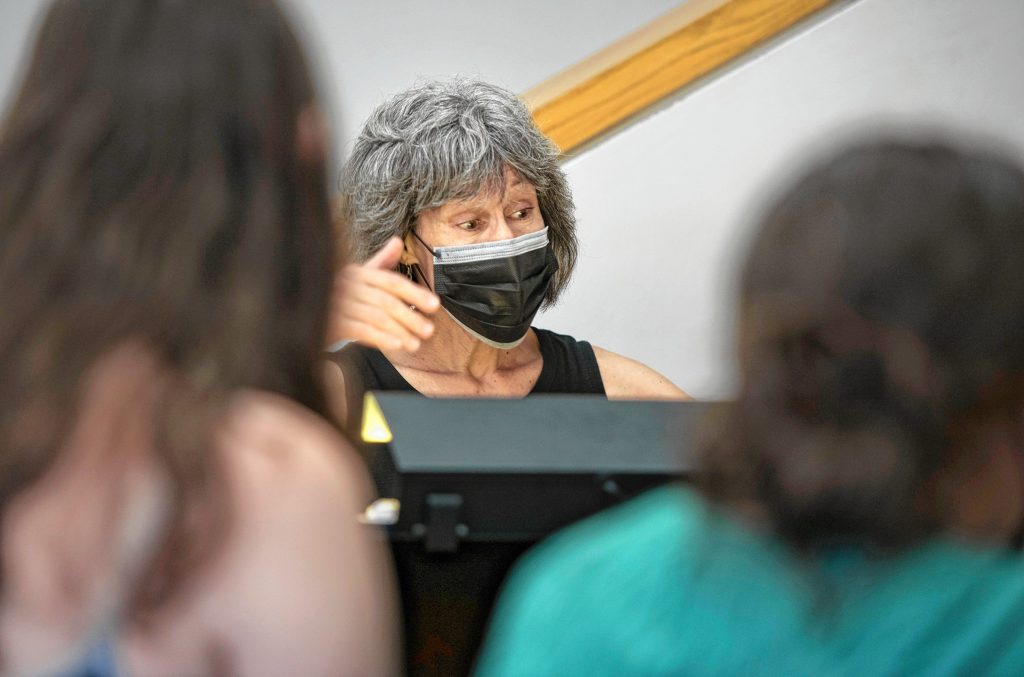 Beau Flahive, fine and performing arts teacher at Northampton High School, leads a warmup for the a capella group The Northamptones at the start of a recent rehearsal. She’s retiring in June after 22 years of leading the school’s vocal music programs. 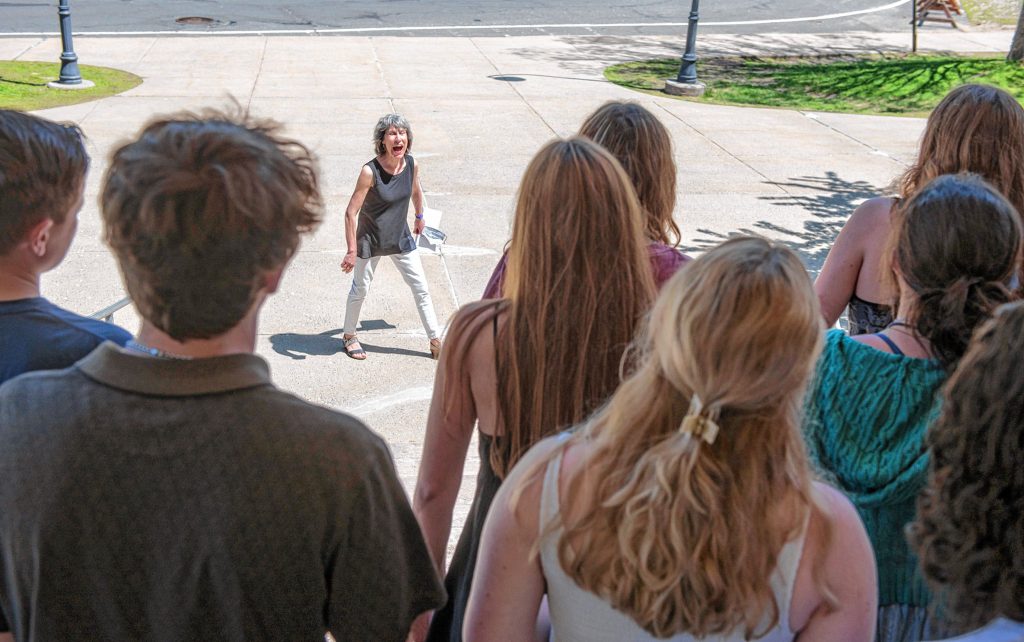 Northampton High School fine and performing arts teacher Beau Flahive offers feedback to The Northamptones, the school’s a capella group, as they rehearse outside the school. Flahive is set to retire at the end of June. 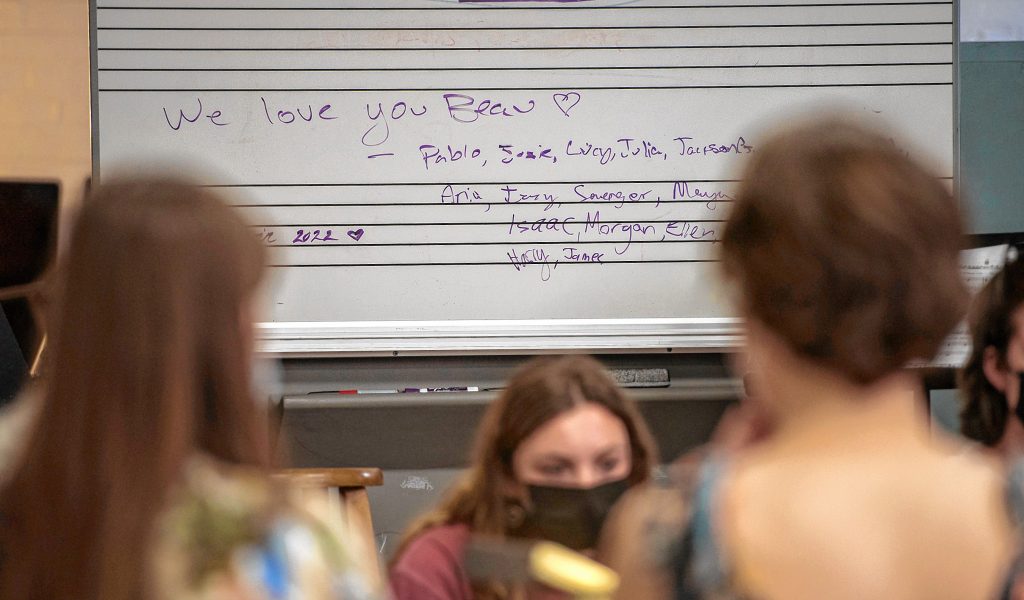 A message to Northampton High School fine and performing arts teacher Beau Flahive, soon to retire, graces a whiteboard in the school’s Little Theatre. “So caring and compassionate” is how senior Lucy Bernhard describes her.

When she was studying voice, piano and composition as a college student, Beau Flahive was thinking of a possible career as a performer. She was already playing in rock bands and jazz ensembles to help pay for college, and the idea that she might teach music, she says, “was not something I imagined doing.”

And Flahive, who came to Northampton High School 22 years ago as a fine and performing arts teacher, couldn’t imagine that if she did take up teaching, it would be in a high school. Yet it’s a move that worked out for the best, she says.

“I kind of stumbled into teaching, and I found that I loved it,” said Flahive, who directs three vocal groups at NHS, including the a capella group The Northamptones, and has been a key figure in producing the school’s annual musical.

“Life can take you in directions that you never expected,” she noted, “and then you discover a whole other side of yourself.”

Flahive, who is 62, stepped down this month from NHS after more than two decades of building up the school’s vocal music programs. She’s come a long way from her start there: leading a single chorus class made up of what she called “17 tough kids” at 7:30 a.m.

But those tough kids turned out to be “wonderful,” she said, “and we had 70 kids in the program the second year, and then over 100 … it became much more popular.”

Popular indeed. Students and others who have worked with Flahive can tick of many of her attributes — energy, musical versatility, an upbeat personality — but more than anything it’s the way she finds satisfaction in developing her students’ skills and their commitment to music.

“Beau is probably the hardest person in the world to compliment because she’ll always turn and give that credit to the people around her,” said Steve Sanderson, event producer for the Northampton Arts Council.

In that capacity, Sanderson has worked for years with Flahive at the Silver Chord Bowl, the annual collegiate a capella group competition that has included The Northamptones for about the past 16 years.

“Think of how many students she’s had an impact on, and then all the people they’ve touched as they’ve gone out in the world,” he said.

Lucy Bernhard, a NHS senior who’s part of The Northamptones and the school’s Chamber Choir, calls Flahive “so caring and compassionate. She makes every student in every group she works with feel important and welcome … she inspires us to be really dedicated.”

And Pablo Cespedes Ashe, who’s also in both those groups, says Flahive is also “honest — she will not hesitate to tell us when we sound horrible or when certain people are having pitch issues, or when we need to raise our energy levels in rehearsal.” But’s she also fair and giving, Ashe notes: “She knows our capabilities and expects only the best from us.”

Flahive, who lives in Northampton, had a busy private lesson business in town for voice and piano before she came to the high school. As she recalls, some of the teens who took lessons with her complained about a lack of vocal music programs at NHS, which became part of her impetus to apply to the school when a teaching position was offered.

“We had a band program but not much for vocal music. We didn’t have a choral room,” said Flahive, who admits that after a few years at NHS she became frustrated at a lack of resources and told the principal at the time, Beth Singer, that she was going to resign.

“I just said, ‘This isn’t working for me. We need more — we need a chamber choir, we need a full academic program.’”

To her credit, Flahive says, Singer and other school administrators added more funding for vocal music, including The Northamptones. The approximately 15-member group has since become an institution at the school, performing regularly in area venues and in places further afield, including Fenway Park.

A number of former members have gone on to professional careers in music, including Tennessee-based singer, songwriter and producer Jamie Kent.

Leading The Northamptones “has really been one of my highlights here, because we started this before ‘Glee’ or the idea of a cappella was really a big thing in schools,” said Flahive, referring to the musical comedy-drama television series that aired on Fox between 2009 and 2015. “The group really took off, and it’s been such a pleasure to work with so many dedicated students.”

Josie Kirley, an NHS senior and Northamptones member, had played saxophone in the JFK Middle School band but had no real experience singing when she joined the NHS Chorus in ninth grade. She says Flahive quickly became a mentor, which encouraged her to audition for The Northamptones and school musicals, where she was especially impressed by Flahive’s dedication.

“Beau has never shied away from hard work, and instead meets it to above and beyond our expectations, something that made both her and my last high school musical production so special,” Kirley wrote in an email. “She is committed, experienced, and just such a lovely person to be around when making music.”

Flahive also kept the singers going through the grind of Zoom sessions during the pandemic, Kirley says, when The Northamptones recorded a new album remotely: “Her smiling face kept all her virtual students coming back to spend time singing together, even while we were apart.”

Flahive didn’t begin her teaching career at NHS. She first taught at the University of Massachusetts Amherst, then later at Smith College for a few years as part of a fellowship; she also directed the music program at Stoneleigh Burnham school for girls in Greenfield. Along the way she earned two additional degrees, in music education and musicology, then developed her private lesson business.

At NHS, she says she helped revive the annual school musical, directing the singing and producing the shows. It’s been a lot of work but worth it, she says. This past March, NHS staged “Mamma Mia!” after the pandemic had shut down productions for the past two years, and “everyone was thrilled to be back again,” she said. “All four shows sold out.”

Flahive has also taught a songwriting class at the school in more recent years — just one of the ways, she says, that she’s been able to connect with students, which has made for “some really great relationships and a feeling that I’m helping students develop their own voices and talents. That’s been the best part of the job for me.”

As she gets set to leave, Flahive is slowly opening her private music business again after closing up shop when her schedule at NHS became too busy (she continued to perform as a solo pianist and singer up until a few years before she began teaching at NHS, she says). These days, she said with a laugh, “I’d like to see my husband a little more often.” The couple also hope to visit their daughter and son, ages 28 and 23, who live in New York City.

“I’d rather retire now when I have the energy to do other things, to explore the next chapter of my life,” Flahive said. “And I want to do it when I still feel really good about the job…. I’d like to think I’m leaving the [music] program in good shape to carry forward into the future.”