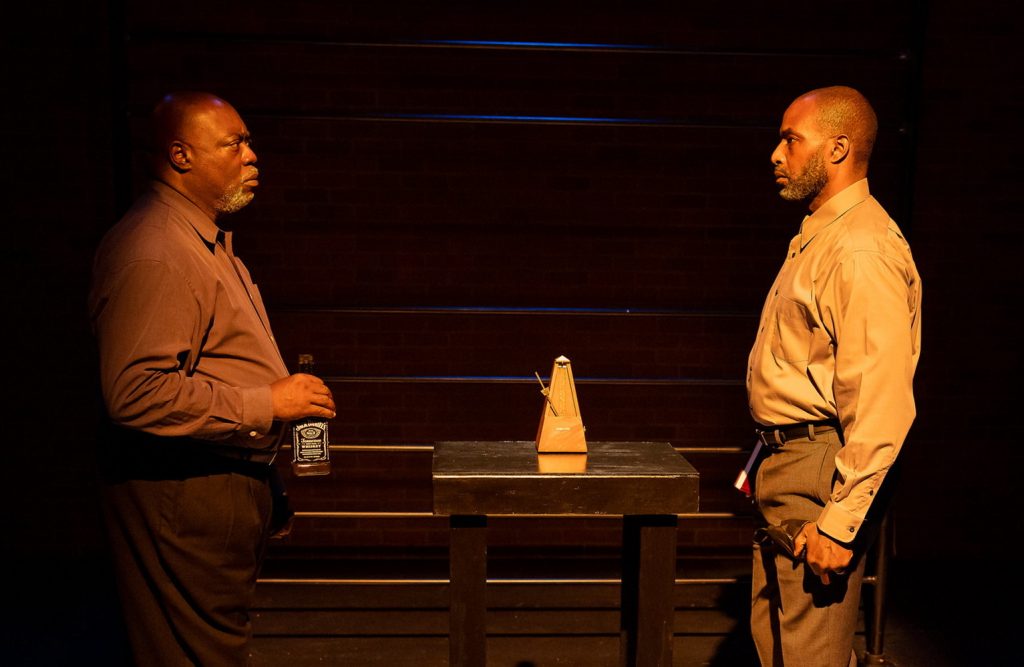 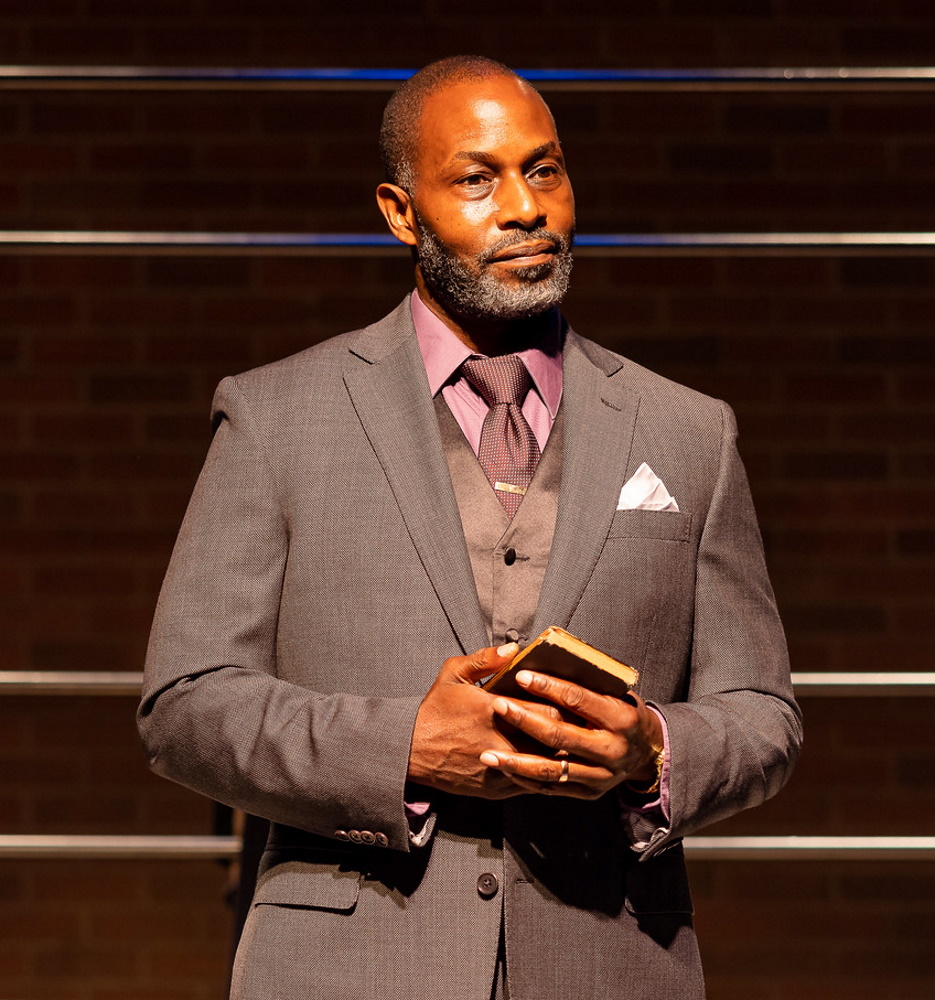 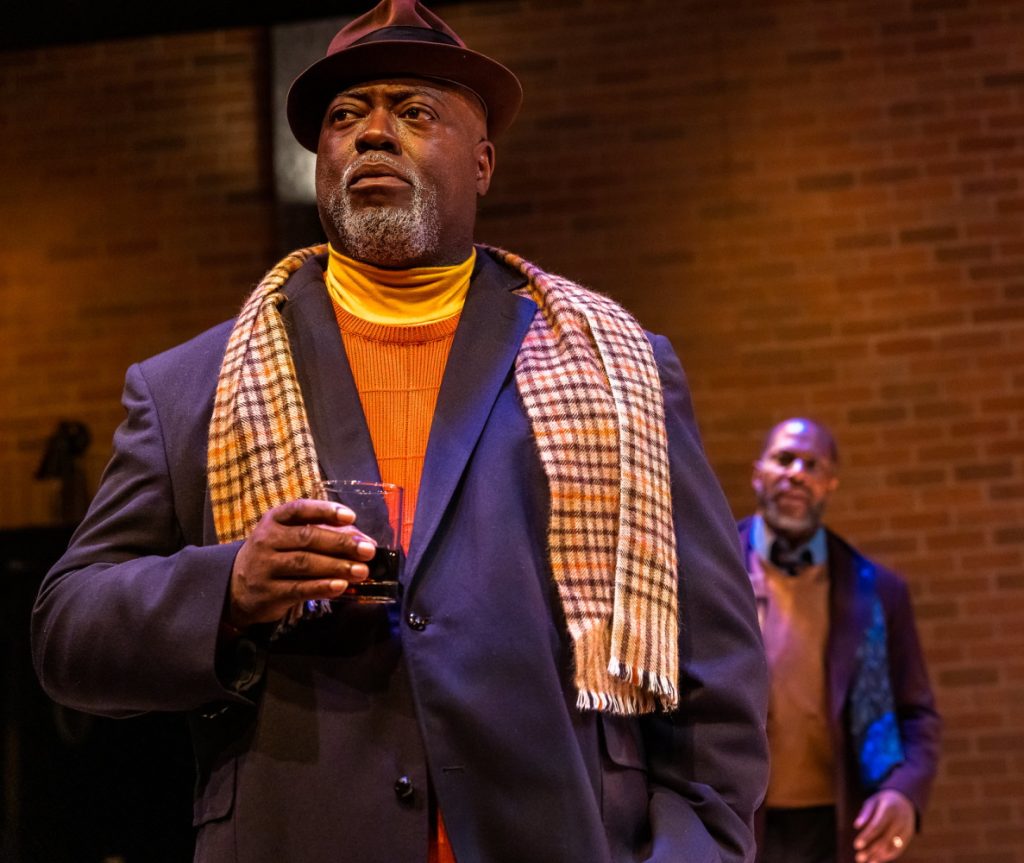 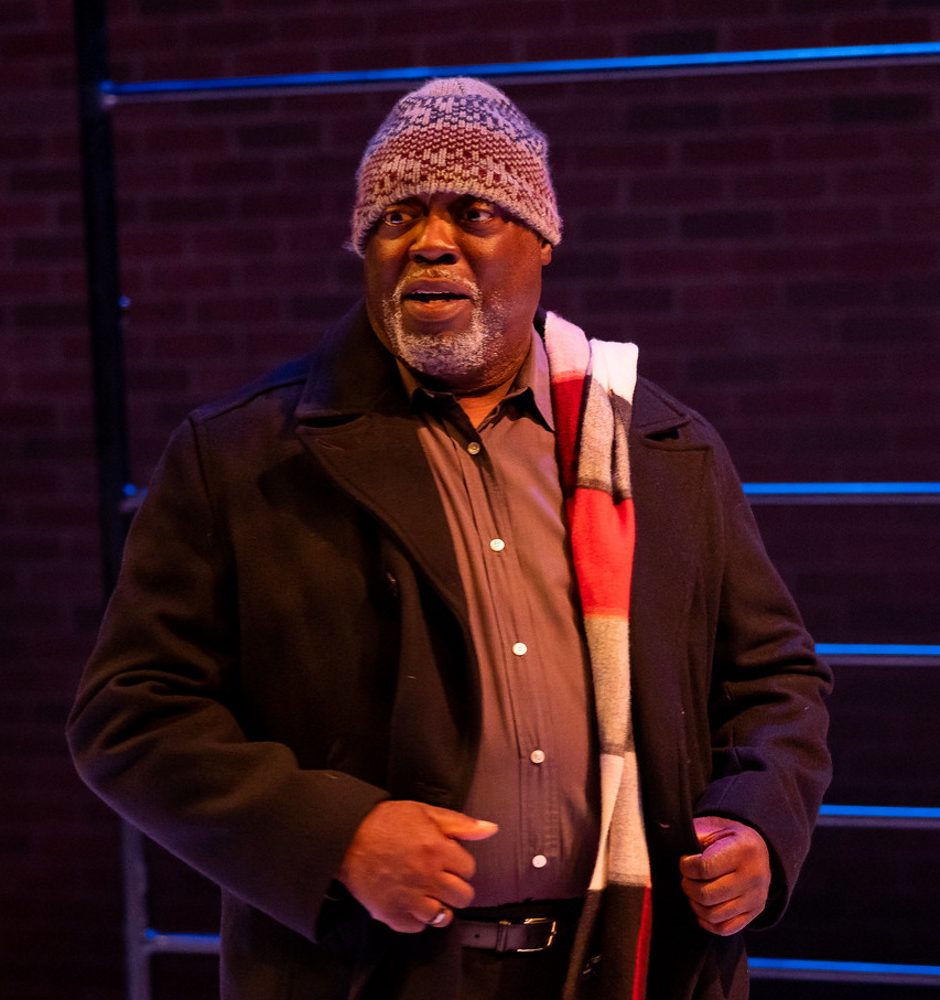 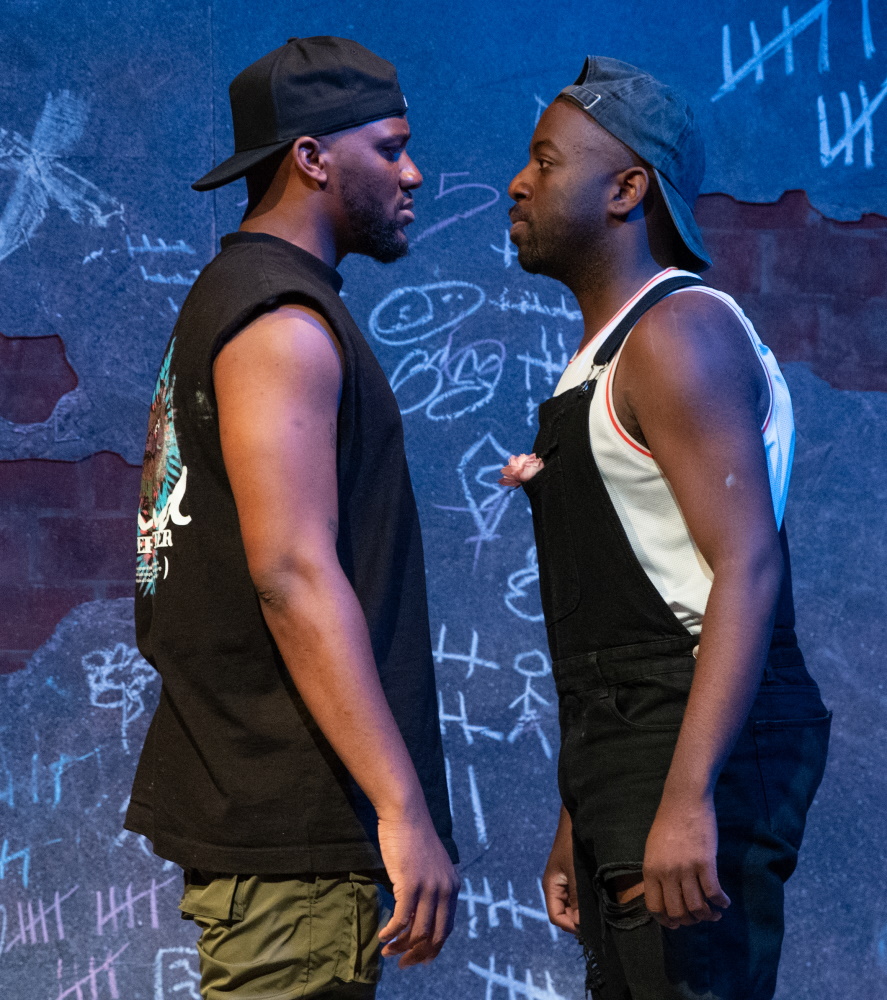 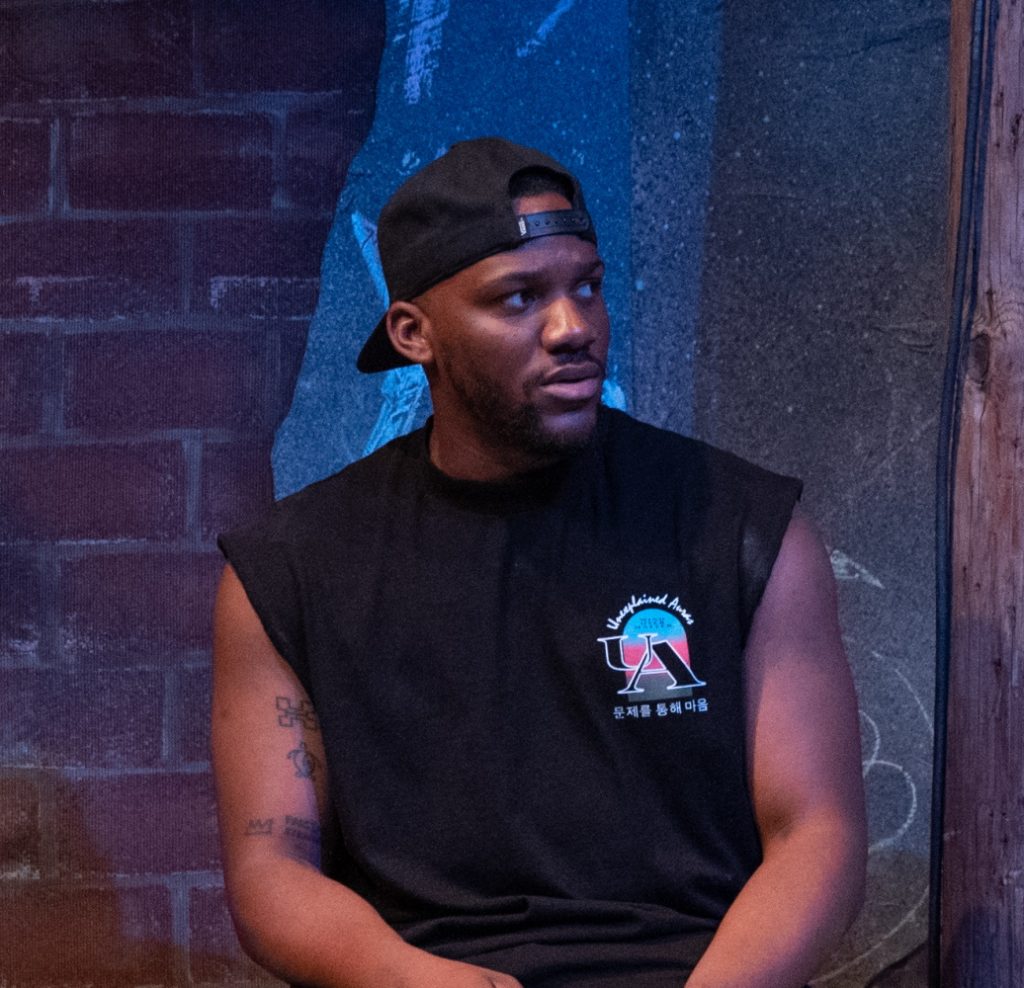 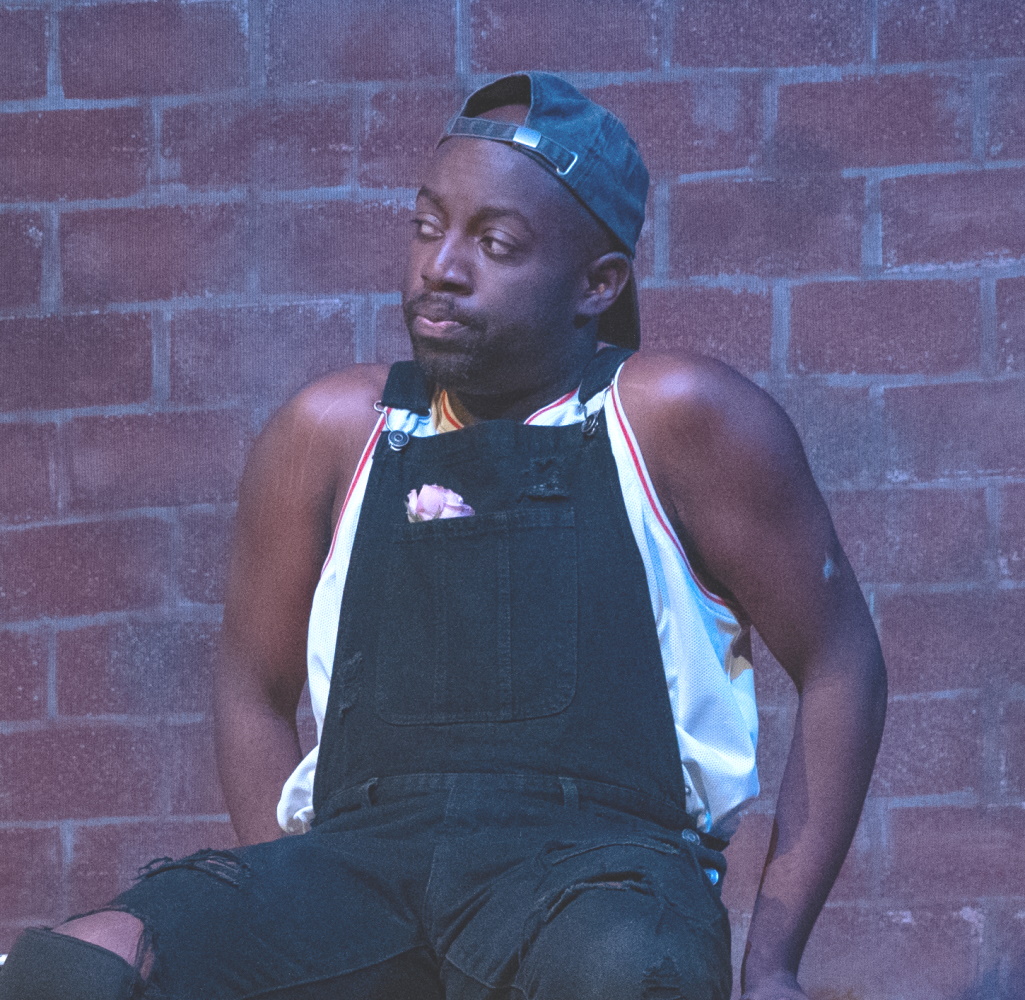 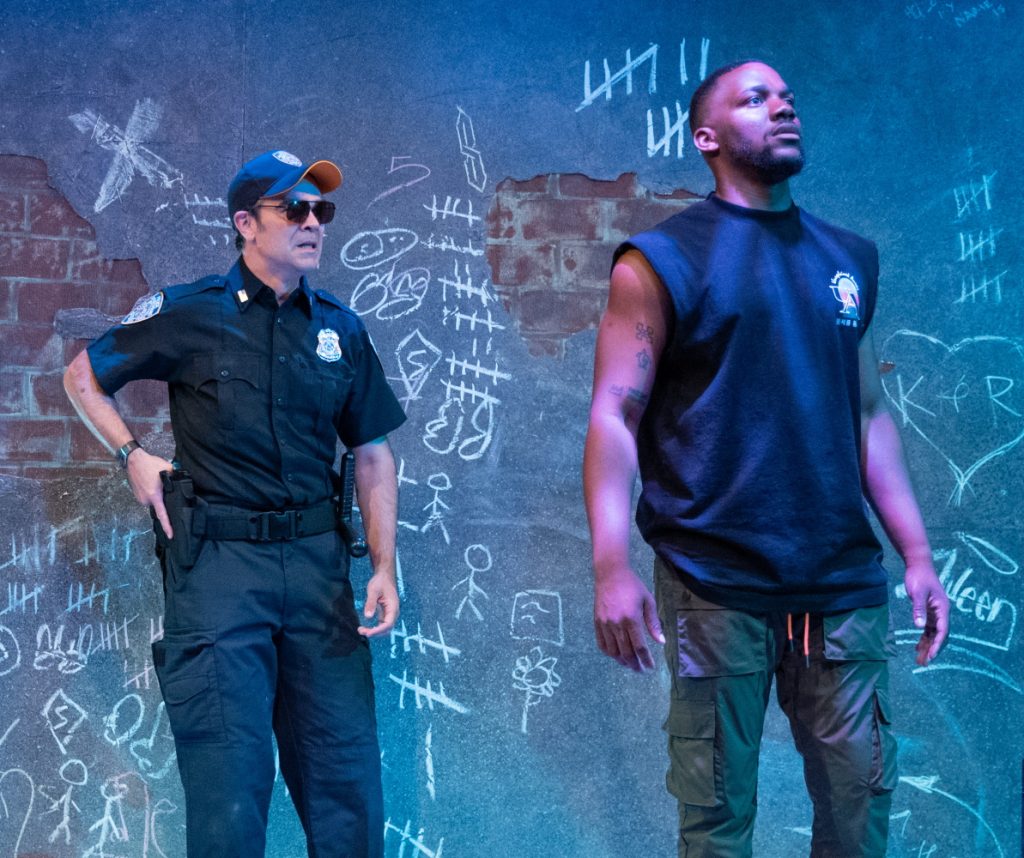 By coincidence, two plays now running in our region center on pairs of Black brothers, one bonded by blood, the other by circumstance. Hymn, now playing at Shakespeare & Company,  is a study of class and family framed as a bromance. Pass Over, at Chester Theatre Company, is a riff on Waiting for Godot set on an urban streetcorner. Both offer reflections of Black lives not often seen around here, presented by theaters determined to make a difference. Both are worth a visit.

Hymn was one of the most eagerly awaited productions on my summer schedule. Its author, Lolita Chakrabarti, wrote Red Velvet, which S&Co produced seven years ago – an all-time season highlight about the first Black actor to play Othello. She wrote it as a vehicle for her husband, Adrian Lester, who also starred in Hymn’s premiere in London last year.

The British press raved almost unanimously about Hymn, and I’m sorry to deliver a minority report. I found the play frustrating, its flaws only magnified by a flawed production, despite a matched pair of strong performances.

Chakrabarti is English, but both of her plays are about Americans, and in Hymn not all her dialogue rings true. It takes place in Detroit, where two middle-aged men, Gil and Benny, meet at the funeral of Gil’s father and Benny reveals he’s the dead man’s son too, product of a brief affair shortly before Gil was born. Gil, having inherited the thriving family businesses – stationery and dry cleaning – is flush with money and ambition, but still feels overshadowed by his successful older sisters. Benny, raised by his single mother, is tied to a dead-end job but happily married with three kids (jazz-themed Louis, Miles and Ella). 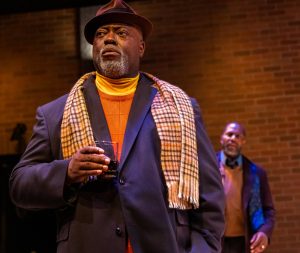 The play follows the progress of the two men’s sudden connection over the course of a year, from Gil’s reluctant acceptance of Benny’s existence to another funeral at the end.

The title reflects an implied metaphor, cued by the ticking of a metronome. As Regge Life put it in his director’s note, Benny and Gil are “two tuning forks that struggle to find harmony, a sweet sound that slowly builds into the symphony of just one family.”

My problem was that there’s not enough evidence of either the “struggle” or the “build” in their relationship. Gil accepts the DNA evidence of their blood-tie without a murmur and Benny accepts Gil’s invitation to join him in a frankly cockamamie business venture – a high-fashion clothing line with matching high-end stationery – without a Really??

The actors are hampered not only by the script’s puzzling turns but by the director’s drive toward feelgood moments and line-by-line pacing, at the cost of tension and momentum. (At 95 minutes, this staging runs palpably longer than London’s.) The play’s key scene, a hilarious set piece where the brothers dive into a memory box of outrageous clothes and the soul and hip-hop hits of their ’80s youth, is simply a celebration instead of a turning point. And the ending is more sentiment than closure. 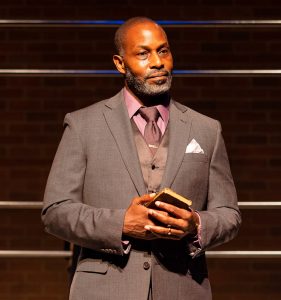 The production is saved – more than saved – by two sensational performances. Gil is played by Kevin Craig West, smooth and suave in his tailored suit, uncomfortable in his eulogy to his overbearing father, then too effortlessly comfortable with his unexpected brother. 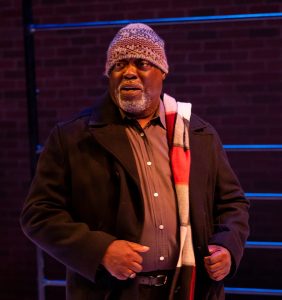 Benny is played by the actor known as “ranney” (quotation marks included) – rumpled, a little downcast, but clear-eyed (after an opening drunk scene) until he falls in with Gil’s predictably disastrous scheme. Of the two, “ranney,” who played in Art here last year, was the one I kept my eyes on. He’s also a stand-up comic, with an alter ego called Mr. FunnyBlackMan, but here he’s no clown. His face and body reveal a world of feeling as he navigates Benny’s journey into the life he deserved but never had.

Godot in the ghetto

Earlier this week, Chester Theatre’s Daniel Elihu Kramer sent an email to subscribers and supporters, making the case for Pass Over, which opens tonight for a two-week run. 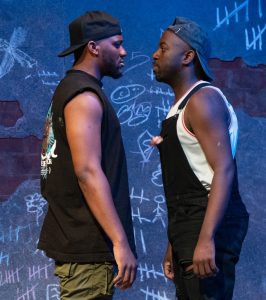 “I’m going to be honest with you,” he wrote. “When we do plays centered around Black characters, our audiences are smaller” – a fact that’s not unique to Chester. “The play asks a great deal of the artists working on it. It asks much of its audience too.”

In a PS, he added, “If you or someone you know wants to see this play and finds ticket prices an obstacle, just let me know. It will be my pleasure to provide them tickets.”

Antoinette Chinonye Nwandu’s Pass Over is the play that reopened Broadway last summer. The parallels to Waiting for Godot are intentional and unmistakable: two aimless souls suspended in a timeless wasteland, passing the endless cycle of days with ruminations on their situation and idle thoughts of escape. 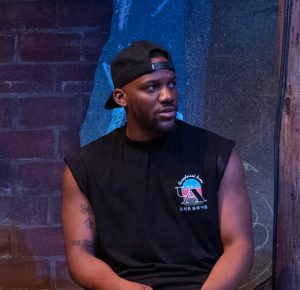 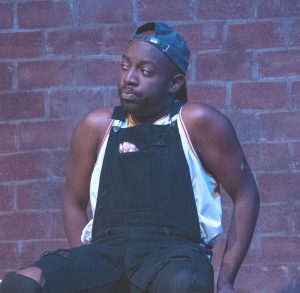 They are Moses and Kitch, young homeboys, played by Kayodè Soyemi and Austin Sasser. In the character descriptions, they each symbolize two other emblematic figures, echoes of slavery times past. Moses is “also a slave driver … also the prophesied leader of God’s chosen people.” Kitch is “also a slave … also one of God’s chosen.”

The dialogue is written in the Black argot and rhythm of the street, the N-word punctuating nearly every utterance as a tender of brotherly affection. (There’s a funny-awkward exchange about it with a white man called Mister, who is lost in the city, a fresh-faced naïf, “also a plantation owner … also Pharaoh’s son.) 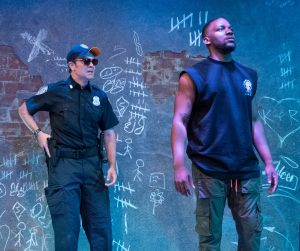 When Pass Over opened in New York, Nwandu changed the violent ending. Kramer told me that he and director Christina Franklin “understand the playwright’s decision to make a different outcome for the characters in the Broadway production. We had extended conversations about which version she would use.” You’ll have to see the show to find out which option she chose.

You’ll also have to see Hymn to decide how my minority opinion stacks up against the majority of critics’ responses.

Both these shows make key contributions to today’s reviving theater scene. As one of Godot’s two tramps says, “Let us do something, while we have the chance!”