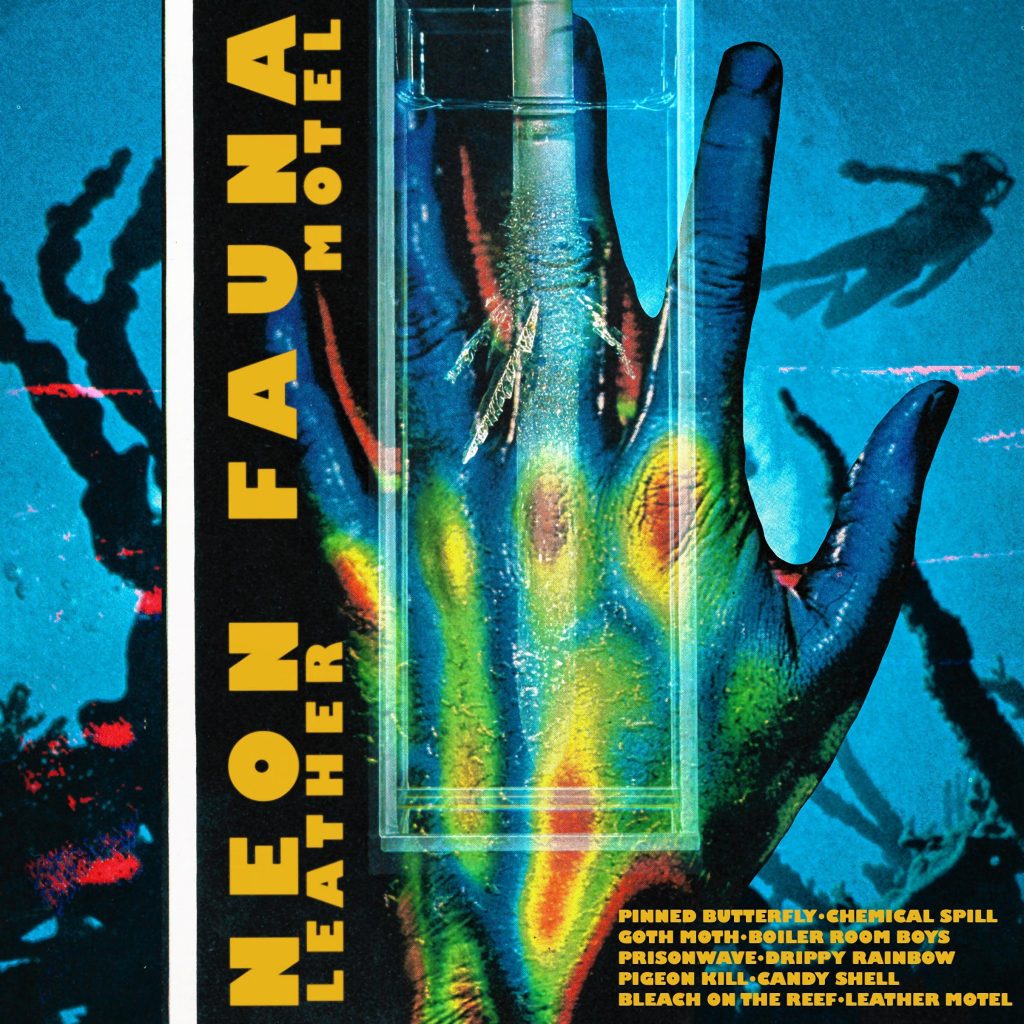 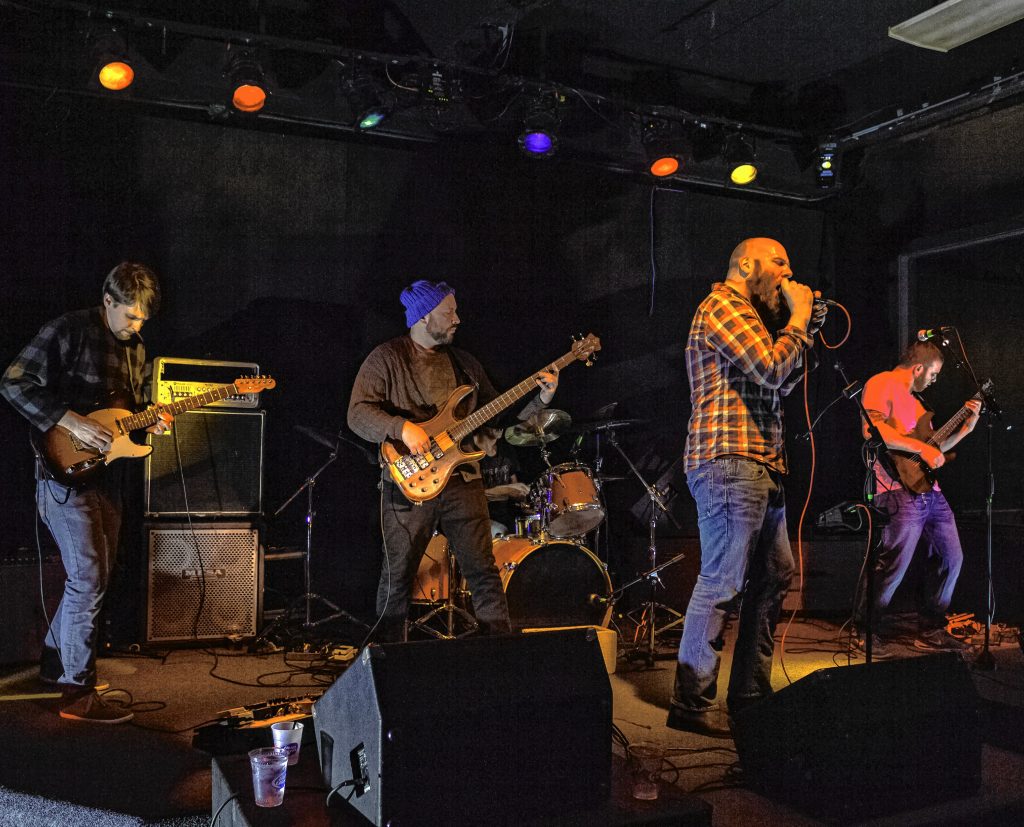 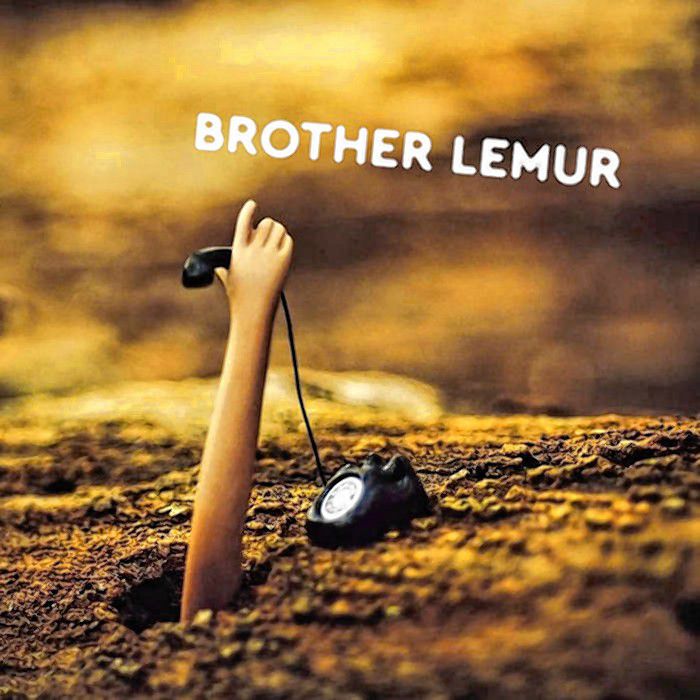 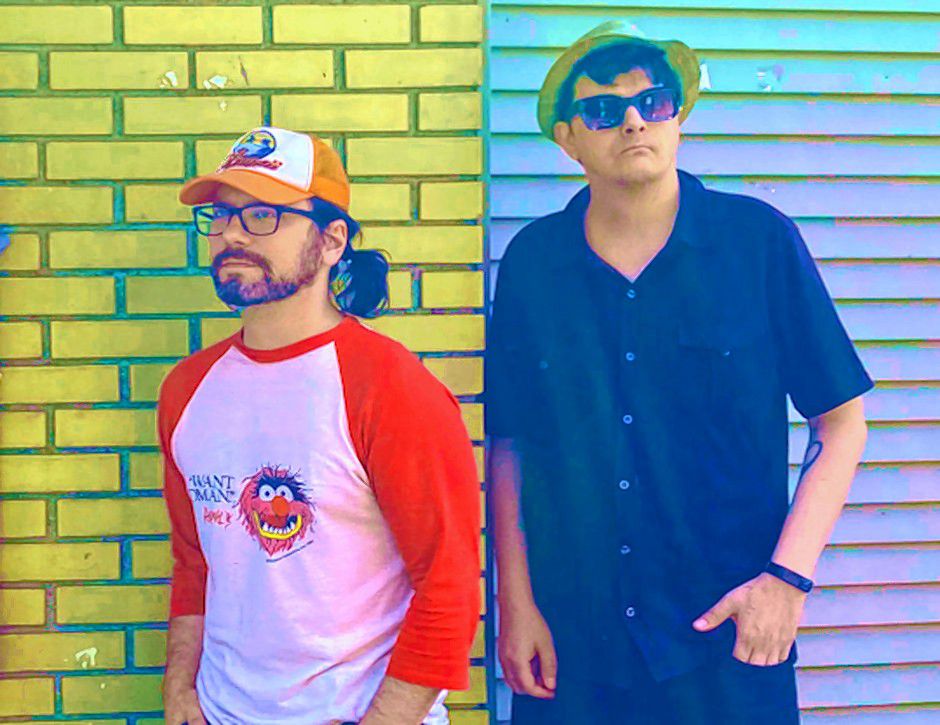 “Pinned Butterfly” the opening track and first single off of Neon Fauna’s second full length album Leather Motel sets the energetic mood immediately with this experimental album. When I say experimental, it’s not just in reference to the genre in a rock/punk sense, but also experimental with how it was produced.

The band had written almost all of the album prior to March 2020 – Covid-nation. When the hopes of getting into a studio to record in April of that year was taken away with the lockdown, they came up with an idea to continue with the recording, but in a more remote-world way. After some experimenting, each band member decided to record their entire album separately, each in their own DIY home studio. “This ‘guerrilla style’ approach and lack of professional gear or producer gave the album its raw, unorthodox sound,” the band said.

I’d recommend playing this album in your earbuds … it is intense. The amount of layers in each track, by each instrument and the experimental sounds mixed in makes it almost hard to believe that it was done by the five musicians in five different places all in different times, then pieced together. A work of art that emerged from such a terrible time in recent history.

“Chemical Spill” makes me want to go to a show. It keeps that energetic feel going. Good luck listening to this album while sitting or standing still.

I’m a huge fan of all of the poetic song titles, but “Moth Goth” got me. I want to adopt a cat with black eyes and a gray and white body and name them Moth Goth. This track has an electric feel to it, hairs standing on end. I picture that moth dancing in the dust-filled pulsating light paths, fluttering its wings to the beat of the track. Light my new obsession / Flight in one direction / Blind new navigation / I rely on your light.

“Drippy Rainbow” feels like it needs to be an anthem song. Yea give me the zero / I know the answers / Guess I’m just a drippy rainbow / With too many heroes / Yea you made it metal / Now bow your master / And every new pulse that it takes is / manmade disaster / Gimme the zero.

The psychedelic overtones are very distinguishable throughout. Each track has its own visuals that project from whatever device you are listening to it through. “Pigeon Kill” reminds me of a song that should be in a trippy horror movie where the soundtrack is better than the movie, but there are still some notable scenes.

Otherworldly vibes on “Candy Shell.” At 02:05, that guitar solo had me swooning. The crazy amount of layers of sound in this one is creatively executed. It’s like … “is that a pick being dragged up the guitar strings; is that rain hitting a metal roof; is that part of ‘Twin Peaks’ intro in that last note?” Imagination runs wild in this track.

You can hear the colors in “Bleach on the Reef,” like a kaleidoscope. It’s also the longest track on the album at 06:23 minutes. It is a continuous trippy, psychedelic adventure. Title and ending track, “Leather Motel” is a perfect way to close this masterful album. You can hear singer/lyricist Tony DeNucce’s vocals the clearest, standing outside of the other instruments.

Their mission statement for the album is “the music of the Leather Motel lives as a testament to art and its healing power, even in the darkest times.”

Leather Motel is available on CD and download at neonfauna.com. You can catch them live Friday, October 28 at 8 p.m. at Hutghi’s At The Nook, 8 Franklin St., Westfield.

The debut album from duo Brother Lemur is a nostalgia-feeling rock album. If this were to have come out in the mid-late ‘90s it would have fit in nicely with The Flaming Lips, Blur, Pixies and Radiohead, touching on many hints of different rock styles — indie, alternative and even some classic rock vibes come through.

Written about 10 years ago by Jay Dorval, the songs went through numerous musicians throughout the years trying to bring it to life, but nothing worked out. He had originally asked Eric Cunha earlier in the process to mix the album when finalized, but when the last musician bailed, they decided to do the project with just the two of them.

“That became the best decision for the collection of songs I ever made,” Dorval said. “He breathed bright colors and animation to them because of Eric’s ability to hear what they needed.”

Dorval sang and played rhythm guitar while Cunha was the backing band. “He had six songs he wanted me to mix, and eventually we decided eh, let’s scrap it and start over,” said Cunha. “Six songs turned into 12 over a couple months’ time. I’d record him at his apartment, then take the tracks home and add around them.”

Opening track “Bumblebee” kicks the album off with an interesting sounding percussion. Cunha had told me it was an empty W.B. Mason box being hit on the lid by a roll of duct tape. Which queues up the artful dozen of songs.

The entirety of the album includes songs of “intense love, anger, a lifelong history of bad decision-making and a dose of trying to be normal in the midst of absolute dysfunction,” Dorval added.

“Gumdrop or Different Dog’s” is about an awful person that both of them knew from their hometown of Chicopee. It’s such an upbeat, happy song too. It’s almost like that old saying, kill them with kindness, the last blow.

Little past midway through the album comes “Nadia,” which is a short-lived track at just under two minutes. The voice is distorted and droning, adding this ominous feel that is almost nightmarish. The lyric I will never be afraid again just adds to it. I wish it was longer, a circus-like obstacle with those scary mirrors, but lasting a little longer trying to find your way out.

“Grizzly Days” was a song that Dorval had come across on his handheld recorder nearly four months after he recorded it. “I recorded it so drunk I had no memory of it,” he said, “but it was fully fleshed out vocals that worked and all in one drunken stream of consciousness.” It’s a really sad sounding song that has some strong harmony’s strung through that makes it less sad, and more comforting.

One of my favorite tracks on the album is “Purple Flowers.” Starting off slow and quiet, the lyrics Don’t ever change who you are become like a mantra. The layered guitar sounds in this one and vocals are intertwined smoothly together leading up to a heavier ending.

The final track “D.B.F.” was recorded in one take on Dorval’s phone, then Cunha took it and added some magic. Up all night again talking to my dead best friend. The crickets in the background were recorded along the Connecticut River from the boat ramp to Nash Park. The inspiration was from Neil Young’s “Will to Love.” Listen to these songs back-to-back and they complement each other very well.

They are in the process of finding a live band to perform the songs, but in the meantime you can check them out on Bandcamp, Spotify, YouTube and Apple.