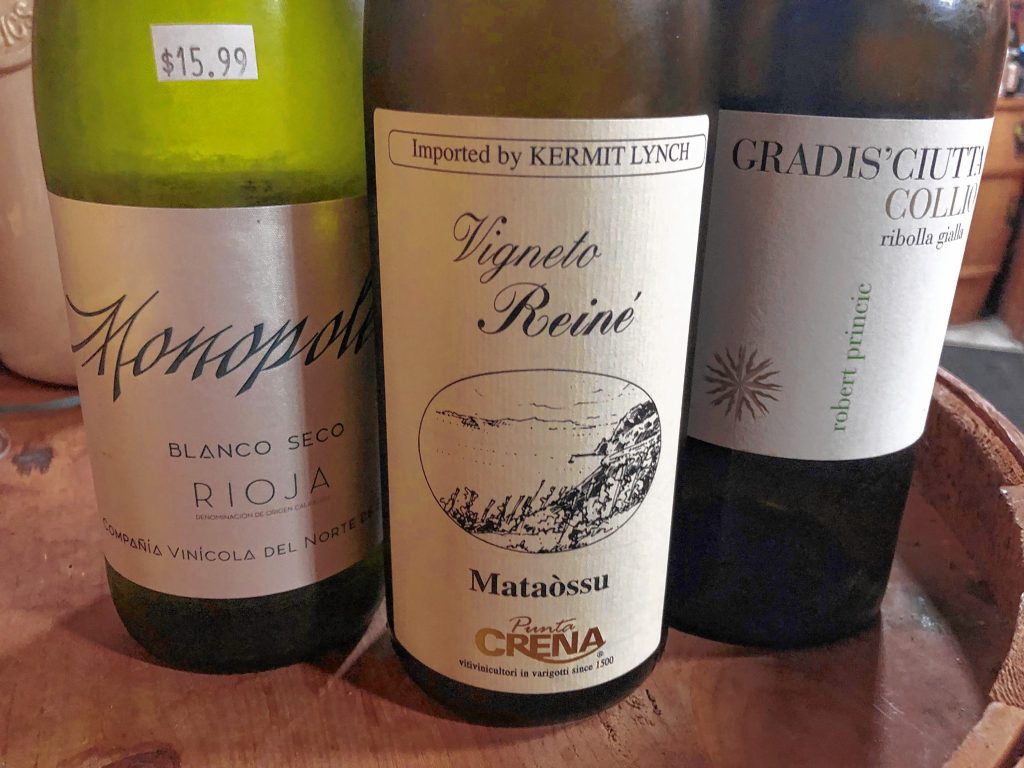 Two of the three white wines described in this column that will assuredly help break you out of a white wine rut without breaking the bank. At left is a wine called Vira, grown in a town called Haro in Northern Italy, that goes for $15.99. At right is a “unicorn” wine called Mataòssu, grown on the Ligurian coast of Italy. It goes for $24.99.

While I am absolutely not sick of any of my perennial and predictable shawarma, clam, or burrito choices, I do like to change things up when it comes to wine. Though, occasionally, I do get stuck in wine ruts. I had an early Zinfandel phase. A Riesling rut. A cheap sparkling phase. I’m coming out of a non-Pinot Grigio Italian white phase. But I do try to keep an eye open (or, I guess, mouth open) for new and exciting wines to try. Especially, if it’s something I’ve rarely or never tasted. And most especially if that “unicorn” wine is reasonably priced. During my weekly radio wine-tasting segment with the “Wine Snobs” at State Street in Northampton (Friday mornings at 7:40 on 93.9 The River!) I was excited to try three wines made from grapes that I had either little or absolutely no experience with. And, given that I’m coming out of a non-Pinot Grigio Italian white phase, I was excited that two of them were rare Italian whites. But first, to Spain.

If you are at all familiar with the Spanish wine region of Rioja, your first thought is likely to be “red.” The most common red grape of Rioja being Tempranillo. But Rioja, like most of the famous wine regions of the world, has an overshadowed white wine analog. White Rioja, or Rioja Blancos, is not as common a name in most U.S. households. It’s called Viura. The Viura we tried was from northern Rioja, grown in a town called Haro. Viura is vinified by Compañía Vinícola del Norte de España, or C.V.N.E., a fifth-generation, family-run wine company that has been making wine since the late 1800s. They registered their Viura under the name “Monopole” back in 1915, and now boast that they have “the white wine with the oldest registered name in Spain.” They are claiming the monopoly on Monopole.

Lots of white wines have citrus or lemon notes, but I was impressed that this one tasted more like lemon meringue than straight up lemon. And while this wine had a good acidity, the astringent edge was taken off by whatever is making the wine meringue-y. Their winemaker, Ezequiel García, is nicknamed El Brujo which means “The Wizard,” so I’ll assume he is using magic to make the meringue. At an affordable $15.99, this is a low risk wine to get you out of whatever white wine rut you may find yourself in, and get you into a bottle of something new.

Something new, like Ribolla Gialla. Ever heard of it? Me neither. But this rut-busting uncommon grape choice takes us to the Northeastern reaches of Italy, near the Slovenian border, where the Princic family has been making wine since the late 1700s. Their Gradis’ciutta is made from the rare (to us) white grape, Ribolla Gialla, the oldest known grape variety in the region.

The bottle itself indicates you are about to try something unusual. Rather than the familiar broad shoulders of a Bordeaux bottle, or the oft-seen slender shoulders of a Burgundy bottle, or the tall and slim look of a German-style Riesling bottle, this bottle is odd. It’s like someone cut off the top of a normal wine bottle and fused a glass funnel on top. It’s the kind of bottle where, if someone put a ship in it, you’d think they cheated. The bottle is squat, and angular, and, somehow both round and boxy.

But the wine itself is delicious. I mentioned how lemon is not an uncommon white wine descriptor. There is, of course, no actual lemon in any white wine worth drinking. It’s all the tomfoolery and trickery of the transformation of fruit to alcohol, and the chemical compounds confounding our senses. This wine smells like lemon, but more like rotting lemon. Why on earth would someone want to drink something that smells like rotting lemon? I have no idea. But I did drink it. And I want to drink it again.

Remember, there is no actual rotting lemon in this wine. There is also no straw, or diesel fuel. But it’s all stuff I smell in this delicious wine, made in the hills of Collio. Before this family changed the surrounding area’s name to Gradis’ciutta, it carried the name “Monsvini,” which is Latin for “Mount of Wine.” And thar’s gold in them thar hills. Golden, crisp, straw, diesel, rotting lemon wine from a grape you probably never heard of, let alone tasted. Ribolla Gialla. And again, at just shy of $20, it’s a risk worth taking when you decide to break out of your California Chardonnay habit.

The last selection we tried was a unicorn. No, not a single woman willing to have sex with me and my wife (look it up). But a wine so rare that the maker claims to be the only person on Earth who grows it. The wine is made from a grape called Mataòssu, which the winemaker, Paolo Ruffino, grows in Punta Crena on the Ligurian coast of Italy, 1,000 or so meters from the Mediterranean. The Ruffino family has been making wine here for half a millennium and claim to have rescued this ancient grape.

Despite what a few of his neighbors say about their Mataòssu, Ruffino claims that his is the only real deal. This wine is imported by one of my favorite wine merchants, Kermit Lynch. And according to Lynch’s newsletter, Ruffino’s neighbors are growing another rare grape called Lumassina, which is a close relative of Mataòssu. And the wines that the neighbors are bottling and labeling as Mataòssu is actually Lumassina. Still others claim that Mataòssu and Lumassina are both the exact same grape.

This type of argument over minutiae is so stereotypically Italian that I love it. I bet these families never talk to each other anymore. We Italians really know how to hold a grudge and keep it. Most wine guides list the total land worldwide dedicated to growing Mataòssu at about 10 hectares. If you believe Ruffino, it’s only 2 hectares. A hectare is 2.471 acres. The fact that, for $24.99, you can drink this extremely rare grape, rescued from extinction by an ancient winemaking family, and only planted on 5 acres on all of planet Earth, it’s like meeting a unicorn. And this time I do mean a single woman willing to have sex with me and my wife because this type of unicorn could, theoretically, exist.

Sadly, the other type of unicorn doesn’t exist because Noah abandoned them. The unicorn wine Colline Savonesi Mataòssu Vigneto Reiné from Punta Crena exists. It is floral and funky and smells and tastes more like a Spanish cider than a wine. I was physically aroused by the scent and it sent chills through my whole body. And damn, it’s fun to find something new and exciting to break you out of your old routines.