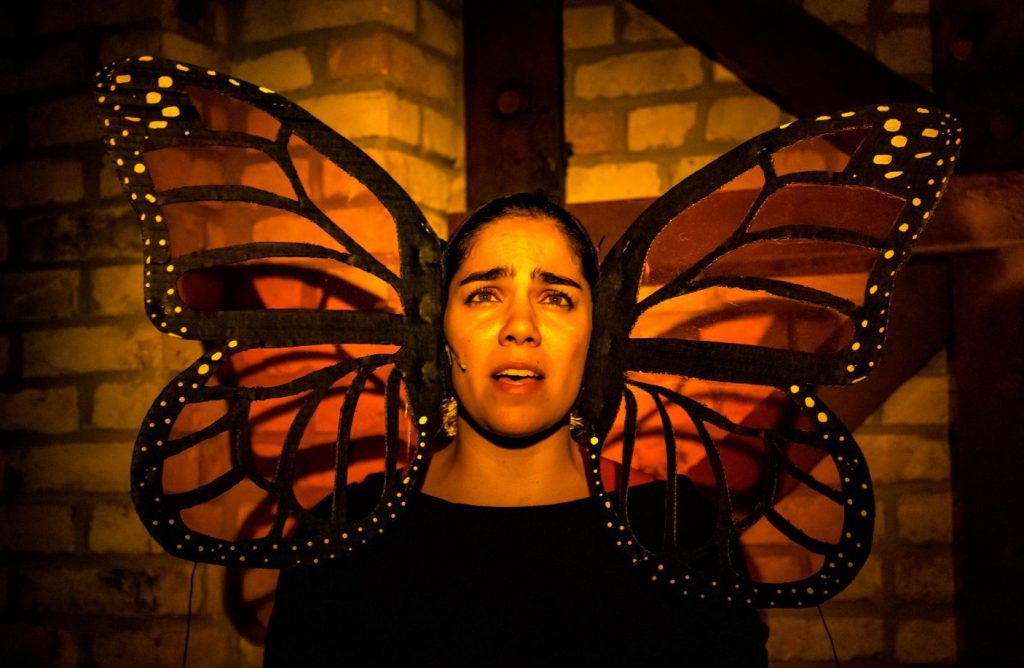 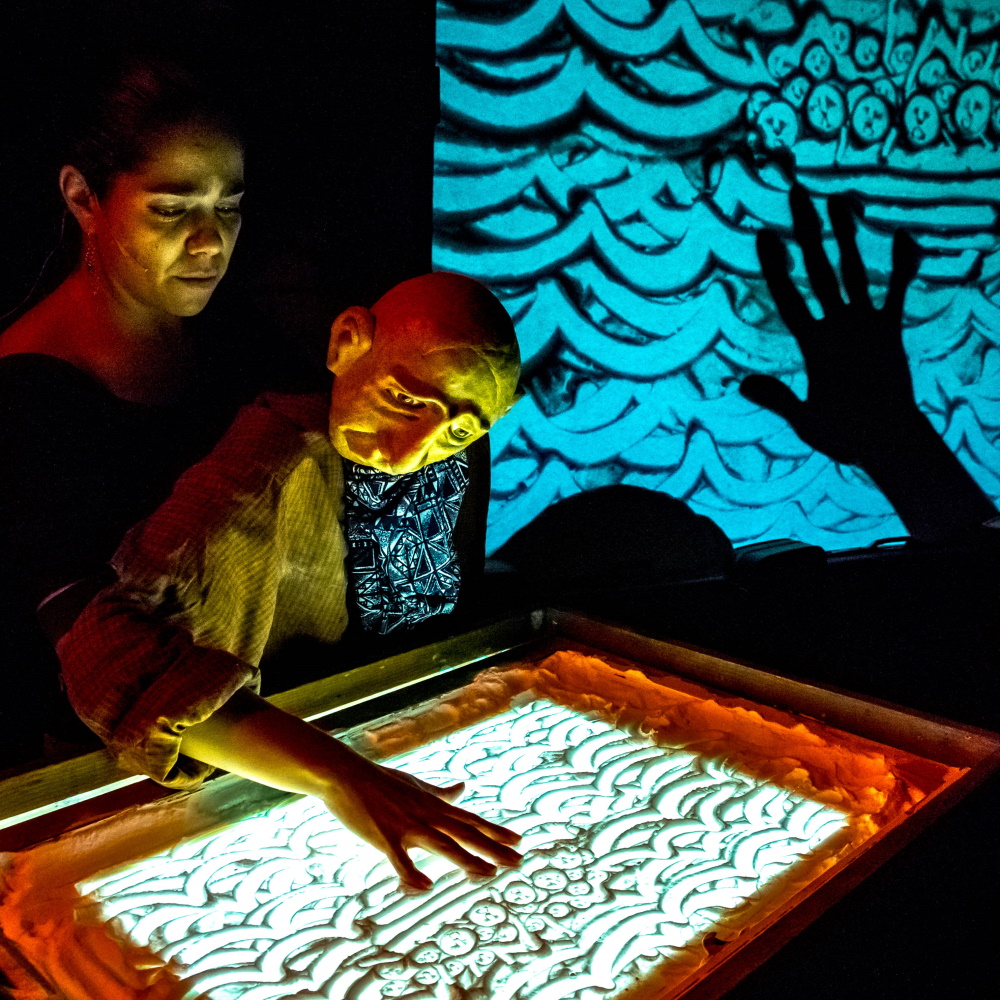 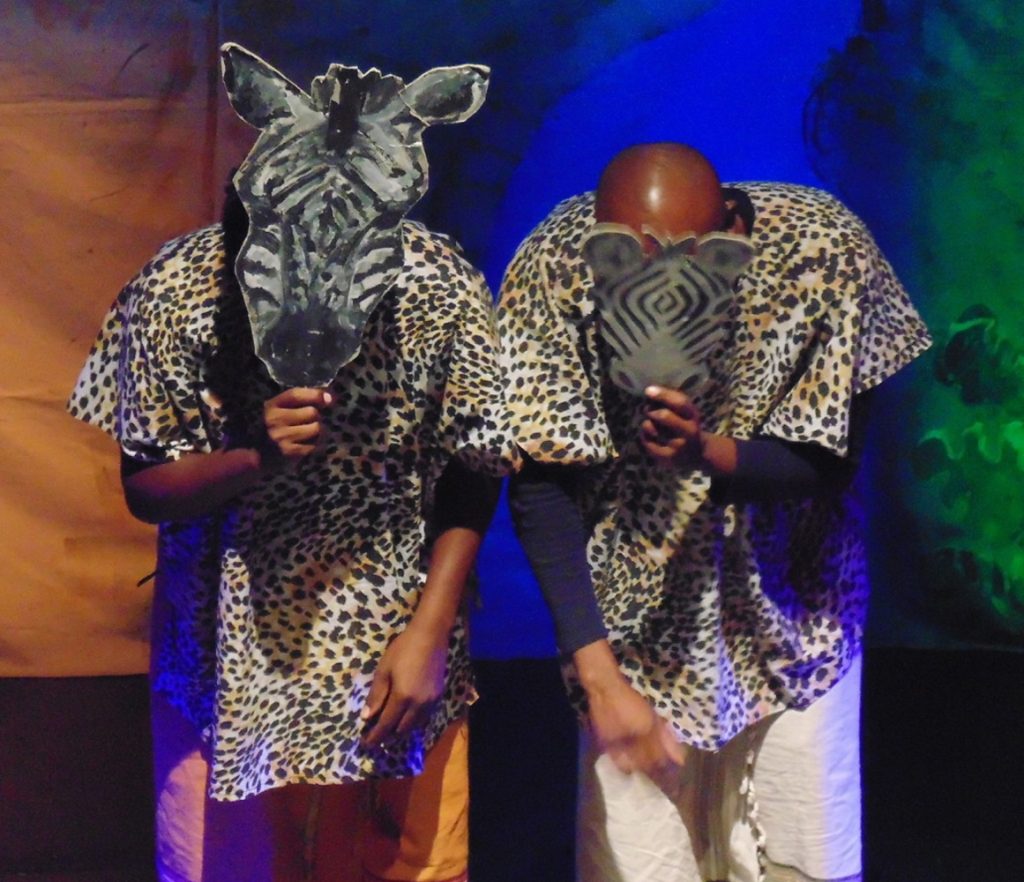 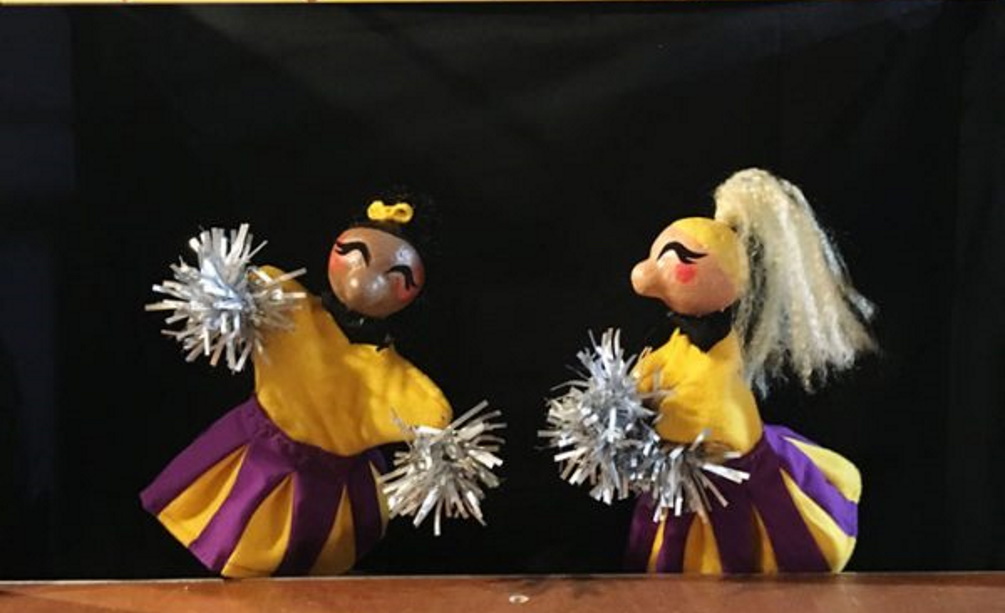 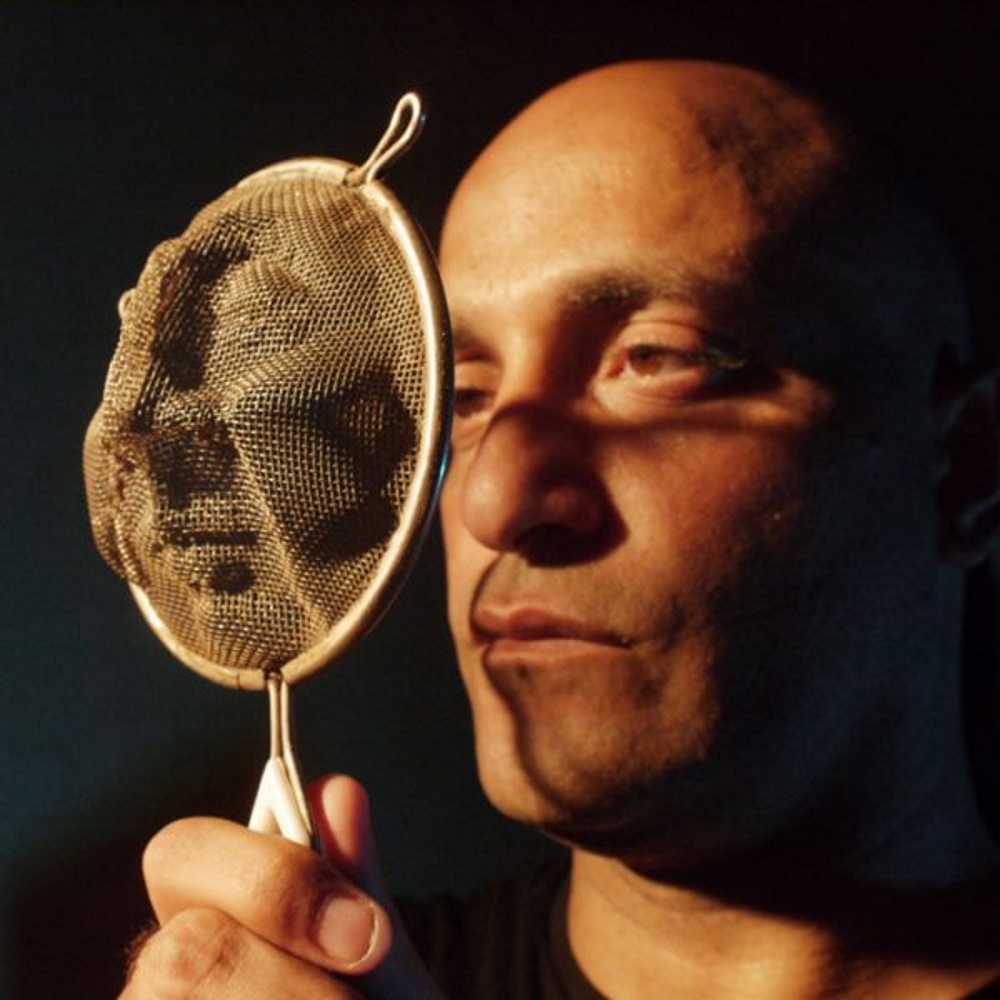 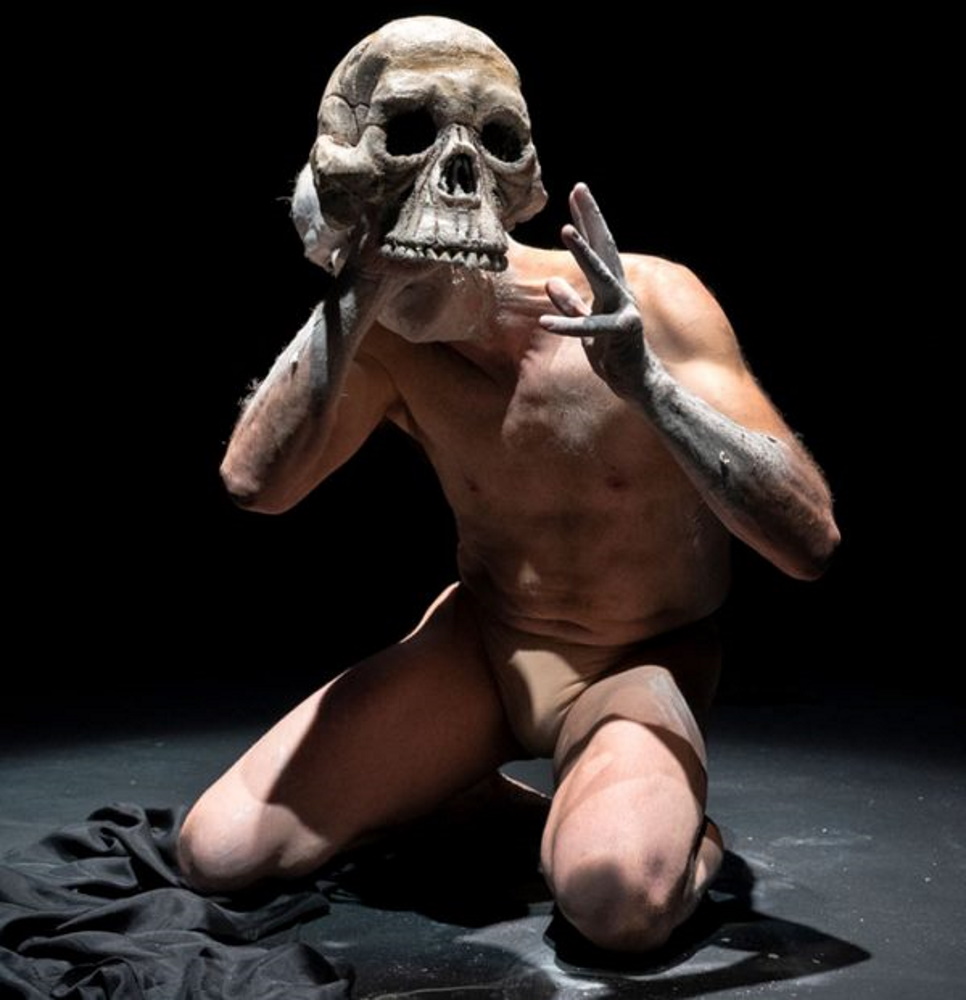 The title of the Puppets in the Green Mountains festival that was supposed to happen two years ago came from Goethe: “There are two things that parents should give their children: roots and wings.”

Sandglass Theater’s biennial puppetfest revives this month, after the Covid-enforced hiatus, with the same theme, Roots & Wings, now even more apt. The festivities now mark the 40th anniversary of the Putney, VT-based puppetry powerhouse – those roots run deep – and the final stage of a leadership transition from Sandglass founders Eric and Ines Bass to their daughter, Shoshana Bass – taking wing for the theater’s next flight.

The first weekend featured a magical, wrenching performance by Paradox Teatro, a U.S.-Mexican duo that epitomizes the festival’s international focus and whose show, Migraciones/Migrations, embodies the festival theme. 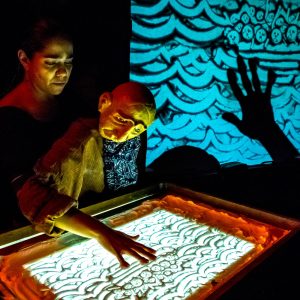 Using sand drawings, video projections and a life-size puppet, Migraciones/Migrations reflects on the people who undertake terrifying journeys in search of safety, taking flight in hopes to putting down new roots.

The stage is piled with battered suitcases and flanked by two lightboxes whose images are projected on the upstage wall. At one of the tables, Sofía Padilla holds Rubén, his expression half mournful, half alarmed, his arm an extension of hers as she traces images, at once simple and profound, into sand scattered on the glass: sun-baked desert, faces in a truckbed, a wall crowned with barbed wire stretching to the horizon.

At the other table, Davey T Steinman manipulates shadow puppets – lines of soldiers, lines of migrants – and makes staticky Skype calls to his wife across the border. In this reality, the couple are separated by geography and circumstance, she helping Rubén document their people’s journey, he waiting, helplessly hoping, in the U.S.

It’s a visually entrancing and deeply affecting production that resonates with the festival’s theme: lives torn up by the roots and cast into flight. The final image is a butterfly, winging doggedly toward hope.

This weekend the festival concludes with a half-dozen more performances around Brattleboro, together with a slate of hands-on workshops, community dialogues and special events.

The most special is Thursday’s 40th-anniversary gala celebration, followed by a performance of Flushing: Make Room for Someone Else, the meditation on artistic leadership and transition that Eric Bass and Linda Parris-Bailey premiered at this summer’s Ko festival.  There’s also an online mini-festival of short puppet films “for folks who want to engage at home.” 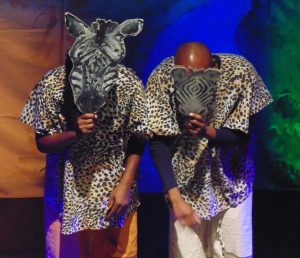 Performances are divided into shows for “adults” and “families.” Among the latter are Tears by the River, from Krystal Puppeteers of Kenya, employing masks, drums and chants in a “musical folktale” about a winding river’s roots and timeless power.

In Judy Saves the Day! puppeteer Sarah Nolen enacts a modern feminist version of the classic, and classically sexist, Punch and Judy show.

In the adult category, the Jordanian/Czech Dafa Puppet Theatre presents War Maker, recalling the true story of Palestinian artist Karim Shaheen through his “dreams and delusions” over a lifetime of war and exile. 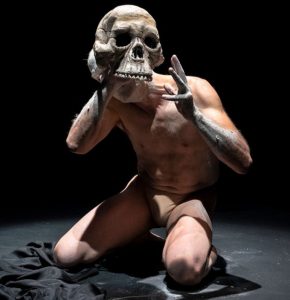 Body Concert, by Lone Wolf Tribe of Brooklyn, is a wordless, Butoh-inspired exploration of “life’s beautiful impermanence” in which founder/director Kevin Augustine uses his entire body to animate a collection of foam-rubber puppets, accompanied by an electroacoustic score.

Photos courtesy of Sandglass Theater and the artists