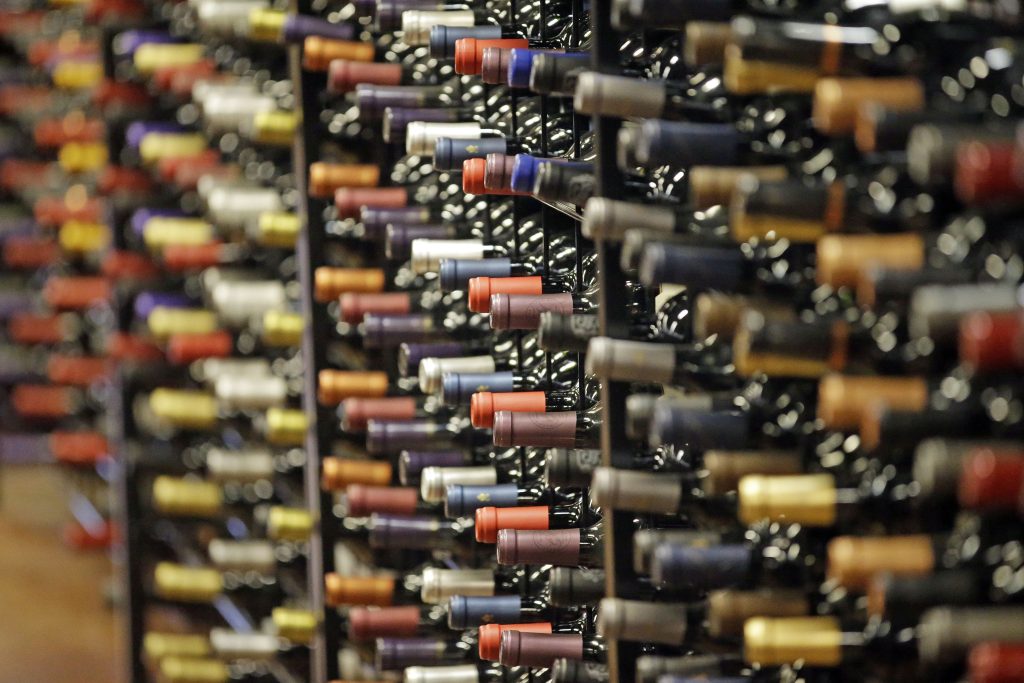 Bottles of wine on display.

While getting out my glasses (wine glasses, not reading glasses) and preparing to write this column, I had a new email message from the mailing list of Four Seasons Wine & Liquors in Hadley. While most of their subject lines read “For The Woman You Love: Wine SHE’LL Love” or “Wine Tasting Party: Benefit for Hadley Senior Center,” this particular missive caught my attention with the subject line “Yes on 3 For Safe and Convenient Expansion of Alcohol Sales.”

Just a few hours later my inbox had another unread message from a listener to my radio show, Susan Triolo from Sunderland:

Later that same afternoon, I walked into Connecticut River Liquors on Avenue A in Turners Falls and, there on the door, was a poster imploring their patrons to “Vote Yes on Question 3.”

It seemed like Baccus was trying to tell me something. I put the glasses away and changed course with the direction of my wine column to take a deep drink of Question 3. I already have well-informed decisions as to how I’m going to vote on questions 1, 2 and 4 on the Massachusetts ballot on Nov. 8 (it’s “yes” to them all, if you are curious) but all of these recent messages from listeners and liquor stores exposed my woeful ignorance about the details of Question 3.

So, I began at the Secretary of State’s Office website where Question 3 reads, in part:

The petitioners who initiated in this instance are the 21st Century Alcohol Retail Reform Committee, who are a Super PAC of small- to medium-sized package stores. And of which, Sean Barry, owner of Four Seasons Wine & Liquors in Hadley is the “first vice president.” The state site continues:

This proposed law would increase the statewide limits on the combined number of licenses for the sale of alcoholic beverages for off-premises consumption that any one retailer could own or control: from 9 to 12 licenses in 2023; to 15 licenses in 2027; and to 18 licenses in 2031.

OK. I think I get that, more licenses per retailer up to a maximum of 18 in a decade. More from Secretary Galvin’s site:

Beginning in 2023, the proposed law would set a maximum number of “all alcoholic beverages” licenses that any one retailer could own or control at 7 licenses unless a retailer currently holds more than 7 such licenses.

Huh? I thought they just said they were jumping up the number from 9-12? Where did the “7” come from? When I look at the “Yes On 3” site they say that full liquor licenses would be limited to 7. Beer and wine licenses could eventually jump to 18. Now I got it. Back to the state site:

Pretty self-explanatory. If I were underage in this high-tech age I would totally try to pull a fast one and bring a bottle of hooch to the self-checkout so I didn’t get carded.

The proposed law would also add out-of-state motor vehicle licenses to the list of the forms of identification that any holder of a license issued under the State Liquor Control Act.

What? How is this not already a thing? If I were from Connecticut (God, forbid!) retailers in Massachusetts wouldn’t let me buy wine with my Connecticut license?! That sounds very frustrating. Being from Connecticut, I mean. But also, not being able to buy wine here with that license.

Since the impetus for my unpacking this question came from the “first vice president” of this package store super PAC , I wanted to hear what Sean Barry, owner of Four Seasons Wine & Liquors in Hadley, has to say about Question 3.

Sean says, “We are a grassroots group of liquor store owners and employees trying to get the word out on a limited budget. A ‘Yes’ vote on Question 3 helps thousands of Massachusetts families who own or work at local beer and wine/liquor stores. A ‘No’ vote benefits one family owned corporation from Maryland.”

This Maryland company operates a few stores in Massachusetts, but has 220 superstores in 27 states. They are called Total Wine & More. They are a total plague on small wine stores. When Total Wine comes in, the mom and pops go out.

Barry continues “Alcohol needs to be banned from self checkout. It’s not just about carding, but identifying intoxicated people and stopping two-party sales. It’s about keeping our roads safe and keeping alcohol out of the hands of our children.”

Hard to argue with that. I already admitted I would totally try and get away with self-checkout if I were underage.

And on the out-of-state-license issue, Sean says, “It’s frustrating that we are allowed to accept any passport from countries recognized by the federal government, but driver’s licenses from the other 49 states are not allowed. A ‘Yes’ vote on 3 would rectify that.”

I tried several times to get a quote from Total Wine, which also didn’t respond for a Beacon Hill Roll Call story published in the Gazette on Oct 17. I guess they are “No” on “No on 3.”

I asked a handful of other stores for their thoughts on Question 3. One responded. Wes DeSantis from State Street Fruit Store Deli, Wines and Spirits in Northampton and Cooper’s Corner in Florence, says:

“I’m happy to work and live in a community that actively supports all things local, so I’m not as concerned by Question 3 as I might be elsewhere in the state, or even the Valley. When I began my career in the wine and spirits industry, any one person or corporate entity could only have three licenses to sell alcohol for off-premise consumption. Despite industry opposition, Massachusetts expanded that to nine licenses over the last decade or so. This has led to a significant increase in larger corporate interests being involved in alcohol sales, most notably Total Wines & More.”

There they are again. But a “Yes” on 3 will totally benefit some large corporations.

That’s because cities and towns base the number of available licenses on population and don’t want to allow too many stores in a less populated area, which would dilute the licenses’ value. Wes continues, “Larger corporate interests (with larger corporate wallets) will be better positioned to be able to outlast independent stores in areas that can’t really support multiple stores, thereby becoming the only options in those communities that oversell licenses. The end result very realistically includes people such as myself being left without a job and lots of our local dollars being siphoned off to distant corporate headquarters.”

These are understandable concerns for those of us who support local brick and mortar over huge corporations. But corporate interests will always use their deep pockets to advance their interests. Given that Question 3 was proposed by small- and medium-sized players to limit those corporate interests — say, seven Total Wines in Massachusetts rather than 70 or 700 — it may be the best chance for small beer and wine stores to survive here.

Election Day is Nov. 8. I’ll be voting “Yes” on 3. I think it’s a good initiative. Plus, Barry from Four Season is, and has been, the person who assists me in pushing a shopping cart 43 miles during my March for the Food Bank, happening just a few weeks later on Nov 21-22. He is just about the most upstanding individual I know. And if I vote “No,” he might not be so generous in navigating my shopping cart around potholes. Potholes can be fixed by voting “Yes” on 1.