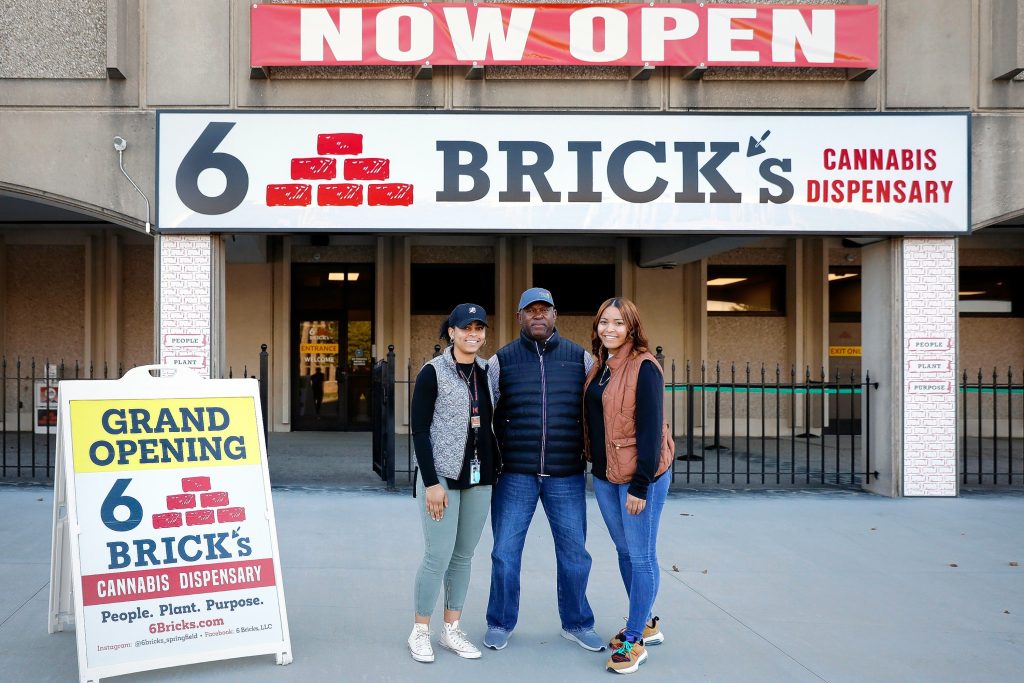 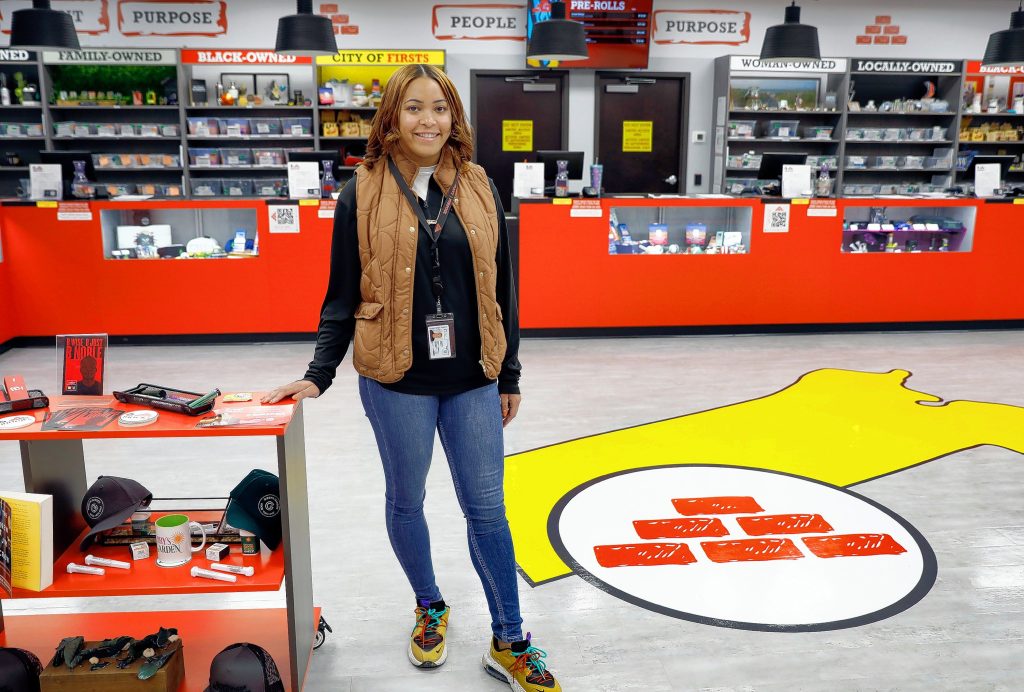 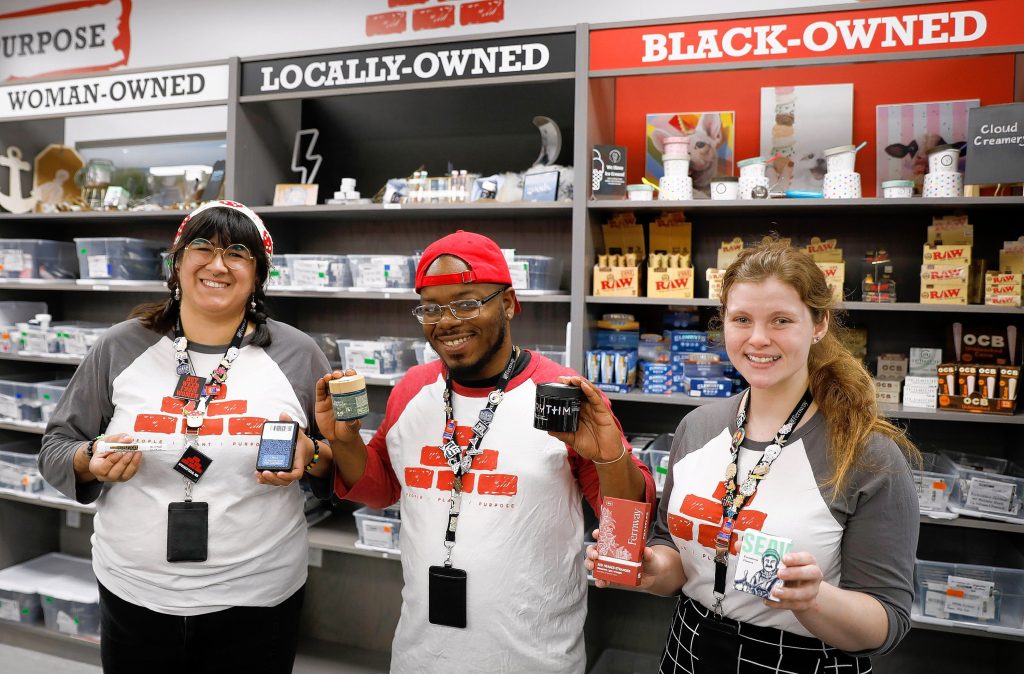 Budtenders Kennedy Layfield, from left, Trevor Hickson and Sarah Kampe show some of their favorite products at 6 Brick’s cannabis retail store on Tuesday afternoon in Springfield. 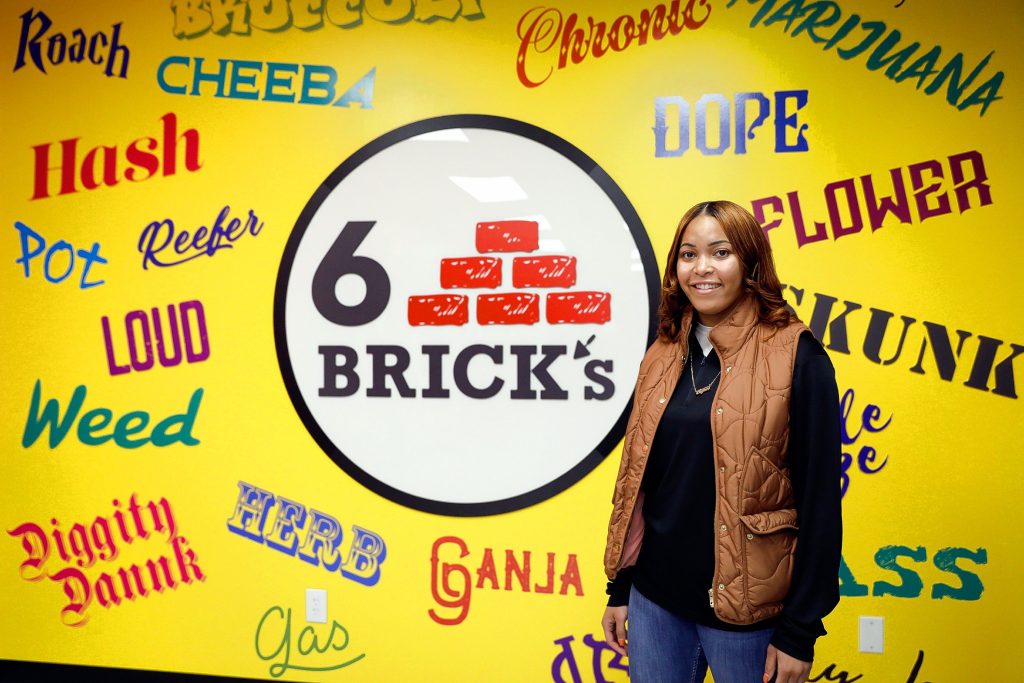 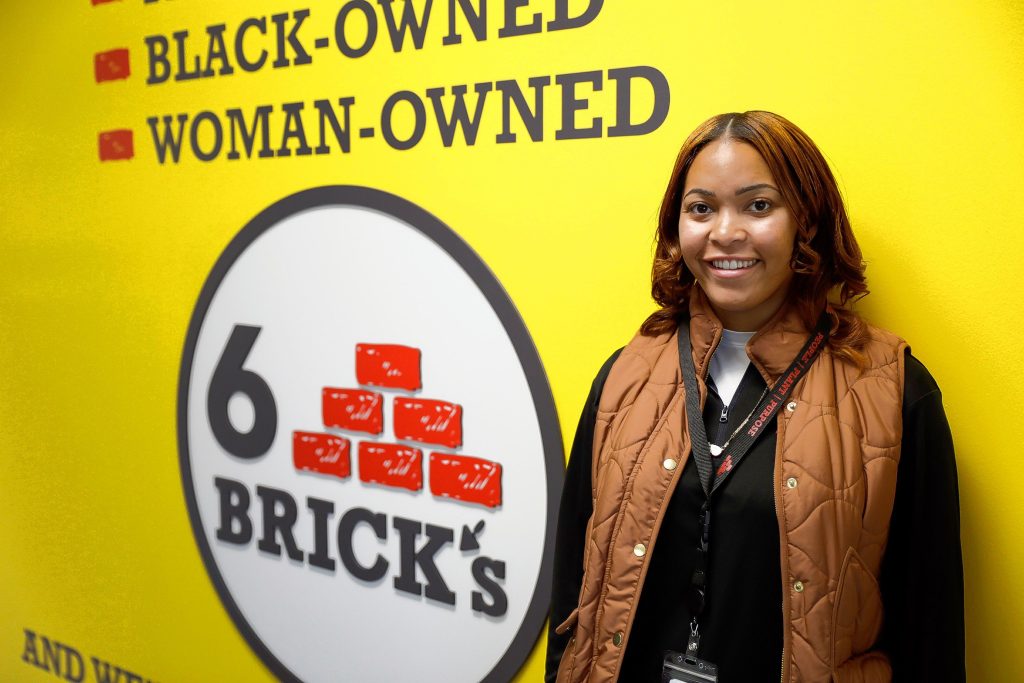 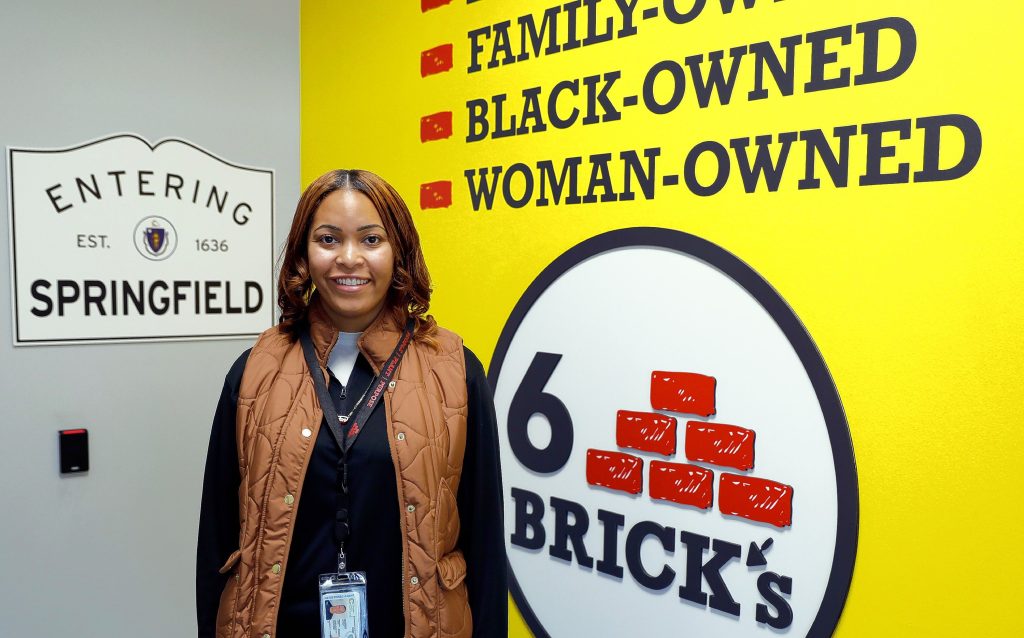 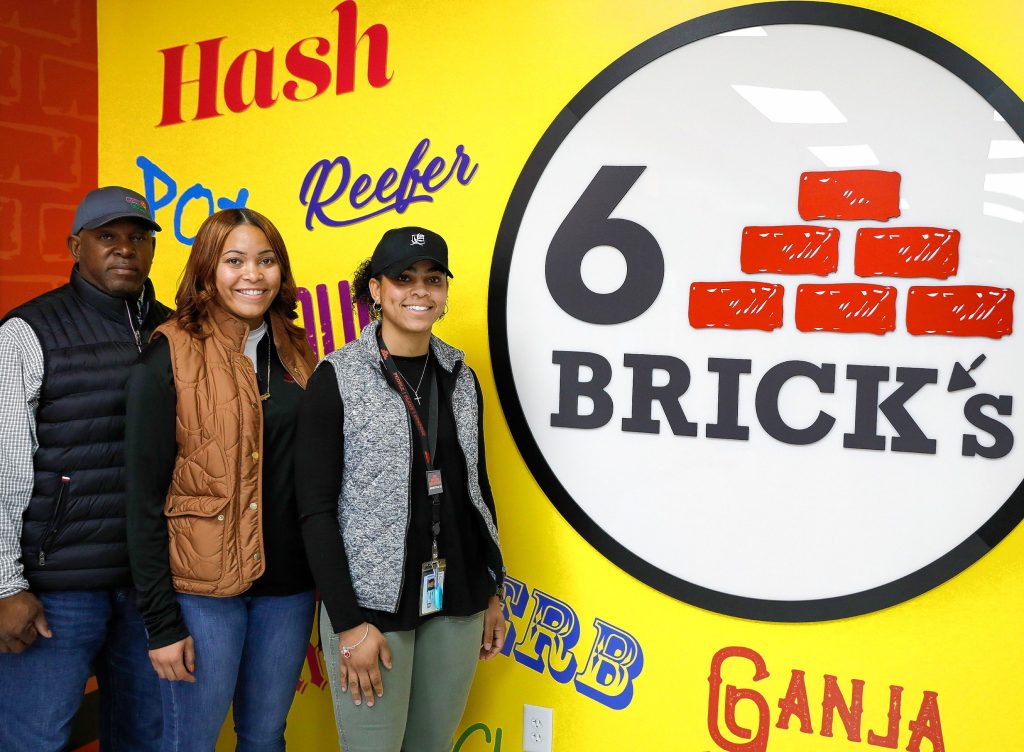 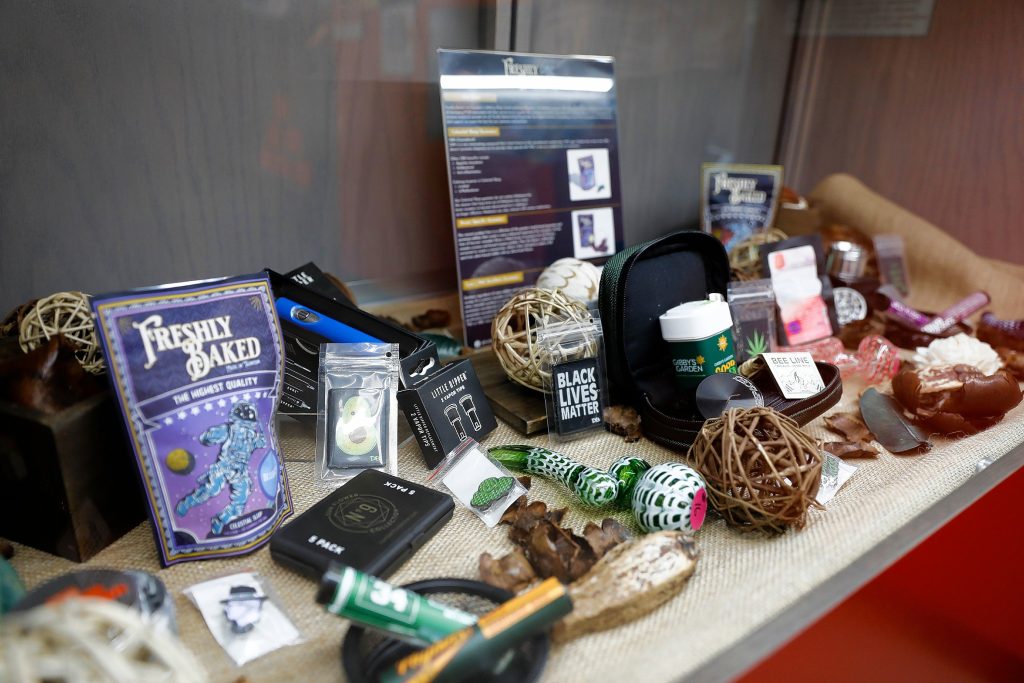 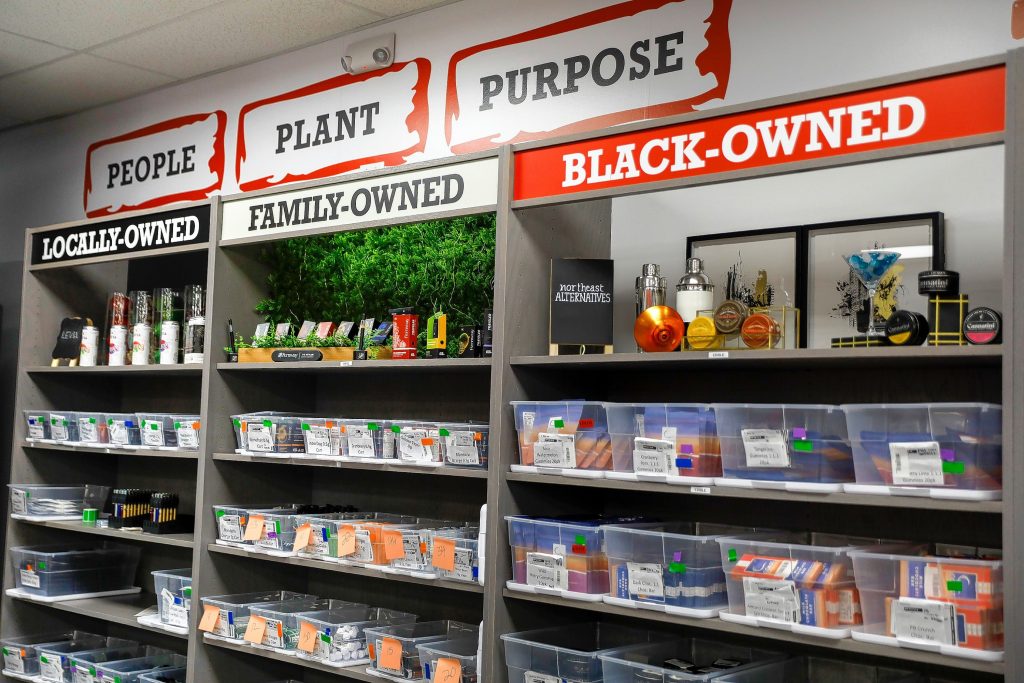 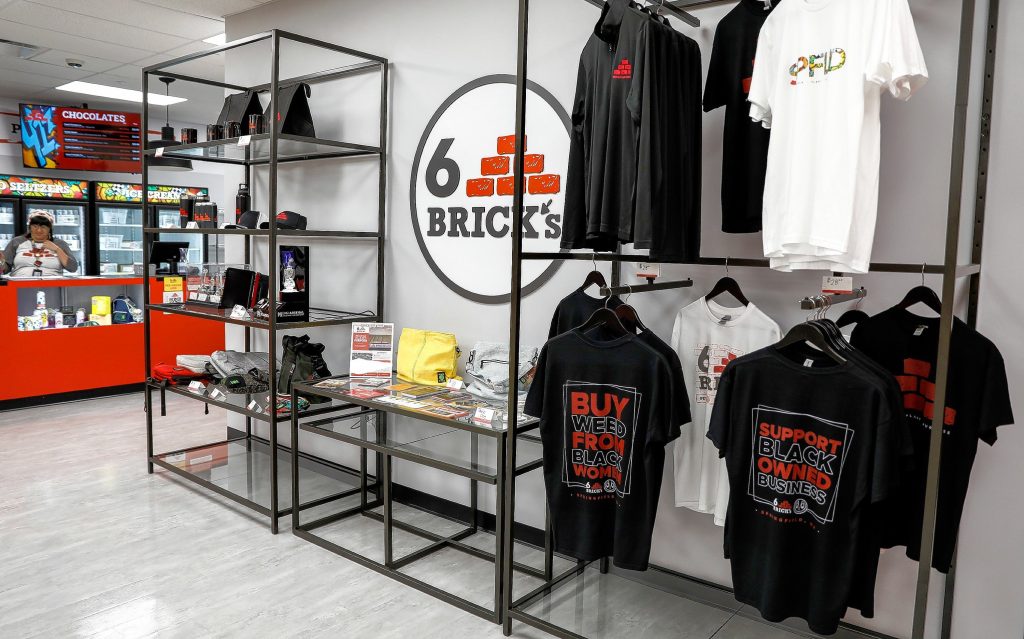 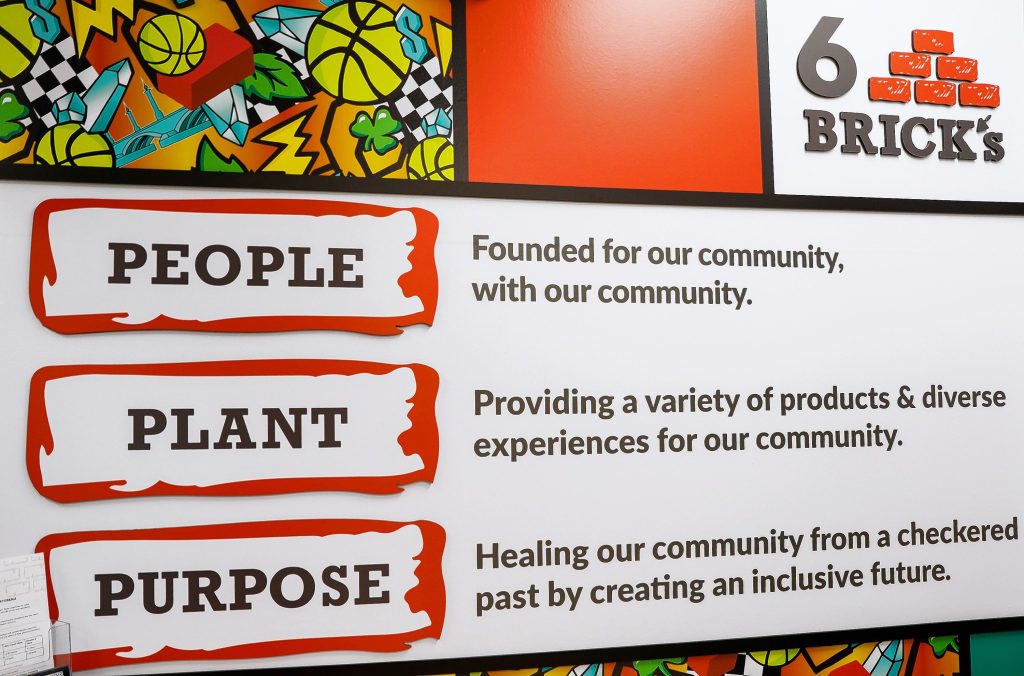 From giving Springfield residents the chance to start a career in the cannabis industry to giving back to the city, Payton Shubrick has a number of goals as the owner of 6 Brick’s, one of the city’s recent dispensaries to open.

The business is named for the members of her family — mother, father, herself and sister — who all work there. Her other sister is currently at Duke but interned over the summer and she has a younger brother, who for the time being is too young to work with cannabis. Its slogan is “People, Plant, and Purpose,” and along the walls of the conference room are historical photos and news articles about the city of Springfield. All this points to a dual purpose — to run a successful business and at the same time give new opportunities to the city that raised her.

“That’s because I believe firmly two things — one, cannabis can be a part of your wellness routine, but two — communities like Springfield deserve the respect of being treated as though they are the high-end clientele like you would see in other communities,” she said. “And so, community is extremely important not only in employing people from the community, but the ways in which we’re engaging in treating the community.”

After graduating from Holy Cross College as a political science major, Shubrick’s originally intended to attend law school. Before law school could commence, however, she interned with Springfield City Councilor Clodo Concepcion in 2016, the year marijuana was legalized in Massachusetts. It was at that time Shubrick saw the conversations begin at city council and other meetings. She also witnessed the many companies from outside Springfield eager to set up a cannabis business there.

“I really felt motivated to participate, because I was frustrated with that idea that people dismissed the reality that folks from the city of Springfield could do this for themselves in their community,” she said.

Starting the business was far from easy. Shubrick needed $100,000 in capital, which she provided herself. Thinking back to those early days, she remembers CEOs of other cannabis businesses suggesting that she seek the funds from friends and family, an idea she knew wouldn’t be possible. In fact, she waited until after securing a host community agreement — one of only four that the city was giving out to 27 applicants — before telling her parents about her next venture.

“I first told them I was going to be a lawyer and then conveniently pivoted to a legal drug dealer in my hometown was Springfield, Mass., which caused quite the stir across the family,” she said.

The next — and perhaps hardest step — was completing a three-and-a-half-year approval process through the state’s Cannabis Control Commission. Shubrick said the pandemic caused this delay, and that approval likely would have been completed within the advertised 14-16 months had COVID-19 not happened. This also led construction prices to skyrocket and supplies to be delayed. In addition, the murder of George Floyd by Minneapolis Police Officer Derek Chauvin led to investors asking how she, a Black woman, stood on certain issues.

“If you’re not well willing to sell yourself for pennies on the dollar, finding the right investors can be difficult, because if they’re bringing all the money, they also want all the control and if you want to be more than just the face of your company, it does require conversations,” she said

6 Brick’s opened at 1860 Main St. in early September and has a staff of 32 across four departments. This includes bud tenders, inventory specialists, security, and the leadership team. Those working with cannabis undergo a three-week training period.

To find this staff, the business hosted hiring events in the community, and Shubrick credits her head of human resources for encouraging them to be a presence in Springfield and not just assume a mentality that if the doors are open, people will enter. The importance of such a large staff is that no one burns out after working too long, and shifts are a mix of full- and part-timers.

The business works with 20 different cannabis vendors across Massachusetts — the laws prohibit working with growers outside the state. No product is grown on site. Every potential vendor is reviewed and visited before an agreement is reached. Shubrick said that Springfield is somewhat underserved in the cannabis industry, with only three locations for a city of 150,000. One goal of 6 Brick’s is to connect with the customers and make sure they are educated on the product.

“So, we’re hitting on a diversity of awesome old customer personas as we think about being able to help them incorporate cannabis into their wellness routine, but do so in a form factor that they’re comfortable with,” she said. “But that starts with a conversation.”

6 Brick’s has already begun investing in the community, sponsoring events such as the Stone Soul Festival and hopes to find other organizations that feel strongly about helping the city.

Diversity in the industry

6 Brick’s is one of only three Black woman-owned cannabis stores in Massachusetts, and among the only 2% of Black-owned stores across the country, said Shubrick. Knowing this is a little disappointing, she said, particularly since she knows more people whose lives have been negatively impacted due to arrests for cannabis possession than those who work in the industry.

“I had classmates who picked up charges relative to cannabis possession,” said Shubrick. “And when I think about what that did to their life in comparison to my own, it does provide a real sense of responsibility to provide a voice to the voiceless.”

Shubrick feels that not talking about cannabis’ checkered history is a disservice to those that paid the price when they went to jail or saw a loved one incarcerated. A person who is put in prison isn’t some isolated incident, she added, in that it impacts everyone around them. She wants to highlight this as the nation potentially heads toward a federal marijuana legalization. She said that President Joe Biden’s recent announcement that those incarcerated on federal marijuana charges would be pardoned was a “real step forward.”

“But the reality is we still have large conglomerates who are multistate operators who are benefiting in the millions and billions that are not doing enough in communities that were most impacted,” she said. “It’s great if you offer someone the job of a bud tender inventory specialist, but what are you doing to get people of color into the C suite?”

Shubrick said there are certain assumptions and stigmas being a Black woman running a business like this. People sometimes assume that she’s a front for someone else, something she called “an insult to my intelligence assuming that I would need essentially someone else to guide and direct in order for me to get to this point.”

Shubrick added that it’s important for her to be authentic, acknowledging the history of cannabis and creating a business that anyone can access.

“I haven’t done my job, both as a Black-owned business but also as a Black woman because my goal is to make it more accessible to people,” she said.

Shubrick said the process to get here has been difficult and the mental and emotional toll can be seen. But at the same time, she feels it’s important that if one goes into this industry, they need to be clear about the reason why. When the marketing for 6 Brick’s was unveiled, Shubrick said she was going for honesty, to help people see that this is a family-owned business in Springfield.

“So, 6 Brick’s was a way to honor that — I wanted people to be educated on cannabis, so people, plant, and purpose became the tagline,” she said. “But it was never clever marketing. It was always being authentic to why I got started in the beginning.”