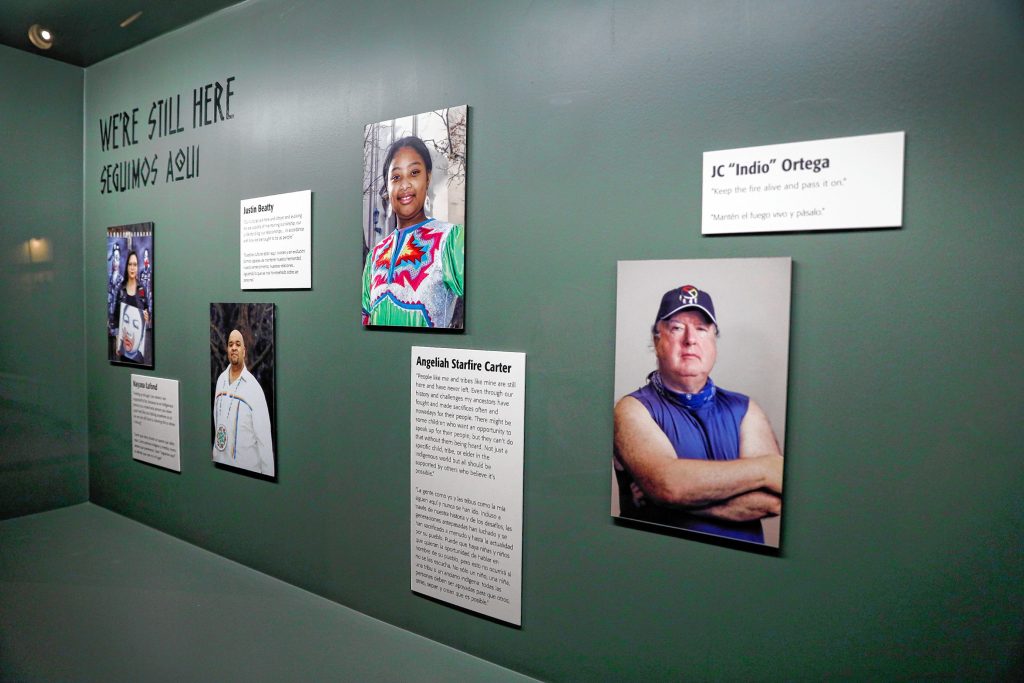 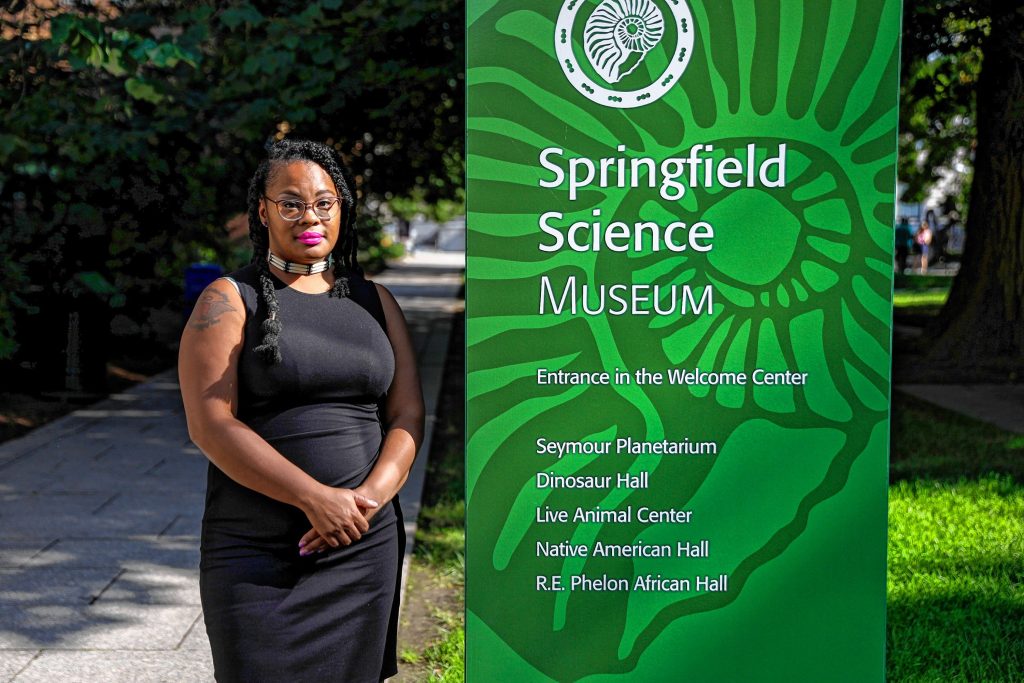 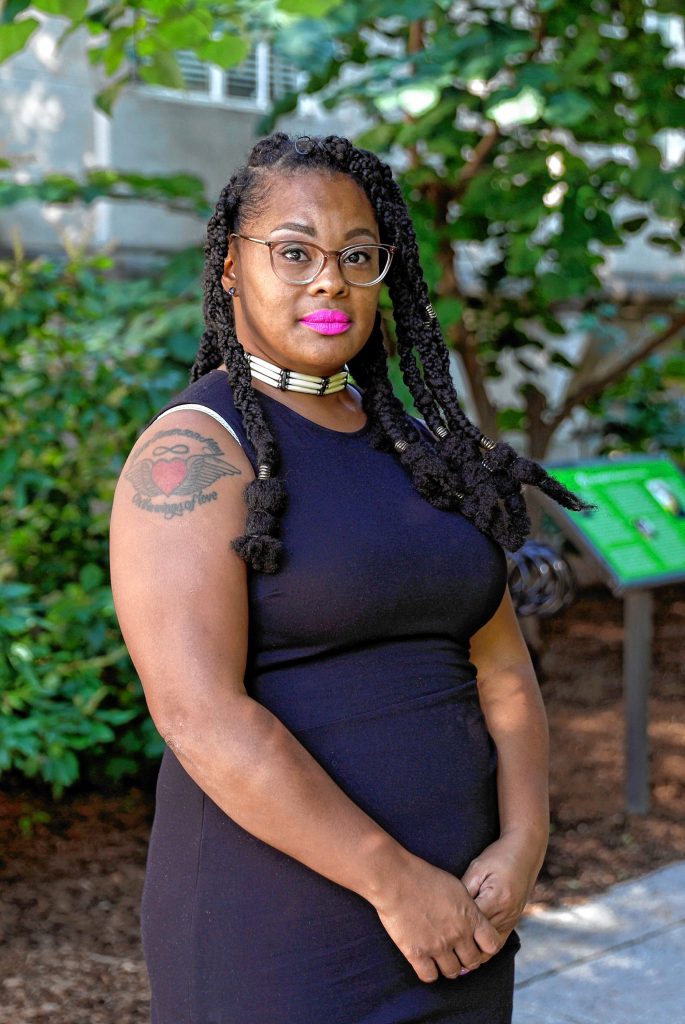 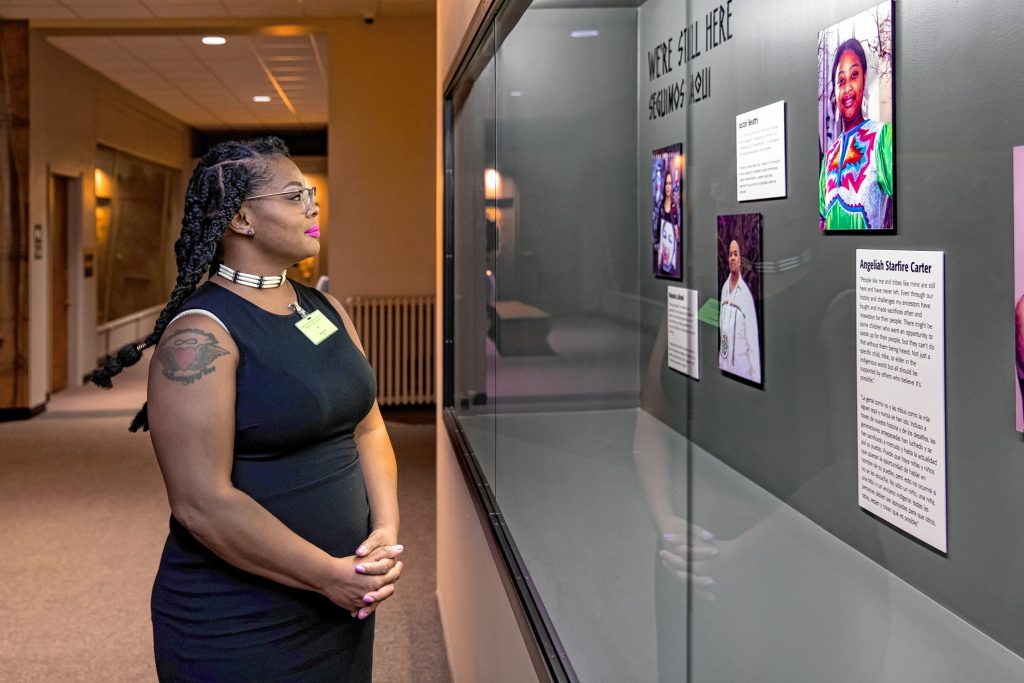 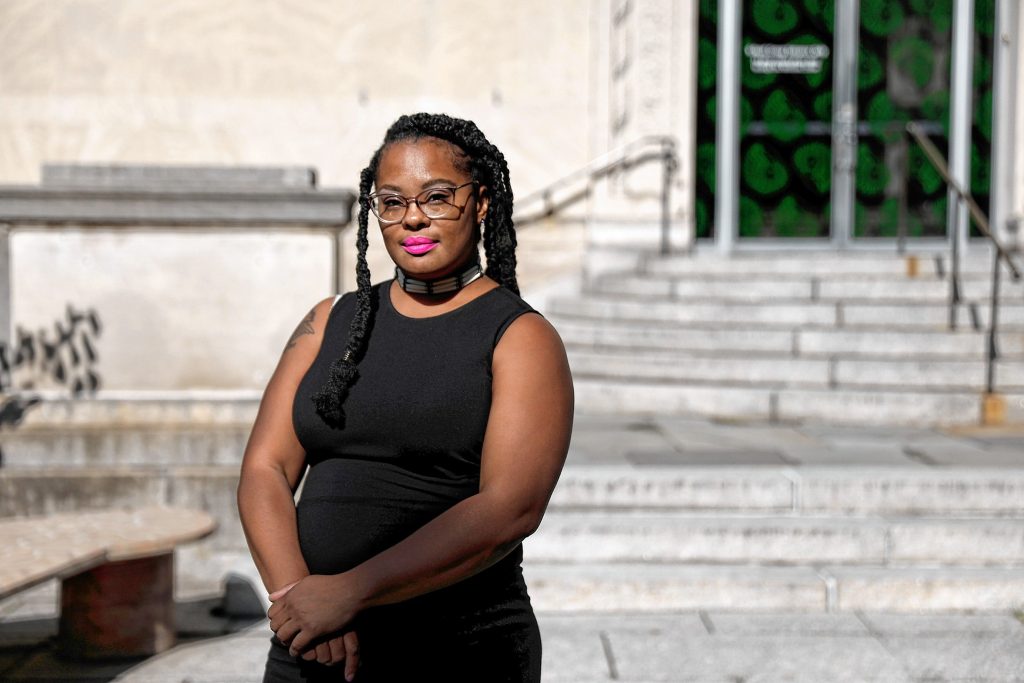 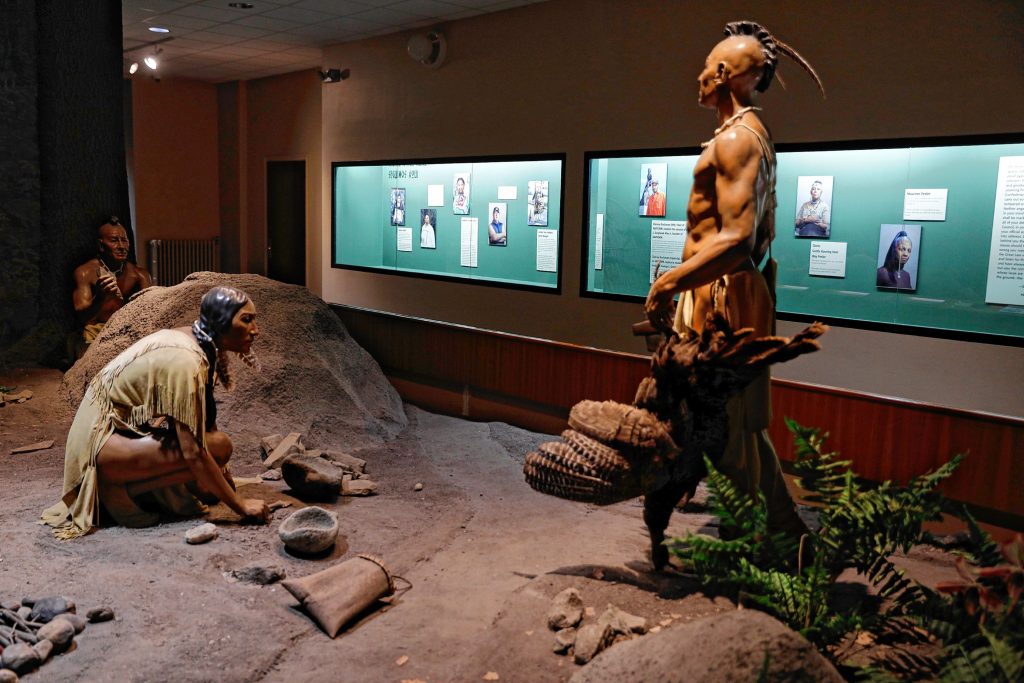 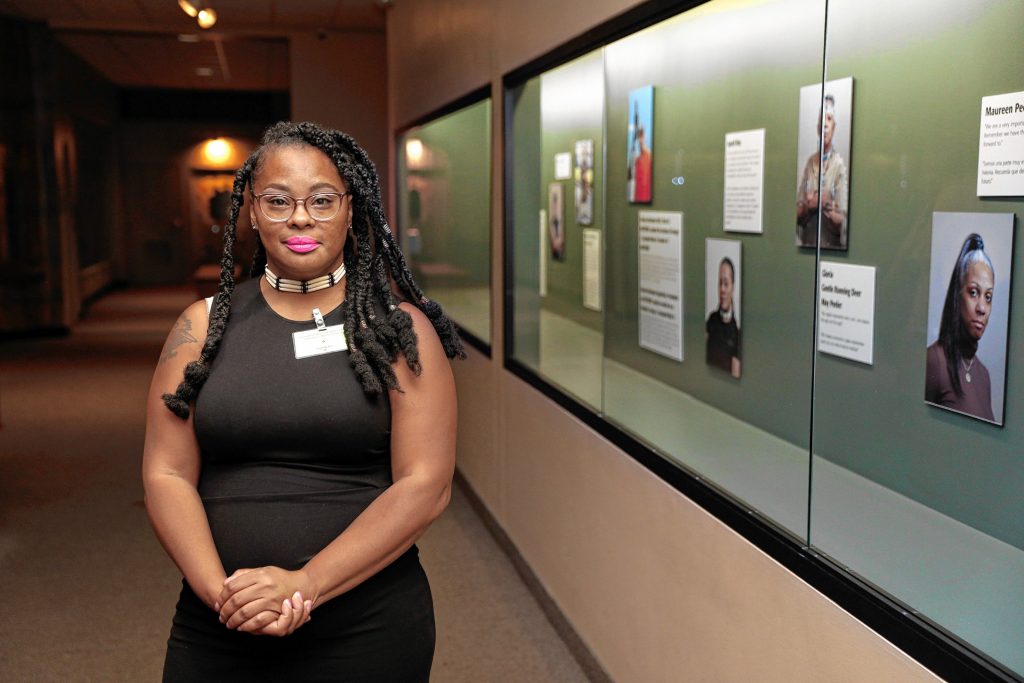 Growing up in Springfield, Aprell May knew a few bits and pieces about her Native American ancestry. But it was not something that family members talked about much.

In fact, May says that for years she thought of herself as a “Lost Bird” or a “Missing Feather” because she knew little about the traditions and culture of her Indigenous background, which she traces to the Mohawk, one of the central tribes of the Iroquois Confederacy of the 17th and 18th centuries in upstate New York.

But over the last several years, May, who’s 39, has taken a deeper dive into her family’s past and Native history in general — and now, as a guest curator, she’s put together an exhibit at the Springfield Museums to tell some of that story and that of other Native peoples in the region.

“We’re Still Here,” in the Springfield Science Museum, is designed to remind visitors that, indeed, Native peoples today are part of Western Massachusetts and modern America in general. With photographs and accompanying text (in English and Spanish) contributed by the participants, the exhibit profiles 11 people, including May, and examines themes of resilience, identity, and cultural history.

May, a reporter with the Springfield Republican — her byline appears as Aprell May Munford — recalls sitting in a history class one day as a student at Bay Path University when her professor asked students what they thought had happened to American Indians. Nearly every student thought they had become extinct, May said during a recent interview at the Springfield exhibit.

“I remember thinking, ‘Is everyone just living under a rock?’ ” May recalls. “But at that point in my life, I didn’t know that much about my own family’s story, either.”

There was a certain irony about that. “We’re Still Here” is located in Native American Hall in the Springfield Science Museum, a space partly taken up by a large diorama of Eastern woodland natives in which a button activates a voice that explains some the scene. The voice is actually that of May’s great-aunt, Gloria “Gentle Running Deer” Peeler, whose photo is part of the exhibit.

“I came [to Native Hall] many times when I was growing up, and I heard her voice,” May said. She also brought her own daughter, Olivia, to the exhibit when she was young, as well as some of her nieces. Yet May didn’t know that much about her great-aunt’s background.

But over the last several years, her great-aunt told her more of that story, as well as that of May’s grandfather, Gloria’s brother. Their family in Massachusetts had been broken up decades ago by the state, May says, when her great-grandmother Harriet Minor May had been jailed in Framingham because officials believed she could not care for her 11 children.

“There was a lot of trauma around that, a lot of things that got buried, so nobody in my family talked about it for many years,” May said. “But now we’re reclaiming our stories … the exhibit is really about bridging the past and the present.”

Building links to others

May has become active in the Native American Inter-Tribal Council of Western Massachusetts, a group whose members are drawn from several tribes and which holds events such as pow wows and various educational events. Through the council, she’s made connections to several of the people now profiled in “We’re Still Here.”

There’s artist Justin Beatty of Hadley, for instance, who like May has Native and African American heritage and organizes and takes part in regional powwows as a singer and drummer. He also organizes art exhibitions, and many of his digital paintings feature proudly dressed Native Americans in urban settings.

In the exhibit, which runs through June, Beatty writes “Our cultures are here and vibrant and evolving. We are capable of maintaining our kinship, our understanding, our relationships … in accordance with how we are taught to be as people.”

Also profiled is Nayana Lafond, an Athol painter who grew up in the Valley and graduated from Amherst Regional High School. Lafond, whose ancestry is part Anishinaabe, Abenaki and Mi’kmaq, has won much attention in the last few years for an extensive series of portraits of Indigenous women, primarily from the western U.S and Canada, who have been victimized or otherwise affected by domestic violence.

Glenroy Buchanan, the chair of the Inter-Tribal Council, explains in the exhibit that the founder of the organization, the late George L. Greyhawk May Jr., wanted to “make sure children of the [Native] diaspora would be proud” of their history and not feel compelled to do what previous generations had done, such as taking on “common names to avoid discrimination when getting a job.”

As just one example of the prejudice Native peoples have faced, the U.S. Interior Department earlier this year issued a report documenting how the federal government, between 1819 and 1969, operated or supported over 400 boarding schools in which Native children were forcibly “Americanized”: They were forbidden to speak their own languages and punished if they did, they had their hair cut short, and they were often separated from their families for years at a time.

“That’s what this exhibit is about as much as anything,” said May, who previously worked at Springfield Museums as an intern. “I want us to be able to pass on our history, our culture and our experience in overcoming trauma to the next generation.”

In addition, museum officials say they’re committed to re-envisioning Native American Hall and working with Indigenous groups such as the Inter-Tribal Council of Western Massachusetts to present more exhibits that will “respectfully (recognize) the history, traditions, and ongoing culture of Native communities (that) were, and still are, located in the region.”

May says she’s working with museum staff and the exhibit participants to add some video interviews and other components to the exhibition that visitors will be able to access via their cell phones. Additional events, such as storytelling and songs in the exhibit space, are also planned.

As well, the Inter-Tribal Council hopes to find a physical space to house what May calls a Native American Peoples Resource and Cultural Support Center that could devote greater efforts to support Indigenous people in western Massachusetts and to educate the public about Native stories and experience.

“We’re slowly building up our presence, and there’s a lot more we’d like to do,” she said.

For additional information on the exhibit, visit springfieldmuseums.org/exhibitions/were-still-here.