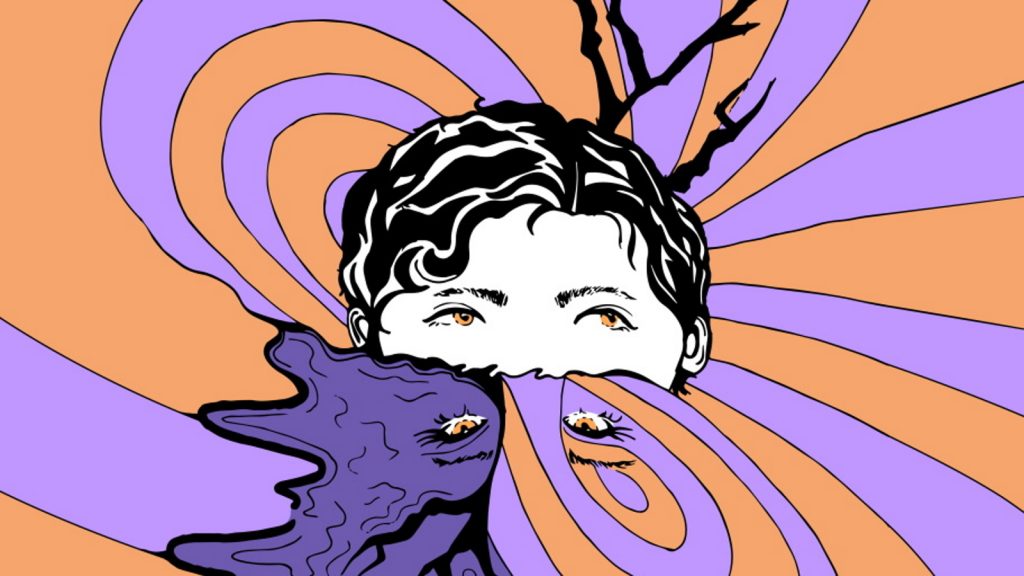 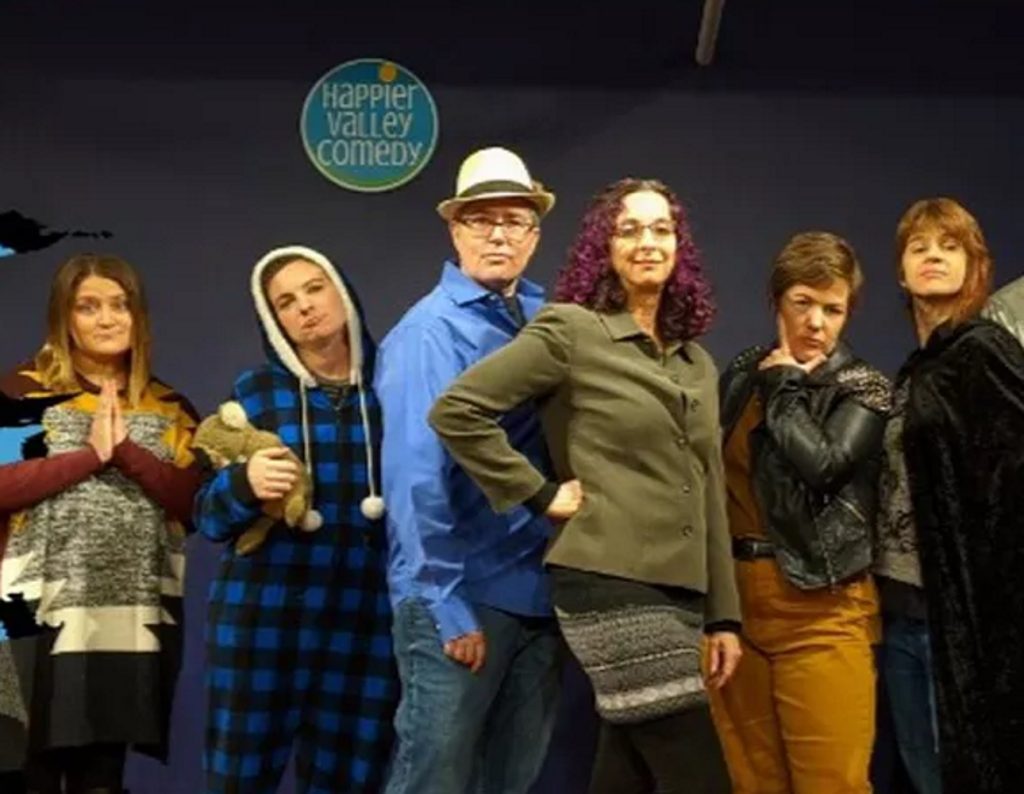 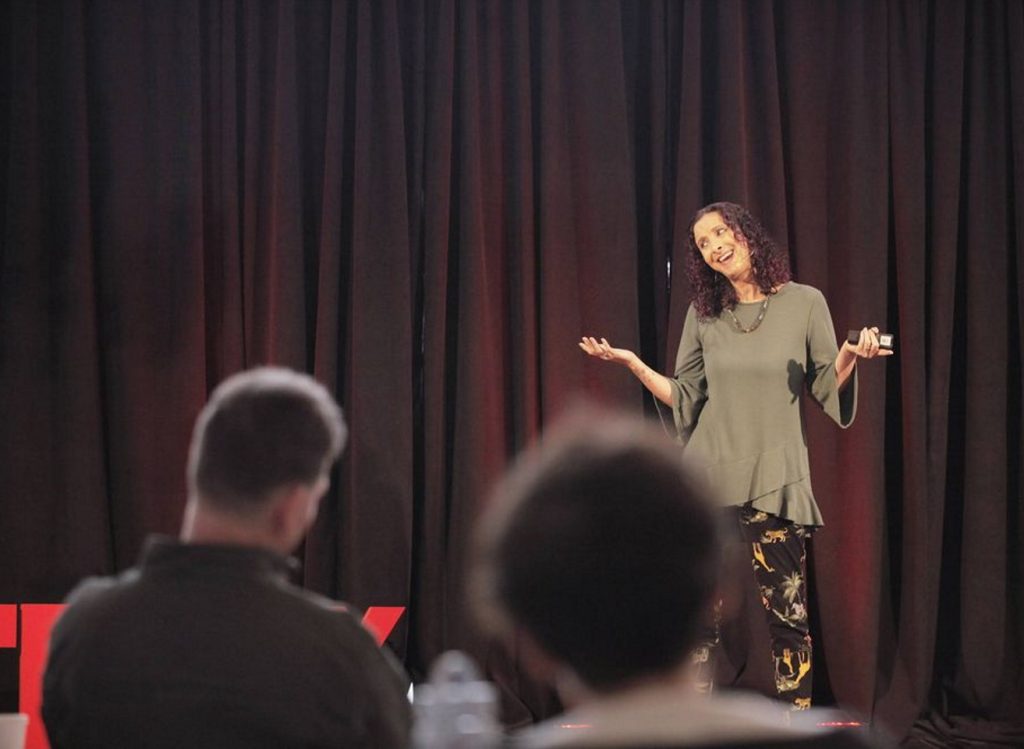 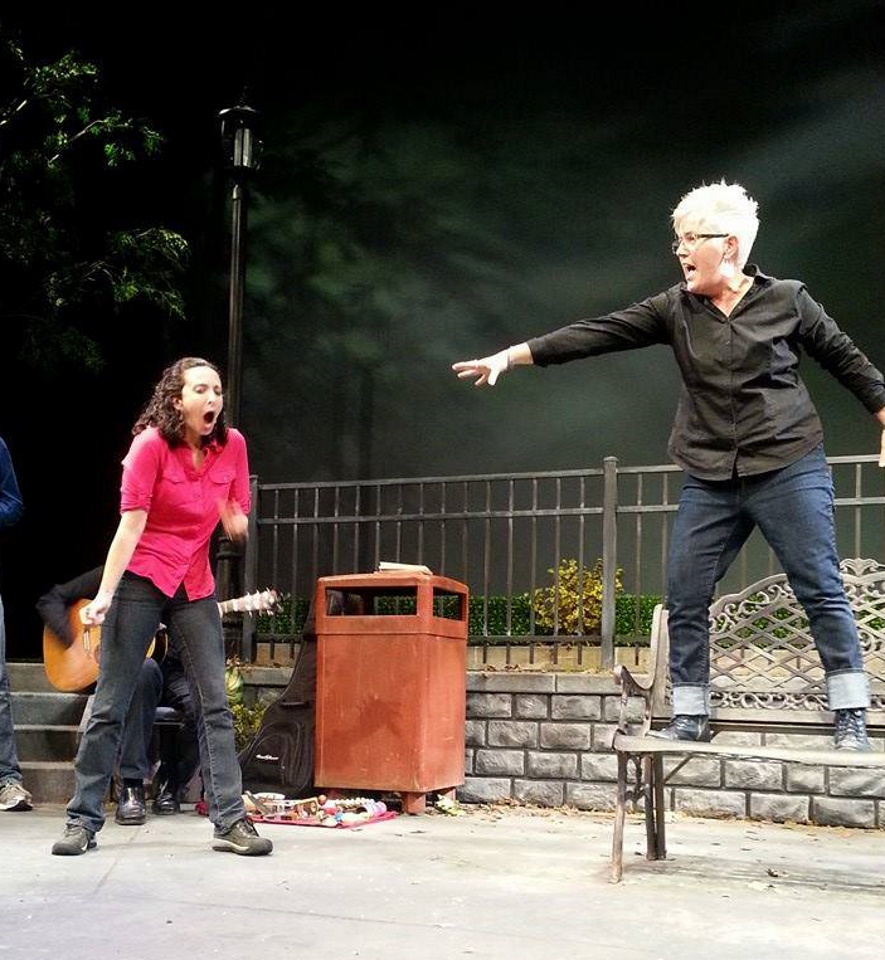 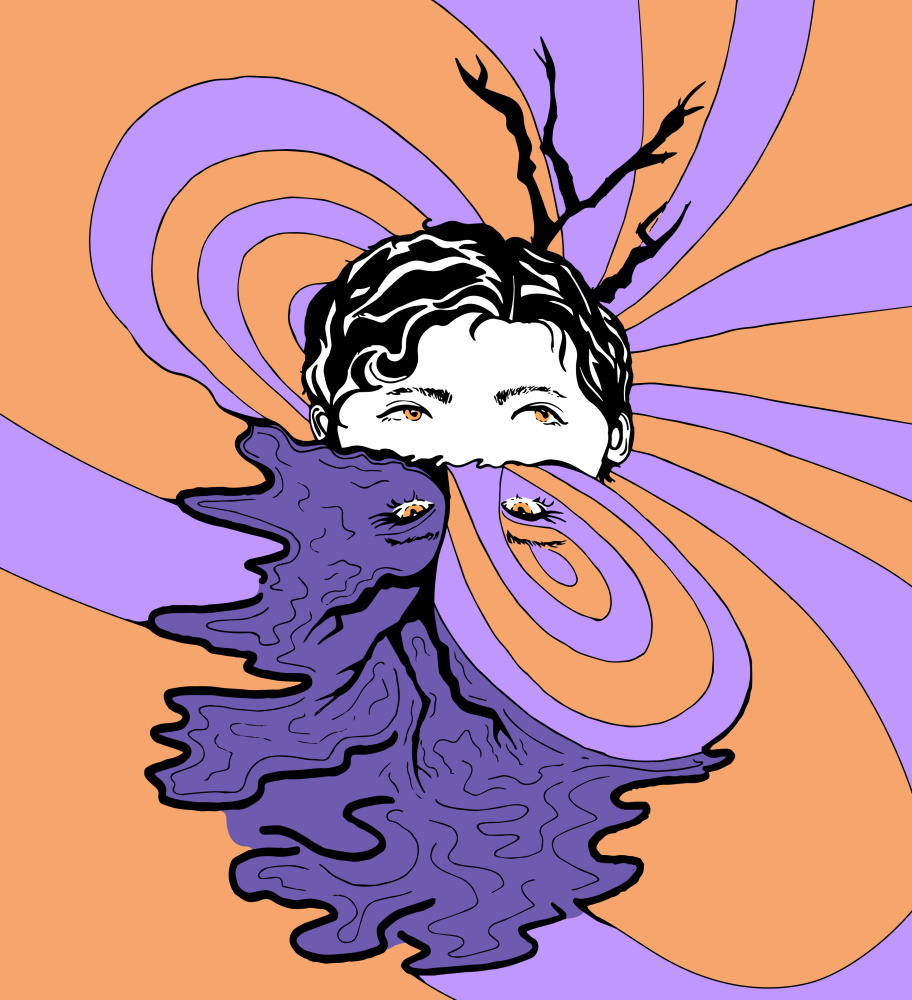 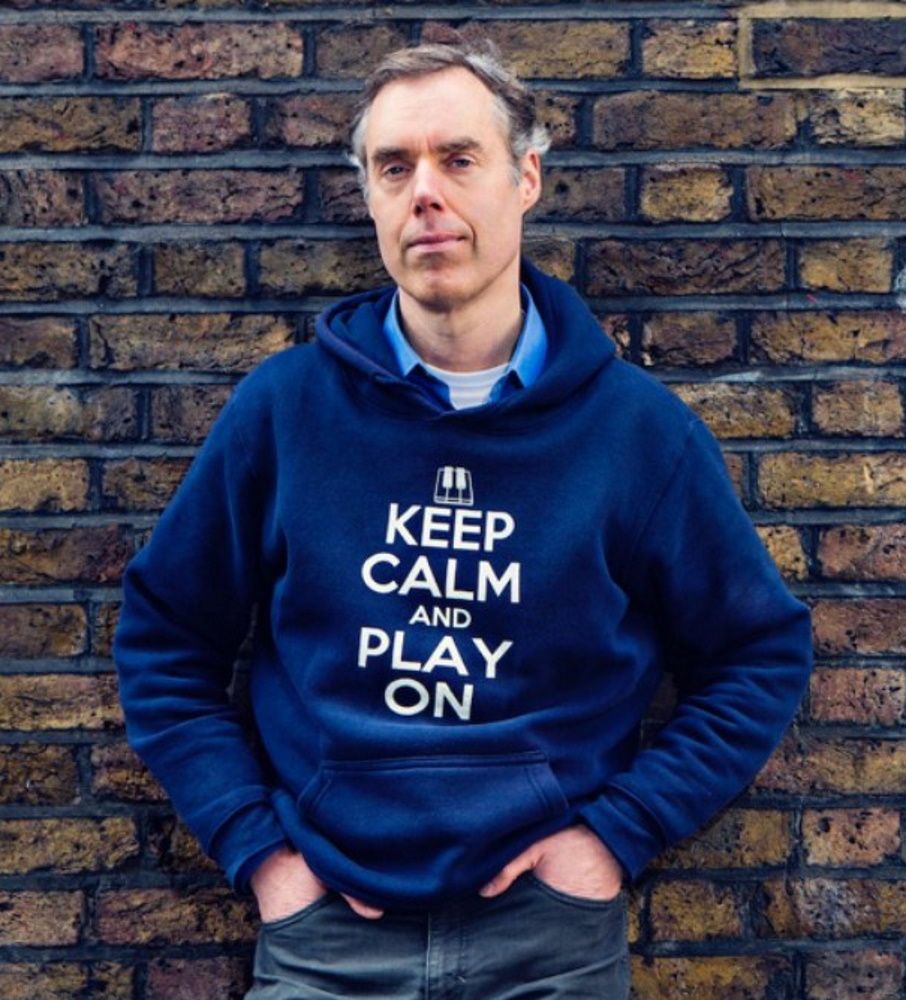 The latter shows all spring from the same fertile source, Pam Victor’s Happier Valley Comedy, whose Hadley venue hosts a weekend repertory of improvised havoc. Every Saturday of the month features a different show, in a rotation of formats and themes. (There’s currently a 3-for-2 ticket deal: buy two, take a friend for free.) 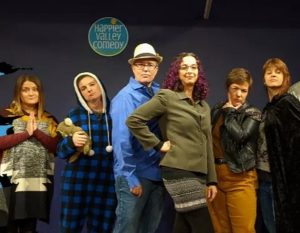 All the performances take off from spontaneous audience suggestions and build on the foundational rule of improvisation: “Yes, and” – the principle that improvisation is a cooperative transaction that yields “the joy of the unexpected.”

This Saturday a team of HVC veterans up the improv ante from the classic quick-skit format, diving into long-form improv that teases out a complete, complex story. Next weekend “Not in Charge” spins comic narratives out of true stories. Last weekend we just missed the monthly first-Saturday show, “The Understudies,” who improvise an original musical from scratch (it’s back in December). 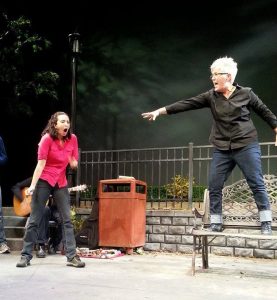 Members of HVC’s comedy teams also show up in West Springfield as The Majesters on some dark nights at the Majestic Theater. “Theater on the Spot” takes over the set of the current production and creates a different play suggested by the surroundings. It’s on next Monday, the 14th, on the set of Love, Milly & Murray, “a new comedy about old love” which tells “a perfectly imperfect love story.”

Orlando, at UMass this weekend and next, is Sarah Ruhl’s 1998 adaptation of Virginia Woolf’s 1928 novel about a man who becomes a woman and never grows old, traveling through five centuries of history, from the court of Elizabeth I to strife-torn Constantinople to Victorian drawing rooms and into the 1920s. In Iris Sowlat’s production, the he/she binary dissolves into a gender-fluid journey of discovery. 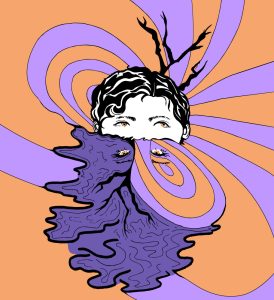 As dramaturg Percival Hornak puts it in the show’s publicity, “This is a story about self-actualization. It’s a story about feeling like you are finally able to live in the world because you understand who you are and where you belong in it.”

Sowlat sees their production as “the ultimate coming-of-age story. It’s an optimistic story that’s about people who happen to be queer, being joyful and being exceptional.” It’s also a story aswirl with period costumes and epic locations, created here by designers Emily Peck and Drishti Chauhan.

“What does it take for a man to become a feminist—and why does it matter?” This question is at the heart of Peter Pruyn’s solo performance Up: One Man’s Journey to Feminism.

Pruyn is a Northampton-based trauma therapist working with female survivors. As he told me, “I would find it difficult to do this work and not identify as a feminist ally.” In seven autobiographical vignettes, Up traces his own sometimes traumatic experiences that led him to that stance. They are punctuated by improvised keyboard interludes “to underscore the emotional experience of the stories.” 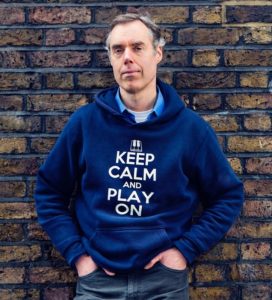 Being bullied in his all-boys primary school gave him one lesson; being the only man in a Women’s Studies class in college brought another. His professional training took him to the trauma unit of a psychiatric hospital and to a methadone clinic. (There’s also a side-trip to his time as a bush pilot in Alaska, with visual aids in the form of stuffed-animal musk oxen.) He concludes with “a personal reflection on male privilege as a fundamental barrier to social change.”

Pruyn is not a professional actor, and told me he thinks of the piece more as “performed narrative” than a formal play. He considers himself “a private person,” and this show “the most emotionally vulnerable thing I’ve done in my life.”

Each one-hour performance, presented on the next three Sundays, is followed by a talk-back period for audience reflections. “The performance,” he said to an interviewer, “is really just a prompt to start a conversation. He hopes that “by creating a safe space to have that conversation, it will serve as a bridge for people carrying the conversation forward in their own lives.”

There are humorous moments, but the piece is no comedy, despite its venue: Happier Valley Comedy. A portion of the proceeds will be donated to I Have The Right To, a resource for students and survivors of sexual assault.