Stagestruck: Wit and Wile on the Riviera 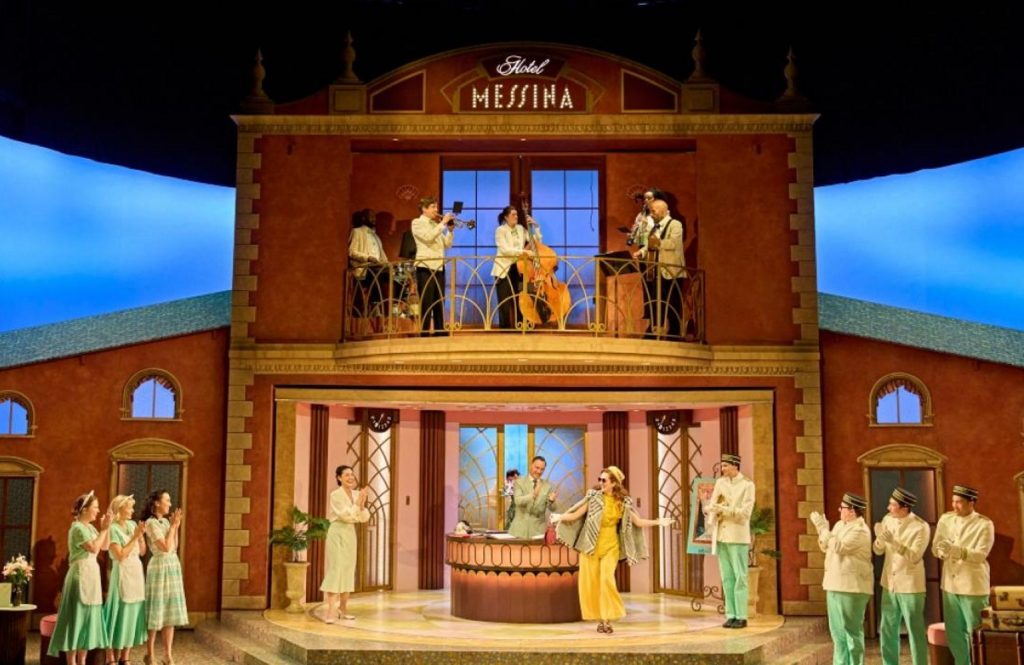 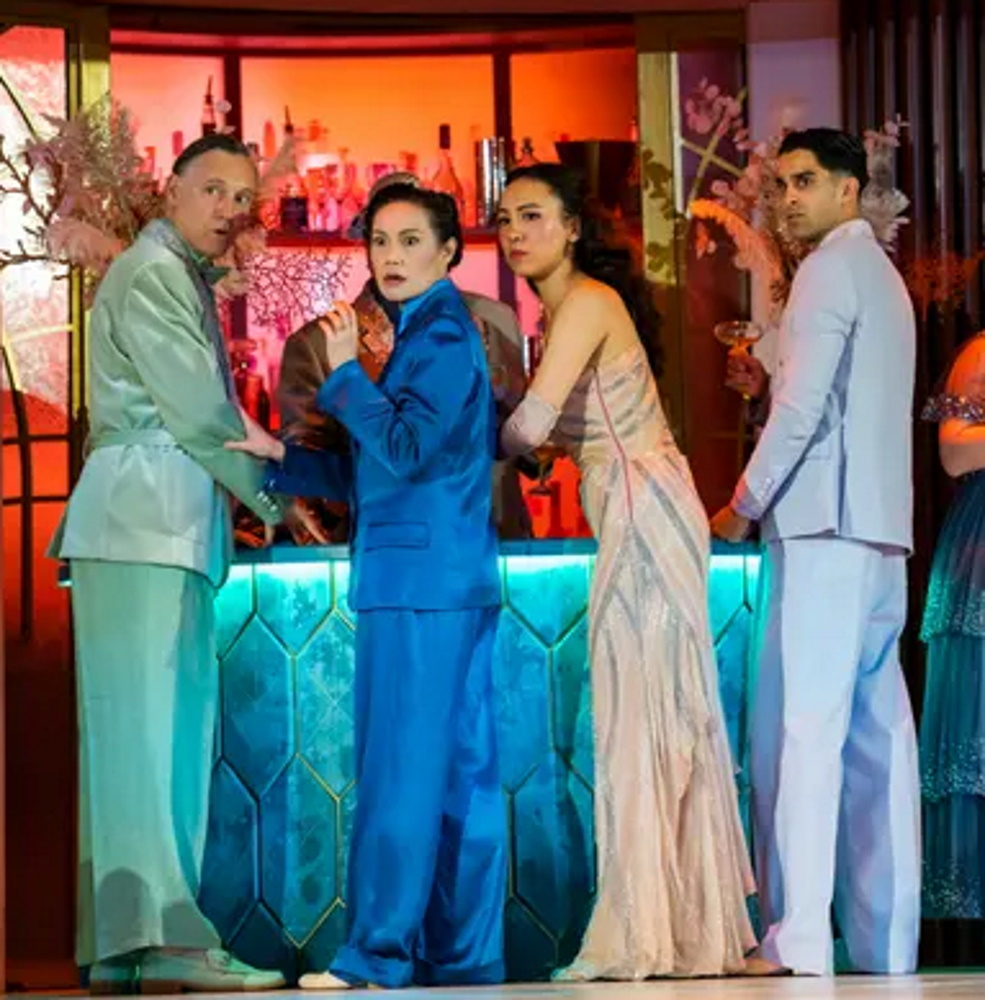 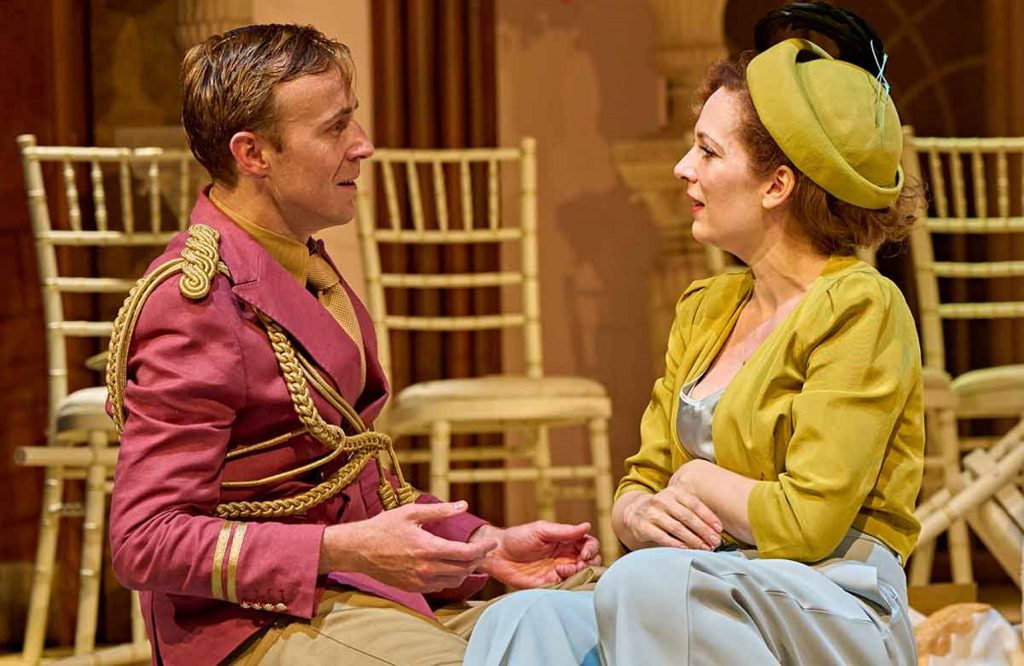 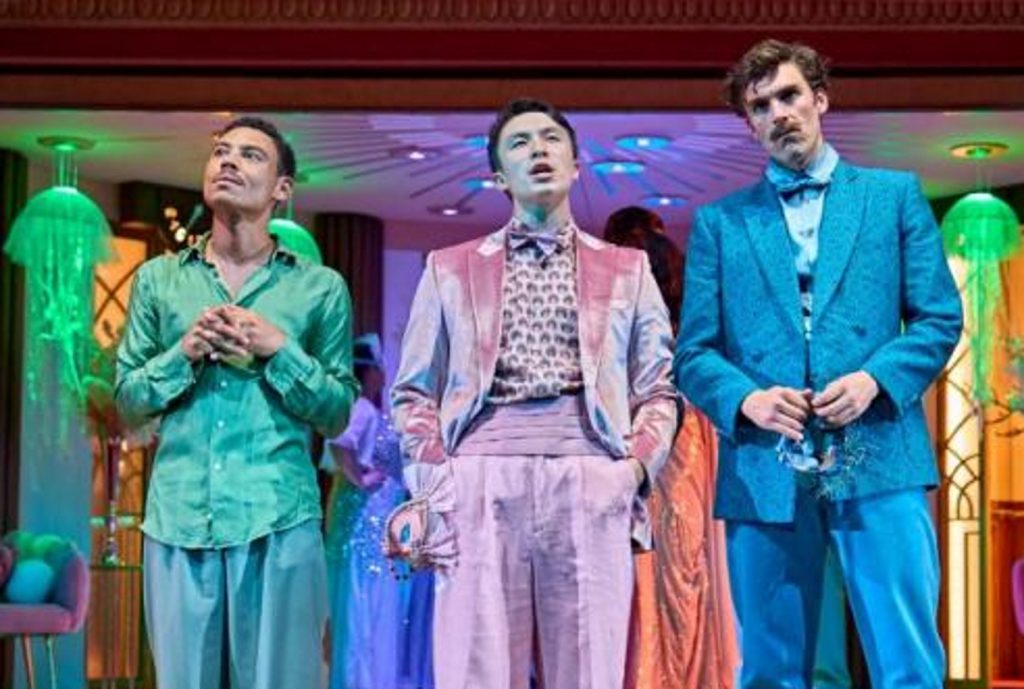 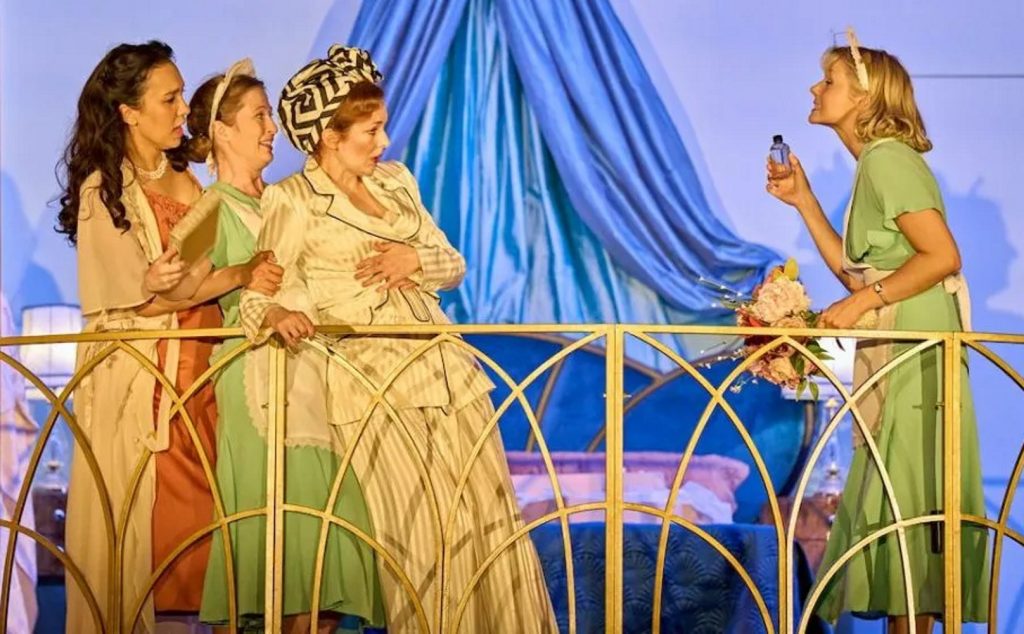 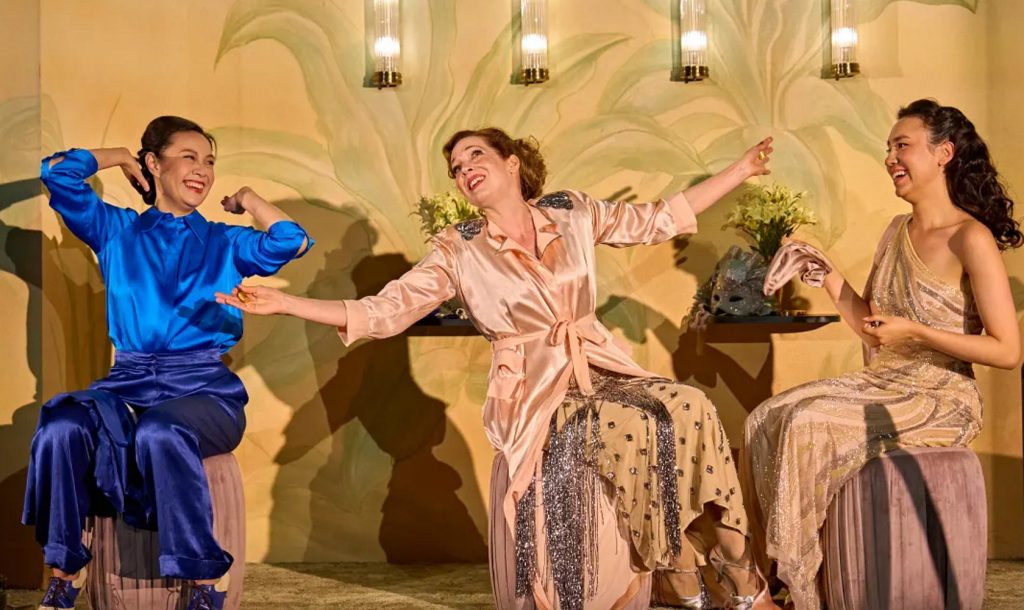 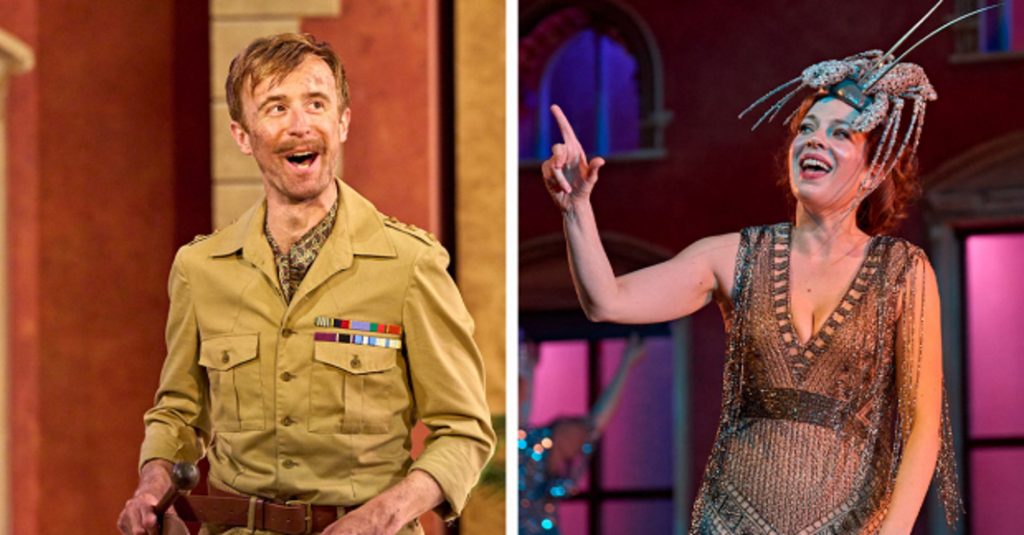 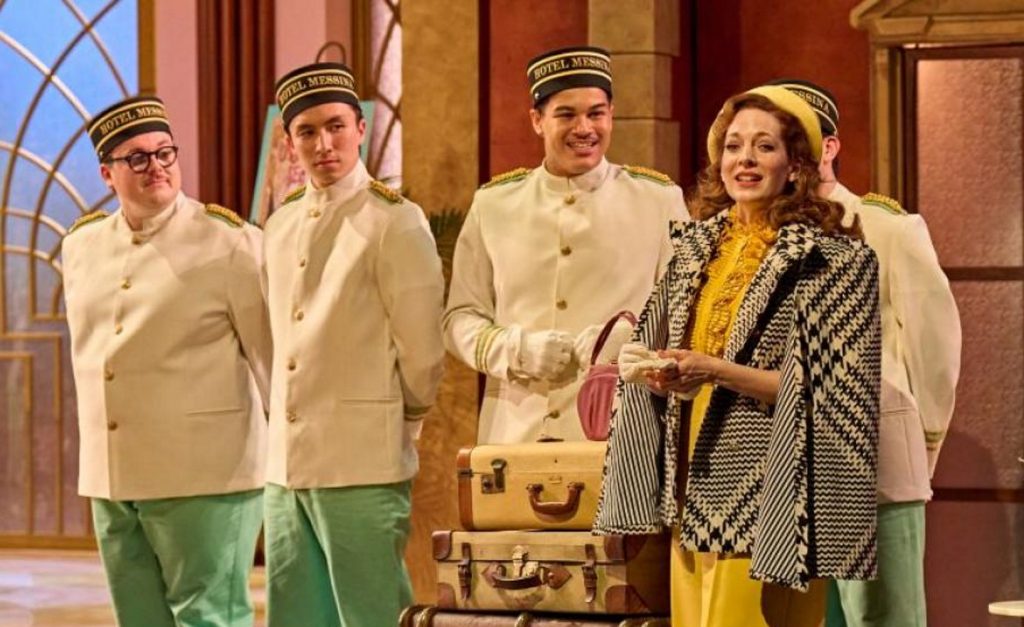 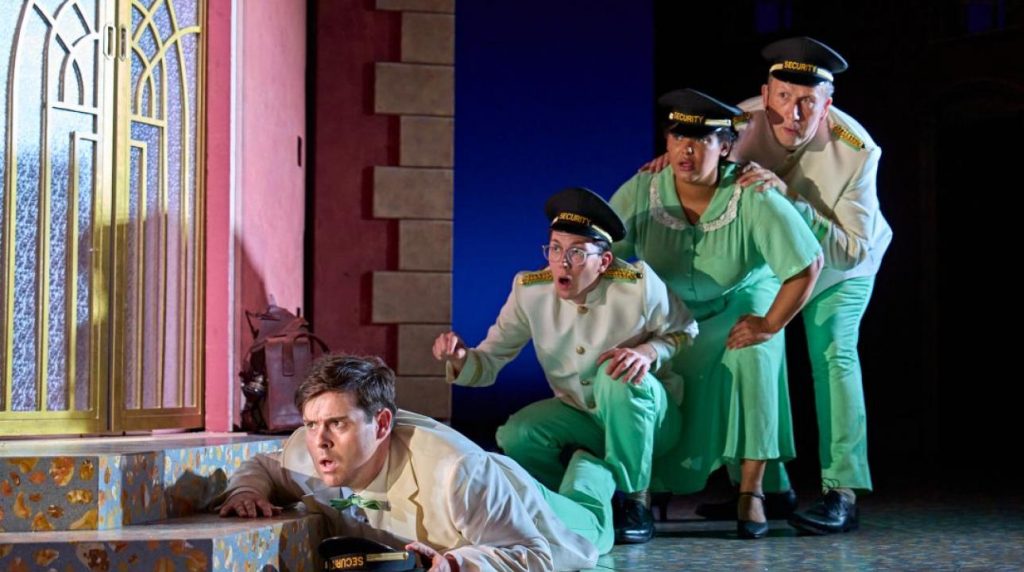 As winter approaches, National Theatre Live serves up a summertime tonic (as in, gin and).  The live-capture of the National’s stylish Much Ado About Nothing screens twice this month in the big theater at Amherst Cinema, the Valley’s indispensable film house.

Director Simon Godwin’s lavish modern-dress production of Shakespeare’s comedy of wit and wile is set in the Hotel Messina on the Italian Riviera, in an “imagined past” that looks and feels like 1930s Hollywood. Think Grant and Hepburn, Fred and Ginger. I guess the National calls this past “imagined” because if we took the ’30s setting too literally, we’d have to assume the company of soldiers whose arrival at this Italian resort triggers the twin plotlines are troops in Mussolini’s fascist army. But no dark historical analogs here. While one of the plot strands is a near-farcical rom-com, the other is a lovers’ near-tragedy that shadows much of the action. 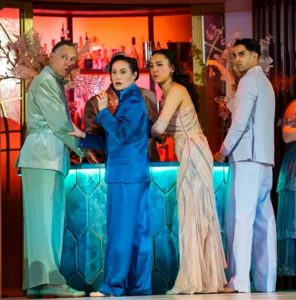 In that thread, the happy nuptials of young Hero and Claudio (Ioanna Kimbook and Eben Figueiredo) are upended by a false report of Hero’s infidelity – a plot engineered by Claudio’s commanding officer, Don John (David Judge), a shameless “plain-dealing villain.” Extra weight is given to it by an interpolated soliloquy for Hero, speaking Shakespeare’s sonnet 29: “When in disgrace of fortune and men’s eyes, I all alone beweep my outcast state.” (It’s not the production’s only borrowing – three songs are imported from other Shakespearean comedies.) 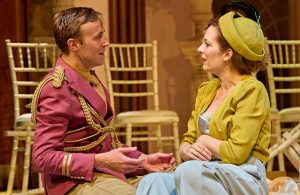 At the center of the whirl are the mismatched lovers Beatrice and Benedick, she a waspish maverick, he the most confirmed of bachelors. At the outset of Godwin’s staging, it seems like we’re in for heartache here as well. The feuding lovers’ initial joust plays not like the “merry war” and “skirmish of wit” we’re promised, but a genuinely bitter feud.

It takes a while for the laughs to start rolling, thanks partly to Katherine Parkinson’s opting for broad strokes over lightness of touch. John Heffernan’s Benedick, though, is perfectly poised between boyish charm and hapless slapstick – Astaire meets Chaplin. Parkinson and Heffernan are both white – an anomaly in a lively, racially diverse cast spouting a diversity of British regional accents.

The play’s class hierarchies are echoed in the hotel’s personnel. Hero is the daughter of the Messina’s owner, Leonato (Rufus Wright), her harebrained maidservant (a frisky Phoebe Horn) is a chambermaid, 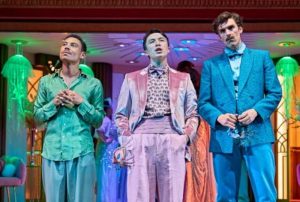 Don John’s henchman Borachio (Brandon Grace) is a sneaky bellhop and the scheming Conrade (Ewan Miller) is his orderly. And the play’s malaprop-prone Constable Dogberry, whose inept officers uncover the plot against Hero, becomes the hotel’s security officer (a burly, bumptious David Fynn).