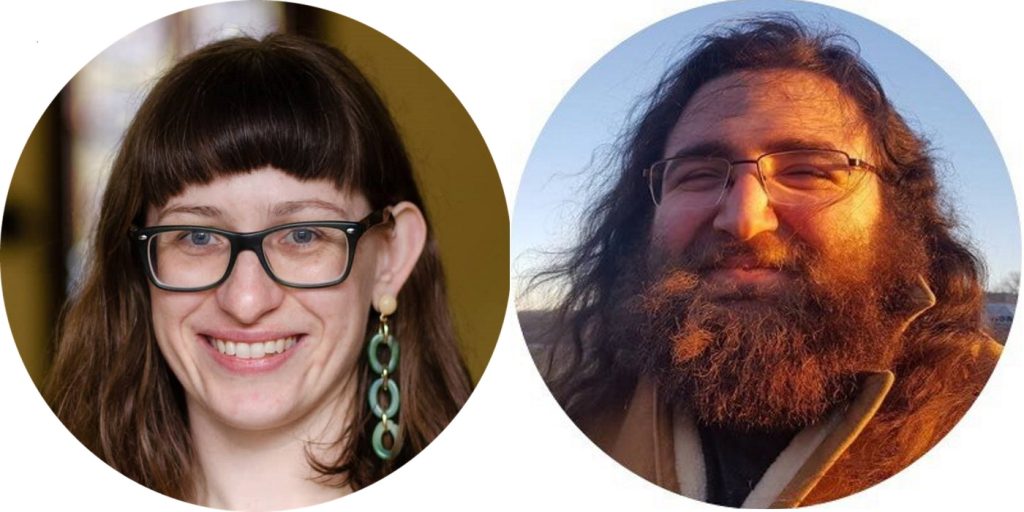 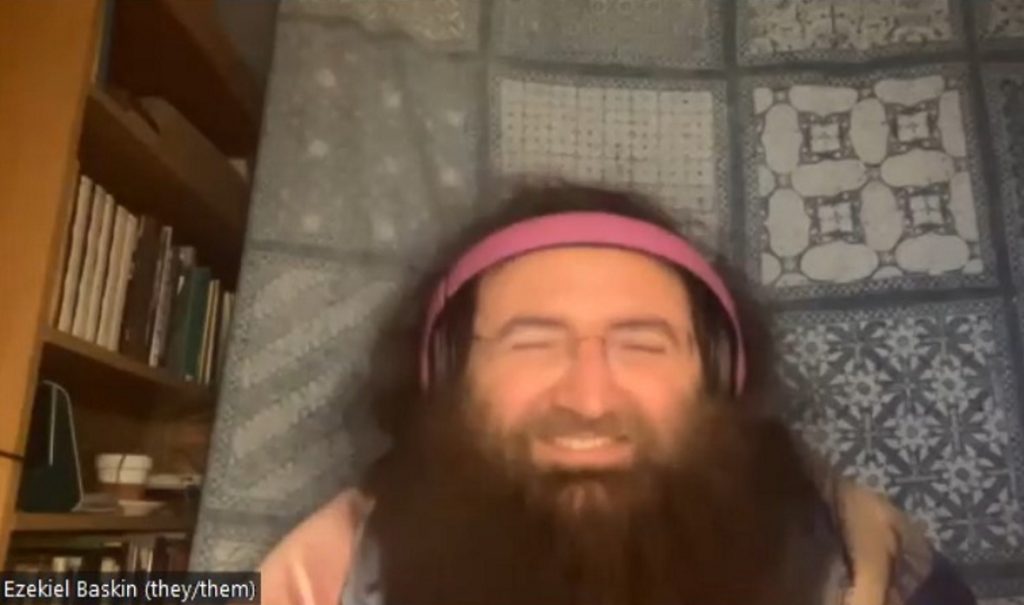 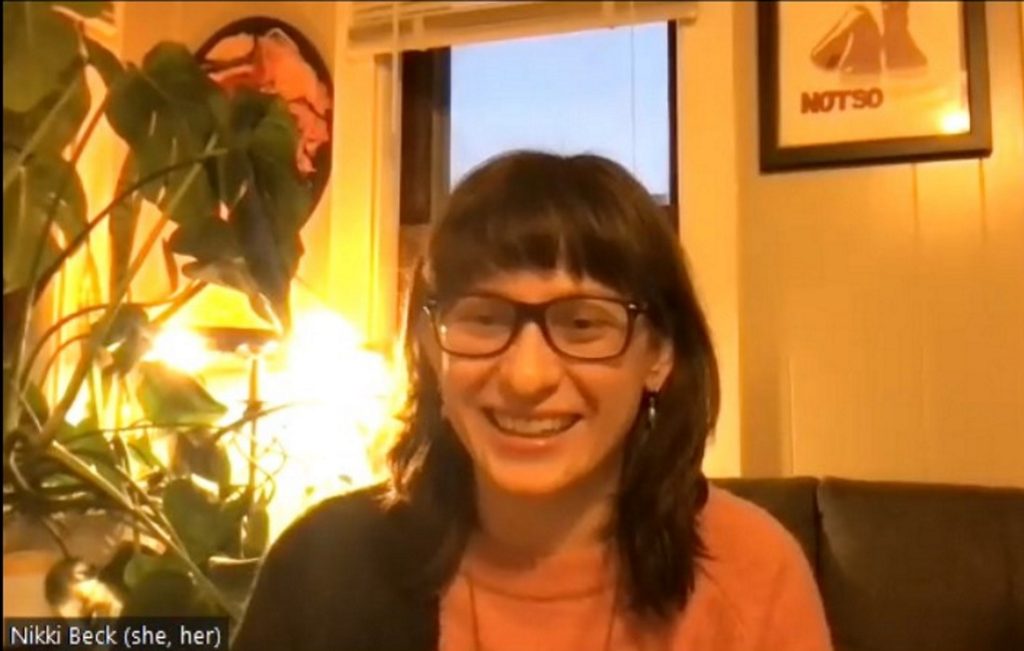 One night last month I was at the Academy of Music for a show, and there, behind the concession stand, was Nikki Beck.

“Are there three of you?” I asked, amazed.

She laughed and said, “Probably.”

Nikki is one of the busiest theater people around. You’ll never see her onstage or on the title page of the program, but you’ll very often find her backstage or elsewhere behind the scenes at any number of local theater events.

Ezekiel Baskin is another semi-invisible, seemingly-everywhere presence around the Valley. The other day, the two of them carved a precious half-hour out of their jam-packed schedules to chat with me on Zoom.

The first thing I wanted to know was what their multitasking portfolios look like.

Nikki: My main gig is Production Manager at the Smith College Theater Department. That’s full time, 44 weeks out of the year. My most long-term side gig is at the Academy of Music. I stage manage their annual stage play and do front of house all their other shows. I freelance stage-manage other shows at the Academy, including Pioneer Valley Ballet.

Also the Play Incubation Collective, which is a development process, a different kind of gig, I really enjoy that. Also Northampton Playwrights Lab and Five-College Opera. One of my favorite things is the ones that are once a year, like the 24-Hour Theater Festival and the ballet – we come together and do a thing for a day.

I’m Vice President on the board of CitySpace, working on the capital campaign. The Blue Room there opened in January, and I book that space. And I do the weekly Pioneer Valley Theatre News – that’s a lot of fun. 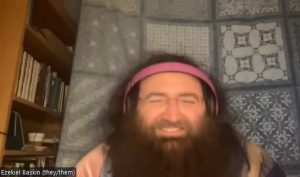 Ezekiel: My longest-standing commitment is I’m a governing member of Real Live Theater, since 2016. I’m closely involved with a number of companies. I’m on the boards of Valley Light Opera and Silverthorne Theater. I do a lot of work for them in addition to stage-managing and lighting designing for a lot of their shows. I work with the Play Incubation Collective too – I like working on developing new work.

I co-founded Theater Between Addresses during early Covid, when we were all more isolated, in order to make connections. Taking advantage of being between addresses, not having our own space, we did a show in New York and one at Three Sisters Sanctuary last summer. A short movie is maybe in the works.

I’m resident lighting designer for Pauline Productions, and also do freelance lighting design, for things like Five-College Dance. I work with Northampton High School tech students. I try to hold space for education and mentorship in the work that I do.

My day job is for New England Rural Health Association, managing a grant project about investing in rural communities to support health equity. It’s 40 hours, but flexible, and I can work remotely, which allows me to travel more.

So, when do you sleep?

Nikki: I’m incapable of functioning if I don’t get a full night’s sleep. I need the sleep, that’s my only non-negotiable thing. It’s all my waking hours that are negotiable. I work all day most days and all night most nights of the week and weekends, so I don’t have a lot of time that’s not working or doing a project, being engaged with this community in some way. My biggest hobby is my pug, my best friend, so we go on lots of walks together.

Why do you do all of this? You’re both doing much more than you have to. How much is wanting to work with a particular company, and how much is people coming to you saying, “Will you do this for us?”

Ezekiel: Some of both. I gravitate toward companies that are doing interesting work, trying to center voices that aren’t usually centered. Those things are enlivening to me, and so that defines most of who I work with and why.

I also have an agenda of collaboration in the Valley.  I always want to see more companies working together and collaborating and cooperating, instead of seeing audiences as a limited resource, but seeing the whole valley ecosystem and something we can share, something we want to see prospering and thriving. The more places I’m connected, the more I can say “You over here, talk to this person over there” –  which builds a web of people working together.

Nikki: Yes – it’s all about connections and figuring out how places can be together and what’s exciting about what’s happening. 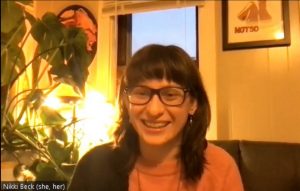 Over the years I’ve been able to be more selective. I didn’t used to have a full-time day job. Now I’m able to figure out what’s more important in how theater is happening across the Valley. The whole idea of how we connect different theaters and how we can all work together was the incentive behind starting the Pioneer Valley theater newsletter. Nobody knew what everybody else was doing, so having a centralized place would be a good step to “Let’s all see what we’re all doing together.”

I’m excited about CitySpace because I wasn’t sure I wanted to give my volunteer energy to a specific theater company, but to every theater company. And how you do that locally is by creating a way to communicate and to bring information together and then to create space. One thing that every theater company needs is a place to put a play together. Not everyone wants to do outdoor pop-up theater, so a place that is inside, that has excellent lights and sound capacity, that has flexible seating, that has accessibility because it’s affordable and usable. That’s the greatest gift that any theater company could get. So, what are the energies that I can put out that can then help everybody?

How did you both get to this point? What sparked your interest initially? – in theater generally, or this kind of work, or both?

Ezekiel: When I was like five, I wanted to be an actor. Then in theater camp, 10 or 12, I saw somebody wearing black and writing things down in the back of the room and I thought, “That person looks like they’re doing something interesting. That was my entry point into stage managing and the backstage world. And then very soon after that I met Nikki, 2009 or ’10 – I was around 15 –  and I assistant-stage-managed for her and others in her cohort. In high school I stage managed and did lighting gigs. I’m branching more recently into directing, lately going more into lighting and directing than stage managing, but I will still stage manage.

Nikki: I grew up in small town in Alaska, on the coast, went to the only school in town, and there was a little theater called Pier One Theater. I went to their theater camp every summer since I was small, and I found out that they had been increasing the age limit every year to let me still do it. Finally they said, “You’re too old for this, do you want to come teach it and hang out with us?” and I was “Absolutely! You can’t get rid of me.”

I knew I didn’t want to act, that’s too visible, but I just wanted to be in rehearsal all the time, figure out what was happening. To me the thing that was so cool was not the script part. I came to Smith, figured I would be a biologist or something, and I took a theater class and said, “Oh, alright, I don’t know what I thought I was doing here.” I majored in theater, then right after I graduated I started working with New Century Theatre as company manger, and ran the intern program.

I moved away, moved to San Francisco, ran out of money and moved back. The first show I stage managed when I came back, Ezekiel was my ASM. I found out I love being backstage and figuring out all the technical stuff that makes it happen. I love working at Smith with the students, people who don’t know what they’re doing yet, and don’t have to know yet, to help them figure out how that all comes to together and building the skills they need to go out and do what’s next.

Are there particular moments that you treasure, when you say, “Yes, I’m really glad I’m doing this”? or conversely, “Am I really sure I wanted to be doing this?”

Ezekiel: Both as a stage manager and a director – because I think of the two as a partnership in facilitating the rehearsal room – I love the feeling of when a rehearsal is going really well and everybody is in sync with each other and deepening the work in this way. That’s my favorite thing, being excited about things that are being discovered and where things are going.  I love that feeling.

Nikki: My favorite thing is tech.

Nikki: I love watching it all come together. I love seeing things that we’ve talked about in production meetings for two months come to life. It’s so fun – and fun to have new people in the room. I’m a true technician’s technician. I love actors, but technicians are my people. I love having them in the room and figuring out what we’re going to do to make this thing that’s magic move forward – the problem solving. And tech snacks are always fun – feeding everyone is important.

My favorite shows are when I have a close relationship with the director, when I can say, without stepping on anyone’s toes, “I saw this in rehearsal today, what do you think about…” The last couple of shows with Linda McInerney I’ve done that. That can be a lot of fun, figuring out how to make this thing work together.

I think it’s important for everyone making theater to value the collaboration, the collaborators they have in the room, and to bring people together. No matter what their expertise is, no matter what their job title is, isn’t really as important as the talent and skills they’re bringing to the thing. In an ideal world, where everybody is on board with whatever the art that you’re making is, you can all collaborate, without stepping on people’s toes and without hurting any feelings, to be able to say things that aren’t necessarily what your role is, and have that be a productive conversation.

The weekly Pioneer Valley Theatre News has comprehensive listings of what’s on and coming up in the Valley and beyond. You can check it out and subscribe (free) here.