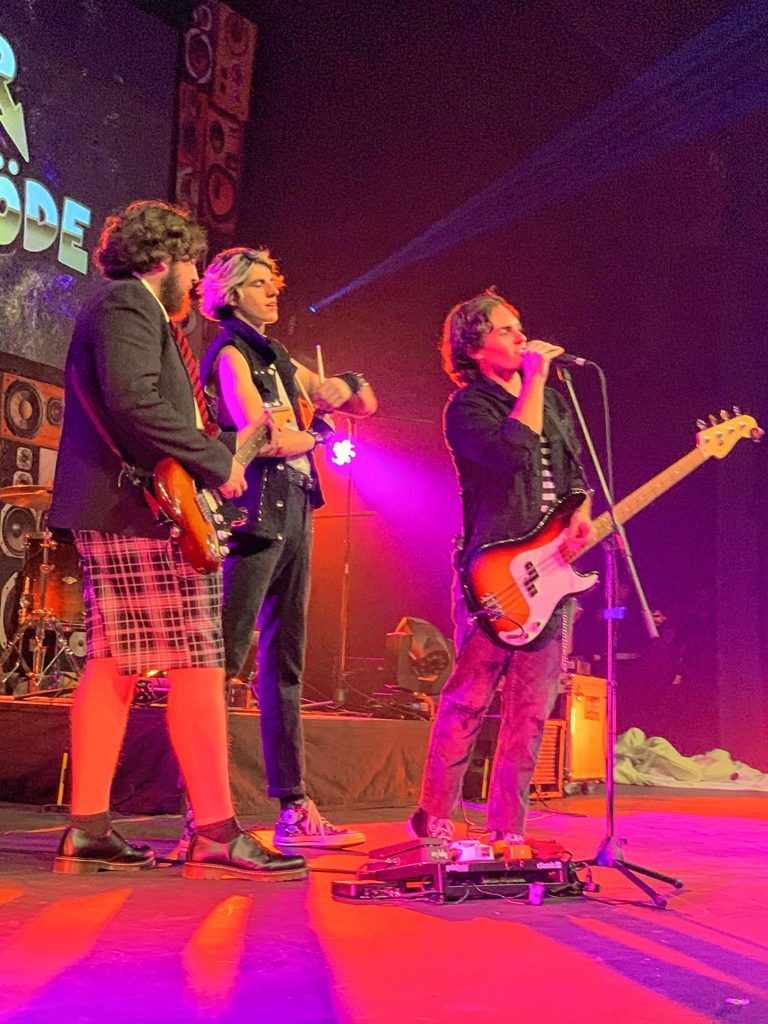 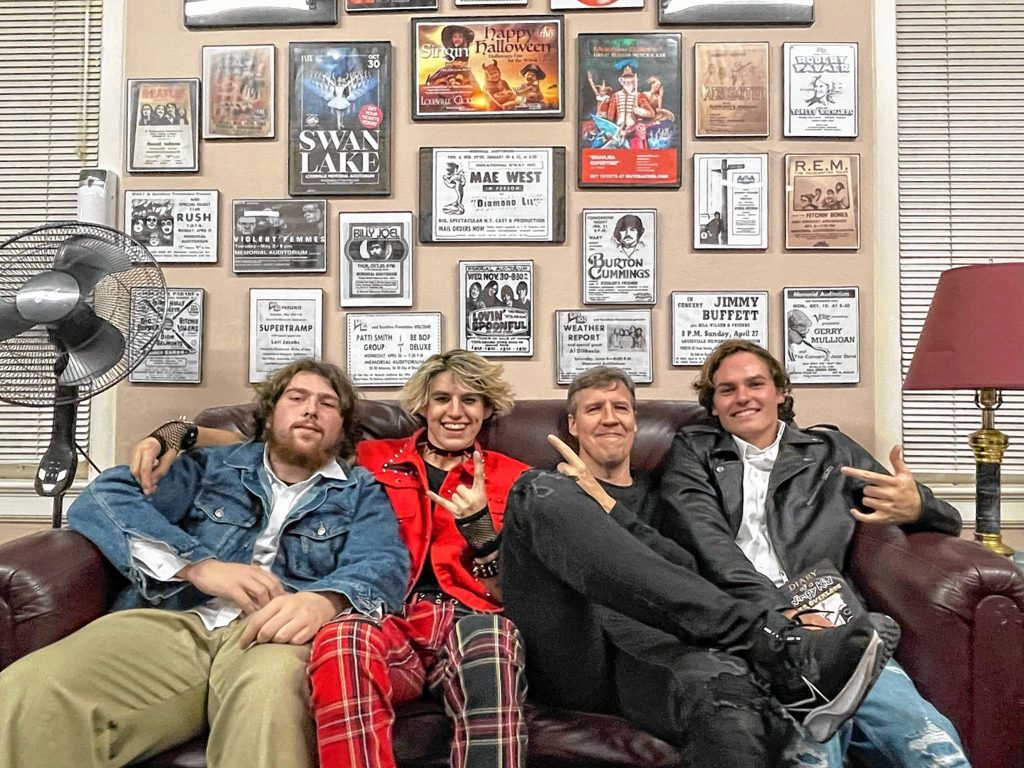 Jeff Kinney, second from right, gets into the rock and roll lifestyle with UMass Amherst rockers Reservations@8 during a tour to promote Kinney’s new “Wimpy Kid” book and movie; from left they are Peter Tuohy, Flynn Duffy and Tommy Dalton. 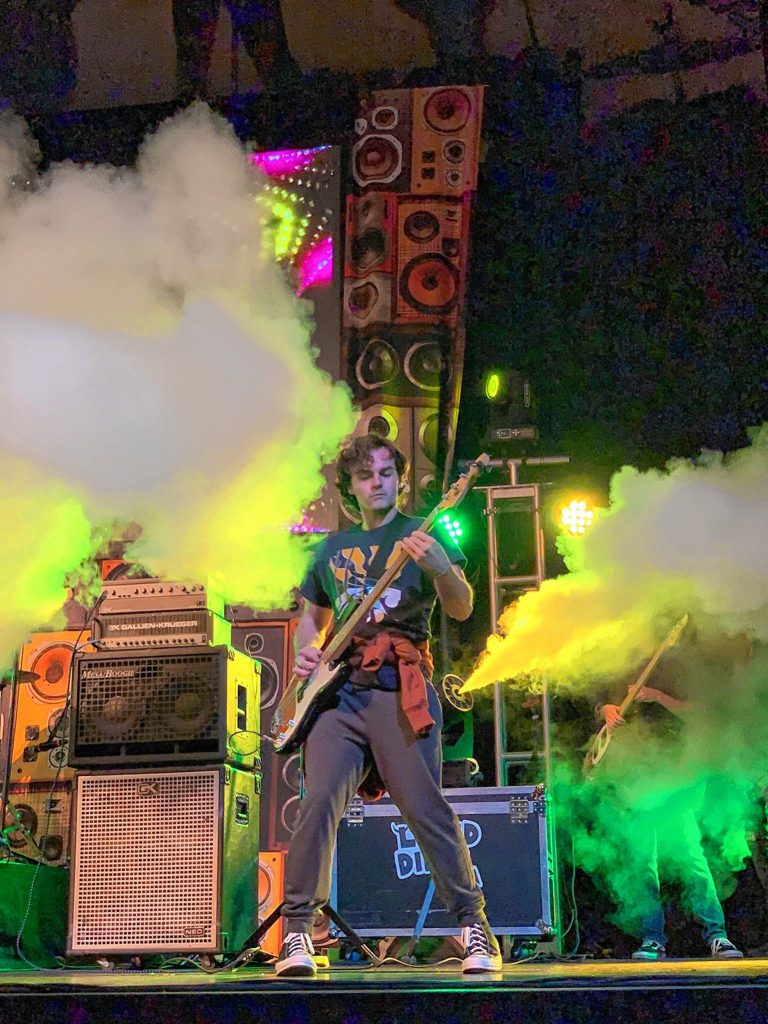 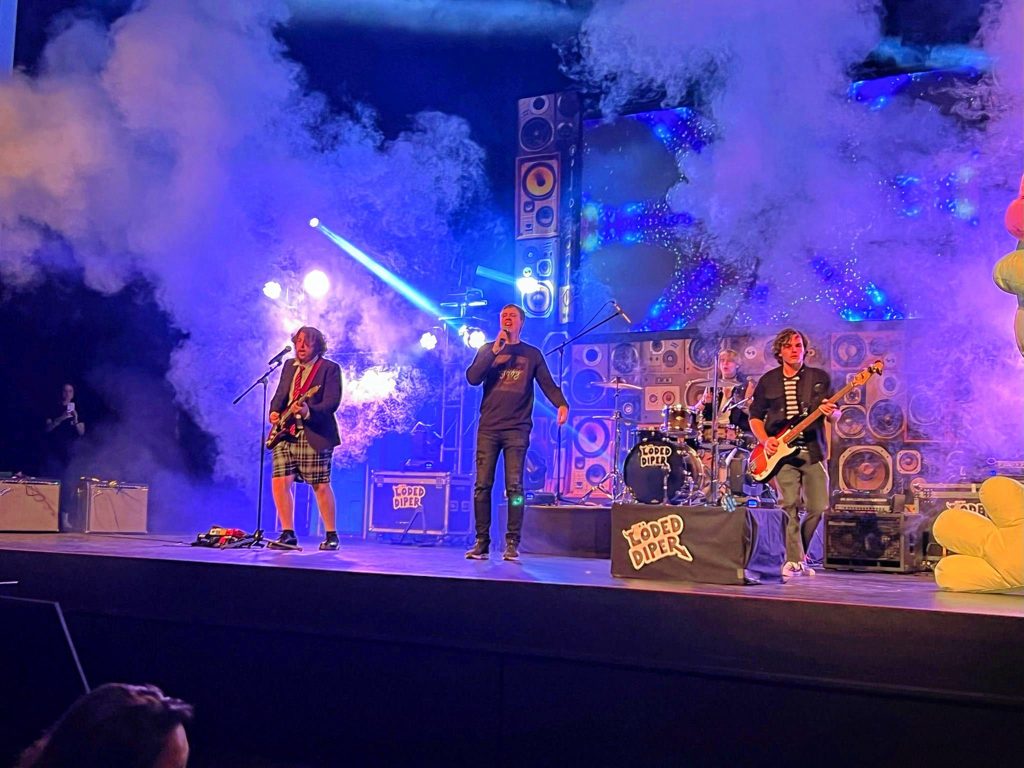 Author Jeff Kinney, center, joins the UMass band Reservations@8 on stage during the “Diper Överlöde” tour, which hit 12 cities in the U.S. in October and November. 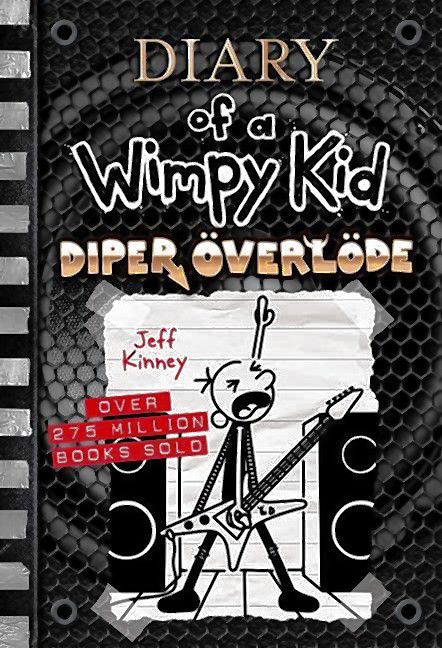 “Diper Överlöde” is the 17th book in Jeff Kinney’s bestselling “Diary of a Wimpy Kid” series.

Like so many other artists, author and illustrator Jeff Kinney felt stymied by the pandemic. The visits he’d typically make to bookstores to talk about the newest additions to his popular “Diary of a Wimpy Kid” series were reduced to parking lot encounters and other ad hoc arrangements because of COVID-19.

But with conditions improving this year, and a new Wimpy Kid book, “Diper Överlöde,” under his belt, Kinney was looking to do something different. He was also looking to plug a new animated movie, based on one of his earlier “Wimpy Kid” titles, that was in production.

Since both new works revolved in part around the theme of a grungy teenage garage band trying to make its mark, thought Kinney, why not bring a band on tour with him for some concert-style events and activities?

That’s just what Kinney, of Plainville, ended up doing — with a band whose members are all students at the University of Massachusetts Amherst.

Reservations@8, made up of sophomores Tommy Dalton and Peter Tuohy and freshman Flynn Duffy, joined Kinney for a 12-city tour in the U.S. in October and November, playing songs from “Diary of a Wimpy Kid: Rodrick Rules,” an animated film that debuted this month on the Disney+ channel.

From Cleveland to Nashville to New Orleans and Dallas, the trio entertained audiences, including playing the movie’s signature song, “Can You Smell Us Now?” for which Kinney wrote the lyrics.

“It was a great experience,” Duffy, a drummer, said in a recent group phone call. “To get to play in front of a different audience every night was probably the best part of the tour.”

And Kinney, who’s now written 17 “Wimpy Kid” books, says the opportunity to do a book tour along very different lines — to “elevate the form,” as he put it during a recent phone call — without all the restrictions imposed by the pandemic was “just a thrill. It was a challenge but fun and very different, really just a blast.”

Born in 1971 in Maryland, Kinney became a huge name starting in the mid-2000s when he began publishing his “Wimpy Kid” series, which now have sales in excess of 275 million copies. Time magazine has named him one of the 100 Most Influential People in the World, and six of his books have now been turned into films — two animated versions and four live-action versions.

The books and movies are based around Greg Heffley, a skinny middle-school student who records in droll fashion his various misadventures at home and school; his journal includes plenty of simply drawn but funny cartoons by Kinney.

One of Greg’s biggest headaches is his older brother, Rodrick, a high school student who plays drums in a not particularly talented metal band, “Löded Diper,” and enjoys making things difficult for his little bro.

In the new “Wimpy Kid” book, Greg is looking for some way to raise his stature, so he decides to tag along with Rodrick’s band as they attempt to win their own degree of fame through a few gigs and a recording session. But as the book’s tagline puts it, Greg learns that “late nights, unpaid gigs, fighting between band members, and money troubles are all part of the rock ‘n’ roll lifestyle.”

When he starting thinking earlier this year about making live music part of a promotional tour, Kinney posted a video on TikTok describing his plan and inviting high school and college rock bands to submit videos of their performances. When the members of Reservations@8 saw that, they were all in, said Dalton, the band’s bass player.

“We all liked the books,” Dalton said. “I read the first six in the series, and Peter’s probably the biggest fan … this seemed like a great opportunity.”

They also had a connection of sorts to Kinney. All three of the band members graduated from high school in Wrentham, where they first began playing music together, and they knew Will Kinney, Jeff’s older son, who also went to that high school.

In fact, Jeff Kinney says Will had told him about Reservations@8 before he viewed their audition tape, “But I was kind of dismissive. I didn’t want it to seem like there was some kind of favoritism involved in this.”

But when he watched their tape, he says he was impressed “with their musicality and with their enthusiasm.” His perceptions were reinforced when he met with the band members in a video chat and then in person.

One of the stipulations for Reservations@8 going on tour was that the members not fall behind in their studies. But Tuohy, the group’s guitarist and lead vocalist, says they were able to do that by looking at online material; they used down time on the tour for doing homework and other assignments.

“Jeff was pretty insistent about us doing our homework,” Duffy added.

Perhaps their biggest challenge was learning the music to “Can You Smell Us Now?” since their only time to rehearse was “usually after 9 at night when we’d have to find a vacant classroom,” Duffy explained. Other songs they performed on tour included well-known rockers like Joan Jett’s “I Love Rock and Roll.”

The new song’s music was written by John Devine and is performed in the movie by Jimmy Tatro. Kinney wrote the lyrics, which spoof the heavy metal scene and teenage potty humor with lines like “Can you smell us now? / We’re bleedin’ through your speakers like a chocolate cow! And now you rockin’! / Corrupting your brains! / Jellies are knocking! / And you’re going insane!”

Kinney’s not just writing books (and satirical song lyrics) these days. He co-wrote the screenplay for the fourth film adaptation of one of his “Wimpy Kid” books, “The Long Haul,” and he’s the sole screenwriter for the two most recent films, including “Rodrick Rules.”

“I learned a lot about the movie-making process through the first four films,” said Kinney (these were the live-action versions). “And when I got asked to write some of the screenplays, that was a real privilege. I think it’s made me a better writer, to learn how to structure a story in which events really resonate and inform the central plot, and you have these emotional connections.”

For “Rodrick Rules,” for instance, he’s taken elements from the book, the second in the series, but modified the story to build a stronger narrative around the relationship between Greg and Rodrick, in which family connections do count for something.

Between the screenplay writing, the new “Wimpy Kid” book, and the recent book and movie tour, Kinney says he’s had “a really good time.” And, he adds, “I couldn’t have done it without (Reservations@8). They were just great.”