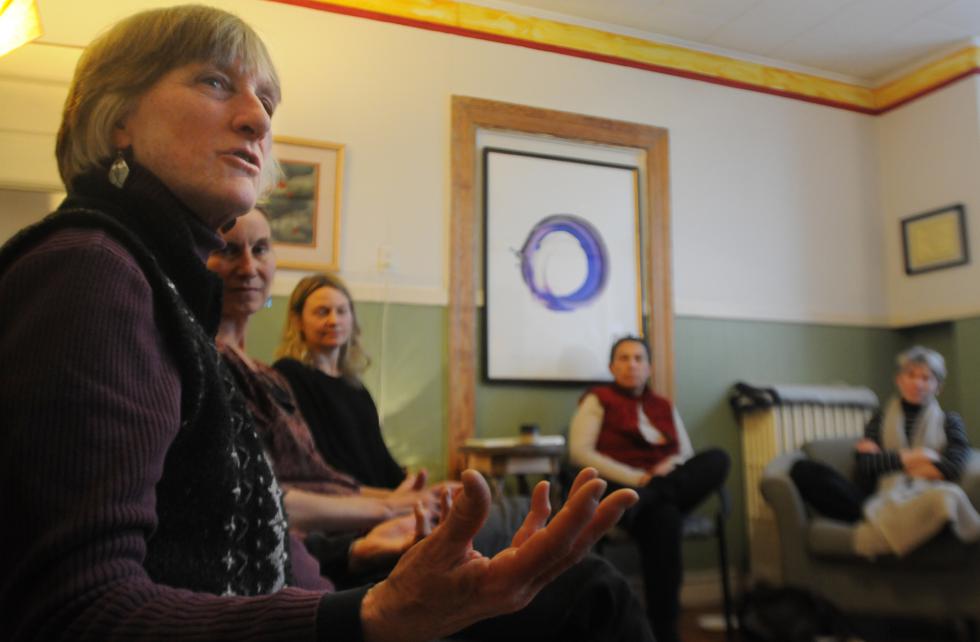 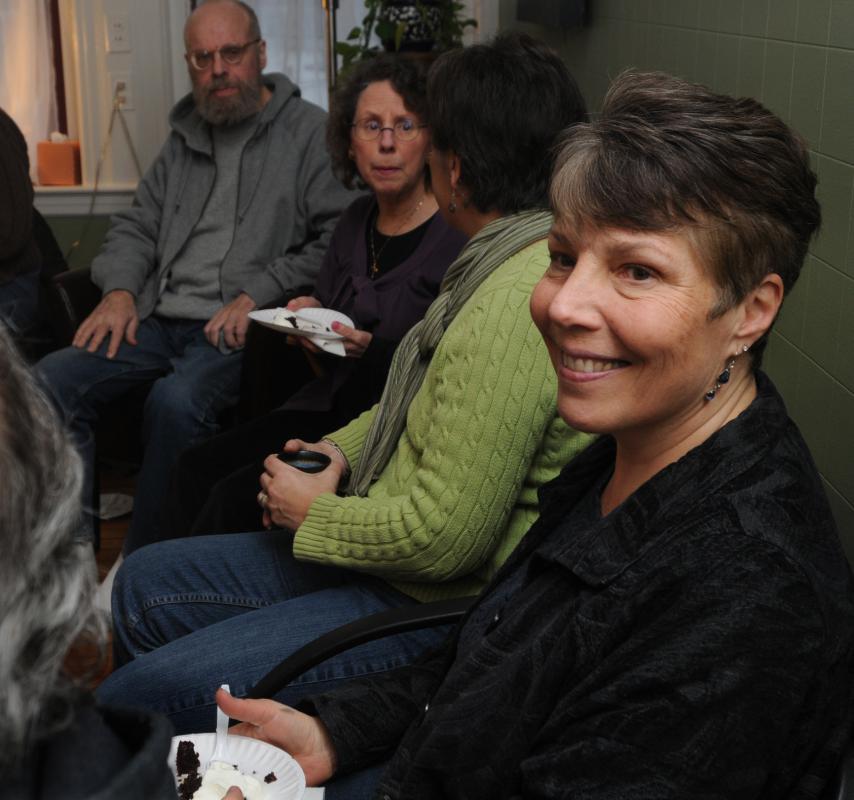 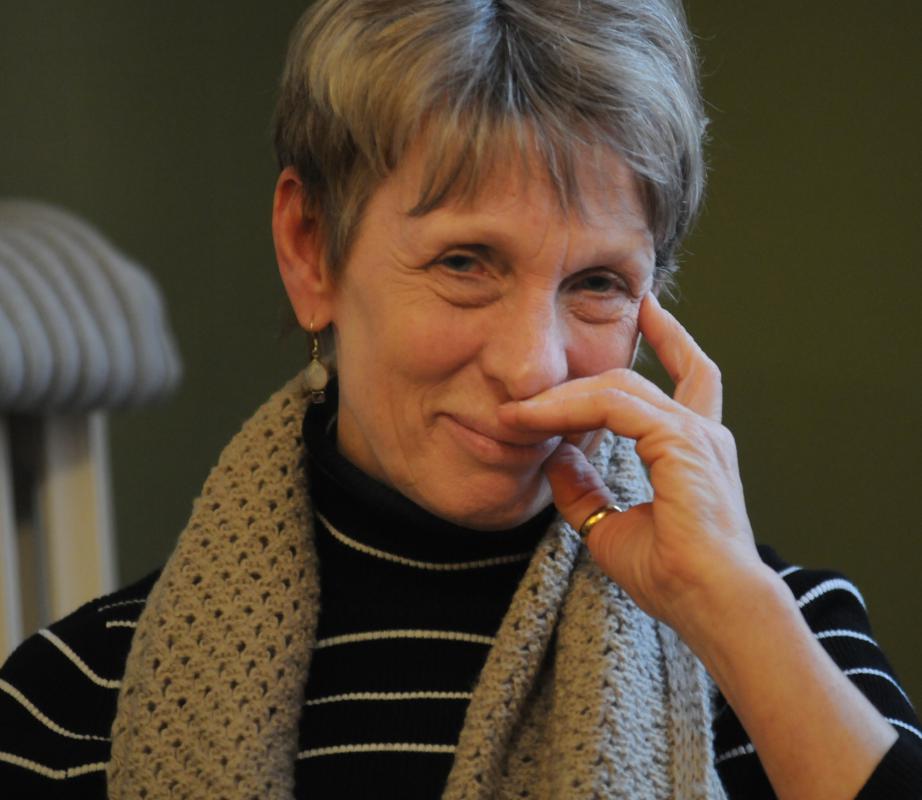 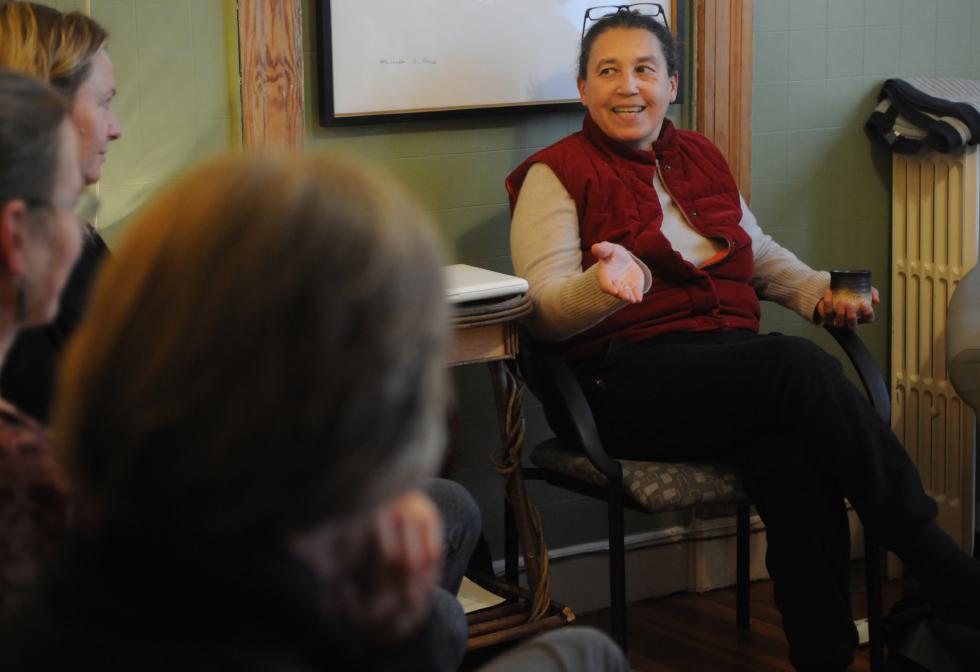 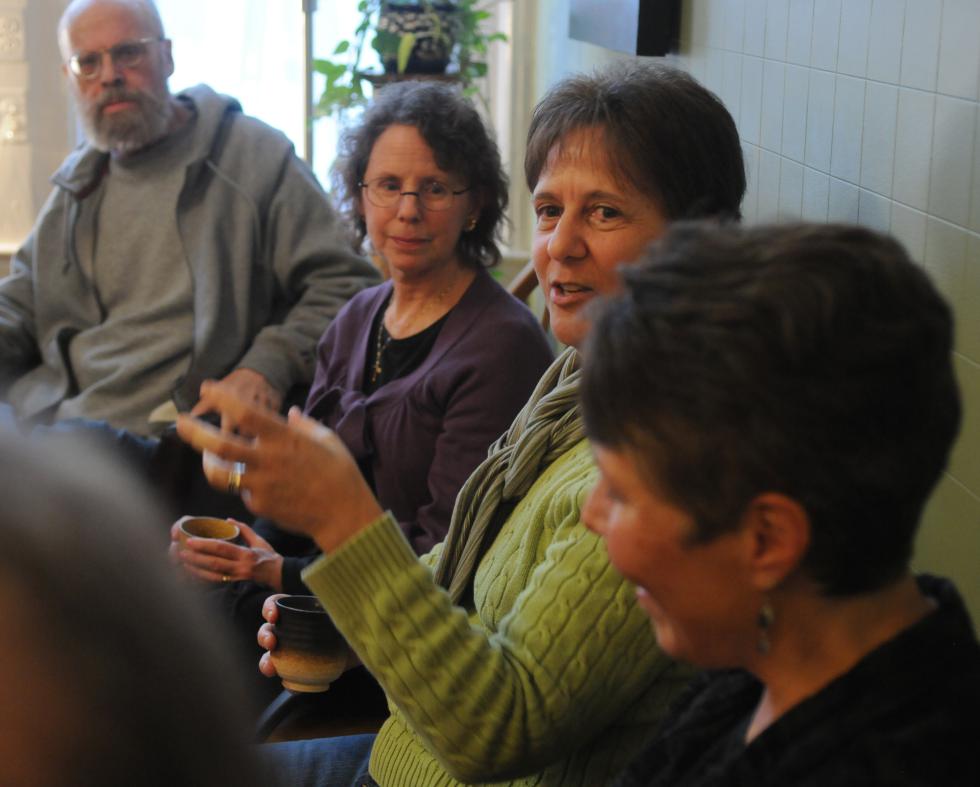 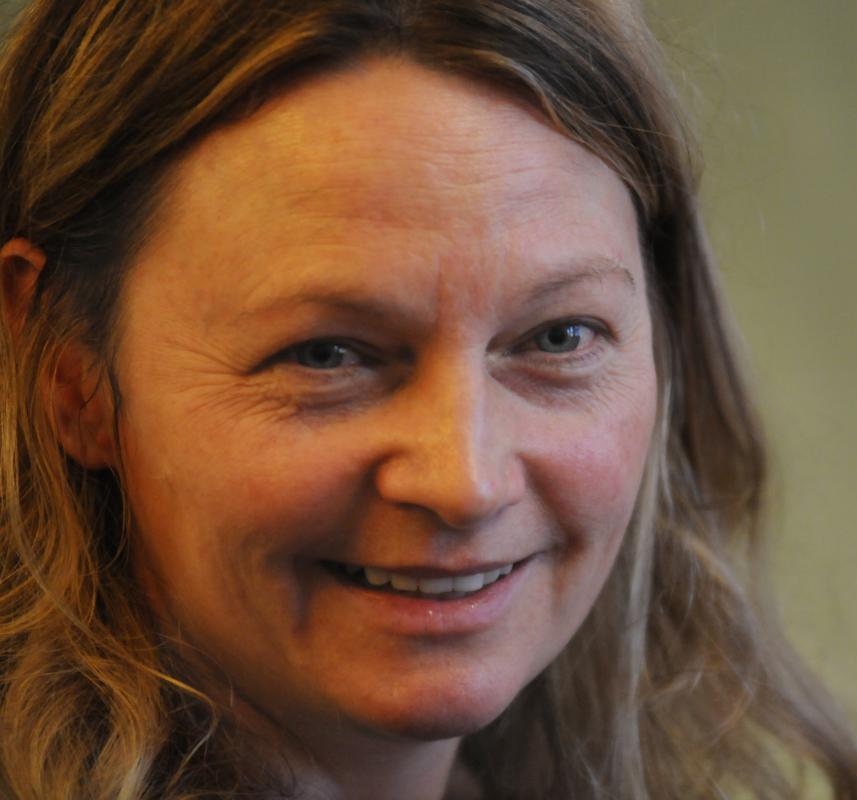 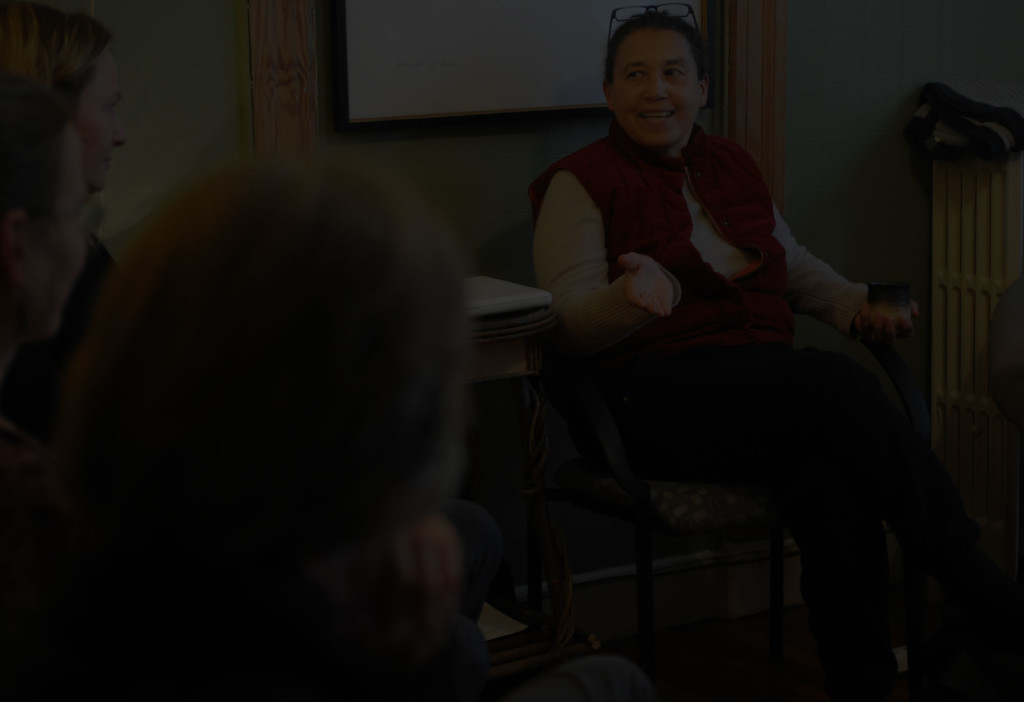 At a recent gathering in a second-story studio in downtown Northampton, Daniel Lombardo of Westhampton read a story about twin fetuses discussing life after birth. One thinks there will be life after delivery, related Lombardo, while the other isn’t so sure.

“Nonsense,” says the naysayer. “What kind of life would that be?”

“I don’t know, but there will be more light than here,” the other replies. “Maybe we will walk with our legs and eat from our mouths.”

“That’s stupid,” the first one says. “Delivery is the end of life, and in the after-delivery there is nothing but darkness and silence and oblivion.”

“But certainly we will meet Mother,” answers the second, “and she will take care of us.”

The first laughs. “Mother? You actually believe in Mother?”

Some of the dozen people listening chuckled, others nodded.

While Lombardo’s story by Czech psychiatrist Jirina Prekop was about birth, it offered a different perspective to those who had come to the Body-Mind Zen Temple to talk about death.

“None of us are experts on death, because none of us have experienced it and returned to tell the rest of us,” said Ryumon Hilda Baldoquín Sensei, a teacher at the Buddhist center Two Streams Zen in Westhampton.

Those seated in a circle on folding chairs included several Buddhists, a practicing Episcopalian, and a few people who were raised Catholic. While one participant was in her 20s, the majority of those in the group were approaching senior citizenship. Several had worked with hospice.

They were participating in what is called a Death Cafe, based on similar gatherings occurring worldwide, where non-secular groups talk — generally over tea and cake — about the end of life. The meetings started in 2011, and have become increasingly popular both internationally and locally. There have been at least three in Hampshire County in the past year.

“Death Cafes are for those reflecting on personal loss, and for those interested in exploring how being more aware of death impacts how we live,” said Ryumon Sensei.

Video: Why I go to Death Cafes

At the gathering that Sunday, nearly everyone spoke from personal experience, based on the death of a family member or a close friend.

But most of the conversation revolved around the mystery of death. Is there such a thing as a good death? How can our culture better allow people to mourn their loved ones? What happens when we die? Do you believe in an afterlife?

Karen Banta, who is married to Lombardo, said she believes in an afterlife. “I’m comfortable with the mystery. It’s special, it’s supposed to be mysterious,” she said. “I don’t need proof.”

Catherine Anraku Hondorp Sensei, also a teacher at Two Steams Zen, said that people often bring presumptions to their view of death. The death of a young person, or a sudden and unexpected death is usually considered more tragic than that of an older person whose health had been in steady decline.

“But how can we say someone’s death isn’t perfect?” she asked.

Carol Rogers of Belchertown agreed: “There is no hierarchy of death.”

Laura Hummel of Hatfield pointed out that many companies are now seeing bereavement leave as separate from sick time and are trying to determine the appropriate number of days to designate. One company, she said, had settled on three.

Alan Teschetter of Buckland, who said he was still grappling with the death of a close family member, had another question: “How soon do you have to use them?”

Dealing with the difficult

“Talking about death, no matter how you slice it, is fringe work,” Northampton psychotherapist Jonathan Stein said in an interview a few days before the Northampton event. Stein, who did not attend that meeting, has hosted two Death Cafes at the Wild Life Sanctuary Studios in Florence, and has a third planned for this Saturday, March 7, at that same location.

“We live in a death-phobic culture,” he said.

In his practice, Stein explores the link between people’s physical ailments and their fears about the economy, the environment, getting old, feeling pain. He sees Death Cafes as an extension of his work.

“People are relieved to have a place to talk about death,” he said. “Knowing you’re going to die, the question then becomes, how do you want to live? Death gives more meaning to life. It helps us to live more fully.”

Stein said that the first two cafes he hosted were lighthearted, even though the conversation was focused on a topic most consider morbid.

“People were hesitant at first, but as the conversation continued, the energy change was palpable,” he said.

“Talking about death identifies the elephant in the room, so it gets smaller,” Zesiger said. “Dealing directly with things, like the monster under the bed as a kid, makes them less ominous, less scary.”

Zesiger said the name Death Cafe puts some people off. “But anyone who goes to one has gotten over the stigma of using the term death,” he said. “I don’t think it’s too rough a name. We need to get over the word.”

Zesiger said the people at the cafe he attended seemed hungry to talk about something meaningful in their lives. “It’s not like a cocktail party where people don’t talk about their feelings,” he said. “People really listened. The three hours went by in a flash.”

“I practice Zen meditation there and more than a year ago I happened to be talking to Ryumon Sensei about my struggle with coming to terms with death,” he said. “I had recently turned 60, and found death was no longer a vague mystery that I could comfortably stand apart from. ’Til then I had been content without answers to questions about the next life.”

The model of a Death Cafe was developed in 2011 by Jon Underwood of London, who had read about the Mortal Cafes that Swiss sociologist Bernard Crettaz had organized in Paris. Crettaz, Ryumon Sensei said, wanted to bring death into everyday conversation by holding discussion groups in public.

The first Death Cafe was held at Underwood’s home that September. It was led by his mother, the psychotherapist Sue Barsky Reid.

Underwood and Reid created a guide for those who want to run their own Death Cafes in February, 2012. Over 1,500 cafes have been offered worldwide over the past three years through their website, www.deathcafe.com.

The first cafe in the United States was organized by Lizzy Miles and Maria Johnson, who both worked with hospice. Their cafe was held in Columbus, Ohio in July 2012.

Each Death Cafe differs from the previous one. There is no predetermined direction for the conversation, so long as the topic is death.

Ryumon Sensei said the Northampton cafe was “authentic, spirited, warm and open-hearted,” similar to the one Two Streams Zen hosted in Westhampton last November which drew 19 people. Only about a third of those people knew each other beforehand, she said.

At the Northampton session, only four of the 12 were returnees.

“We told funny as well as tragic stories, Lombardo said afterward, who added that the Mexican chocolate cake with whipped cream was a highlight.

“It was a profoundly rich experience. The contrast between the way a 20-something and a 70-something think of death is instructive,” he said. “We explored so many facets of death — and life. The possibilities for the cafe are limitless.”

The teachers at Two Streams Zen and Jonathan Stein say they hope to hold Death Cafes more regularly. Ideally, they said, there would be one every month or two.

“We are experts on distracting ourselves from the truth that we are going to die,” said Ryumon Sensei. “In the entire history of human existence, there is no one who has not died, yet I continue to delude myself into thinking that I might be the exception. But death is the great equalizer and it begins at the moment of birth.”•

People interested in attending Jonathan Stein’s Death Cafe this Sunday can contact him at www.jonathanstein.org. Those seeking more information about the next Death Cafe organized by Two Streams Zen can contact the group at www.twostreamszen.org.