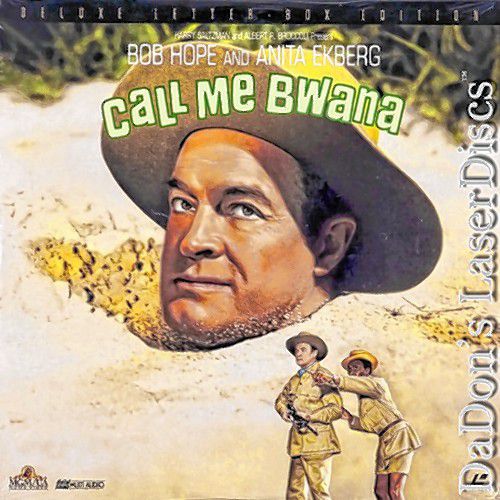 Let’s take a trip in the Wayback Machine to the early 1960s. The British company Eon Productions has just been accorded the honor of producing a series of films based on the Ian Fleming James Bond novels, starting with Dr. No.

But there’s a catch. The contract says Eon must produce one non-Bond film as well, perhaps a feature starring that sensational new group The Beatles. Who would say no to a Beatles-and-Bond deal?

But some shrewd studio executive comes up with an alternate plan: Why film four long-haired kids when you can have Bob Hope?

And that’s how Call me Bwana was born. Hope plays Matt Merriwether, a book writer who passes off the exploits contained in his uncle’s African diary as his own.

Figuring he’s an expert, U.S. government officials send Merriwether to Africa to retrieve a top-secret moon rocket that has crashed in the midst of the homeland of a fierce African tribe.

Word has it that the script was written on the fly while filming was going on, and I wouldn’t argue with that. At one point, Hope chances upon Arnold Palmer playing a round of golf in the middle of the African bush. Palmer lets Hope use clubs left there by some guy named Crosby. Crosby himself was wise enough to skip this paycheck and stay home.

When Hope and a baby elephant bond because of their common large probosces, it’s worth a chuckle. But when Hope, dressed like a chicken, is trapped with Ekberg in the now-functional moon rocket, the gags crash-land. Out of Africa is a knee-slapper compared to this scene.

Even so, Hope’s one-liners do help save this safari slag. When agents give Merriwether a cyanide capsule, telling him death will be instantaneous, Hope quips: “Good — no side effects.”

When well-proportioned Luba informs Merriwether that her resistance to his manliness is collapsing, our hero retorts: “Everything else seems to be holding up okay.” And, when asked what he will tell President Kennedy should he survive the mission? “Tell him I voted for Nixon” (supply your own laugh track).

The folks at Eon Productions wisely never made another non-Bond movie. A Hard Day’s Night was filmed by a rival company. Can you guess which movie raked in the big bucks and which tanked?

The connection between Bond and Bwana did not end there, however. In From Russia With Love, an assassin working for SMERSH hides out behind a giant billboard advertising Call Me Bwana and is killed as he attempts to escape through Anita Ekberg’s mouth. Likely something could be made of this, but I’ll be darned if I know what it is.