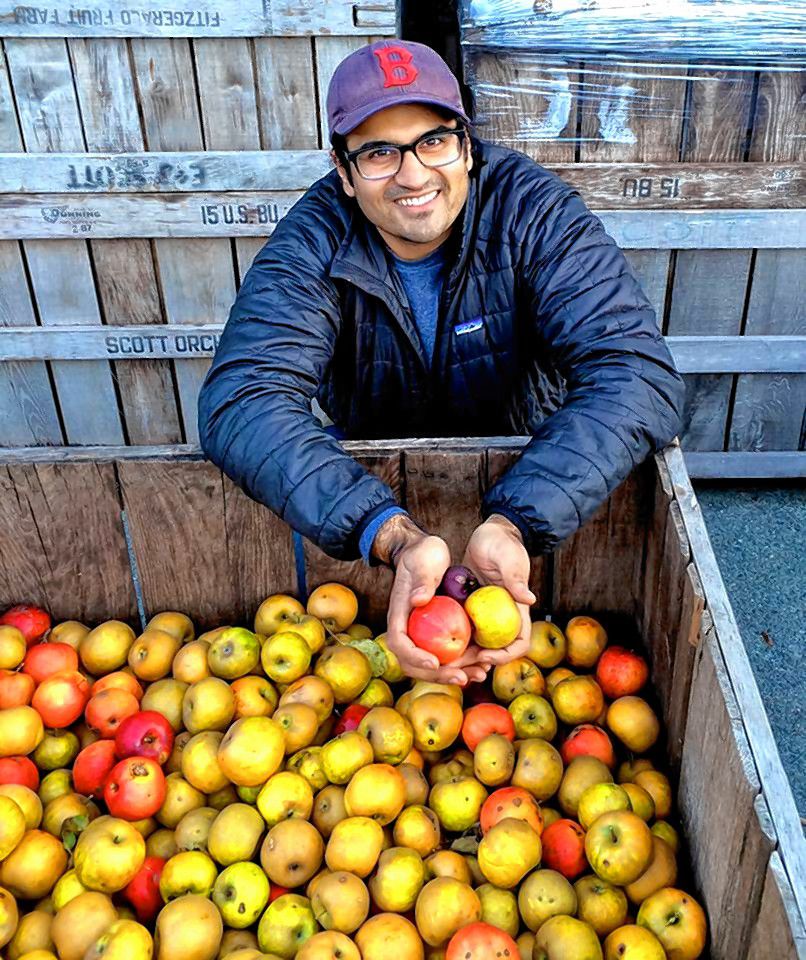 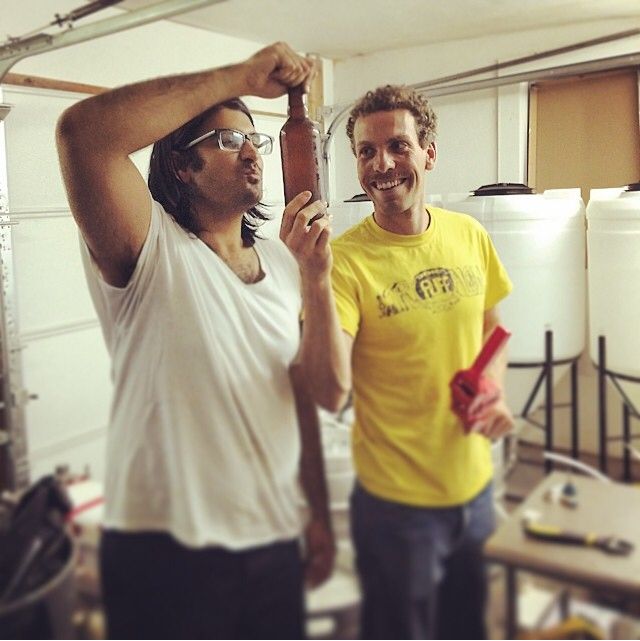 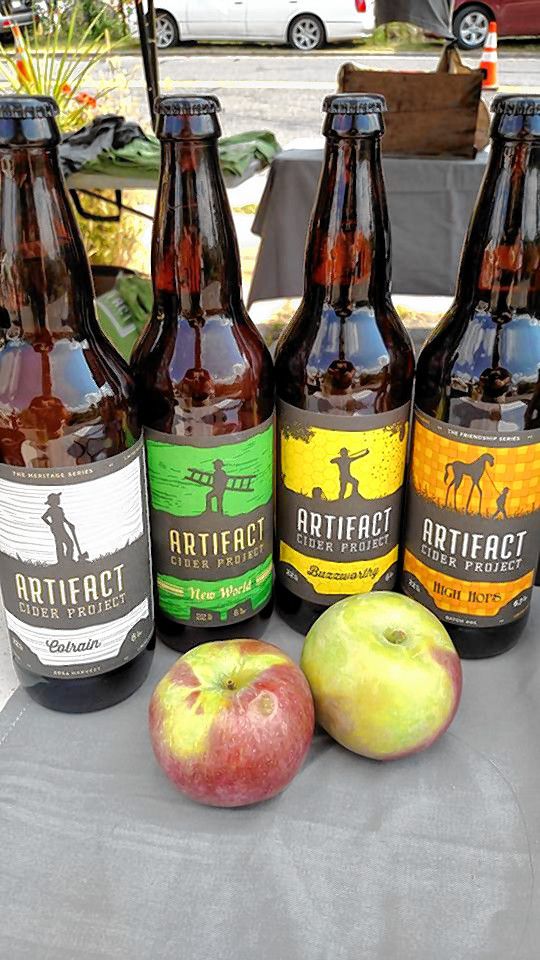 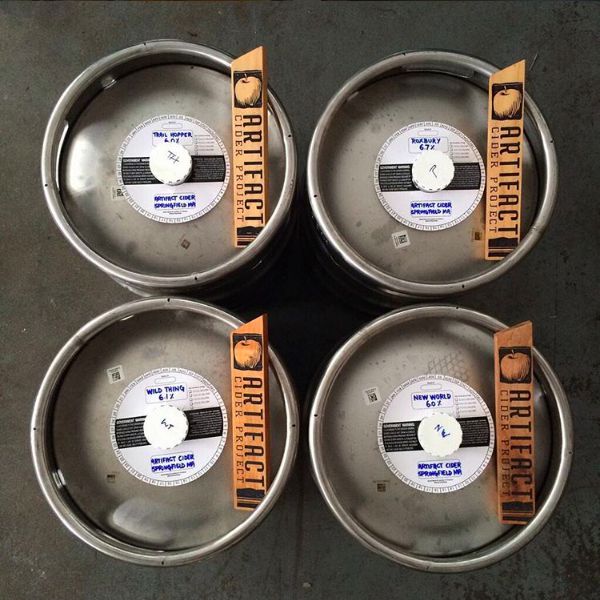 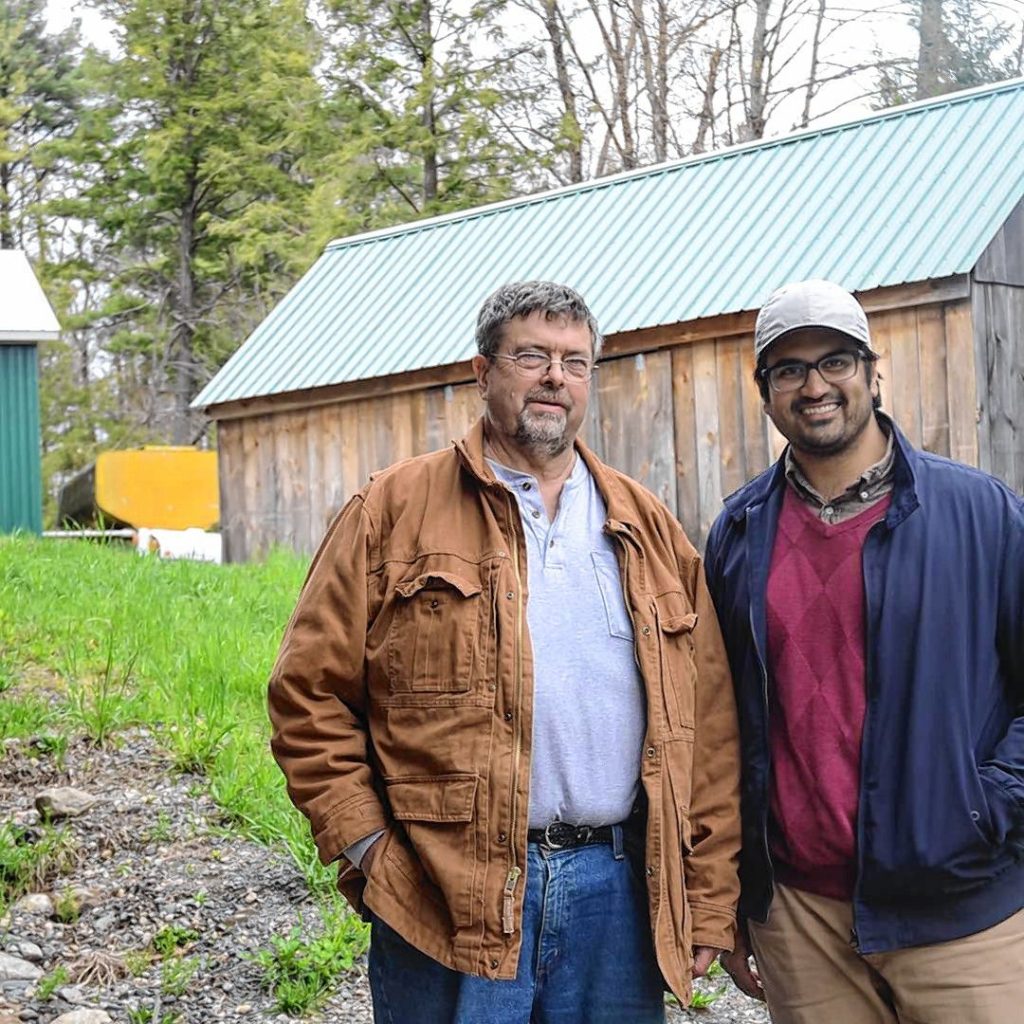 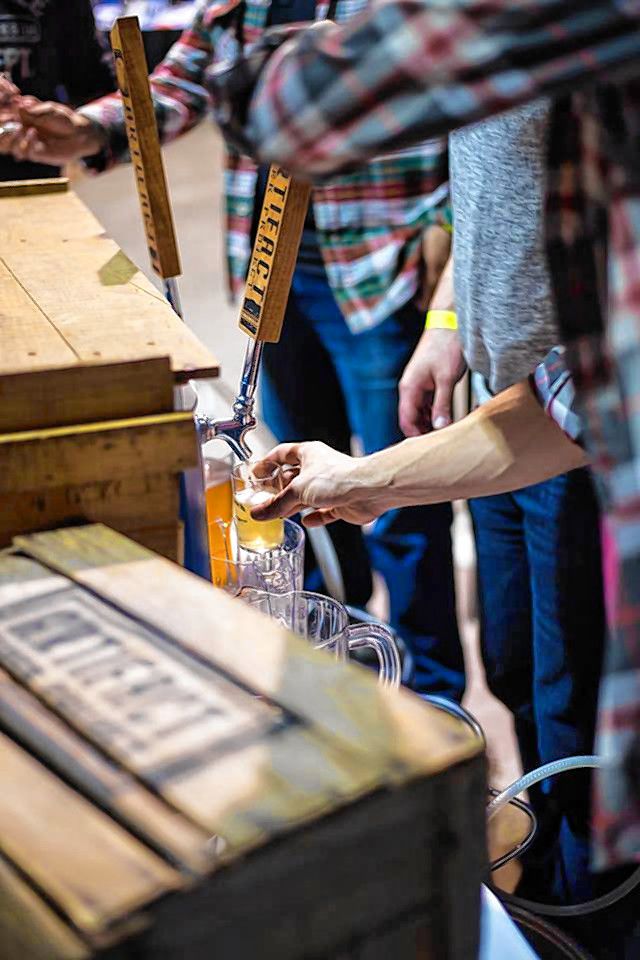 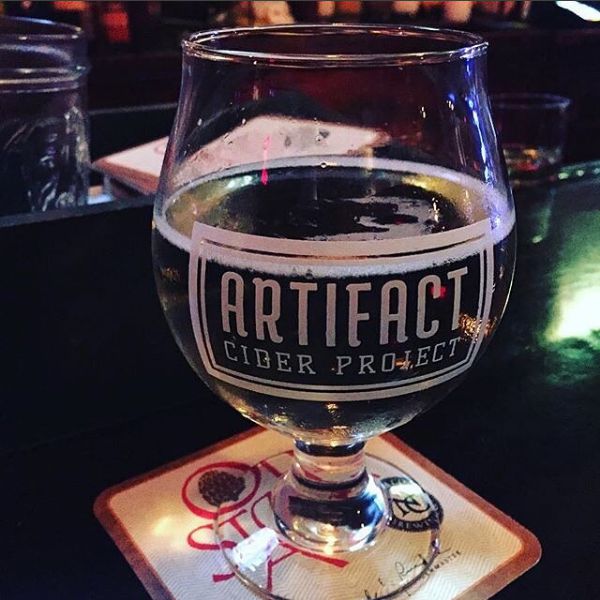 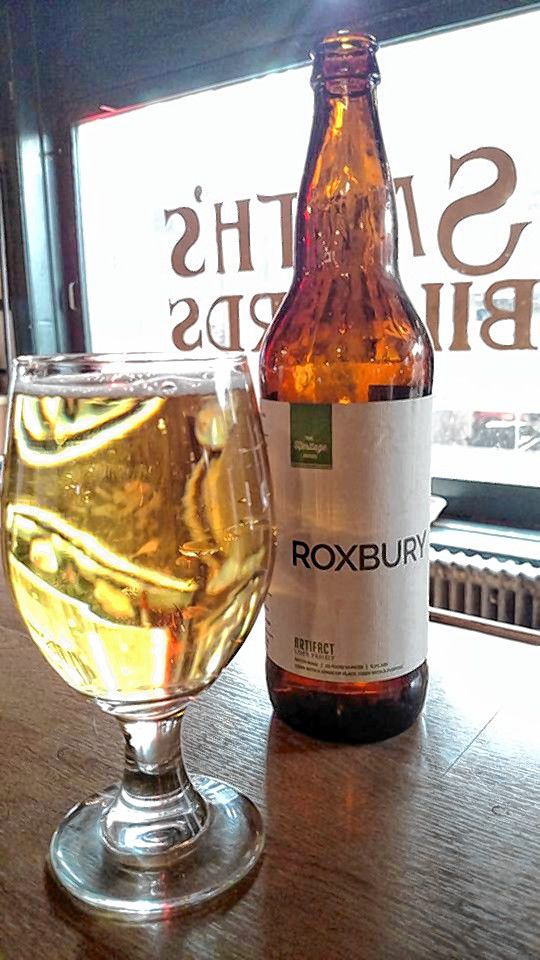 A scientist and a farmer walk into a bar.

The scientist orders a pint of craft beer, locally made and small-batch brewed. The farmer, on the other hand, can’t drink beer — he has just been diagnosed with Celiac disease, an autoimmune disorder caused by a reaction to the gluten protein found in wheat.

But the scientist and the farmer have stuck together since their elementary school days, so the scientist begins drinking cider too. Ever the good researcher, he spends his spare time Googling local ciders, and eventually he stumbles onto the website for West County Cider in Colrain.

It is an unfamiliar town, far from the madding Boston crowd. Still, he locates a bottle of it, meets up with his buddy, and pops it open.

It was an “a-ha moment,” recalls Soham Bhatt. “I remember drinking that bottle together — it was like champagne. It was dry and refined, the opposite of what we had been drinking. And West County had already been making craft cider for decades!”

“It kicked off a lot of curiosity in us,” he adds. “Suddenly, we saw a whole culture that we could get into.”

That was in 2008. Since then, Bhatt and his friend Jake Mazar have proved that a career in hard cider is no joke. Intrigued from a young age by the idea of someday starting a business together, Bhatt and Mazar founded the Artifact Cider Project in June 2014.

The hard cider company, which is based in Springfield, was launched entirely from their own savings — Mazar estimates that the two each contributed about $15,000. Artifact has since taken out a few bank loans, and in 2015 the company received a $20,000 development grant from the Valley Venture Mentor’s Accelerator Program.

Today, Artifact has five part-time staff members — Bhatt lives in Cambridge and continues to work as a biotech engineer by day, while Mazar now lives in Amherst and runs the traveling Wheelhouse Farm Truck — but last year’s output was impressive: 12,000 gallons of cider sold on tap and in bottles at more than 40 restaurants and 80 stores across Massachusetts.

The mission is to revive, reinvent, and reintroduce American craft cider. To that end, Artifact currently produces three “annuals,” available year-round — the juice for which is primarily sourced from Pine Hill Orchards in Colrain.

“New World” is the cidery’s signature product, a fresh take on an old-world blend of Baldwin, Northern Spy, and other heirloom apple varieties. “Wild Thing” is, naturally, a wild-ferment cider, meaning that fermentation occurs via the yeast already present on the apple skins, rather than from a Portuguese wine yeast that Bhatt sometimes adds during the cider-making process. And “Buzzworthy,” while named for a certain oft-overused cider flavoring, is actually bone-dry rather than sweet, with only the smallest touch of local apple blossom honey.

Another recent cider, which quickly sold out, was “High Hops,” a collaboration with area brewer Matthew Steinberg that folded in the grapefruit-y tang of Galaxy hops for some added aromatics. Bhatt and Mazar say that more local collaborations are in the works.

“For me, this all centers on the fact that cider is an agricultural product,” Mazar says. “I find so much personal meaning in food, and in the community around food … One hundred percent of our cider comes from this area, which keeps us rooted in place.”

Bhatt relates to this sentiment. “We may get bigger, but we want to grow with the orchards,” he says. “We want to make sure we can access the best fruit. I don’t want to grow too fast, or start buying apples from Washington. They need to grow here — that’s important to me.”

This led to the creation of the Heritage Series, an ongoing collection of ciders that bridge the past and the present by taking advantage of some of New England’s oldest, and largely forgotten, varieties. After a limited run of cider made from heirloom apples at West County Cider’s Catamount Hill Orchard — to which Bhatt added some spices and maple syrup — Artifact debuted “Roxbury,” a batch made from the 17th-century variety Roxbury Russet.

Craft cider sits in a peculiar middle ground between wine and beer, Bhatt says. “It’s apple wine, fundamentally. But it’s carbonated and consumed in large glasses, like beer, at bars and pubs. It can be a refined thing, but it doesn’t have to be — it’s versatile.”

Cider resembles beer, too, in its lower alcohol content, since apples have less sugar per unit than grapes do. Most of Artifact’s ciders are around 6% ABV (alcohol by volume), whereas most wines fall between 12 and 15% ABV.

Misconceptions persist, says Mazar, who runs the table at many of Artifact’s visits to festivals and tastings. “I don’t think the average consumer really knows what these ciders are. In certain communities, cider IQ has risen dramatically in the past few years. But people still ask me: what kind of beer is this? Apple beer?”

Mazar describes New World, which Artifact released first, as polarizing. “Many people hadn’t had anything like it. The perception that hard cider should taste like apple juice is still widespread, even though most people know that wine doesn’t taste like grape juice.”

That’s surely due in part to cider’s limited presence in the American beer and malt beverage landscape. According to the stats and data blog FiveThirtyEight, cider held roughly 1 percent of market share by the end of 2014 — although this indicates strong growth from a share of just 0.2 percent in 2011, thanks primarily to the success of Boston Beer Company’s line of Angry Orchard hard ciders, which debuted in 2012.

Those big commercial ciders are heavy on sweetness, Bhatt says. “And that might show really well in a study or a focus group. But as artisanal cider-makers, we have a little more latitude to experiment and take risks.”

Bhatt says he has a few dozen ideas for future cider batches. But he’ll have to take it one step at a time, since Artifact’s home — a fairly small garage space in the Gasoline Alley complex on Albany Street — can only hold so many 250-gallon tanks at a time.

During a recent visit to headquarters, Bhatt points out several tanks filled with an upcoming cider inspired by kir, a popular French cocktail made from creme de cassis (black currant liqueur) and white wine. Normandy and Brittany are cider-making regions of France, Bhatt explains, so a classic “kir Normand” or a “kir Breton” is made with dry cider rather than wine. Artifact’s riff on that will be dry cider lightly blended with locally-sourced black currant juice. “I’m not big on added flavors,” Bhatt says, “but this will be a fun collaboration — more of a throwback to a cocktail than a sweet flavored cider.”

The company is also committed to making more single-origin ciders, Bhatt says, pointing to some oak barrels and a pair of tanks across the room. “The juice in that tank is heritage fruit from one very small orchard in Buckland — Winesaps, Ashmead’s Kernel, Golden Russets, Roxbury Russets. That will be a nice, complex cider.”

Another tank holds juice from an orchard in Petersham, which combines Empires, McIntoshes, Westfield Seek-No-Furthers, Winesaps, and Hubbardston Nonesuch. Both single-origin batches, he says, have been wild-fermenting all year, “just sitting there and naturally developing flavor.” Both will represent a specific orchard on a specific year — as Bhatt puts it: “a crystallization of a time and place.”

Some great craft ciders are sweet; some are dry. The best, Bhatt says, are both balanced and complex (a notion familiar to wine lovers). The real point, of course, is to show off the quality of the fruit.

“I came into this with a decent amount of knowledge,” Bhatt says, “and I fooled around at home for years making stuff. But your whole perspective changes once you start making big batches like this. You learn lessons the hard way sometimes, but that’s part of the process. When it works, it gives people pleasure, and it supports the orchards. At the end of the day, that’s what makes me happy.”