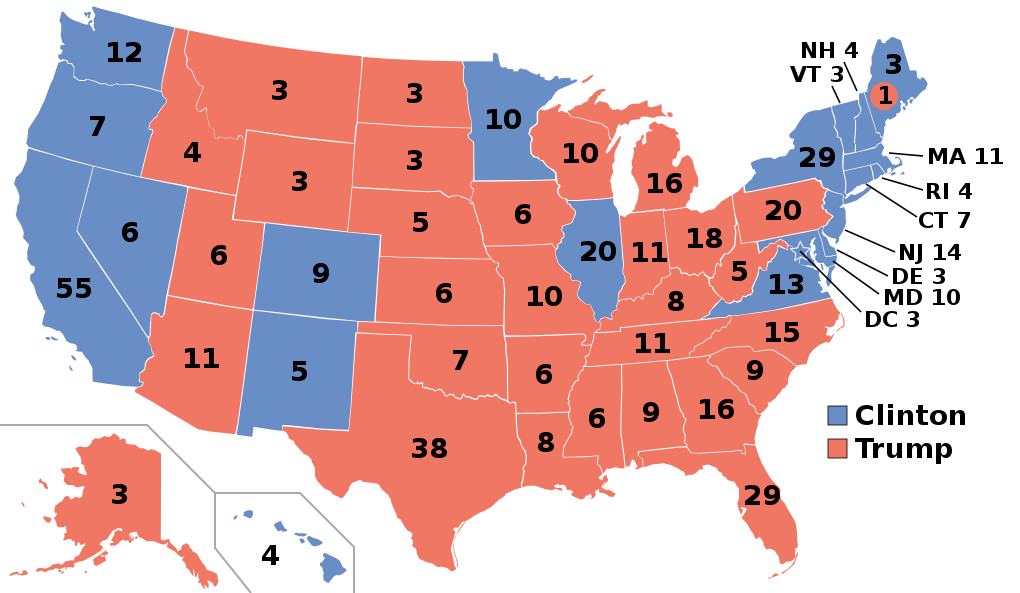 In this week’s Advocate chat, we wanted to discuss that lovable group of people whose votes actually count — the Electoral College! Has its time to go the way of other outdated American institutions (i.e. slavery) finally come? As always, the chat has been lightly edited.

petevancini (Pete Vancini, staff writer): Woo, OK. All set up with my anti-hangry mac n’ cheese and ready for a lively discussion of the Electoral College.

kristinpalpini (Kristin Palpini, editor): I wrote the horns for the Electoral College (Check back soon for the 2016 Halos and Horns! Here’s last year’s.), so I’m all set to go — You had one job to do Electoral College: Swoop in like a bunch of superheros and save America from being tortured by a madman and deliver us into the arms of hunky Hillary Clinton. And you failed spectacularly. The Electoral College was developed in the 1700s by the Founding Fathers as a safety valve for elitists worried that large groups of uninformed voters would elect an idiot to the presidency. The popular vote would take place, the FFs reasoned, and then, informed by the outcome, the Electoral College would cast ballots for president.

hunterstyles (Hunter Styles, arts editor): Thanks KP for the historic context. It’s somewhat amazing to me that this mechanism exists, and how much scrutiny it’s gotten this year, for obvious reasons. Usually it’s all but overlooked. I also love the phrase “faithless electors.” Should be a band name.

kristinpalpini: Prior to 2016, there had only been about nine instances of electors voting against the will of the people — none of these renegade votes influenced the outcome of an election. It’s a largely useless, harmless system.

hunterstyles: These 538 people are quite the microcosm of the larger voting body. A supercharged version of the question most of us ask ourselves: will our vote make a difference?

dave.eisen (Dave Eisenstadter, web editor): Why do you think it is that electors are “faithless” so seldom? Maybe those people are selected because they are unlikely to change their mind?

petevancini: They’re made up largely of the party faithful, if I’m not mistaken. So I guess that’s the case.

kristinpalpini: I think this year there were 16 defectors? I could be wrong on that numbers. They voted for Colin Powell, a protester at Standing Rock and Bernie Sanders.

dave.eisen: No, there were only 7 that I saw, and most of the faithless ones were on the Hillary Clinton side. One voted for Sanders, three for Colin Powell, and one for… it was a Native American leader…. Looking it up…

kristinpalpini: Oooo I was way off.

dave.eisen: Faith Spotted Eagle. Here are the results. Two Trumpers voted for someone else: both in Texas (go Texas!). One was for John Kasich and the other was for Ron Paul.

petevancini: Wasn’t there an Arizonan defector too?

petevancini: Ah, OK. Thanks, Dave. Arizona has a law on the books that makes it punishable by jail time for an elector to vote against the will of the voters

hunterstyles: Couldn’t some states simply replace a faithless elector with a new elector?

kristinpalpini: Some did. Two possible Hil defectors were replaced.

dave.eisen: There were definitely some Trump defectors who were replaced as well.

kristinpalpini: The Electoral College has proven itself unwilling to fulfill the elitist — and damn cynical — intent of the Founding Fathers and unwilling to vote with the will of the people. Such a bizarre, useless, and now we know untrustworthy system needs to be put to bed.

dave.eisen: I feel like this was a pretty easy choice, at least based on Alexander Hamilton’s argument for the EC.

From Federalist Paper 68: “The process of election affords a moral certainty that the office of President will never fall to the lot of any man who is not in an eminent degree endowed with the requisite qualifications. Talents for low intrigue, and the little arts of popularity, may alone suffice to elevate a man to the first honors in a single state,; but it will require other talents, and a different kind of merit, to establish him in the esteem and confidence of the whole union.”

dave.eisen: So… Hamilton was pretty wrong there. Low intrigue and those little arts DID elevate Trump to the office of the president THROUGH the Electoral College.

petevancini: So what does everyone think about a wider adoption of a proportional electoral system (like Maine and Nebraska), as opposed to winner take all? And why isn’t that uniform across the board?

hunterstyles: I think it’s insane that we don’t go proportional.

petevancini: I agree completely. The winner take all system results in one person’s vote being worth drastically more than another person’s depending on where they live. Seems undemocratic.

dave.eisen: I think the proportional system is hugely problematic because Republicans have drawn all of the congressional district lines (except in Massachusetts).

kristinpalpini: Won’t someone please think of the democracy!

dave.eisen: But is there a fair way to give proportional votes? And if not, why not just go with the popular vote total?

hunterstyles: I also think we need a ranked voting system, but that’s probably for another chat.

dave.eisen: Ranked voting, yes! Can you explain that Hunter?

hunterstyles: Ranked voting allows each individual voter to list their choices in descending order of preference. In other words, it would allow a more accurate aggregated picture of everyone’s true preferences across multiple scenarios. E.g. maybe you’d prefer Bernie over Hillary but not Trump over Hillary. Simplistic example but that’s the idea. It diffuses fuck you voting a bit, as well.

petevancini: Interesting idea. I have to admit I’m still a little uncertain how that could be put into practice. That’s my problem though. haha

hunterstyles: It would require a complete overhaul of, like, everything.

petevancini: Hunter, sounds like just what the doctor ordered.

dave.eisen: Actually, all you need is a really unpopular executive. Look at what happened in Maine after Paul LaPage won two terms as governor. They went for ranked voting this year.

petevancini: O’ Canada! Here is a Pew Research article about how the Electoral College sometimes doesn’t match up with the popular vote.

dave.eisen: The major arguments I’ve heard in favor of the Electoral College are that 1) it helps give smaller states and rural areas more of a voice in the voting process and 2) that it is the system we have and it would be impossible to change. But the way I see it, you’re giving smaller states and rural areas more of a voice at the expense of urban areas and larger states… where most of the people live! As for the second argument though… it is difficult to see how we get from here to there… even if there is widespread voter belief that we should ditch the Electoral College.

petevancini: So the second argument is basically, “meh.”

petevancini: Haha, it’s true! I have to admit that it seems pretty daunting to overhaul the Electoral College at a time when the country so polarized.

dave.eisen: I think that if Trump winds up being really REALLY bad, we will look at the Electoral College seriously. But if not, then… I dunno, probably not….

petevancini: It’s worked to the benefit of two Republicans now in the last three elections, so it’s hard for a lot of people not to see it as a partisan issue I think.

dave.eisen: If it was a benefit to Democrats, do you think we would be having this discussion? Like if Hillary lost the popular but won the EC?

petevancini: That’s an interesting question. I’m not really sure, but I’m inclined to say yes. We as a country I mean.

hunterstyles: I’d like to think so, but who knows.

kristinpalpini: If Hill won the Electoral College we wouldn’t be talking about it. If she won, it’d be business as usual.

dave.eisen: Well, if we wouldn’t be talking about it, can we really expect the republicans to consider it?

kristinpalpini: Oh, no, they never will. Controlling the vote is their bread and butter: voter id laws, the Electoral College, gerrymandering, fake news.

petevancini: Yes! Gerrymandering is the whole reason the electoral college needs to be reformed. That gulf between the popular vote and the EC is steadily widening it seems. All you have to do is take a look at who’s drawing the lines.

dave.eisen: OK, if the people in this chat were in charge, what would the system look like?

kristinpalpini: Rank it and run off

dave.eisen: And I also think it should be the popular vote

petevancini: Yeah, ranked seems like a good option. Let’s give it a shot.

dave.eisen: Hunter had the idea that we should make Trump “king.”

kristinpalpini: My hope for the next four years is that Trump and his cabinet can’t stay out of each other a way and it’s a pointless cluster fuck

hunterstyles: I’m just hoping that in four or eight years we are not trying to figure out how to get him to agree to step down. That would be no less crazy than anything else that’s happened.

petevancini: Yeah nothing would surprise me at this point.

dave.eisen: Yes, that is a definite possibility. Ugh. OK, so basically the Electoral College, and by extension Alexander Hamilton, ruined everything. So… #boycotthamilton?

petevancini: There’s a hashtag we can all get behind now.

petevancini: Wow… 82,000 votes. That in itself is a strong argument for reform.

dave.eisen: Before everyone goes, let’s vote on what we should do with the Electoral College, but rather than have everyone’s vote count equally let’s make it complicated and create a system by which the majority doesn’t always carry the day. Who’s with me?

petevancini: I would totally vote for an elector to vote against that proposition.