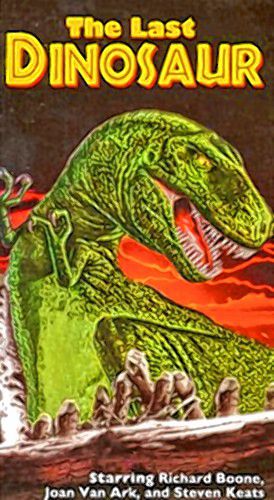 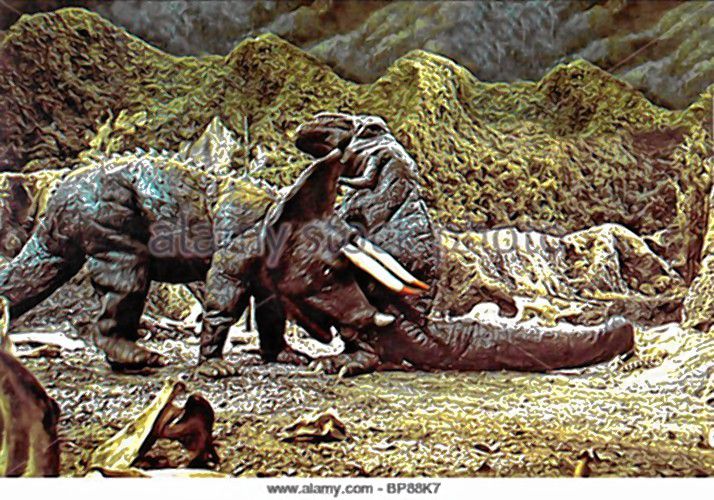 Many winters ago, in 1977 to be precise, a friend and I were invited to a party. As luck would have it, we were the only males present. To top it off, the girls wanted to try the old game of spin the bottle. Chumps that my friend and I were, we decided we would rather catch the premiere of a movie on TV called The Last Dinosaur. Mind you, this was way before the days of cable, or even VCRs, so our feeble minds thought this was a big event.

The film opens with Nancy Wilson singing a stirring rendition of “The Last Dinosaur,” then goes downhill from there. Maston Thrust (Richard Boone) is a rich tycoon and big game hunter. He is also pompous and arrogant, and has a face so craggy it resembles the surface of Mars. For some reason, lovely ladies swoon over him, but none of them meet his high standards.

On to the plot: one of Thrust’s oil company’s expeditions into the Arctic ends in disaster. Sole surviver Chuck (Steven Keats) claims the crew was devoured by a T-Rex. Thrust prepares to explore the hidden valley using a contraption that looks like a trash can merged with a pneumatic drill (it’s called a “polar borer”). Along for the ride is sole survivor Chuck and a Japanese scientist (obvious dino fodder).

Thrust then introduces a fellow named Bunta, purportedly the best African tracker around. Bunta doesn’t speak, but his weapon of choice is — wait for it — a spear. Photojournalist Frankie (Joan Van Ark) wants to go, but chauvinist pig Thrust say NO! Frankie regales Thrust about her rifle collection and he remarks that her perfume smells like gun-cleaning oil, after which he is thoroughly smitten. It’s as odd a romantic pairing as John Travolta and Lily Tomlin.

Our cast finally arrives, and is subsequently stranded in the lost valley.

This film is a collaboration between the American production company Rankin/Bass (think “Rudolph” Christmas specials) and Japan’s Tsuburaya Productions (responsibe for “Ultraman”), so the dinos are either puppets or actors stumbling around in costumes like drunken Godzillas. At one point, an actor in the front half of a triceratops suit falls, leaving the actor in the butt half momentarily dumbfounded.

Our heroes encounter a group of cavemen and befriend a cavewoman they name Hazel. The repugnant Hazel wants some primitive love from the irresistible Thrust, but he wisely declines. While Hazel is helping Frankie wash her hair, the T-Rex returns. Bunta confronts the beast with his spear. Bunta gets eaten. Not a good day to be Bunta.

The castaways construct a huge catapult out of wood, and use it to bean the T-Rex on the noggin with a huge boulder. The rock puts a huge dent in T-Rex’s obviously fake head, but only slows him down. In the wake of the destruction, Frankie states that they have to leave now or they will be stuck in the valley. She pleads with Thrust to go with them, but Thrust wants to stay and hunt his nemesis. Frankie remarks that the dinosaur is “the last of its kind.” Thrust replies, “So am I.” The others leave and Thrust remains, as Hazel makes goo-goo eyes at him. Thrust realizes he might have made a mistake.

So was it worth it, missing out on spin the bottle? At the time, heck yeah! Even my mom watched the film, and thought it was hysterical. But forty years older, as I watch my beat-up VCR tape, I have to ask myself: what was I thinking? Maybe I, too, am the last of my kind.